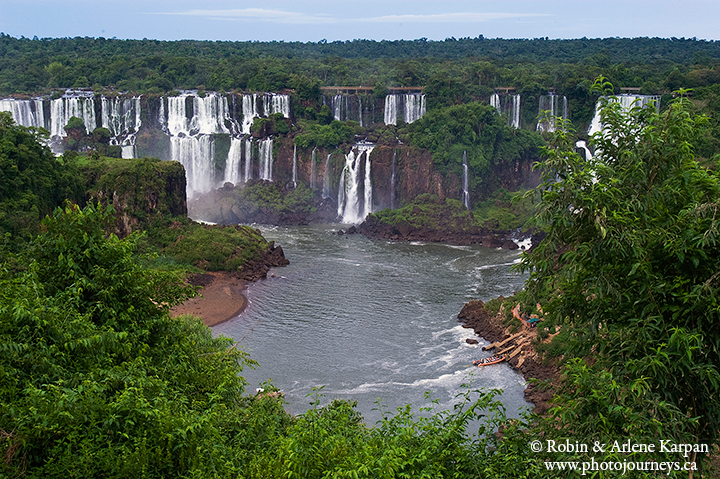 We’re surrounded by a fairy-tale landscape of multi-layered cataracts, interspersed with basalt cliff faces and deep green, jungle-like rainforest. Iguazu Falls is so expansive that every time we round a corner on the network of paths, we’re faced with yet another stunning scene. Iguazu boasts a string of superlatives, from UNESCO World Heritage Site, to being chosen as one of the New 7 Wonders of Nature in a world-wide vote in 2011.

What sets Iguazu apart from other famous waterfalls is that this is not just one wall of water, but a series of 275 separate cataracts that stretch for almost three kilometres. The wide Parana River takes a sharp curve, flooding a huge area resembling a small lake, then plunges 80 metres over a horseshoe-shaped fault line. The falls straddle the Argentina/Brazil border with national parks and visitor facilities on both sides.

Most falls are on the Argentina side, where it is generally easier and cheaper to visit. The tourist town of Puerto Iguazu has plenty of accommodation and other services, and is close to the park. We walk trails and boardwalks above the tops of falls where we peer over the drop, then follow paths along the base of the walls of water, and to intermediate levels where we’re doused by constant spray. If that’s not wet enough for you, boat trips head right underneath the falls for a proper soaking.

The highlight is at the far end of the park, reached by a 20-minute trip on a miniature railway (included in the park admission fee), not much bigger than a kids’ amusement park ride. At the end, we follow a kilometre-long walkway right over the river to the Devil’s Throat. An observation deck looks over the brink and into the depths of the narrow end of the powerful crescent-shaped 80-metre drop. The awesome force of the water, deafening roar, and clouds of spray add to the devilish aura.

You can visit the falls from either the Argentina or Brazil side, so the question always arises as to which is better for photography. Each has its advantages. The Argentina side has more pathways and places where you can get up close to the falls, the highlight being the lookout right on the lip of the Devil’s Throat. The Brazil side, on the other hand, is better for getting grand overviews of the falls. The opening photo on this post, for example, is of the falls on the Argentina side, but taken while standing on the Brazil side. The obvious solution is to visit both, if possible. Visa requirements for crossing between Argentina and Brazil varies according to your nationality, so check on this in advance.

Wide angle lenses are very useful here, especially on pathways where you can get immediately beside some cataracts. Polarizing filters are practically a must, especially to cut through the glare on the water.

While waterfalls are the obvious photo subject, other possibilities abound. The river is lined by sub-tropical rainforest, where trails run through stands of bamboo, palms, and mixed woods. An array of birds and butterflies abound, and the occasional capuchin monkey peeks through the canopy. Signs showing a coiled snake don’t need any translation, making it clear that you should stay on the trail. Seeing coatis is practically guaranteed. These sly, raccoon-like critters with long tails and pointy noses are notorious for trying to snatch your food if you’re not watchful.

Iguazu’s most iconic wildlife is the Great Dusky Swift. These small birds constantly dart around the falls, then suddenly seem to disappear. They fly right through the torrents of water to roost and nest on the cliff faces behind the falls. Curious behaviour at first glance, but it’s the ideal haven where no predators can reach them.

Most important, allow enough time to fully explore the vast area that the falls cover. We spent two days on the Argentina side, and one on the Brazil side. Less time than that would have been too rushed. In fact, allowing an extra day in case of the rain (highly likely) wouldn’t be a bad idea. If you plan to spend a second day in the Argentina park, get your ticket validated before you leave, and the second day is half price.

2 thoughts on “Iguazu the Ultimate in Waterfall Photography”