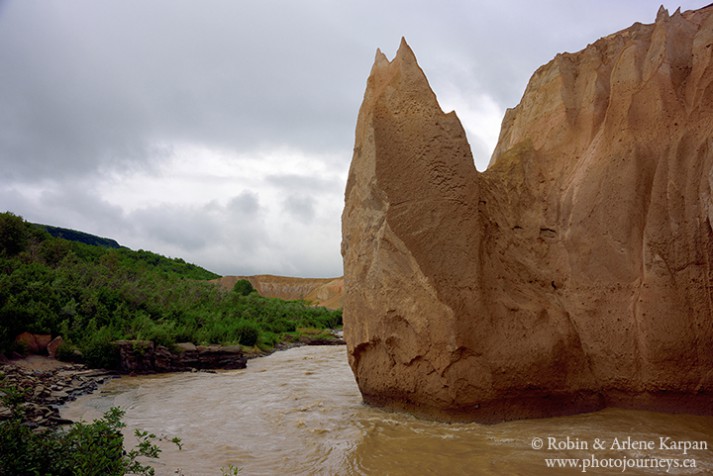 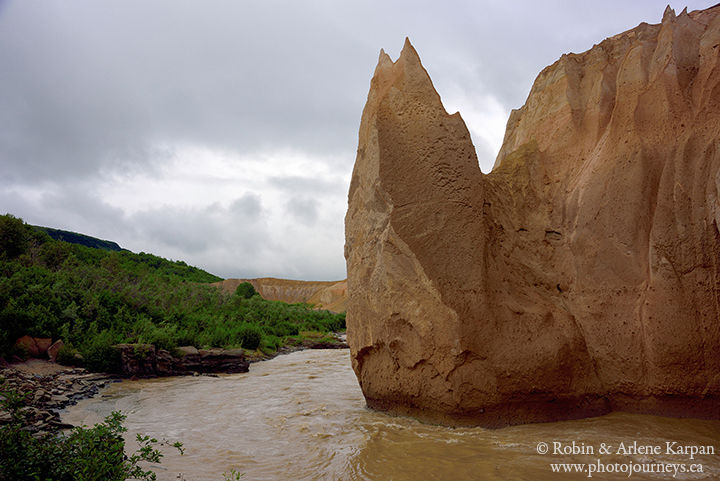 We’ve never seen a landscape quite like this. The strange cliff formations lining this river are made of volcanic ash, compacted for a little over a hundred years. This bizarre terrain in Alaska’s Katmai National Park is the result of the largest volcanic eruption to take place during the 20th century, anywhere in the world, and among the five largest in recorded history. The amount of ash and pumice it spewed into the air was 30 times greater than Mount St. Helens, and three times greater than the monstrous Mount Pinatubo explosion in the Philippines. 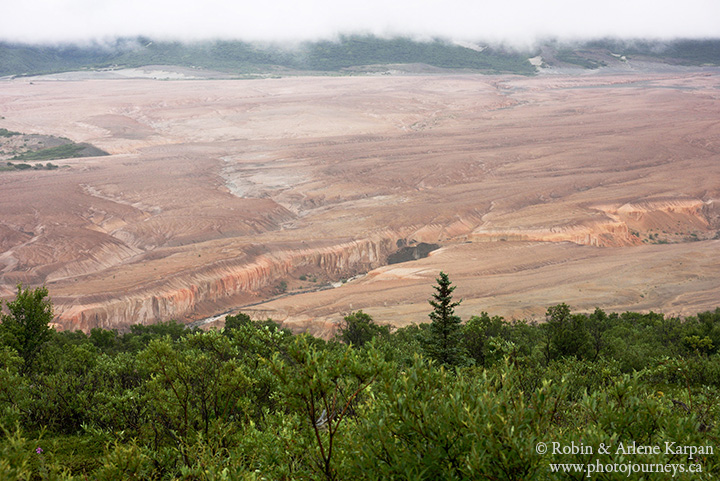 If you haven’t heard of it, you’re certainly not alone. When the eruption took place in 1912, this was a very sparsely populated part of the world, so the amount of disruption it caused to peoples’ lives was minor compared to most of the world’s major volcanic explosions. The first expedition to explore the source of the eruption found the valley covered in steaming fumaroles, so they dubbed it the Valley of 10,000 Smokes. 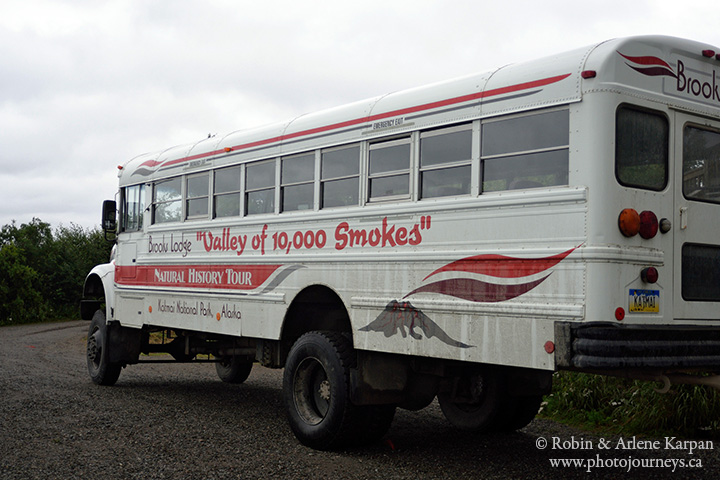 We visited the valley on a day trip while staying at Brooks Camp to photograph bears (the subject of our last two postings). While Katmai National Park isn’t connected to the outside world by roads, it has one minor interior road running from Brooks Camp to the Valley of 10,000 Smokes. A tour runs each day using a modified school bus with a raised chassis and large tires to ford the shallow creeks along the way. It’s about an hour’s drive through spectacular wilderness to the hilltop lookout over the valley. Between the mountain slopes lies a broad red plain, incised by deep cuts, almost as far as we can see. The “plain” is actually ash and pumice that flooded the valley. 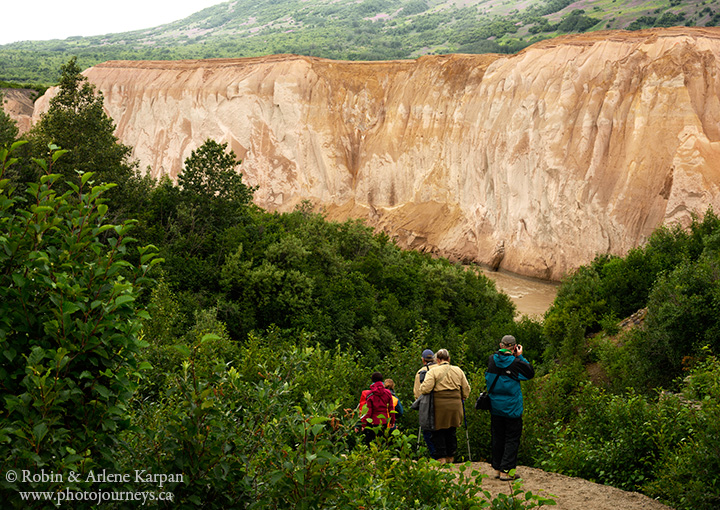 A park ranger led us on a hike into the valley, and along the Ukak River where one bank is lined with high cliffs made of compacted ash which, at a distance, almost looks like sandstone. Heat from the fumaroles baked and stained the ash in places, leaving it with splashes of bright red and other colours. It’s a stunning setting, looking over the extraordinary terrain of ash with a backdrop of fireweed-covered mountain slopes. It has even more impact when we realize that this was site of one of the world’s most dramatic geological events. 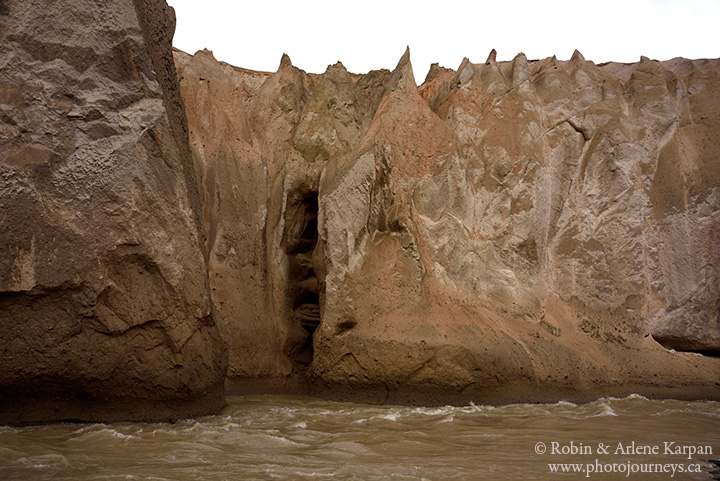 We didn’t go to Brooks Camp with the intention of doing the 10,000 Smokes trip. We were there for the bears and debated whether or not to take time away from that fascinating spectacle. Since we were staying for four days, we decided to go on the trip (fortunately, there was space available on short notice) and were we ever glad that we did. As a bonus, the trip returns to camp in late afternoon, so we still had plenty of time with the bears during the long summer evening. 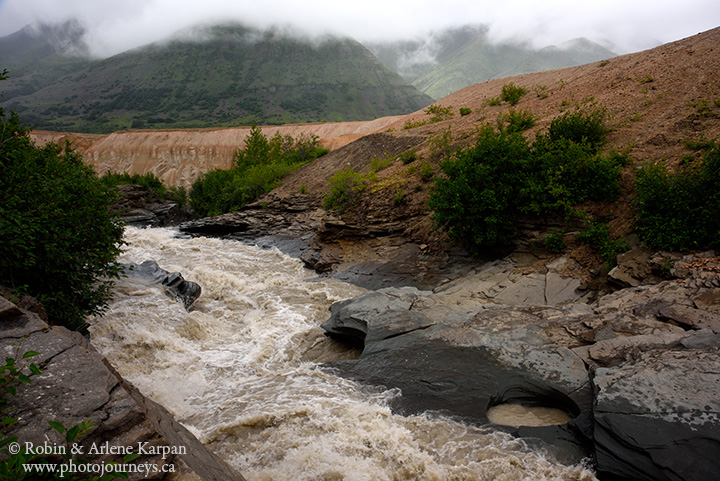 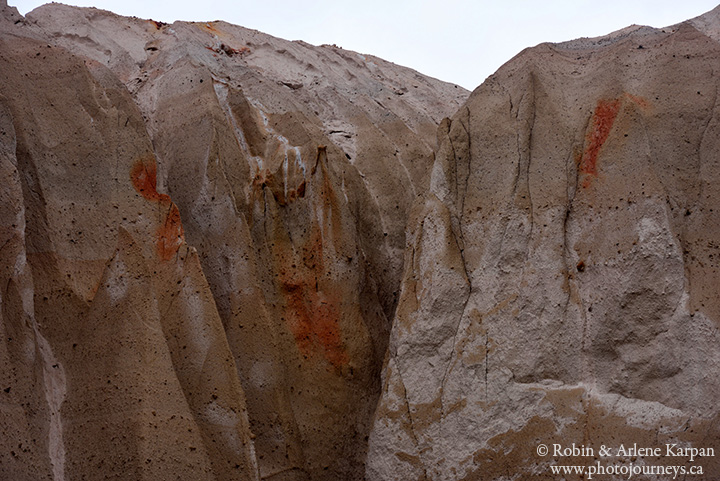 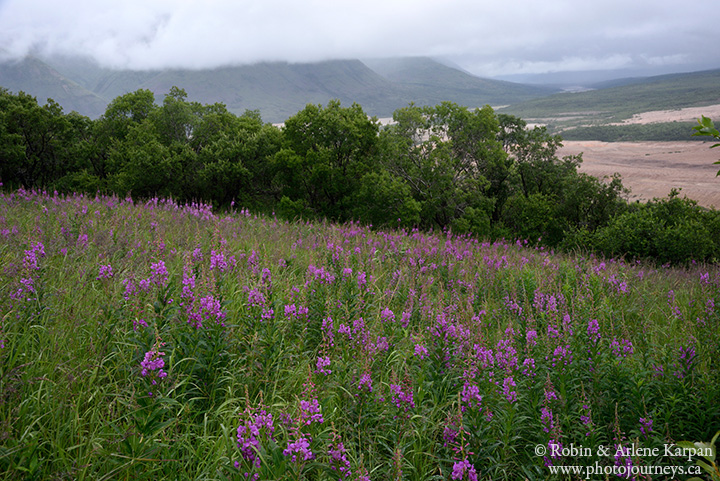