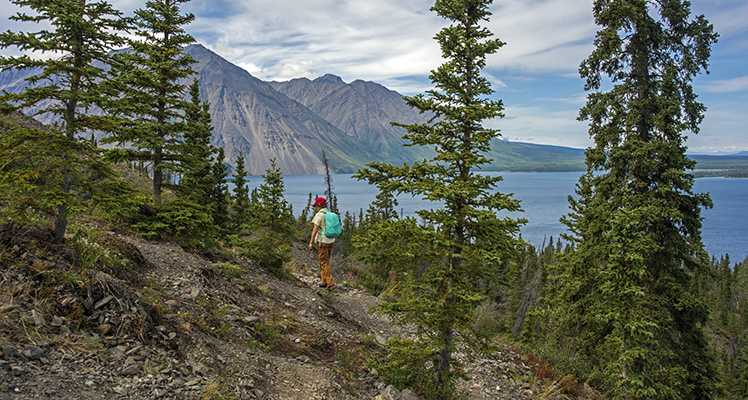 Sprawling across south-western Yukon, Kluane National Park has some of Canada’s most spectacular hikes. The park is home to the world’s largest ice fields outside the polar regions and many of Canada’s tallest mountains, including the Big Daddy of them all – Mount Logan – the country’s highest at 5,959 metres. Add wild rivers, glaciers galore, and abundant wildlife, and it’s easy to see why Kluane is part of a UNESCO World Heritage Site.

Despite being a wilderness park, getting to Kluane is fairly straightforward, thanks in large part to the Alaska Highway and the Haines Highway that run along much of the eastern edge of the park. Access points off the highway lead to a number of trailheads. Some hikes are major, multi-day expeditions, and some are so rugged that they don’t even follow marked trails, but instead are suggested routes. Other trails are shorter, but can be quite difficult. But if you’re not up to difficult treks or overnight hikes, fear not, because Kluane also offers some great choices for easy day hikes that still provide a taste of this awesome landscape. 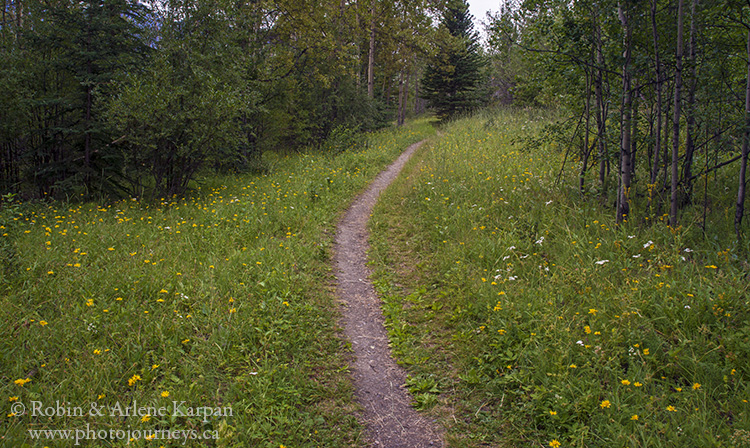 Meadow on the Dezadeash River Trail.

The small community of Haines Junction is the “centre” of the park. The Alaska Highway approaches from Whitehorse, then turns northwest along the edge of Kluane. From here the Haines Highway heads south, providing access to the southern part of the park. Your first stop should be the Parks Canada Visitor Centre in Haines Junction for information and updates on trail conditions and wildlife sightings. It is possible to encounter bears on any trail in the park, so it’s helpful to find out if there have been recent sightings where you intend to hike.

The Dezadeash River Trail starts on the south end of town. Covering a loop route of 5.5 km, this very easy stroll has almost no elevation gain. It follows the Dezadeash River, although most of the route is through aspen and spruce forest, with sections of meadow and lookout points over the river. 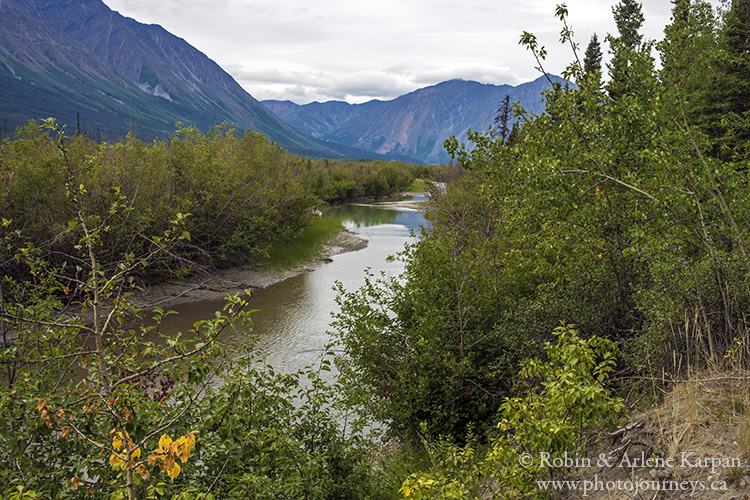 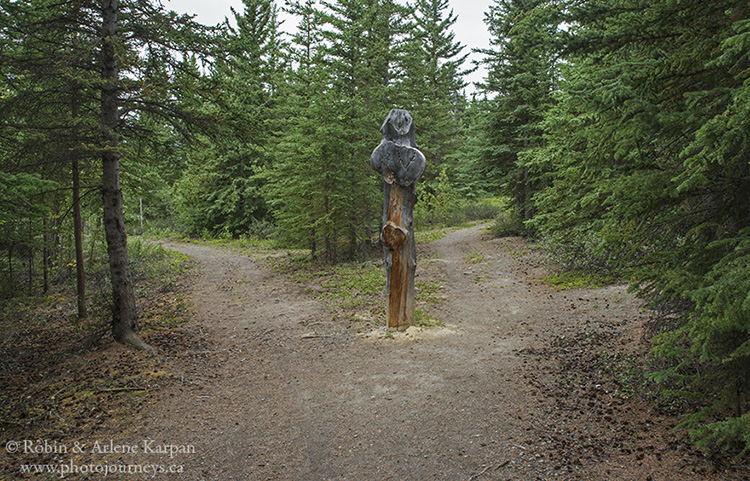 When you come to a fork in the road, take it! Actually, this gnarled tree marks the beginning and end of the loop portion of the Dezadeash River Trail.

Just 10 km to the northwest along the Alaska Highway, the Alsek River Trail follows an old mining road. The entire trail is a 52-km overnight return trip, however, you can simply go partway for a day hike along the mostly level trail.

Just a few kilometres farther along the Alaska Highway is the trailhead for the Spruce Beetle Trail, a short 2-km walk in the woods. This self-guided interpretive trail highlights the effects of the spruce beetle on the forest and how it contributes to the lifecycle of the boreal forest. 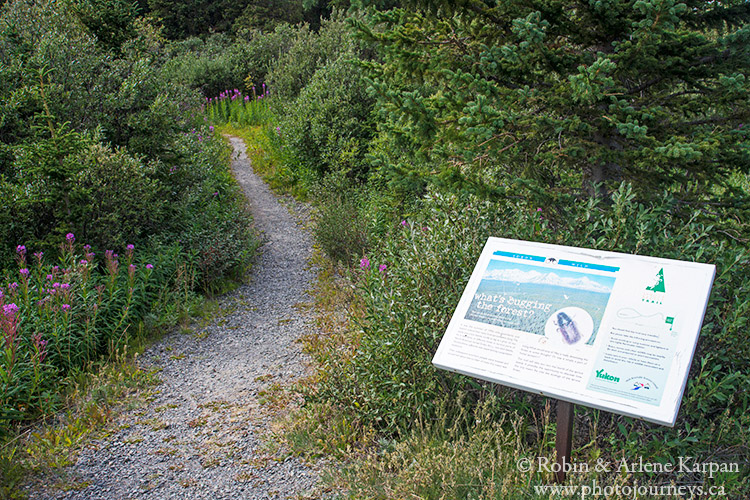 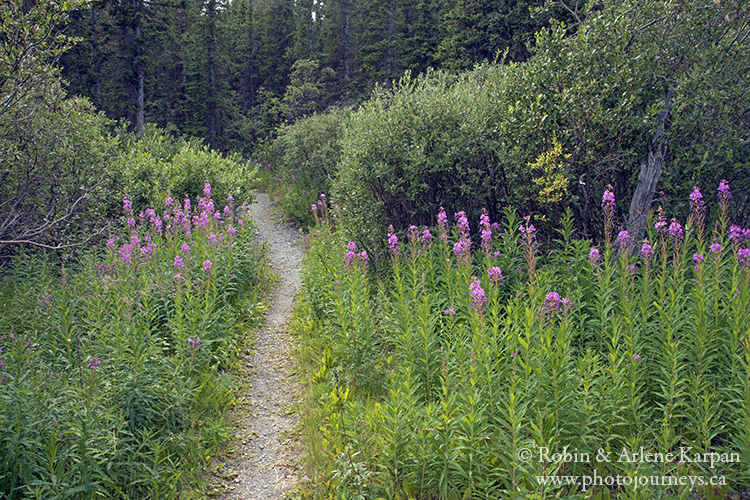 Located about 27 km south of Haines Junction along the Haines Highway, Kathleen Lake is an especially scenic area. For something very short, the Kokanee Trail is an easy 1-km stroll along boardwalk following the lakeshore. Interpretive signs provide information on the kokanee salmon that live in the lake. Look across the lake and you can see the trail for the King’s Throne Hike that winds up the mountain to an area likened to the seat of a giant throne. 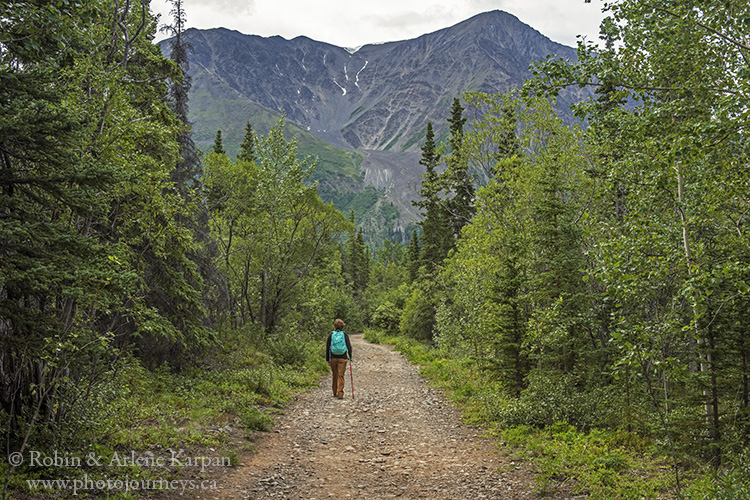 The first part of the King’s Throne Trail follows an old road. 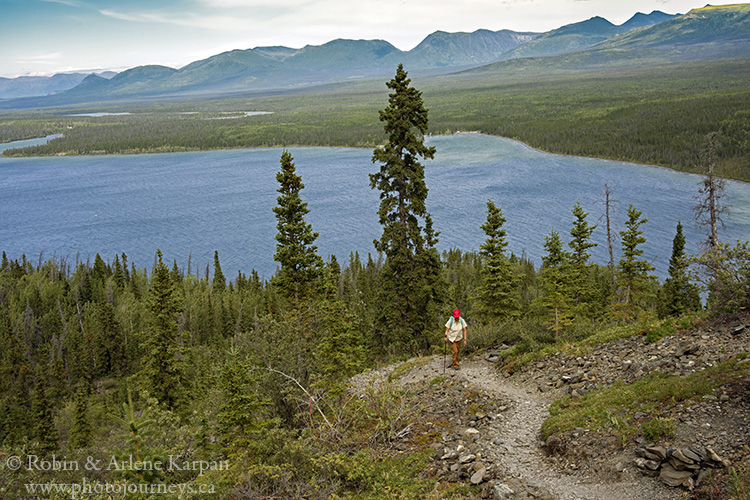 The park rates King’s Throne as a “moderate” rather than an easy hike. It’s a 10-km return walk, with a fairly steep 548 metre gain in altitude. However, the first section is not especially difficult, so you could opt to go only partway. It starts on an old mining road along the lake then climbs up switchbacks. At first, the trail winds through the forest, but before long you emerge from the trees and the view opens up. While the views keep getting better the higher you go, you still get some spectacular vistas even if you go partway.

Slightly farther south at Dezadeash Lake, Rock Glacier Trail packs a lot of variety into the 1.6-km return trip. From the trailhead off the Haines Highway, the walk starts on a raised boardwalk that crosses a marshy area, then goes through a short section of forest. All of a sudden the forest ends as you climb a short stairway onto the toe of the rock glacier. From here, the trail winds over jumbles of pure rock. Interpretive panels tell you about rock glaciers, such as “rock waves” where the surface buckled into undulating ridges as the rock mass flowed down. A bonus is the panoramic views over Dezadeash Lake. 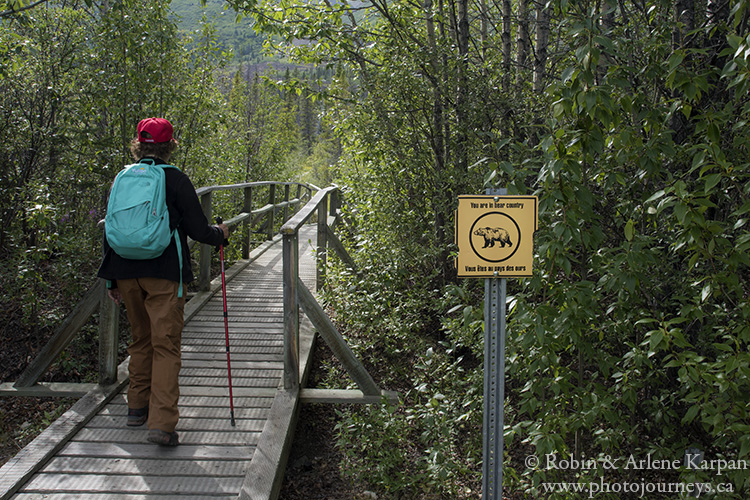 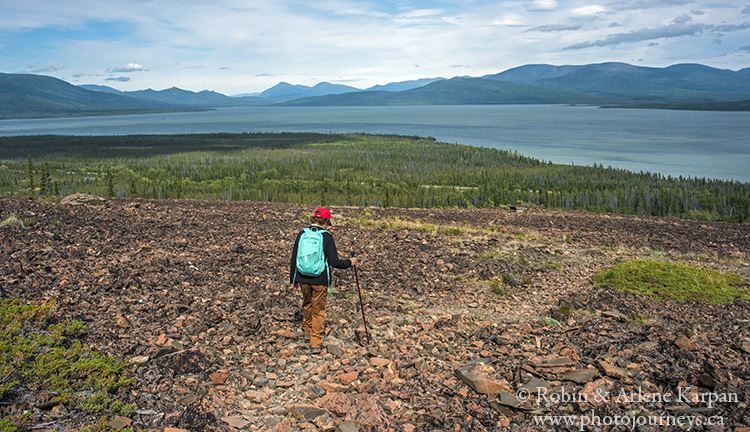 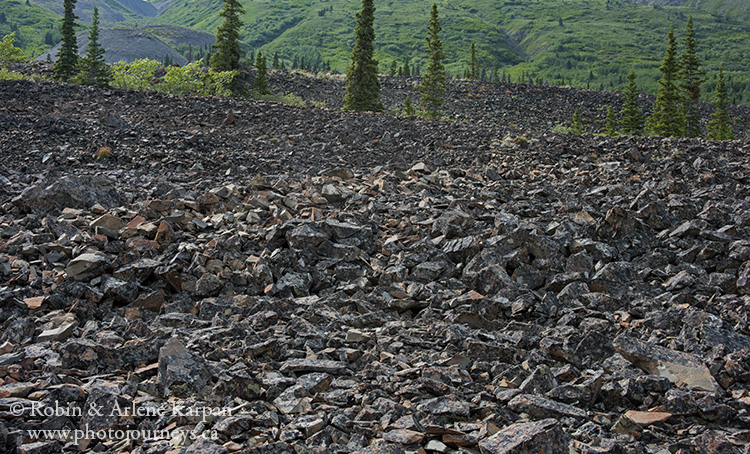 “Rock waves” caused by buckling of the rock glacier.

Farther north along the Alaska Highway, Kluane Lake is the largest lake in the park and home to another, though smaller, visitor centre. Spotting scopes on the veranda can help you locate Dall Sheep that often travel along the rocky slopes.

The easy and popular Soldier’s Summit Trail differs from other park trails in that its main focus is history – although the scenery ain’t so bad either. The 1-km return walk takes you to the spot where, in 1942, ceremonies were held for the official opening of the Alaska Highway. A series of interpretive panels talk about the building of the highway and the profound effect it had on the land and people. At the peak, there’s a viewing platform, Canada and USA flags, and commemorative plaques. The spot is also an excellent vantage point over the mouth of the wide, silt-laden Slims River, as it flows from Kaskawulsh Glacier, just out of view upstream, and into Kluane Lake. Enjoy the view from Parks Canada red chairs. 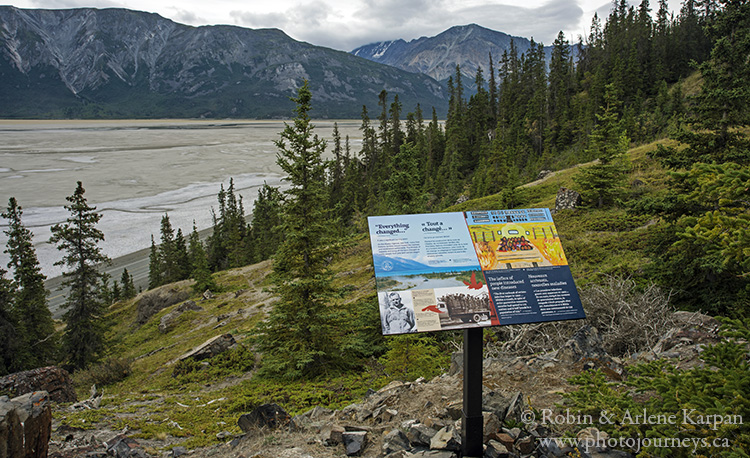 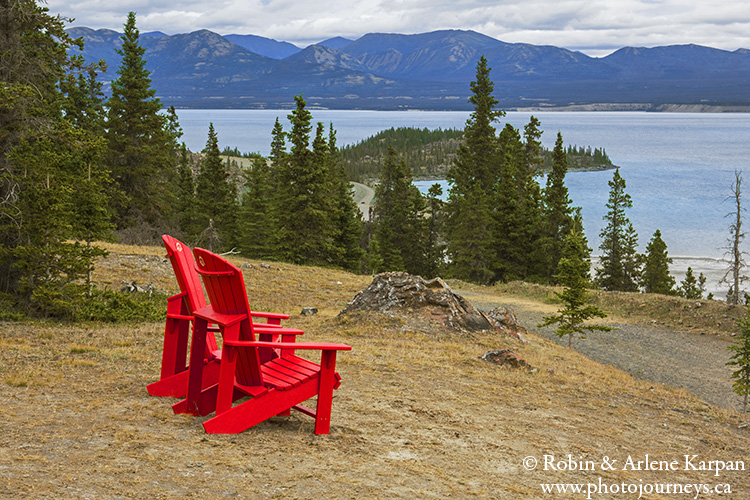 Other hikes in this area are rated as “moderate” or “difficult”. The very popular Sheep Creek Trail is a 10 km-return hike, rated as “moderate”. It has a 430-metre gain in altitude, but you can choose to go only partway to the first viewpoint, about 2 km along.

These are just some of the hiking possibilities in the park and surrounding area. There’s more information on the Parks Canada website and through Travel Yukon.

NEXT TIME: Where to stay when visiting Kluane National Park. 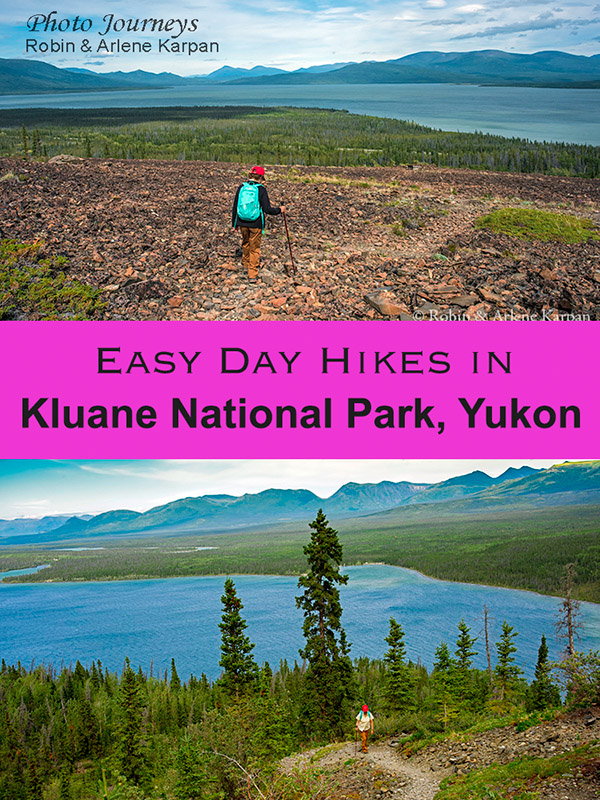