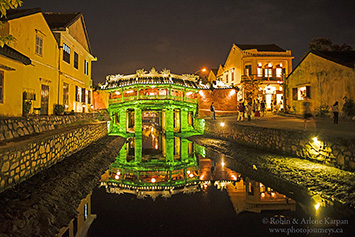 We passed field after field of rice, corn, taro root, and practically every other imaginable vegetable and herb. Most striking was the intensity of agriculture, and how immaculately everything is kept, especially considering that so much work is done by hand. Riding bicycles through the countryside isn’t the reason we came to Hoi An, but it turned out to be the highlight of our visit.

Hoi An sits about mid-way down long, thin Vietnam, about a half-hour drive south of the city of Danang. From the 15th to 19th centuries, this major port in Southeast Asia drew influence from throughout the region. Traditional Vietnamese architecture melds with mustard-coloured Chinese shophouses, temples and pagodas, age-old private houses preserved as museums, and an ornate 18th-century Japanese bridge — Hoi An’s iconic feature. The ancient architecture is so well preserved that the entire old sector is a UNESCO World Heritage Site.

Though Hoi An is solidly on the tourist circuit, it manages to retain an easy-going charm. It’s small enough to be spared the chaotic traffic that plagues Vietnam’s big cities, plus much of the old town has pedestrian-only streets. Like most of Vietnam, your money goes a long way here. Our comfortable small hotel cost around $35, including breakfast. Food is not only cheap but excellent, with many tourists staying specifically to take cooking classes. We became captivated with the place; we arrived intending to spend three days, but ended up staying a week. 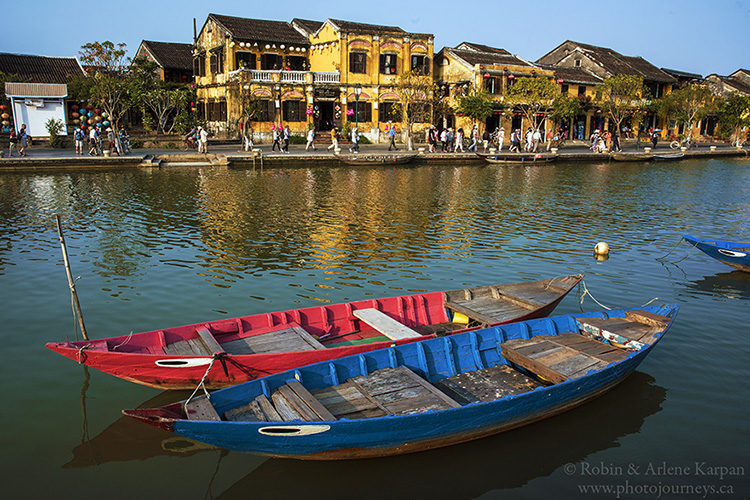 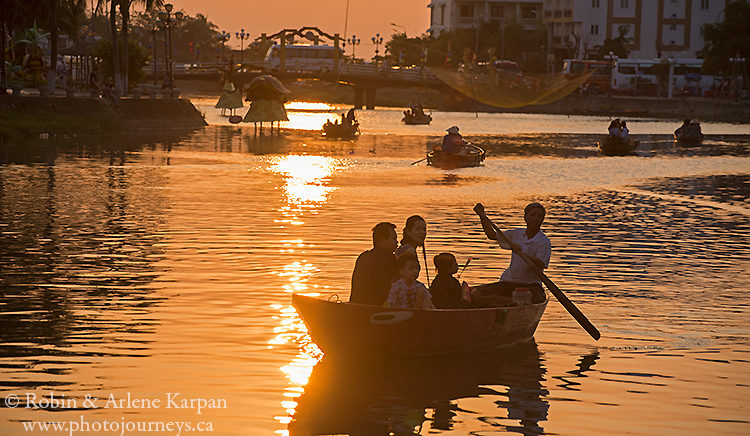 Hoi An is synonymous with traditional lanterns, made with a flexible bamboo frame and covered in silk and other fabrics of every colour. Thousands line the streets of old town, making for a magical ambience when lit every evening. 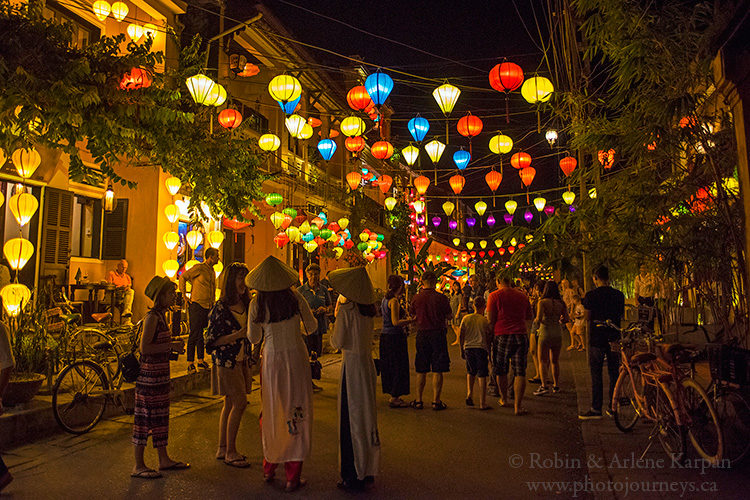 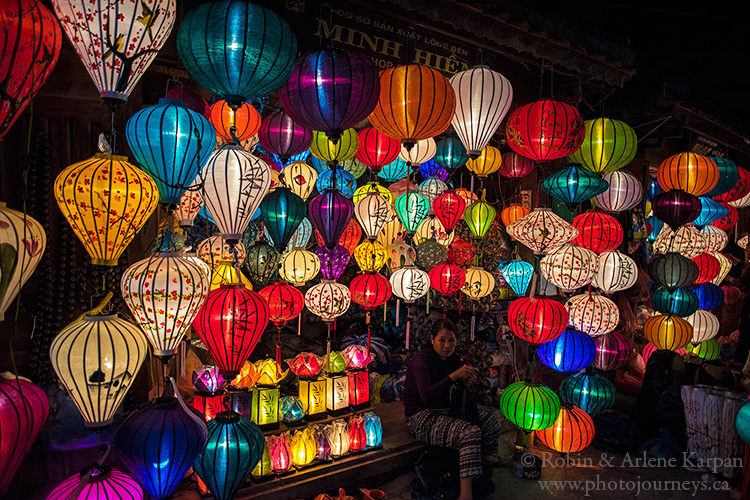 As a result of coincidence rather than good planning, we discovered that we would be in town for the Lantern Festival, taking place every full moon. That evening, tourist numbers seemed to double, at least 95 percent of whom were from other parts of Vietnam or other Asian countries. Street vendors out in full force sold small paper boats fitted with candles. The tradition is to make a wish, light the candle, then set the paper boat free on the water. Tiny lights flickered in the calm water among the flotilla of narrow sampan boats carrying tourists. Most intriguing were young couples, probably newlyweds, dressed in fancy outfits, who hired boats and photographers to document their visit.

What really made our stay enjoyable was exploring the surrounding countryside. The shop beside our hotel rented bicycles for $1.50 per day. One day we peddled about five kilometres to the beach, and another day explored minor roads along the river and canals. But the highlight was crossing the narrow bridge, meant only for bicycles and motorbikes, to the other side of the river, and entering an entirely different world. This was farm country. Only one road was wide enough for cars, of which there were few, but a maze of narrow paths for bikes and motorbikes crisscrossed the area to access crops and vegetable plots. People wearing traditional Vietnamese conical hats busily watered, hoed, or otherwise tended their plots.

Unlike Hoi An, where almost everyone in contact with tourists spoke some English, here almost no one did. Yet everyone was friendly, waving as we went by. At a tiny corner shop, we bought fresh coconuts to drink; language was no problem — the smiling lady just showed us how many coins we needed. 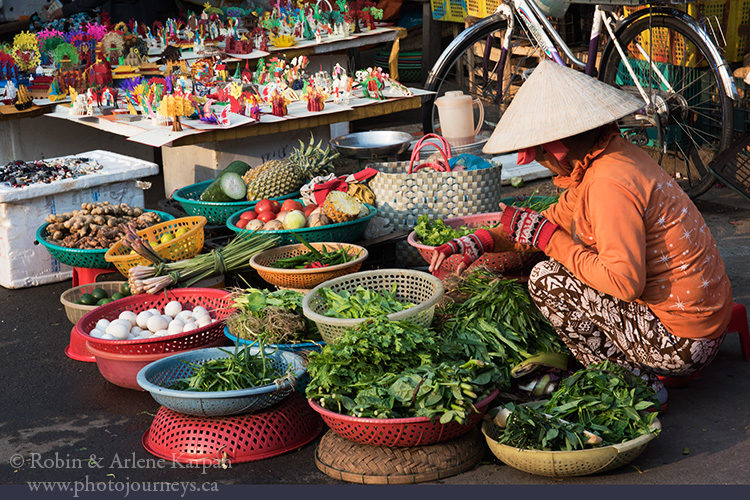 Another time we stopped near a house to look at rice drying on mats in preparation to make rice noodles. A man soon came out and insisted on giving us a drink of cold water before we left. We spent the better part of two days simply wandering and enjoying a slice of rural Vietnam. 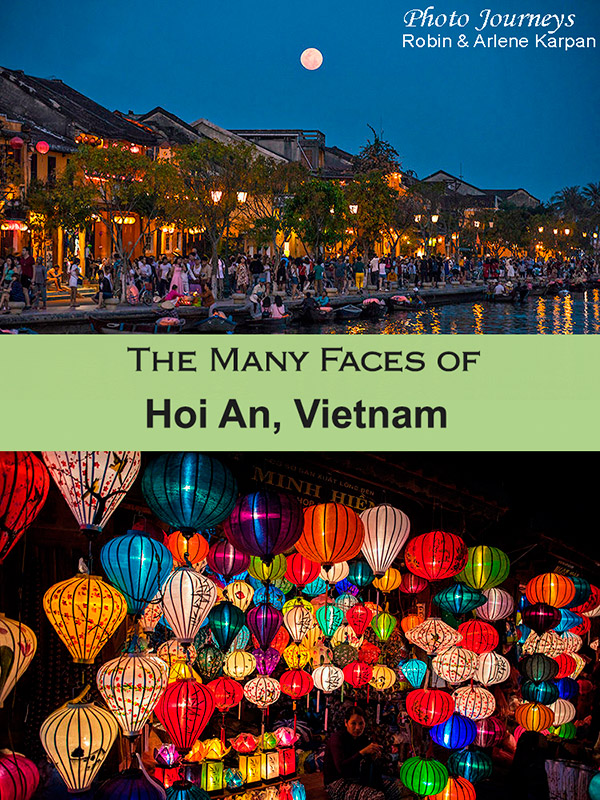