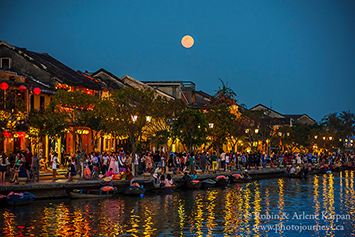 This week we’re starting a new segment on Photo Journeys called Getting the Shot. It’s a behind the scenes look at a specific photograph each time and what was involved in getting the image – why we took it, what attracted us to the scene, and technicalities such as camera settings and processing in putting it all together.

When we look at a finished photograph, it’s not easy to tell what took place in its creation. Sometimes all of the elements such as weather, light conditions, as well being in the right place at the right time, all come together and present us with the ideal opportunity. More often than not, we have to work at it, making compromises and trying different approaches until it works.

This time we’re looking at a night scene in Hoi An Vietnam. Last year we were fortunate to have this image win First Place in the Best Landscape or Evocation of a Place category in the TMAC (Travel Media Association of Canada) Awards.

The Art of Compromise

Hoi An is a beautiful historic city in central Vietnam. We were there during the Lantern Festival which takes place during the full moon and attracts a lot of visitors. As you can see, this photo dates to before social distancing was in vogue. For more details on this fascinating place, be sure to check out our posting the Many Faces of Hoi An, Vietnam.

What attracted us to this scene was the combination of the full moon, street scene, coloured lanterns, and reflections in the water. This is a prime example of the many compromises that are often necessary in challenging light conditions. For a night scene, the best is usually to do a fairly long exposure with the camera firmly on a tripod. However, the people are an important part of this scene, and most of them are moving around. So if the exposure was too long, the people would be blurred.

With the camera set on aperture priority, I opened the aperture as wide as it would go. The Nikon 70-300mm is a variable aperture lens, so when wide open the aperture varies from f/4.5 at 70mm to f/5.6 at 300mm. This is often our go-to telephoto lens when we have to travel light, since the lens is quite compact for the range that it covers. In this case I had the zoom set at 135mm, so it gave an aperture of f/4.8 when wide open. In ideal circumstances, it is best to stop the lens down to a bit smaller aperture (f/8 for example) to give more depth of field, but this would come at the expense of having too slow an exposure which would blur the people, or too high an ISO which would be very noisy. So this was the first compromise.

I needed a shutter speed that was fast enough that the people wouldn’t be blurred but not so fast that an extremely high ISO would be necessary, which would make the image excessively noisy. I found that 1/30 sec would stop the action for the most part. When we look closely, there is still some movement in the people, but an amount I considered acceptable – another compromise. For 1/30 sec, I needed to set the ISO at 1600, which produced noise in the image, but not so much that it couldn’t be reduced in processing – yet another compromise.

I ended up setting the exposure compensation to -0.7 EV, which means that it is two-thirds of a stop less than what the camera says is a correct exposure. Most of the scene is fairly dark and even the coloured lights are not excessively bright. The brightest highlights, the moon and the white street lights, don’t take up a large part of the scene so the camera light meter gets tricked into giving these areas less importance. Consequently, when I looked at the camera screen and the histogram, these highlights were being over-exposed – not the best since the moon is an important part of the image. By under-exposing slightly, these bright areas were saved from being blown out.

The scene was dark to begin with, plus the exposure compensation made the image darker yet. So the main job in processing was to open the shadows to bring back the details. As a general rule, it is easier to bring back the details to shadow areas than it is to try to salvage bright areas that are blown out. I also brightened the mid-tones to bring out more details in water reflection. The image was noisy, especially in the dark areas and sky, but it was possible to lessen this significantly during processing. Despite all of the compromises, we ended up with an image that we liked.

The moral of the story is to try different approaches. Often we have to experiment with angles and settings until we get the result that we want. For a more detailed discussion on exposure settings, check out our posting Take Control of Camera Settings for Better Photos

Feel free to PIN this article on Getting the Shot: Hoi-an 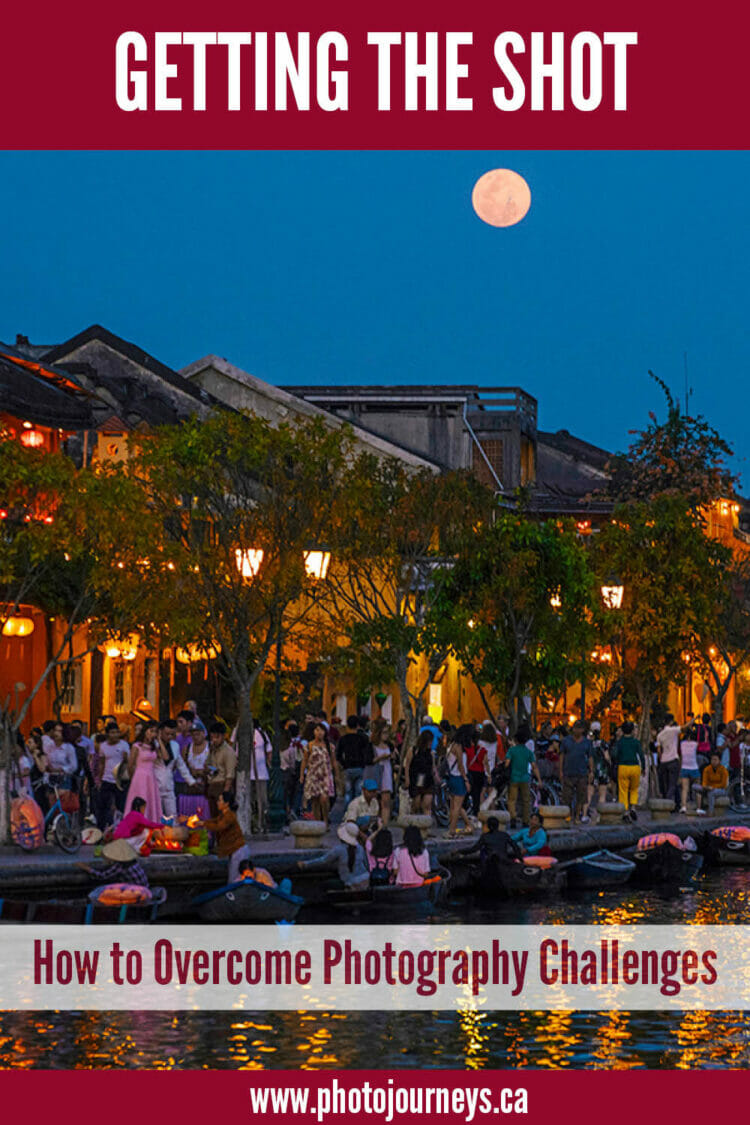