Robin & Arlene Karpan are travel writers, photographers and book publishers based in Saskatoon, Saskatchewan, Canada. We got hooked on travel back in our student days and basically never stopped wandering around the globe, eventually turning our interests into a full time business. For many years we have worked as freelance travel writers and photographers, contributing to well over 100 publications around the world, working on contract projects for business and government in the travel and tourism field, and selling stock photography.

In 1998, we founded Parkland Publishing and branched our business into book writing and publishing. We specialize in travel guides and photography books on our home province of Saskatchewan. Our book line-up also includes ebooks, available through ebook retailers around the world. We are fortunate that our books have been well received, some becoming bestsellers and winning awards.

While our work encompasses various aspects of travel, our specialty is the natural world, including nature and wildlife photography, visiting wilderness areas, hiking, canoeing, and travelling off the beaten track. Unfortunately, it is natural areas almost everywhere that seem to be disappearing the fastest. If the world’s special places and special creatures are to survive, it will be because people know about them and care about them. We hope that our work can play a role in raising awareness and fostering an appreciation of our many extraordinary places.

Our work has been well accepted by the public, leading to various types of recognition such as awards, nominations, and other accomplishments. Some examples include: Travel Media Award, 2018. Robin and Arlene with Troy Wruck, General Manager of Marketing Services with Vendasta who sponsored the award. 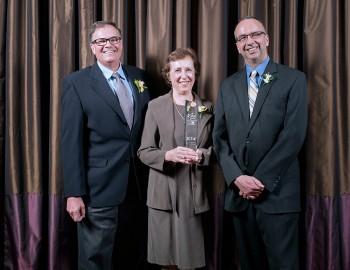