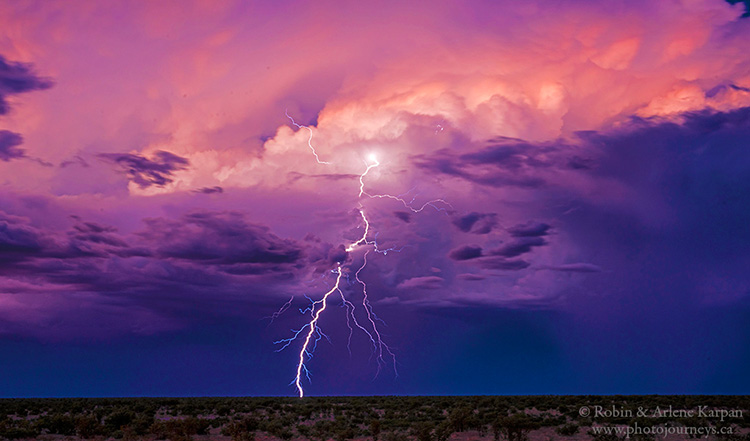 An important part of nature photography is to be flexible. It’s all very well to make plans that tomorrow we’re going to photograph this, that, or the other. But Mother Nature doesn’t always take our plans into account. That awesome sunrise we’re expecting to photograph is obscured by a huge cloud bank, the sky turns grey and drab, or that brilliant display of wildflowers we had hoped to capture is being whipped by the wind. 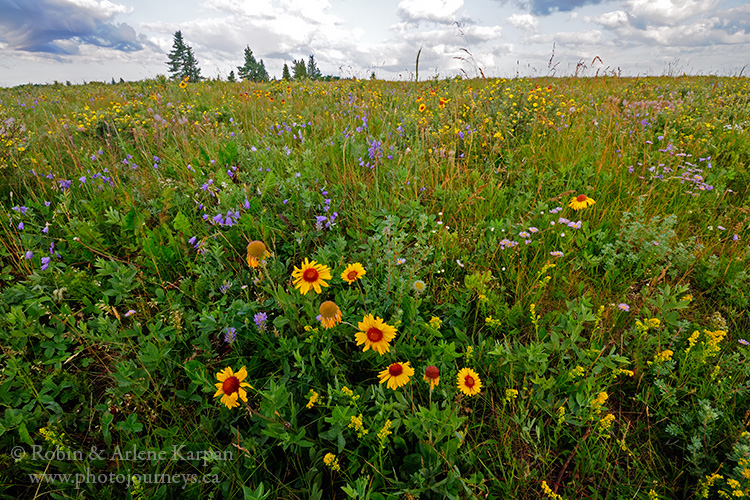 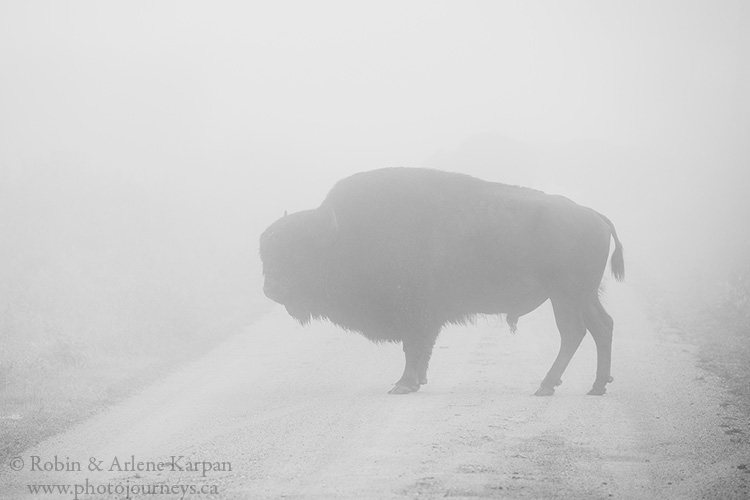 Bison in Riding Mountain National Park, Manitoba. It was the height of summer wildflower season and we arrived first thing in the morning with intentions of photographing bison amidst dazzling wildflower displays. But Mother Nature gave us thick fog instead. So Plan B was to take fog photos.

Sunlight gives your images snap, colour, and depth. However, full sunshine is at its best either early or late in the day, especially during the so-called magic hours just after sunrise and just before sunset. The low angle of the sun can make a scene spring to life with warm tones and accentuated colours. On the other hand, harsh sunlight from late morning until late afternoon makes photos overly contrasty and less appealing, especially in summer. Midday light is less of an issue in winter when the sun’s rays remain low in the sky for the entire day. 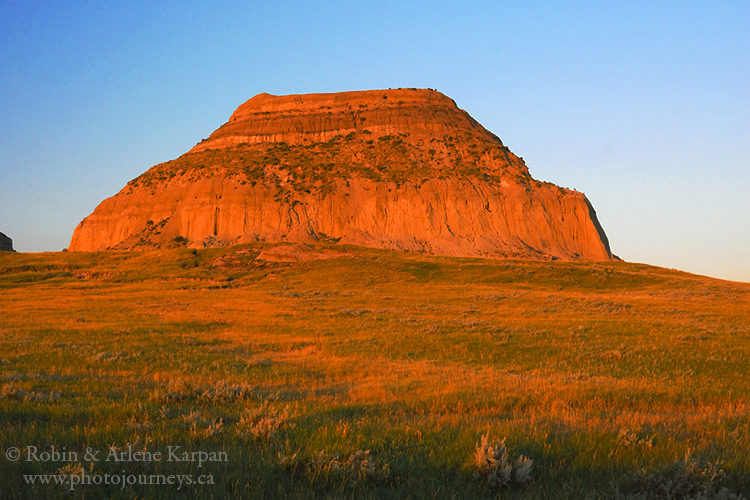 Castle Butte, Big Muddy Badlands, Saskatchewan. A prime example of golden hour photography. For most of the day this butte is a muddy, brownish colour. But at dawn the low angle of the sun turns Castle Butte a brilliant red. 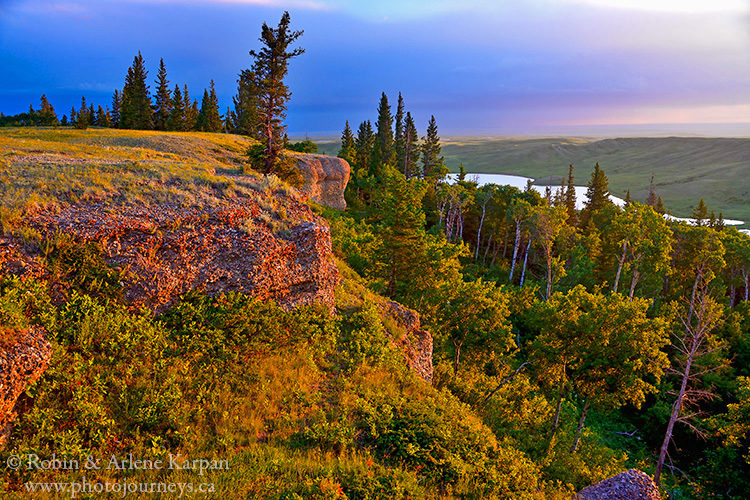 Conglomerate Cliffs, Cypress Hills Interprovincial Park, Saskatchewan. During most of the day, we can see a slight reddish tinge to the east-facing cliffs. But at sunrise the low sun angle of the sun makes them glow. The storm clouds in the distance help the image by providing some drama to the sky. This image was used for the cover of our book, Photographer’s Guide to Saskatchewan.

Overcast conditions with a white looking sky may not immediately spring to mind as being ideal for photography, but this is just what we need in some cases. A meadow of wildflowers in full sunlight may be fine if we’re looking at a grand scene that includes a meadow, hills, and sky. But if we want to get close to the flowers, direct sunlight is often too harsh to capture enough detail. For that, a cloudy day fits the bill. Clouds act as giant diffusers, smoothing out the highlights and deep shadows to reveal more detail. It is the same for any subject, including birds that have contrasting light and dark tones in their plumage. People shots are easier as well. 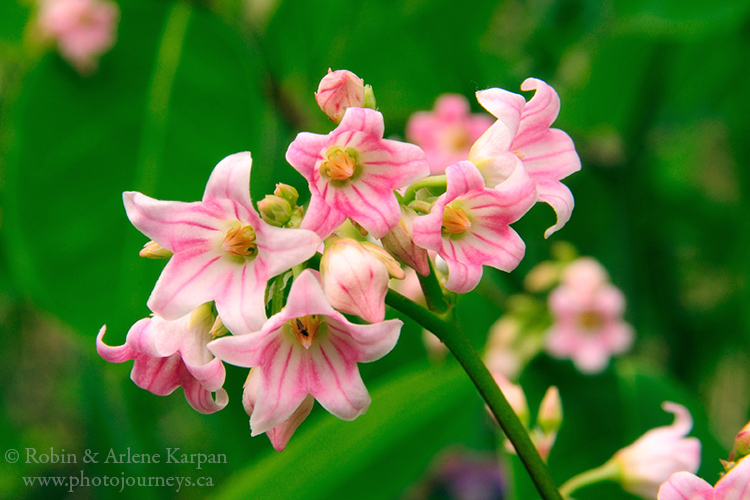 A cloudy day is ideal for photographing under the forest canopy. On clear days, some sunlight shines through, which may be okay in some instances, but often it results in overly bright dapples of sun, harshly contrasting with the shadows. A cloudy sky smooths out the extremes for a more pleasing effect that captures more detail. 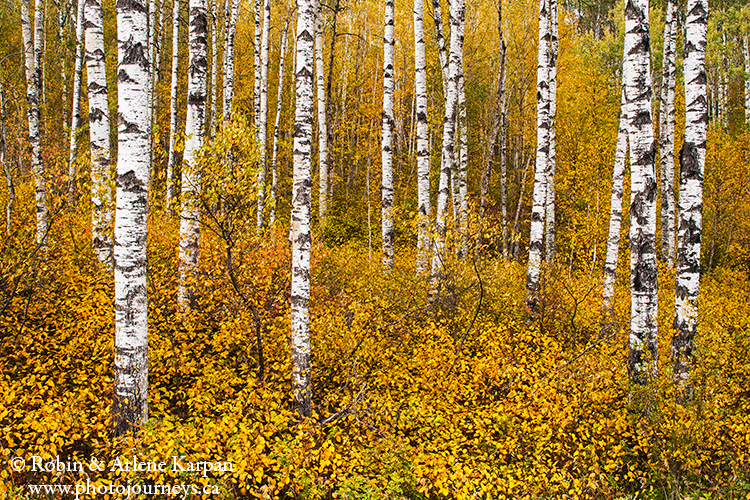 When you get under the forest canopy, you can capture more details on an overcast day. Duck Mountain Provincial Park, Saskatchewan.

Similarly, overcast conditions are great for close-ups of whitewater, such as rapids and waterfalls. The subtle variations of white are more difficult to capture in bright sun. It gets even more challenging when the bright water is framed by dark green forest. Grand landscape shots are certainly possible in cloudy weather, and sometimes even preferable, but it often works better if we frame the shot to exclude a nondescript, greyish-white sky, or at least minimize it. 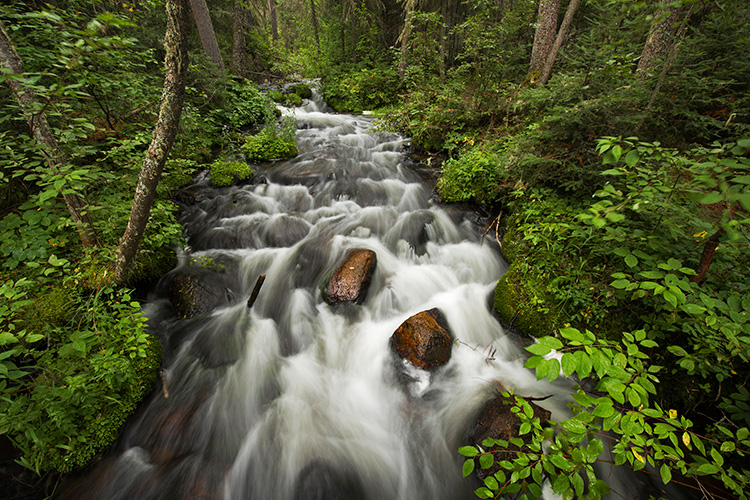 Karst Spring, Grass River Provincial Park, Manitoba. The whitewater is bright and the vegetation deep in the forest is dark. It was a sunny day when we arrived, making the scene overly contrasty and difficult to photograph. We had to wait until a cloud came over and diffused the light enough to get the shot.

On a day when the clouds are distinct, dark, moody, or threatening, the sky can be the most significant element in a landscape photo. Our favourite weather conditions for photography are when we see a mix of storm clouds and sunlight, where the sun peeks through dark clouds, creating light that is much more striking than with a cloudless sky. 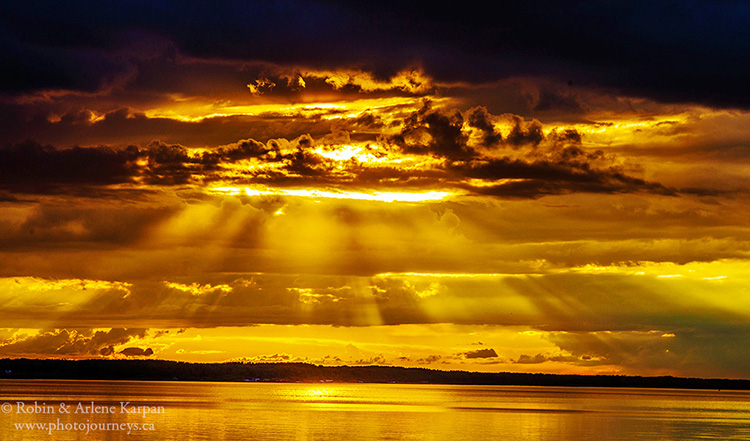 While two days of socked-in rain or drizzle can limit our options, short, sudden summer storms or even threatening skies can provide exciting conditions for photography. Of course, enthusiasm for storm clouds should be tempered with common sense, such as not putting yourself in harm’s way if conditions turn nasty with hail, nearby lightning, wind storms, or tornadoes. 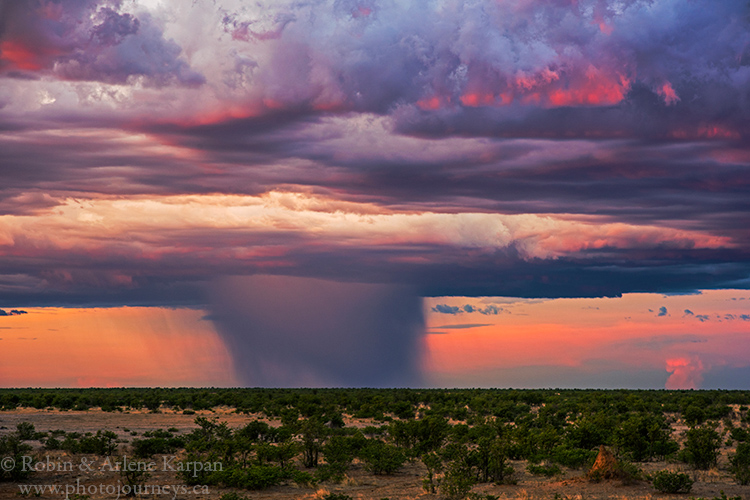 Fog photos can be moody and mysterious, creating a completely different feeling than photographing the same landscape in sunlight. Fog is the ultimate diffuser, so scenes have very little contrast, with shapes becoming more important than detail. 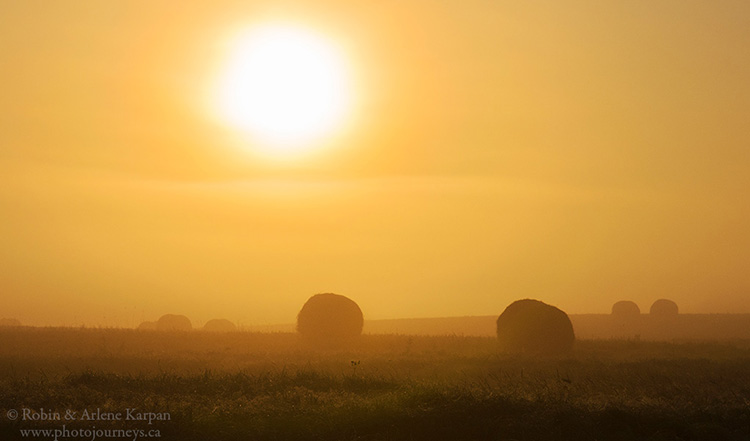 It’s usually best to focus manually because the camera’s auto-focus may have a difficult time finding less distinct objects. Usually you have to add some exposure compensation, sometimes up to a full stop, because camera exposure meters often get fooled by light conditions in fog. Since conditions vary, it’s best to take a couple of shots, look at the results, then adjust exposure as needed. Since longer exposures are usually necessary in fog, using a tripod is definitely preferable. Be careful with increasing the ISO too much to let in more light. A higher ISO usually results in more noise in the image. While this may not be a big deal in many types of photos, the smooth, even tones in fog photos make noise a lot more noticeable. 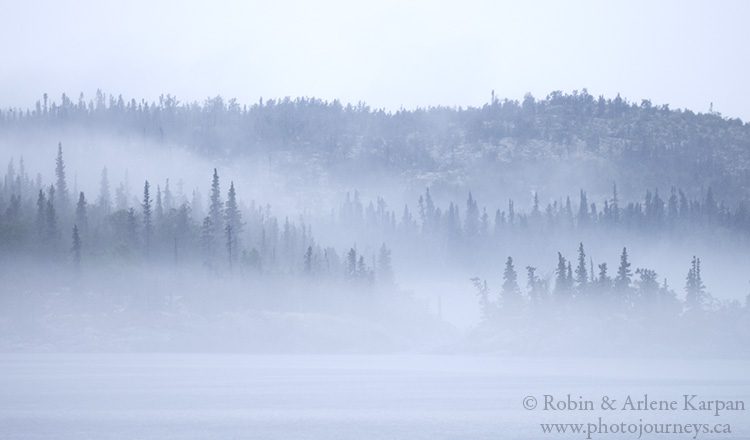 Fog on the north shore of Lake Athabasca, northern Saskatchewan. 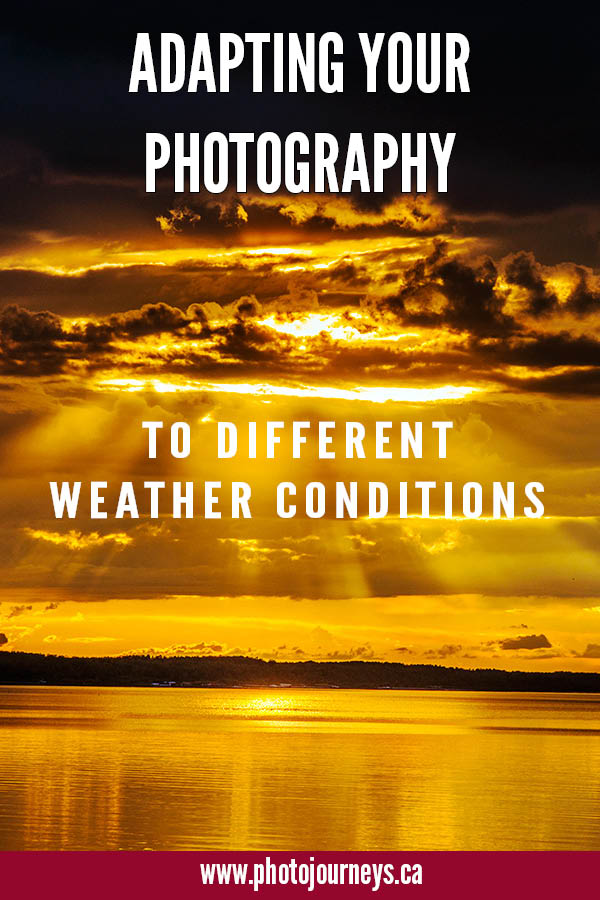