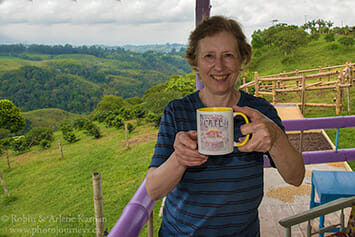 It was the best coffee we’ve ever tasted. But our enjoyment of the moment went well beyond the drink itself. It was also the setting, the company, and the adventure that brought us to this idyllic spot in Colombia’s world-famous coffee region.

Filandia is a small town along the western slope of the Andes in the heart of Colombia’s coffee country. While the surrounding rural landscape of mountains and valleys is nothing short of stunning, what immediately caught our eye was the riot of colour on Filandia’s buildings. Residents aren’t shy about embellishing a wall or even a single doorway with a hodgepodge of intense reds, pinks, greens, purples, or practically any other shade you can think of. It’s as if buildings next to each other compete for attention; not at all like our downright drab buildings back home.

Life revolves around the centre square, dominated by an imposing church and scattered with park benches where folks come to relax or visit. In one building, a student folkloric dance group rehearsed to lilting tunes that we could hear each time we passed by. Then on the weekend they moved to the street in front and put on a spirited public performance with a constant swirl of colour.

Then there are the coffee shops. Lots of them. Each side of the square is lined with restaurants or combination bakeries and coffee shops, most with tables spread along the sidewalk. Even the side streets bustle with more of the same. Yet most are busy since Colombians drink coffee throughout the day or night.

Coffee is not merely a drink or a commodity here, but an integral part of Colombia’s identity. UNESCO even placed the Coffee Cultural Landscape of Colombia on the World Heritage List. It recognizes the coffee region as an exceptional example of a unique cultural landscape that is both productive and sustainable. Small farming plots exist in harmony with the high mountain forest, and strong local traditions passed on through generations continue to thrive.

Jeeps – From Work-horse to Public Transport

Second only to coffee itself, the other iconic symbol of this region is the old Jeep. Not the newfangled models that tend to look like any other SUV, but classic originals from the 1940s and 1950s. Years ago they replaced mules as the work-horses of coffee country. They can haul heavy loads, such as several bags of coffee, and are suited to the rugged mountainous terrain and roads. Many are lovingly restored and painted dazzling colours.

Jeeps also serve as public transport between neighbouring towns. That’s how we arrived from nearby Salento, about a half-hour away. The only direct service is by Jeep, its cramped box on the back fitted with tiny benches along the sides. We were packed in so tight with other passengers that it would have been tough to stick a toothpick between us. On shorter Jeep runs, people stood on the back bumper as well. This was about a month before the pandemic was declared and social distancing suddenly became a way of life. Though only a few months ago, it now seems like a bygone era.

To see where coffee comes from, we arranged a visit to a nearby farm. The next morning coffee farmer Nicolas Spath picked us up in town in his 1954 Willys Jeep (any other type of vehicle would have been disappointing). Slowly we bounced for about 10 kilometres along a narrow gravel road, all the while being treated to non-stop views over emerald green hills and valleys dotted with small landholdings.

Our biggest surprise was the size of coffee farms. Colombian coffee is so well known that we imagined huge plantations would be cranking out the stuff to meet demand. Instead, the vast majority of the more than 500,000 coffee growers are small family farms, averaging less than five hectares.

Colombia’s terrain is not suited for large-scale mechanized production. Coffee grows high in the mountains with scant level land, requiring almost everything to be done by hand. Yet these mountain slopes have the ideal mix of volcanic soil, climate, and rainfall that coffee trees prefer. Here the strategy is to concentrate on quality rather than quantity, which has worked judging by the number of brands boasting 100 percent Colombian coffee.

Twenty minutes later, we arrived at the countryside home where the young farmer lives with his dog Chep. Nicolas built his modest but comfortable house almost entirely from local bamboo. There is nothing modest, however, about the gorgeous view from the verandah. The only other buildings in sight are the house and yard just up the road where Nicolas’ retired parents live.

The 2,000 or so coffee trees that he planted cover the steeply sloping land in front of the house. The older, larger trees farther down the hillside were planted five years ago, while newer plants cover the upper section. Trees are never allowed to get too high. When they become too difficult to reach from the ground, they are cut down to start growing again.

“It takes about 22 months for a new coffee tree to start bearing fruit,” Nicolas explained. “First little flowers emerge on the stem and stay open for about three days. After that, berries start to develop.”

Nicolas manages the operation by himself, with occasional help from a hired worker. He thoroughly enjoys the peaceful country life, well away from the congestion and pressures of urban Colombia. But it’s not an easy way to make a living. Many producers have abandoned coffee farming because of the uncertainty of constantly fluctuating prices and difficulties in finding labour.

While the main harvest seasons come twice per year, coffee beans are always ripening. Nicolas picks every 20 days. Even if a tree has only a few ripe beans, they still have to be picked. Overripe ones that fall on the ground are almost immediately infected by worms and become unusable.

Nicolas tied wicker baskets around our waists and invited us to get a taste for hand-harvesting beans. Judging by the meager selection of red beans in our baskets, it’s doubtful we would make it as professional coffee pickers, especially since they get paid by the kilogram, not by the hour.

Nicolas took us through the entire operation, from shaded nursery areas where he starts new trees, to the shed where he puts beans through a hulling machine to remove the outer shell, and the drying area. He spreads the beans out to dry on large trays on sliders. If it starts to rain, which it does a lot here, he can quickly push the trays underneath a part of the house built on stilts.

The Freshest Cup of Coffee Ever

Most producers take their dried beans to a buyer or to a co-operative, where they are eventually sold on the world market. Nicolas takes part of his production to a commercial roaster in a nearby town, then packages the beans to sell directly to consumers.

“I want to show you what coffee even fresher than that tastes like,” said Nicolas as he headed back to the drying trays.

He scooped up some beans that had been drying for a couple of weeks and put them in a pan covered by a lid with a crank on top. With the pan over low heat on the stove, we took turns working the crank for the next 20 minutes to keep the beans moving so that they didn’t burn. The beans made slight popping sounds, releasing an enticing aroma that wafted across the kitchen. This achieved a medium roast which Nicolas considers the best style of coffee with a balanced taste that brings out more complex flavours.

He then took the roasted beans outside and poured them from one container to another while using a tiny electric fan to blow away the lighter chaff produced while roasting. Then it was back to the kitchen to grind the beans and brew the coffee.

Grabbing our cups, we settled into chairs on the front verandah with the million-dollar view. We looked over the coffee trees against a backdrop of the intense green valley and mountain tops. Nicolas’ cows lazily grazed in the lush grass while flashy birds looking as if they have been dipped in paint flitted among the nearby branches. Our most enjoyable, finest tasting cup of coffee was not in some fancy coffee shop but on the peaceful farm where the coffee was grown, while sharing a cup with the farmer who grew it. More than a drink, it was savouring the essence of Colombia. 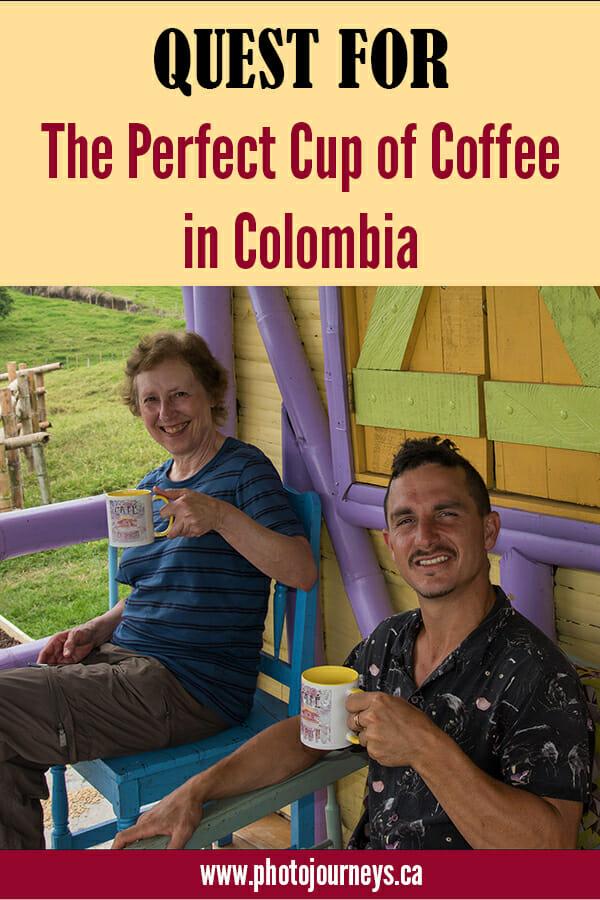