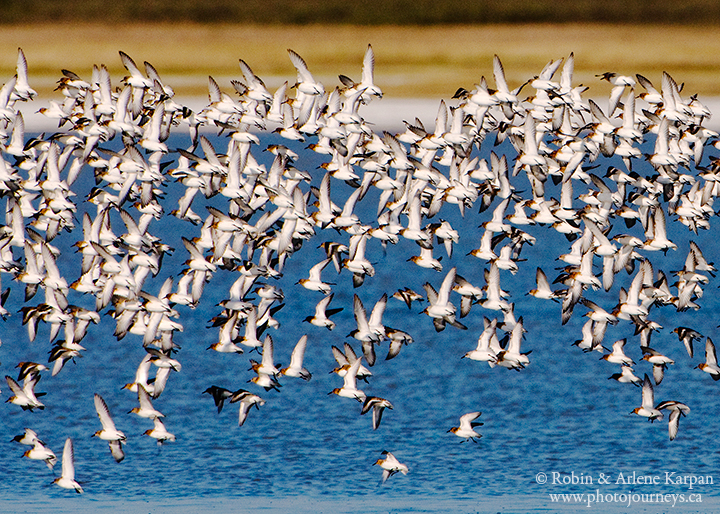 The spring shorebird migration ranks among nature’s great spectacles, with Chaplin Lake in southern Saskatchewan a top hot spot. The tasty buffet served up on Chaplin’s shores makes this “the” stopover for hundreds of thousands of shorebirds on epic journeys from wintering grounds as far south as South America to as far as the high Arctic where many nest.

Lined with brilliant white banks, Chaplin Lake sprawls along the Trans Canada Highway, roughly half way between Moose Jaw and Swift Current. The second largest saline lake in Canada, its shallow water and mudflats hold the ideal smorgasbord of aquatic insects and crustaceans that shorebirds need to fuel up for their long travels. The Western Hemisphere Shorebird Reserve Network, which deals with important wetlands throughout the Americas, named Chaplin Lake of Hemispheric Significance. This is one of only three places in Canada with that high a designation, the other two being the Bay of Fundy and the Fraser River Estuary.

Bird numbers can be astounding, with as many as 73,000 counted in one day. More than 30 migrating shorebird species include dowitchers, ruddy turnstone, red-necked phalaropes, red knots, black-bellied plovers, and various sandpipers. Feeding dowitchers are like a bunch of tiny sewing machines, jabbing their needle-sharp bills into the shallow water so rapidly that their heads become a blur.

The highlight is undoubtedly the huge flocks of sanderlings, with one-day estimates topping 55,000. It is thought that up to half the world’s sanderlings stop here to refuel on their way to the Arctic. Seeing them in flight is like watching an aerial ballet, as large flocks dart around in unison, abruptly changing direction with choreographed precision. They are so densely grouped that you wonder why they don’t run into each other.

Different shorebirds arrive at slightly different times between late April and early June. Sanderling numbers usually peak around the end of May, although this could vary with weather conditions and water levels. Besides migrants, this is also prime territory for resident shorebirds such as willets, Wilson’s phalarope, and the elegant and colourful American avocet. Chaplin is the best place we know of, anywhere, to get close to endangered piping plovers. Resident birds stay throughout the spring and summer, so there’s always something to see.

Chaplin Lake is part of a larger wetland complex including nearby Reed Lake and Old Wives Lake. Potential hot spots for finding birds include Hwy #58 south of the town of Chaplin where it cuts through wetlands, or the viewing tower overlooking Reed Lake, a short drive west along Hwy #1. Your first stop should be the Chaplin Nature Centre where staff can fill you in on what’s happening. To really get up close and personal with the wildlife, take the guided lake tour run by the Nature Centre, taking you along the system of dykes crossing Chaplin Lake that are not open to the general public. This year, tours run between May 18 and the end of August.

Chaplin Lake is one of the “must see” places in our bestselling book, The Great Saskatchewan Bucket List – 50 unforgettable natural wonders to see before you Kick the Bucket.