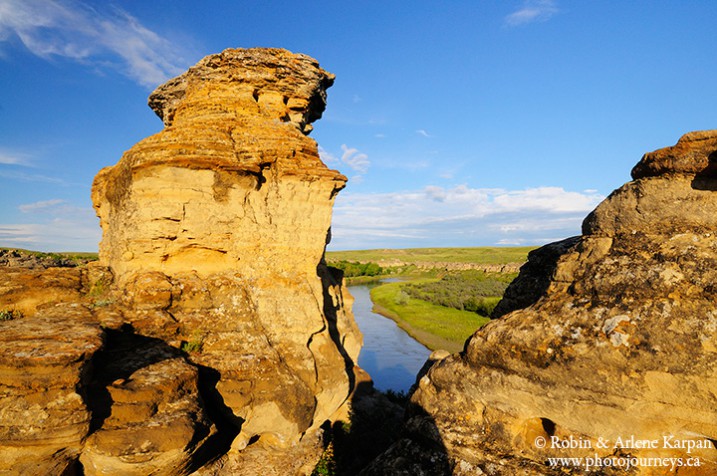 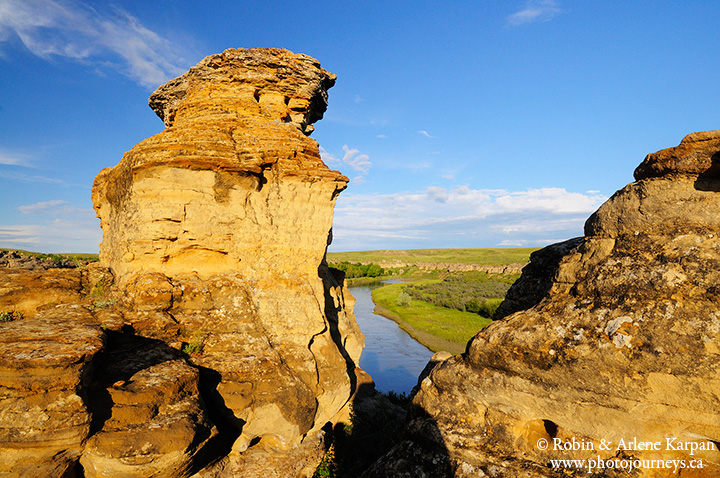 Ancient images carved on weathered rock gaze over the meandering river, its green banks lined with a fairytale landscape of eroded cliffs and whimsically sculpted hoodoos. Alberta’s Writing-on-Stone Provincial Park has two claims to fame – the largest collection of aboriginal rock art on the North American Great Plains, and an unusual and delightful prairie landscape.

The park straddles the Milk River valley in southeastern Alberta, just north of the Montana border. As we drive along the gently rolling cropland and grasslands, nothing prepares us for the breathtaking sight when we come over the crest of the valley rim. The river is lined with towering cliffs, rugged badland coulees, with a backdrop of the Sweetgrass Hills in Montana. But what really grabs our attention is the sea of hoodoos just below us, like a thousand overgrown golden mushrooms sprouting on the riverbank. 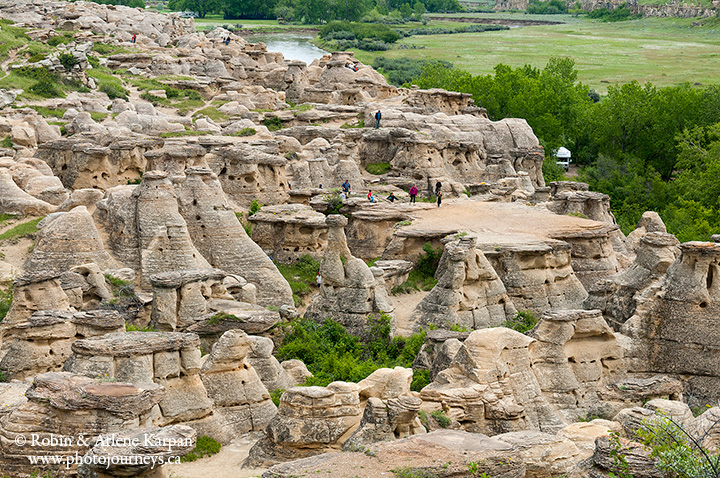 Walking along the appropriately named Hoodoo Trail, we wander through this extraordinary landscape sculpted by frost, wind, and water. Extensive erosion has carved contours and caves into cliffs, and worn holes through hoodoos. Wildflowers add splashes of colour to the seemingly inhospitable badland terrain. 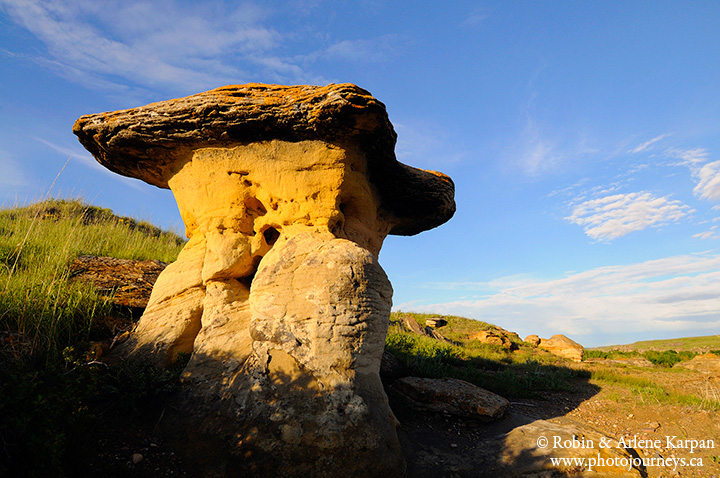 Early morning or evening are prime times for photography when the warm light seems to bring the hoodoos to life. We’re treated to an extra show the day we arrive. Storm clouds are brewing, then in early evening the skies open up in a powerful but fast-moving thunderstorm. Now low in the sky, the sun comes out immediately after the passing storm, illuminating the wet sandstone with a rich golden glow and turning the grasslands an intense green. Topping it off, a rainbow frames the scene. 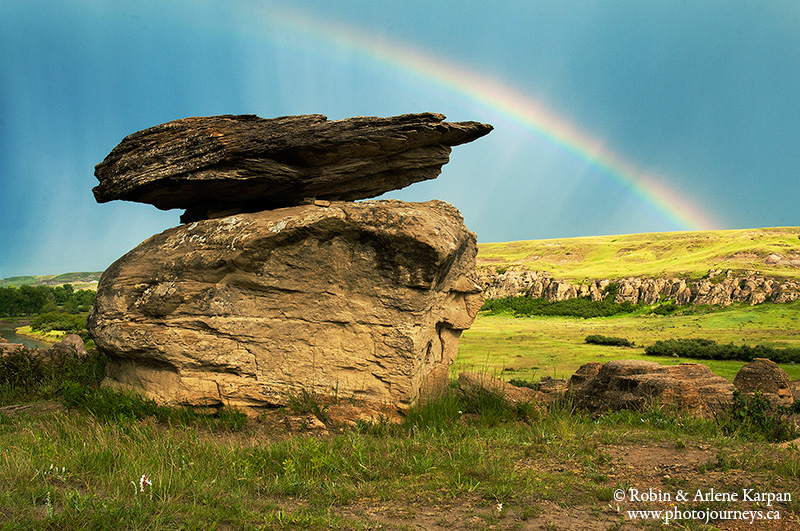 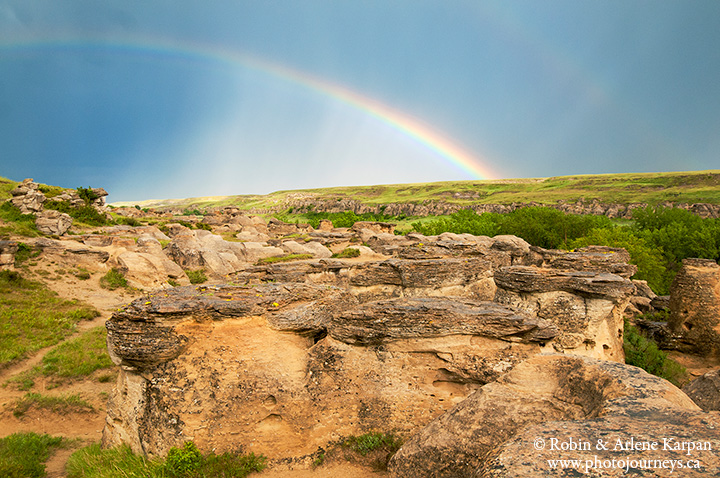 As stunning as the scenery may be, the rock art is the main reason for protecting this area. About 50 sites have been identified. Most of the ancient images are petroglyphs, where drawings have been etched into the stone, although some are pictographs, made by painting on the rock with coloured ochre. Many artists are thought to be ancestors of the Blackfoot, who still consider this place to have spiritual significance. 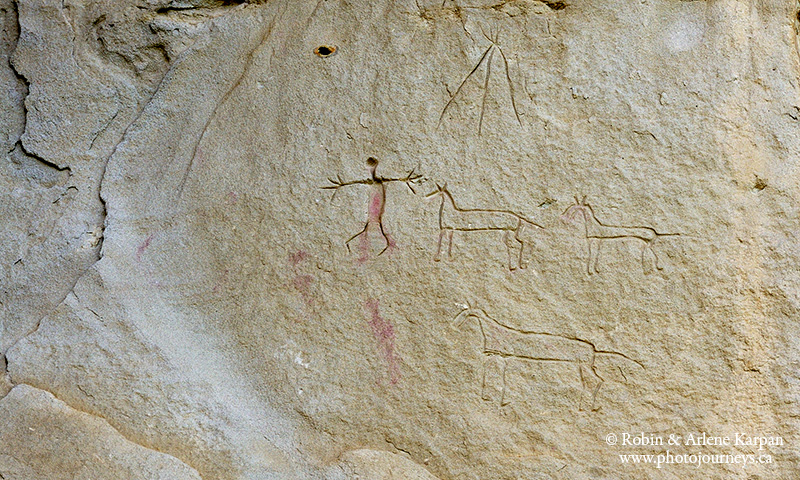 Archaeologists say that people have camped in this valley for over 3,500 years. How long the drawings have been here is uncertain, since they are difficult to date. Some images are obviously more recent because they portray horses, guns or items available only after European contact. But others are thought to be several hundred years old, possibly more, providing a fascinating window into our distant past. 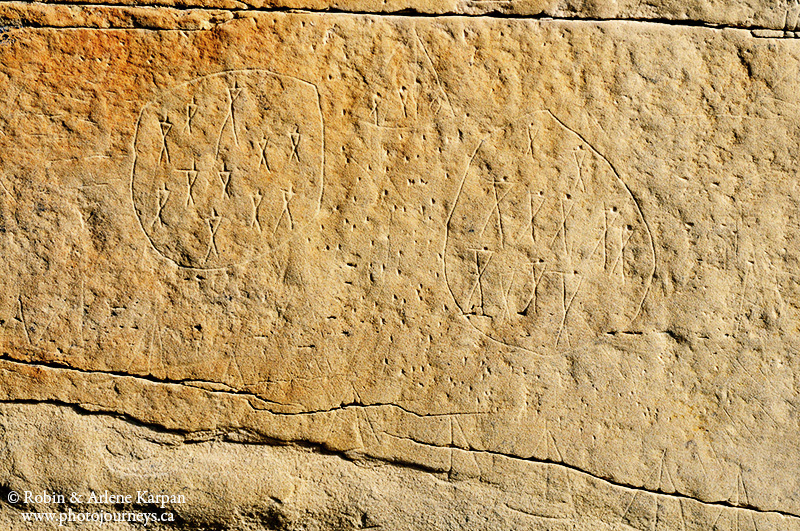 The drawings portray a wide array of figures and subjects including people, animals such as deer and bison, hunting scenes, battle scenes with warriors carrying shields, headdresses, and cryptic designs whose meanings have been lost in time. Some images may be associated with vision quests, where a young man would fast for several days and wait for a vision to guide him.

The most famous petroglyph is the Battle Scene, elaborate mural-like carvings showing warriors attacking a tipi encampment. You can reach this site along the Hoodoo Trail. The only way to see the other sites is on a guided excursion led by a park interpreter, a definite highlight of any park visit. 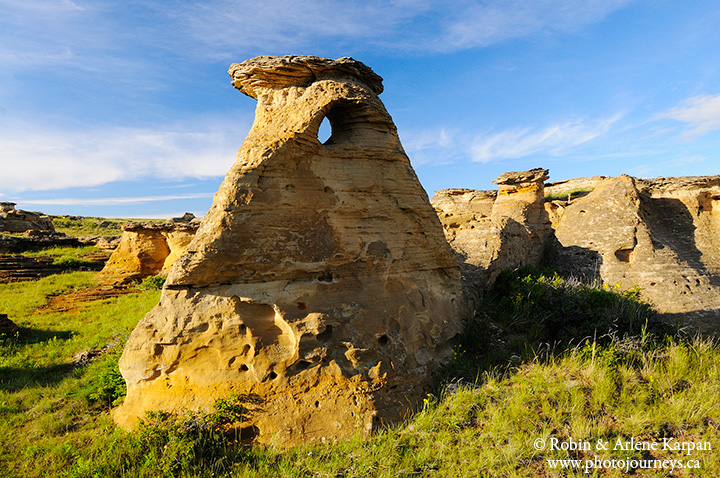 To make the most of your visit, it’s best to stay in the park campground, nestled in a pleasant wooded area in the valley. Since the campground is immediately next to the hoodoos, it’s quick and easy to get out for prime early morning or evening photography. You’ll be thankful for the shade in mid-summer, since Writing-on-Stone has a reputation as one of the hottest places on the prairies. 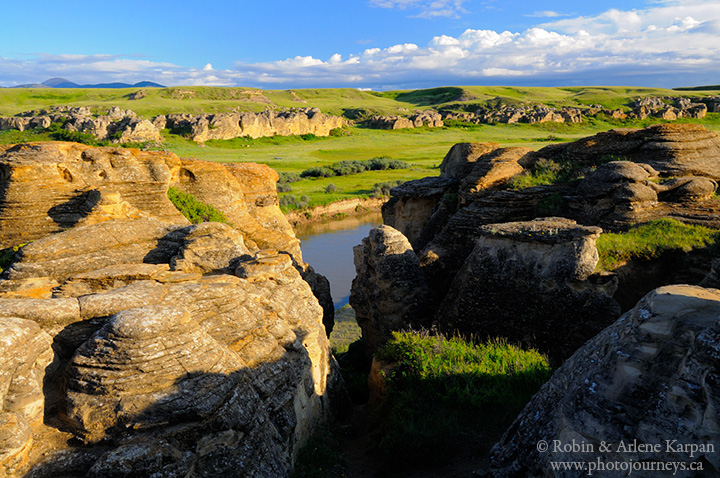