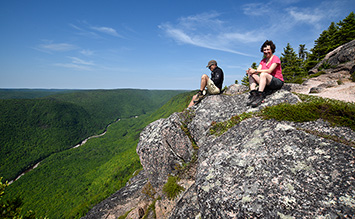 Nova Scotia’s Cape Breton Highlands National Park boasts spectacular scenes around every corner, and the best way to experience this wonderful part of the country is to hit some of the trails. The park lists 26 hiking trails, but here are three nice ones to give you a taste. One is fairly easy and short, another is moderately easy, and the third might require some huffing and puffing.

This is undoubtedly Cape Breton Highland’ most famous hike. The 7.5-km (or 9.2 km if you take an optional loop on the way back) return walk is fairly level, until you get near the end. Then a series of steps and boardwalks take you to spectacular viewpoints on headlands overlooking the west coast. You look over one of the most dramatic sections of the Cabot Trail highway as it winds through a deep valley and along steep cliffs that drop into the sea. Along the way, the trail passes through forest noted for wildlife, especially moose and coyotes. In fact, the moose population is so high that they are having a major impact on tree growth.

Located along the Cabot Trail highway on the east coast, the easy 2.3-km loop winds through jack pine forest which is unusual in these parts. Interpretive panels tell the story of the forest and the role fire plays in regeneration. The trailhead is also the start of the longer Coastal Trail that follows the rugged shoreline and boulder beaches, and connects with the Jack Pine Trail. An excellent option is to take the Jack Pine Trail to the end of the loop, then come back along a portion of the Coastal Trail, providing a taste of two different environments in an easy loop walk. The trailhead is near Black Brook Beach, one of the most popular beaches in the park. Situated in a scenic cove, the beach has a small waterfall at one end, some interesting rock formations, and a pleasant picnic site.

The views are outstanding, but you’ll have to work for it! It’s only a 7.4-km loop, but has a 335 metre gain in altitude. While there are some rugged sections, the trail isn’t particularly difficult; rather it’s the constant climbing that can be challenging. But when you reach the top, the huffing and puffing makes it all worthwhile. The trailhead is inland a bit from Ingonish Bay, near the southeast corner of the park. The walk starts through thick Acadian forest and as you gain altitude it changes to boreal forest with huge rocky outcroppings. From the top, you look down into the incredibly green Clyburn Brook canyon. Looking back, the Atlantic coastline looms in the distance, with the long Middle Head Peninsula dividing the north and south parts of Ingonish Bay. The return part of the loop is much more gradual and easy to walk.

For details on these and other hikes, see the Parks Canada website www.pc.gc.ca. 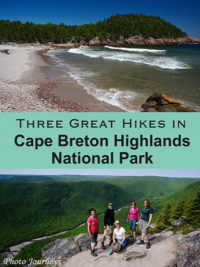 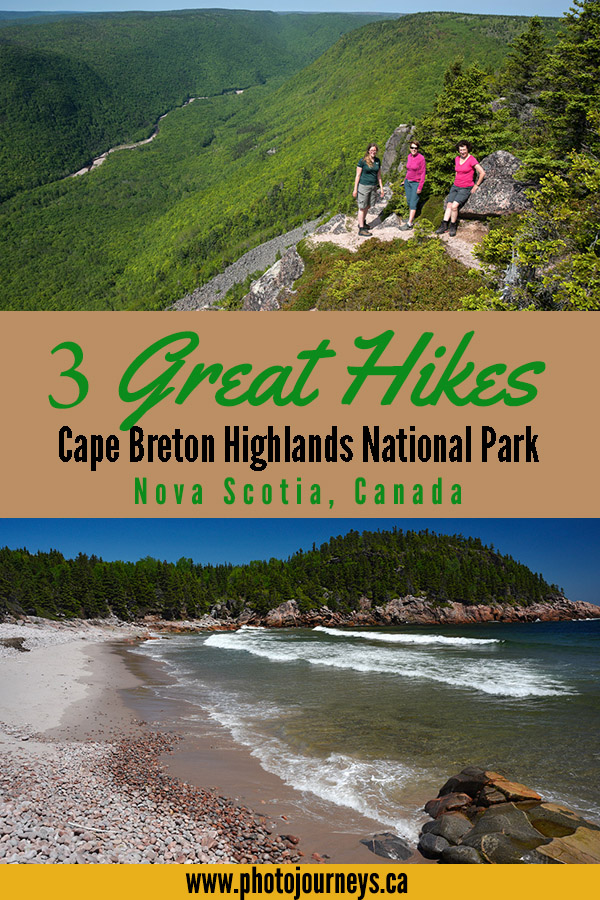