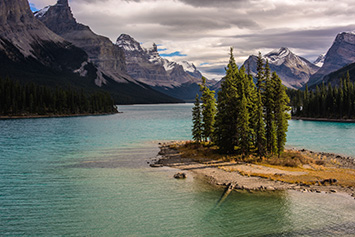 
It’s almost a cliche to refer to an “iconic scene” or a “Kodak moment”, but in the case of Jasper National Park’s Spirit Island, both descriptions are a perfect fit. In the 1940s the Kodak company sent photographer Peter Gales to get images to promote Kodak film. One shot he took was of a tiny island in Jasper’s Maligne Lake. The photo was enlarged to mural-size and displayed in New York City’s Grand Central Station. Millions of people were exposed to this little-known piece of wilderness in the Canadian Rockies, and the island’s fame quickly spread. Over the years, this setting has found its way to countless brochures, postcards, and tourism ads. It’s now considered one of the most photographed spots in the Rockies, and indeed in all of Canada. If any place deserves to be called iconic, this would certainly be it.


The best part of going to photograph Spirit Island is not just the island itself, but that it’s part of a larger experience. Though the island is the main focus of the quest, you may well find that the photographic possibilities along the way are equally compelling. Just getting there is half the fun.


Along the 50-km drive from Jasper townsite to Maligne Lake, you pass some of the park’s most scenic features – incredible views over Pyramid Mountain, walks along the deep, narrow Maligne Canyon, and strange Medicine Lake where the river backs up to form the lake then disappears underground. Some spectacular hiking trails leave from the shore of Maligne Lake, from short strolls to major backcountry treks.

Icy-blue Maligne Lake is the largest glacial-fed lake in the Canadian Rockies. Spirit Island is about 14 km down the lake, with no road access. You can canoe or kayak there, but the easiest is to take the Maligne Lake Cruise operated by Brewster Travel that runs several times a day. The 90-minute interpretive tour has been named “Best Boat Cruise in Canada” by Reader’s Digest. Along the way we pass a series of imposing snow- and ice-capped mountains, while the boat’s guide relates stories on the landscape, history, and aboriginal connection to the lake.


The first thing you notice about Spirit Island is that it technically isn’t an island, but is connected to the mainland by a sliver of low-lying land. It’s only during very high water that it becomes separated from the mainland. Perhaps it’s called an island because “Spirit Peninsula” wouldn’t have the same pizzazz.


The boat lands at a nearby dock where passengers have a chance to get out and look over the classic view with the island in the foreground and the breathtaking mountain canyon as a backdrop. It’s worthwhile taking in the view both from the shore and from the viewpoint slightly higher up. Which vantage point is better for photos is a matter of personal taste. To get the best light for photography, as well as avoiding crowds, take a tour late in the day. On certain days during the summer, they also run a “Through the Lens Tour”, a longer trip specifically designed for photography and led by a professional photographer.


For more information on the tours see www.malignelake.com. Also see the Parks Canada site at
www.pc.gc.ca/jasper. 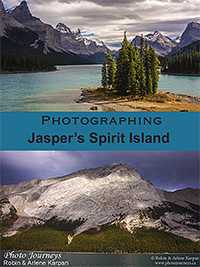