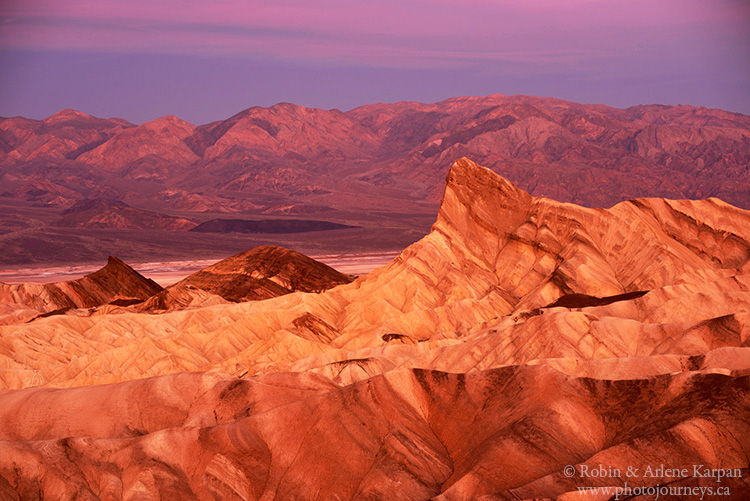 Zabriskie Point, Death Valley National Park, California, USA. This is a famous viewpoint where many photographers come for sunrise. While sunrise is definitely impressive, we liked the half hour or so before sunrise even better, especially on a morning such as this when a few clouds reflected a reddish glow across the landscape before the sun cleared the horizon. See our March 23, 2016 posting for more on Zabriskie Point. 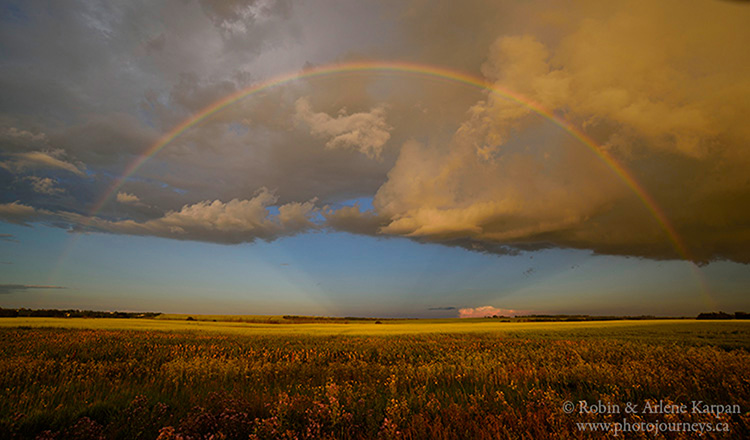 Rainbow near Saskatoon, Saskatchewan, Canada. We didn’t have to go far for this one – less than a ten minute drive from our house near the east end of Saskatoon. We were eating supper early one evening when a sudden thunderstorm blew through – the powerful but brief kind that we often get here in mid-summer. The sun came out while the storm was still around, promising ideal conditions for a rainbow. The rest of supper was put on hold while I quickly headed out of town to get to open country. 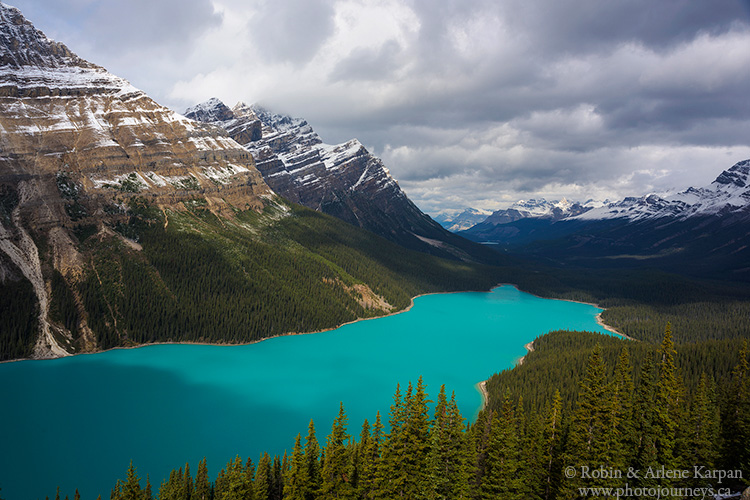 Peyto Lake, Banff National Park, Alberta, Canada. Peyto Lake is near the highest point along the famous Icefields Parkway that runs between Lake Louise and Jasper. The impossibly blue water is from glaciers that feed the lake. The official lookout point is an extremely popular stop, often filled with selfie-stick wielding tour bus crowds. But walk just a bit farther along a hillside path and you come to an even better vantage point, often with no one else around. 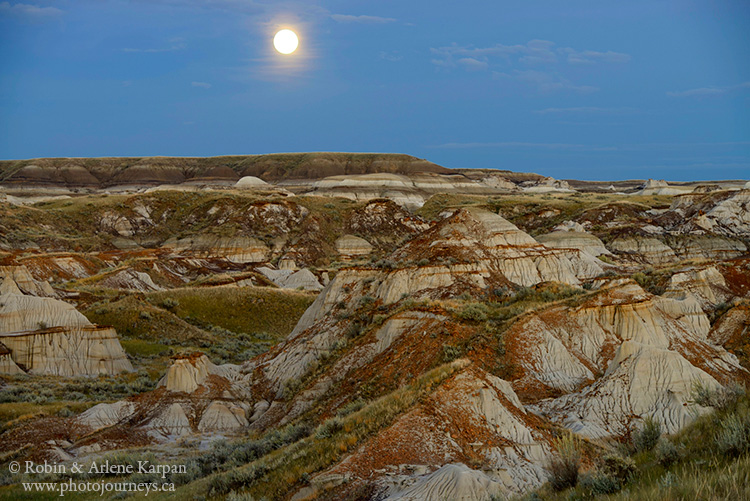 Valley of the Moon, Dinosaur Provincial Park, Alberta, Canada. Dinosaur Provincial Park has the largest expanse of badlands in Canada, with almost unending dazzling photogenic scenes. We joined an excursion run by the park to travel to some of the top spots in evening light, ending with an area called the Valley of the Moon. To top it off, there was even a full moon. See our Oct. 25, 2016 posting for more on this spectacular park. 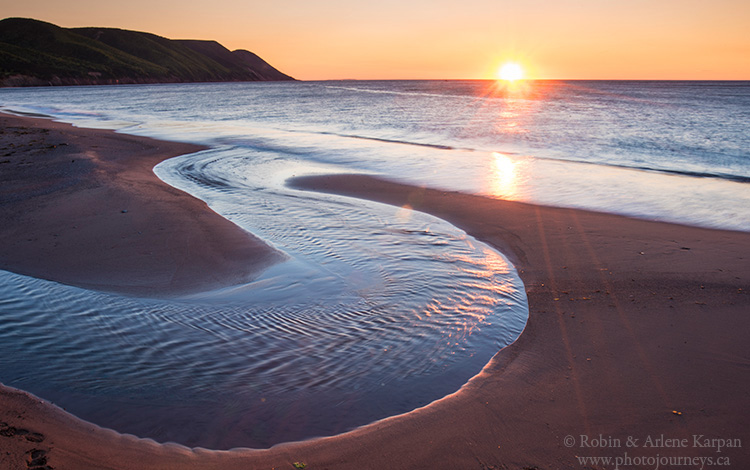 Cabot Landing Provincial Park, Cape Breton, Nova Scotia, Canada. This is the spot where explorer John Cabot landed in 1497. Today it is a park with a beautiful long beach, and the perfect place for sunrise. We were introduced to this special spot by noted Cape Breton photographer, Kris Tynski, who knows all the fabulous places on the island. Come here for sunrise and you’re practically guaranteed to have the place to yourself. 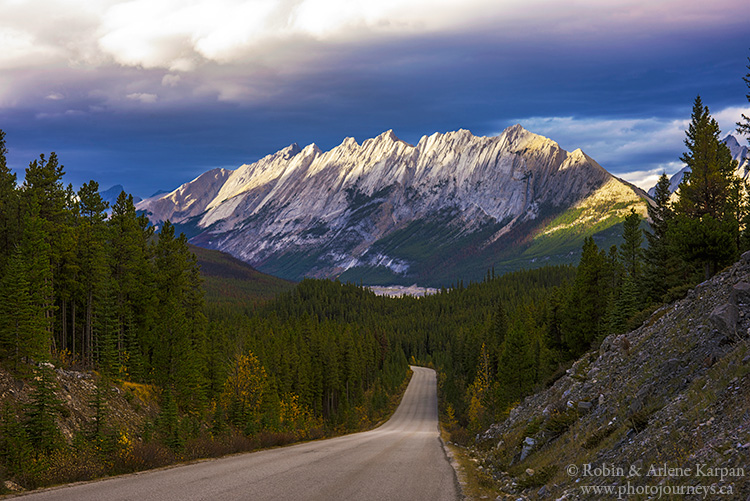 Maligne Lake Road, Jasper National Park, Alberta, Canada. This is one of the most scenic routes in the park to begin with, but when we add some dramatic lighting, it becomes especially stunning. We were driving back to Jasper one evening, when storm clouds moved in, but there was still some sunshine. If we were to pick our favourite type of weather for photography, it would definitely be a mix of storm and low sun. 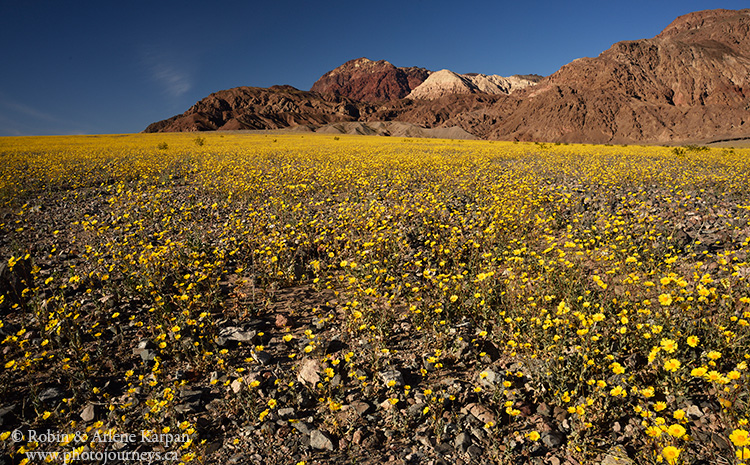 Super bloom, Death Valley National Park, California, USA. Death Valley is hot, dry and sparsely vegetated. But every once in a while, it is magically transformed. The fall and winter of 2015-16 had an usually high amount of rain, so by the time February came around, a so-called Super bloom was in full force, with expanses of dazzling wildflowers seemingly growing out of pure rock and gravel. See our March 8, 2016 posting for details and more photos on the Super bloom. 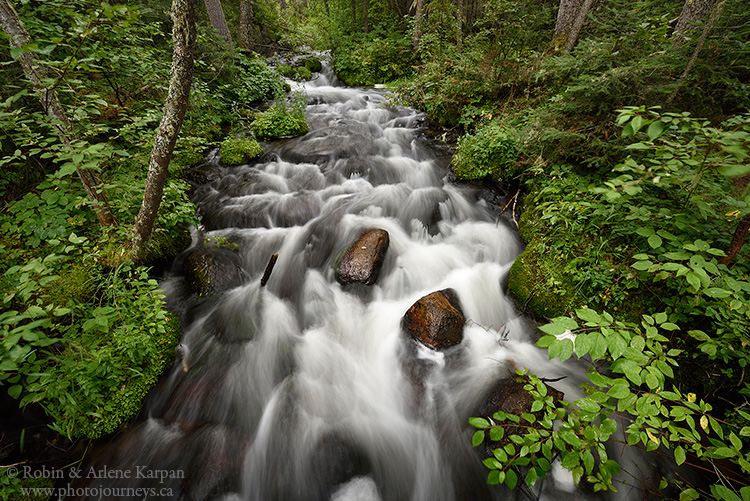 Karst Spring, Grass River Provincial Park, Manitoba, Canada. This short stream is not only beautiful, but mysterious. It seems to spring out of pure rock. Exactly where the water comes from is not entirely certain, but it is believed to be caused by this area’s location on the edge of the Precambrian Shield. Water seeps through the softer sedimentary rock, but when it hits the harder Shield rock, it is forced out, giving the impression of water spouting from pure rock. 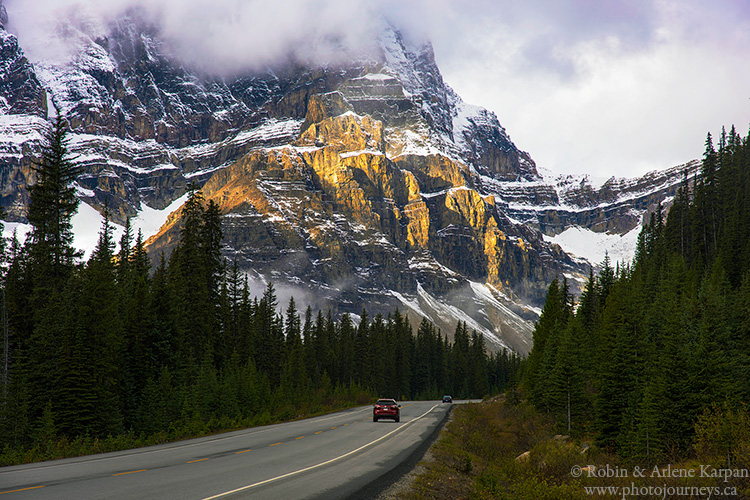 Icefields Parkway, Banff and Jasper National Parks, Alberta, Canada. It’s tough to pick a single image from this famous drive serving up one spectacular view after another. But this spot near the Saskatchewan Glacier was a highlight, combining magnificent mountains with snow and ice, and forested valley. The sun peeking through the clouds to illuminate part of the mountain was the icing on the cake.