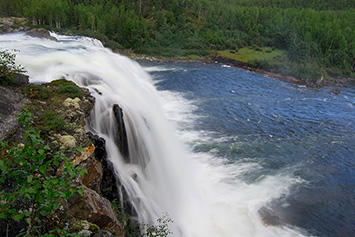 Wild rivers in northern Saskatchewan’s boast many spectacularly beautiful waterfalls. Some are big and bold, taking your breath away as you stand on the brink or at the bottom and look up at the awesome power of thundering water. Others are more subtle – small, picture-perfect cataracts framed by the green boreal forest. What they have in common is a pristine wilderness setting. All of Saskatchewan’s major waterfalls are away from the road, so they have so far escaped the ravages of “development”. Some take a bit of effort to reach, but once there, chances are that you’ll have them all to yourself. Here is a sample of some of our favourites: 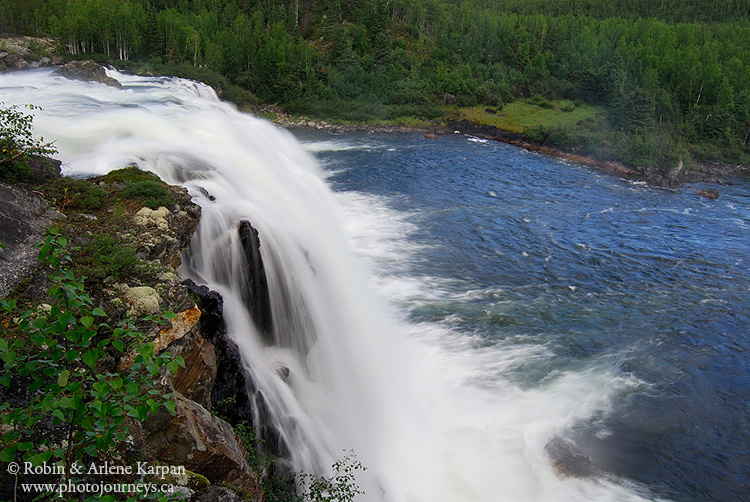 Let’s start with the big daddy of Saskatchewan cataracts – Hunt Falls on the Grease River. The main drop is 15 metres high and 60 metres wide, and is part of a spectacular three kilometre section of river that drops 35 metres.

While remote, located about 40 km northwest of Stony Rapids, Hunt Falls is not difficult to reach. Float planes can land in a protected cove on Eagle Rock Lake just above the falls. From there, it’s a fairly short walk to the brink of the falls, and along the side to the small pool at the bottom for this view. 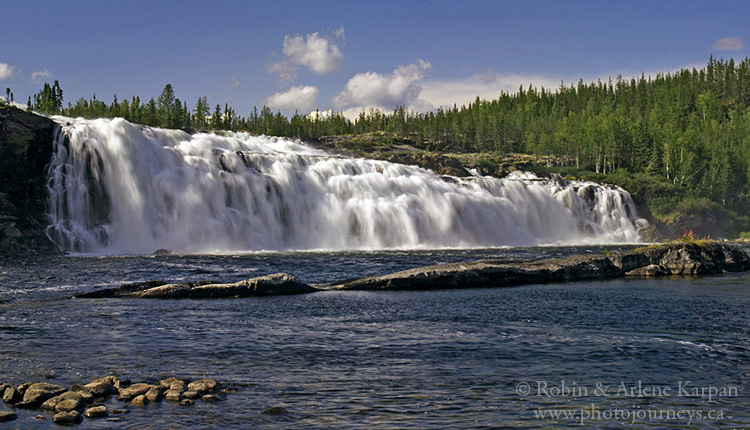 To see Hunt Falls from this angle, you’ll need a canoe or boat. From the cove where float planes can land, you have to paddle to the other side of the lake’s outlet (being careful not to get sucked into the current!), then hike through the bush and hillsides for what we consider the nicest viewpoint over the falls. What we liked best about this place was not just the falls themselves, but the drop-dead gorgeous setting around it as well. 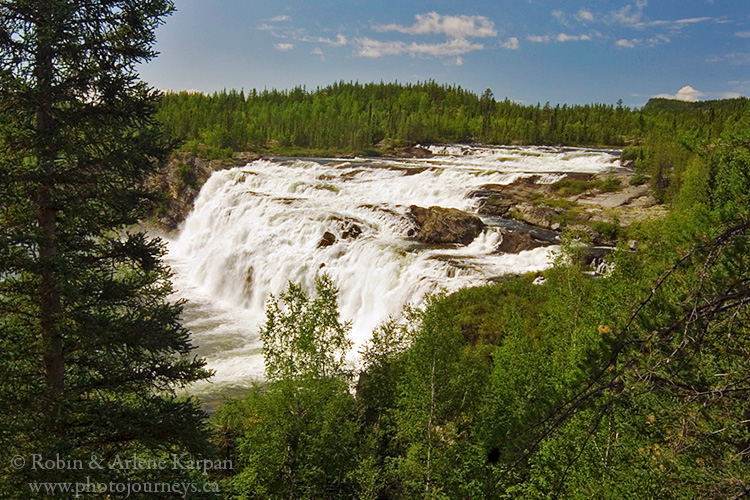 Hunt Falls is only one of many wild whitewater features of the Grease. Not far upstream, this series of cataracts funnels the river into Eagle Rock Lake.

The Porcupine River is the ultimate in remote northern Saskatchewan canoeing routes. This part of northeast Saskatchewan has long been a traditional travel route for the Dene, though they tended to avoid travel on the Porcupine River itself, referring to it as Dead Man’s River because of the difficulty in getting through the numerous waterfalls, rapids, and canyons. But if you like waterfalls, this river delivers big time.

The Porcupine River is the ultimate in remote northern Saskatchewan canoeing routes. This part of northeast Saskatchewan has long been a traditional travel route for the Dene, though they tended to avoid travel on the Porcupine River itself, referring to it as Dead Man’s River because of the difficulty in getting through the numerous waterfalls, rapids, and canyons. But if you like waterfalls, this river delivers big time.[/caption]

We consider Smoothrock Falls the highlight of the Clearwater River, long known as one of Saskatchewan’s top whitewater canoeing routes. The river makes a huge and lengthy S-turn, so you can’t see all of the falls at once. A bonus is that there’s an excellent place to camp right at the brink of the falls. 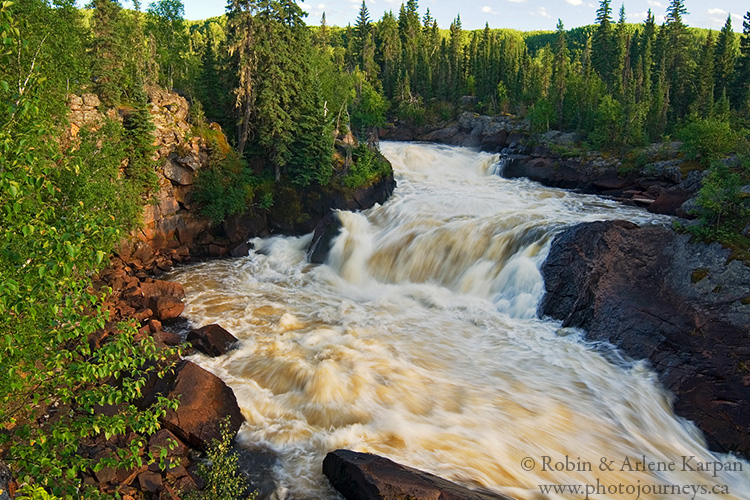 A bit farther downstream, the Clearwater thunders through Skull Canyon. This view is right from our campsite. As you can see, we prefer a room with a view. 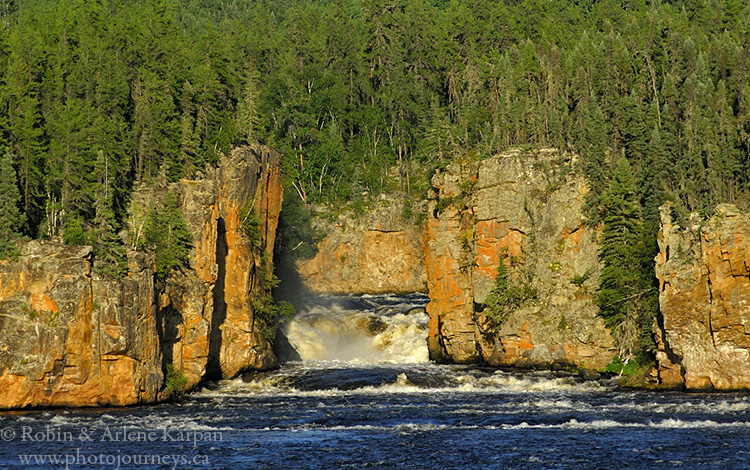 On the western end of Grease Bay, on the north shore of Lake Athabasca, we find Bulyea Falls.

The MacFarlane is a wild river that saves its grand finale until near the end. A few kilometres before reaching Lake Athabasca, it plunges over a series of falls, including the one here. These falls are not easy to visit – options include a canoe trip down the MacFarlane River, or a fairly arduous hike upstream. 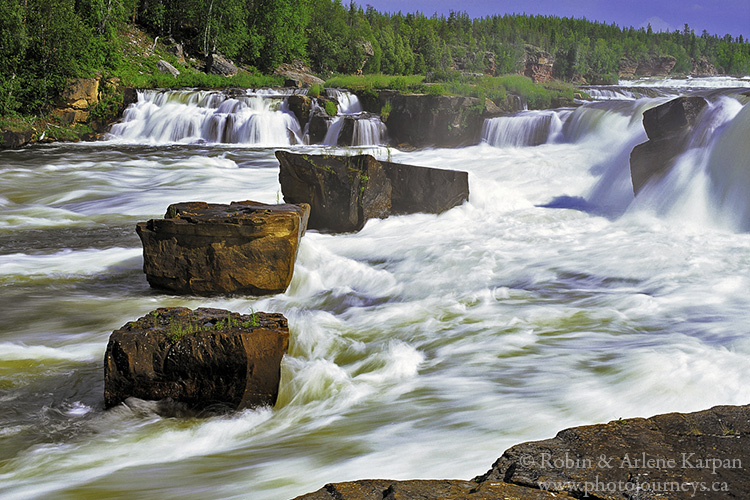 Manitou Falls is the highlight of the Fond du Lac River. Here the river takes an S-turn, carving its way through the soft sandstone. It’s also the nicest place to camp while canoeing the river.

The Wapiskau River is waterfall heaven. The narrow river flowing between Brabant Lake and the Reindeer River has a series of small falls and rapids in quick succession. Because of the many whitewater features, motorboats can’t navigate here, making this the perfect canoeing river. 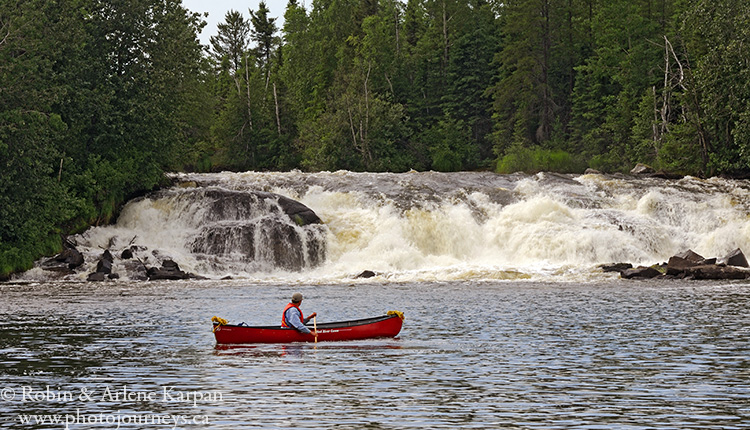 Nistowiak Falls is along the short Rapid River, which drains water from massive Lac La Ronge into the Churchill River. It’s one of the easiest waterfalls to visit, with a short canoe or boat trip from road’s end at Stanley Mission on the Churchill River. 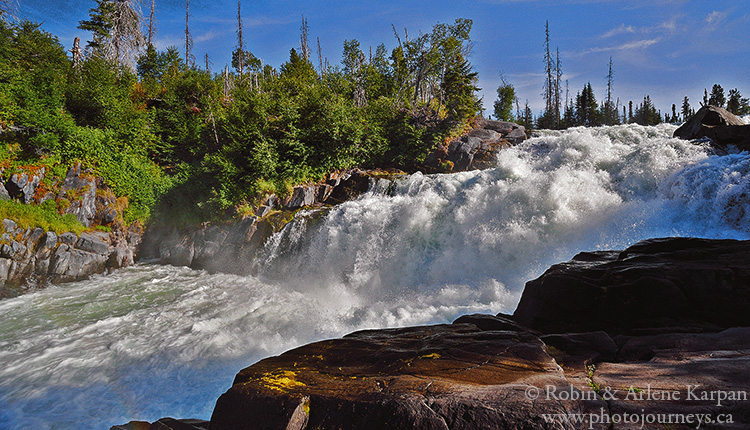 The Churchill River itself has several falls, such as here at Robertson Falls at the outlet of Otter Lake.

Our favourite Churchill River waterfall is definitely Kettle Falls, so-named because the constant spray from water in the expansive falls is like a boiling kettle. This is only one part of the falls that stretches across a small lake. 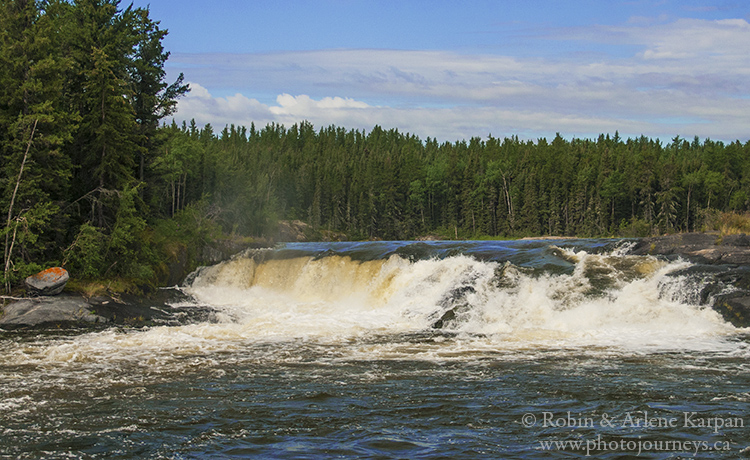 Kettle Falls is also home to the top camping spot along the Churchill, with level, treed places for tents, a flat rocky outcropping resembling a paved patio, and walleye to catch practically out your front door. 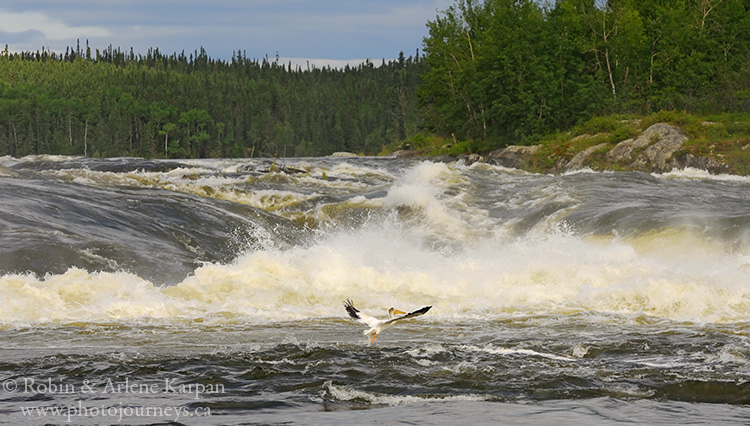 Feel free to PIN this article on Saskatchewan’s Most Beautiful Waterfalls from Photojourneys.ca 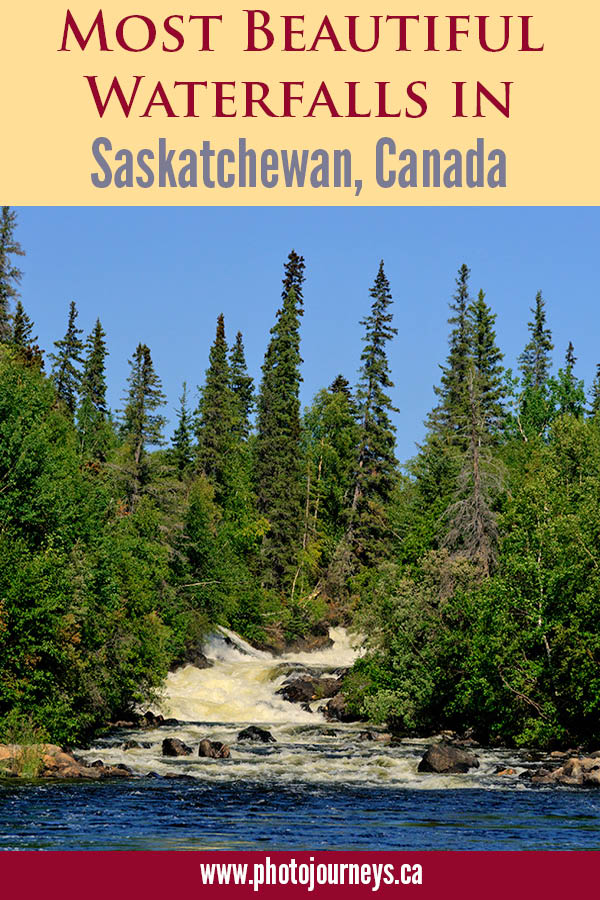 18 thoughts on “Saskatchewan’s Most Beautiful Waterfalls”