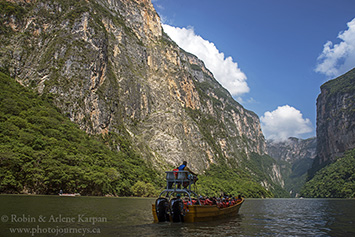 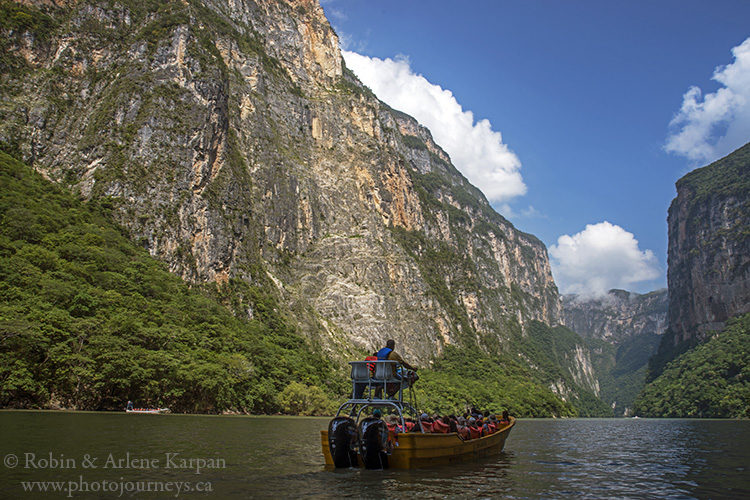 The Sumidero Canyon is one of Mexico’s most magnificent natural sites. The mighty Grijalva River slices through a major fault line, lined with massive vertical cliffs, some up to a kilometre straight up. You can enjoy the awesome scenery two different ways – from a boat trip through the canyon, as well as from road-accessible viewpoints along the canyon rim. And the best part is that visiting is both easy and very inexpensive. 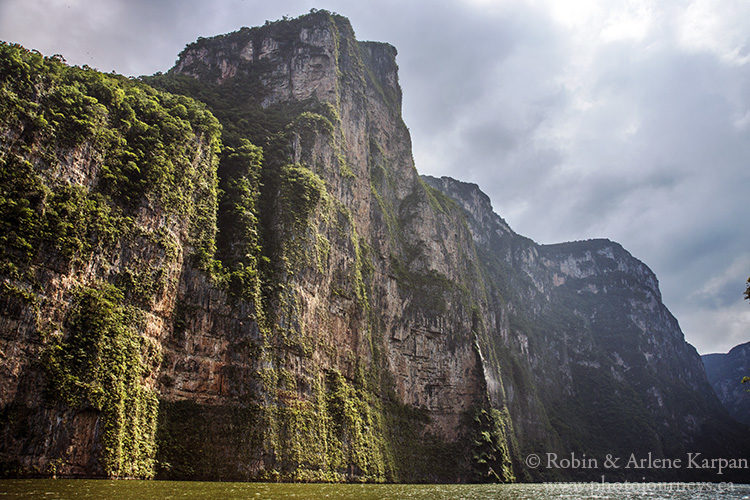 The canyon is near Tuxtla Gutierrez, capital of Chiapas, Mexico’s southernmost state. While canyon trips run from here, it is easier and cheaper to arrange in the attractive mountain town of San Cristobal de las Casas, less than an hour away. Since San Cristobal is much more popular with tourists, several tour companies offer daily trips, so you can easily book as little as a day ahead. We paid 350 Pesos each (about $23 CDN or $18 US) which included transport (pick up at our hotel), the boat trip, national park admission, and stops at three canyon rim viewpoints. 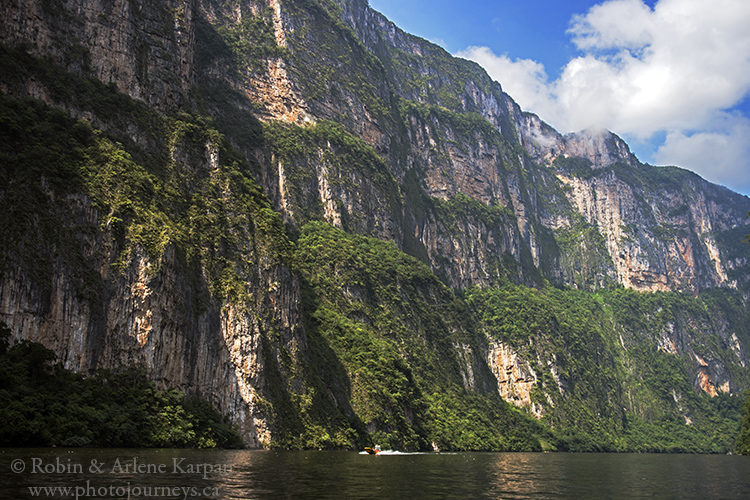 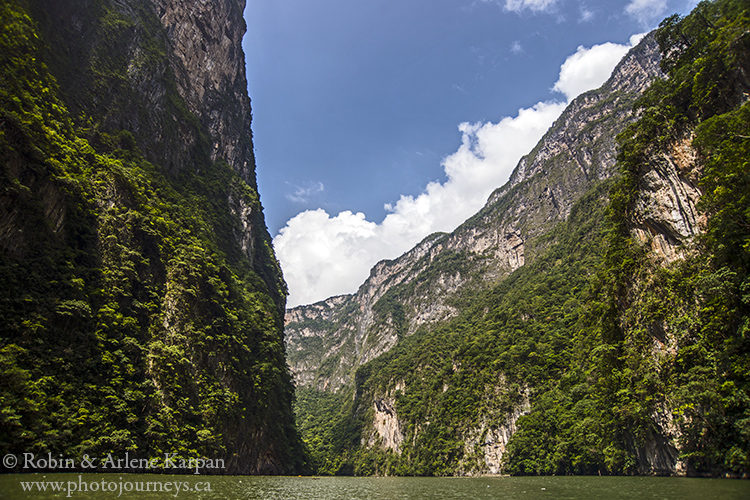 The boat trip starts at the dock in the town of Chiapa de Corzo, just outside Tuxtla Gutierrez. For two hours we cruised through the narrow canyon, as the river zigzagged between the towering cliffs, sometimes making 90 degree turns. The sheer rock faces, dotted with cactus in places, are bordered with dense green rainforest. Our boat captain stopped several times to give us a closer look at wildlife such as birds or spider monkeys, and to give a commentary (in Spanish) on the canyon. Even if you don’t understand Spanish, the tour is still definitely worthwhile to take in the amazing scenery.

We stopped at a few special features, such as the Cueva de Colores, or Cave of Colours where the boat could fit inside. It gets its name from the pink shades of minerals in the rock. A statue of the Virgin of Guadalupe stands in one of the niches, adorned with flowers left by visitors.

During the rainy season and soon after, waterfalls pour over the cliffs. The highlight is known as the Christmas Tree Waterfall, which was flowing more slowly during our November visit. The small waterfall seems to spring out of the sheer cliff face about halfway up, then spills over green, moss-layered rocks that look like Christmas tree branches. The boat captain eased the boat almost under the falls where we looked straight up at the fine mist being carried away by the gentle breeze. 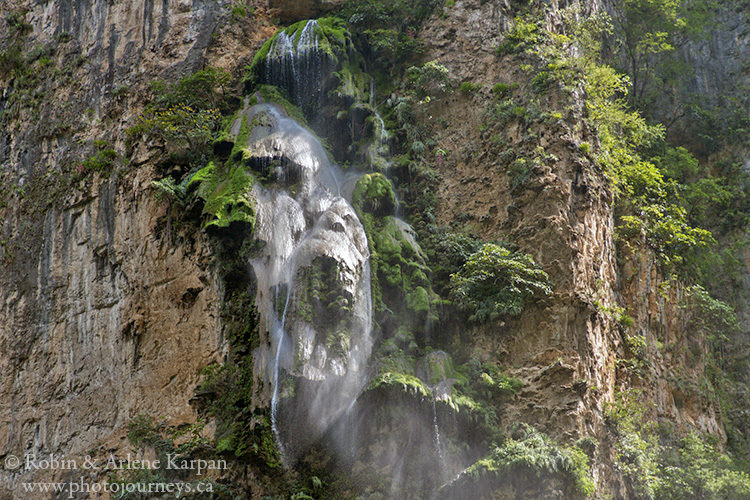 The turn-around point for the trip is the Chicoasen hydroelectic dam, one of Mexico’s most important sources of electricity. While it seemed as if we were travelling a wide river, it is actually the reservoir formed by the dam which flooded the canyon. Before the dam was built, the river through the canyon was not navigable. 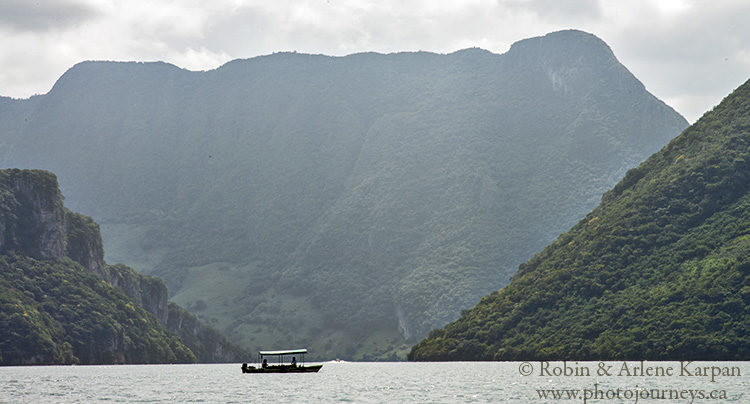 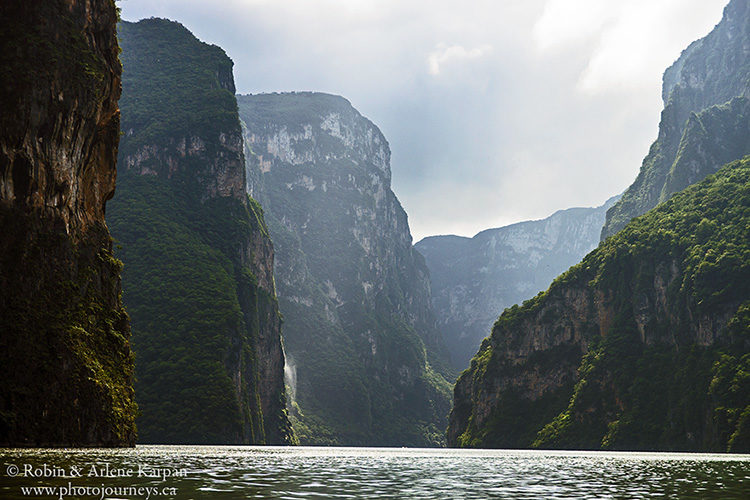 While the canyon is certainly impressive, it isn’t pristine. Unfortunately, you also see a lot of garbage floating in the river, especially plastic water bottles. While seeing litter is common in many parts of Mexico, here it is on a bigger scale, especially in the rainy season when debris gets washed into the river, then trapped by the narrow canyon walls and the dam. Apparently park staff constantly clean up the garbage, but it remains a significant problem. 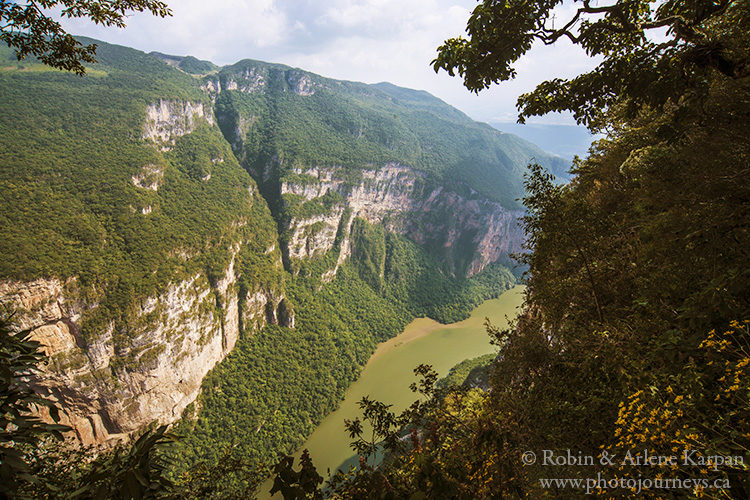 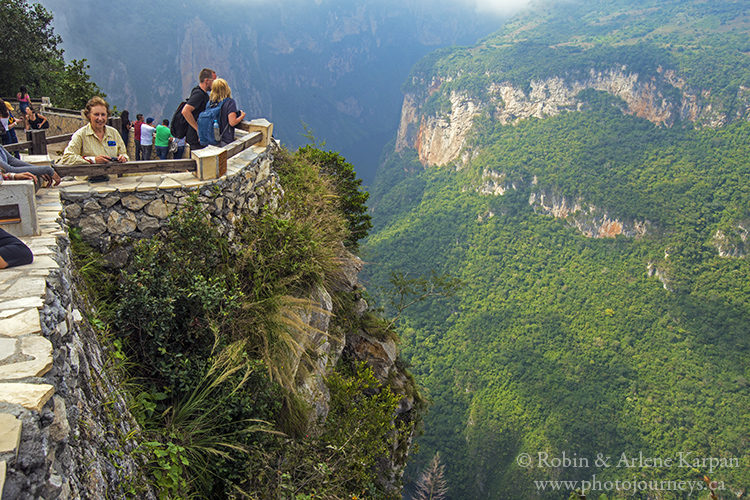 Seeing the Canyon from the Rim

Most tour companies offer two options – the boat tour only (for marginally less money), or a combination of boat tour and a drive to the canyon rim to look down from three viewpoints. It’s definitely worth going to the viewpoints as well, since the vistas can be just as breathtaking as from the water. Our van kept climbing and climbing as we left the lowlands and ventured into the fog and low-lying clouds that seemed to cling to the canyon rim. Conditions kept changing rapidly from completely socked-in fog with no visibility to slightly open windows through the clouds with glimpses of the river far below. 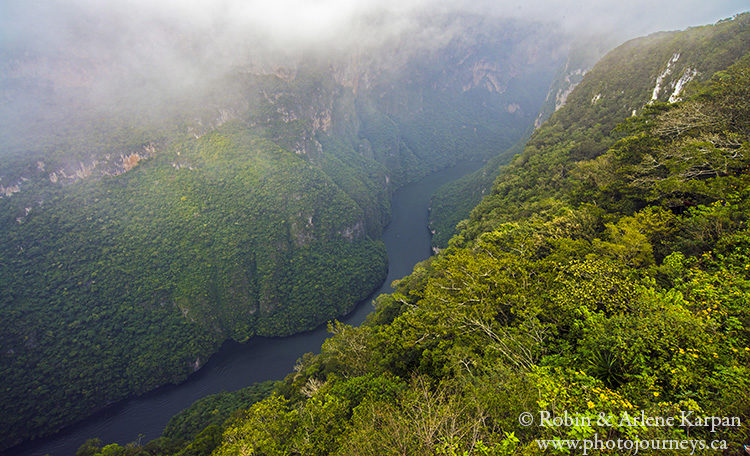 A common part of most tours is to stop for an hour or so in the sprawling main square of Chiapa de Corzo on the way back to San Cristobal. Chiapa de Corzo is an officially designated Pueblo Magico, or Magic Town, referring to its cultural and historical importance. Founded in 1528, it was the first Spanish community in Chiapas. The town’s iconic symbol is its imposing 16th century fountain that dominates the main square, the shape of which is said to resemble the Spanish crown. After a quick look around and a couple of tamales from a street-side stall, it was time for the drive back to San Cristobal, and an end to one of the best days of our trip. 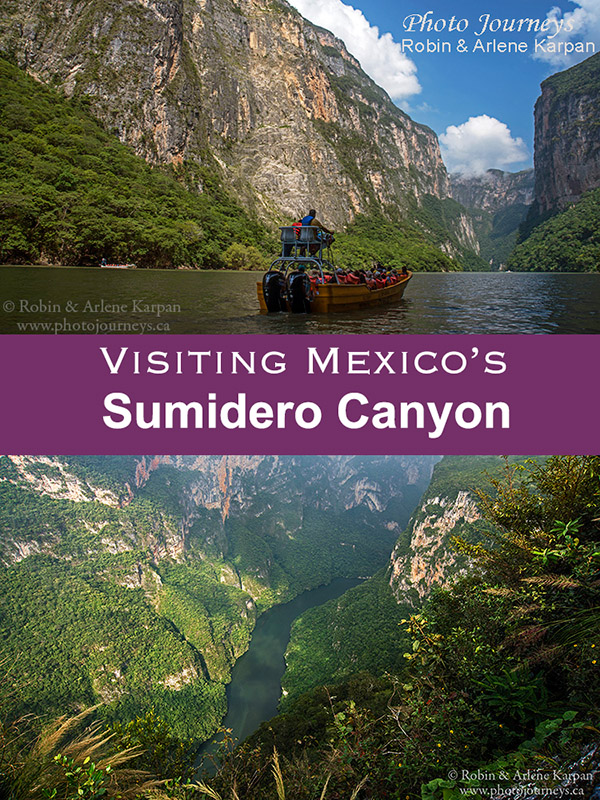