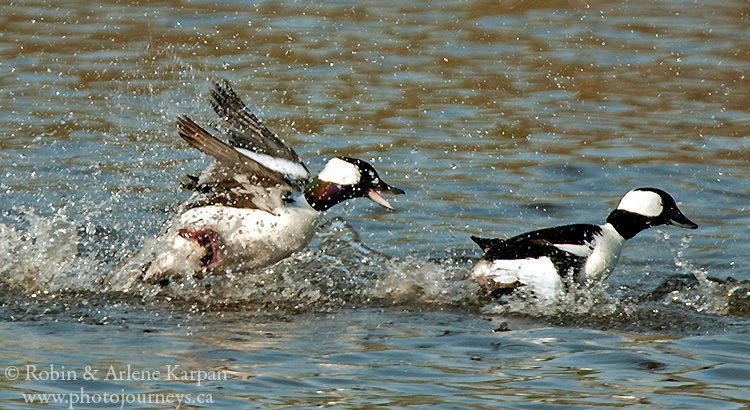 Two male buffleheads try to impress a female by running and splashing across the water.

Springtime in Saskatchewan brings one of the most exciting times for wildlife viewing and photography. While this is prime time for a variety of critters, where Saskatchewan really excels is the phenomenal bird activity and dazzling colour on and around its many ponds and wetlands. Many birds flaunt their finest spring regalia and are ready to party. The guys try to impress the gals by showing off and going through some intriguing, and sometimes bizarre, mating rituals. 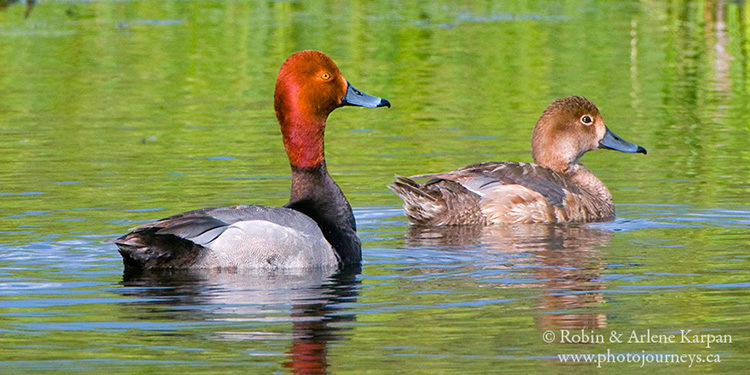 The best thing about photographing waterfowl and wetland birds in spring is that we find them practically everywhere. Hotspots abound such as Ducks Unlimited projects, national and provincial parks, heritage marshes, or national wildlife areas. But in spring it’s often a simple matter of going for a drive and stopping at some of the countless wetlands near the road. 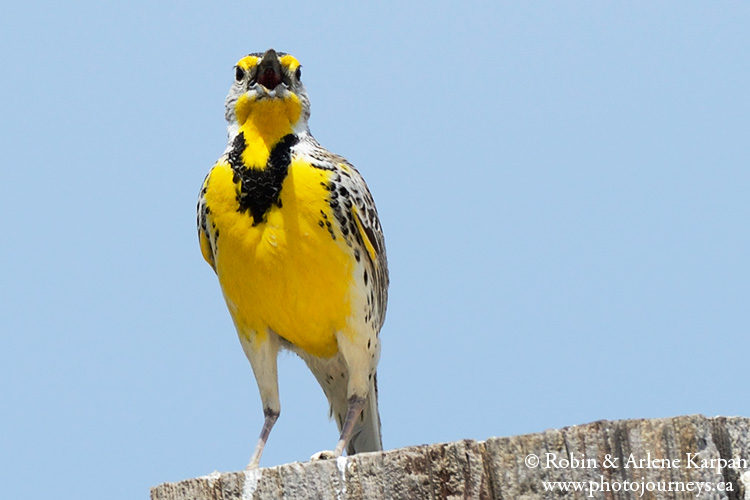 Saskatchewan has long been known as “North America’s Duck Factory”. One in four of the continent’s ducklings are raised here. In 2018, North America’s duck population numbered a bit over 41 million, which makes for a lot of quacking. For many species, such as mallards, canvasbacks, and redheads, Saskatchewan usually has more ducks than any other province or state, thanks to the proliferation of ponds, potholes, and wetlands that ducks like and need. 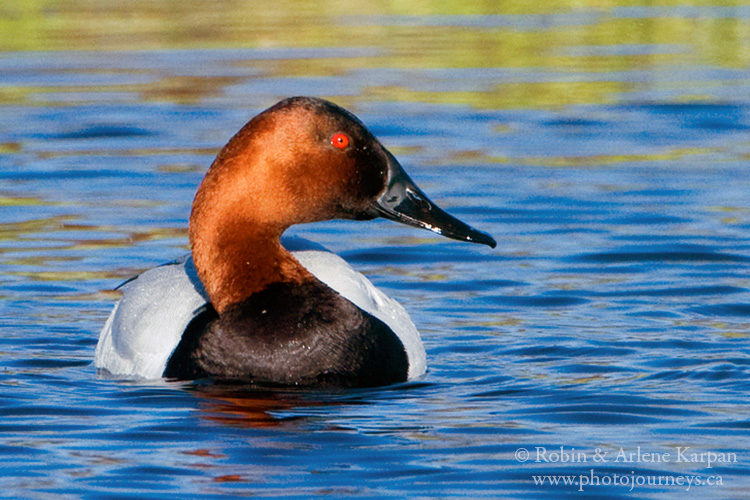 In 2018, there were around 3,600 May ponds in the prairie and parkland regions of Canada, over 1,900 of which were in Saskatchewan. Duck populations fluctuate with available water. In 2017, a wetter than normal year, North America’s duck numbers soared to over 47 million. A drought, on the other hand, can cause numbers to plummet. While drought is a temporary problem, a longer term issue is habitat loss through draining wetlands, urban sprawl and industry expansion. 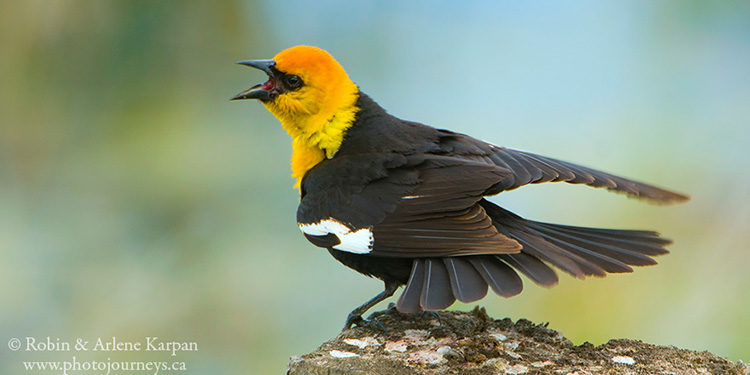 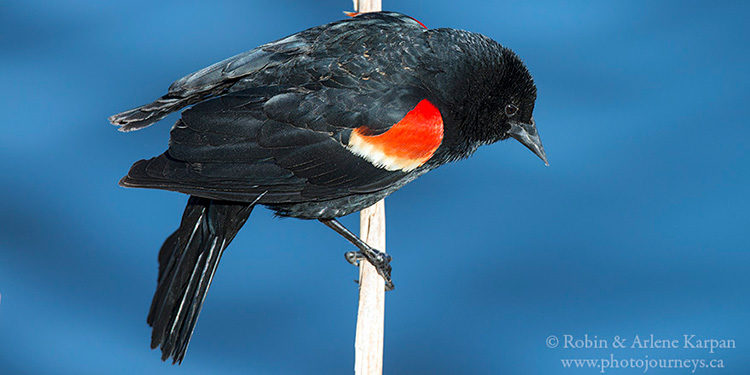 Much more than ducks

Wetlands attract a wide array of birds in addition to ducks. Grebes are among our favourites to photograph, such as red-necked grebes with their long elegant necks, or eared grebes and horned grebes with piercing red eyes. They tend to be a bit more relaxed than ducks, allowing you come closer for photography. Depending where you go, there are excellent chances of finding pelicans or shorebirds (which we will discuss in more detail in future postings). The adjoining uplands and bushes are also hubs of spring activity with songbirds, hawks, owls and more. Then there’s the rapid-fire foot-stomping dance of the sharp-tail grouse, Saskatchewan’s official bird emblem, and the drumming of the ruffed grouse that we can hear a kilometre away. 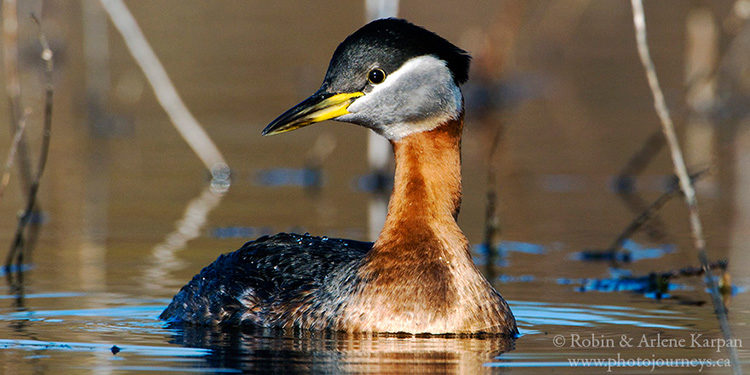 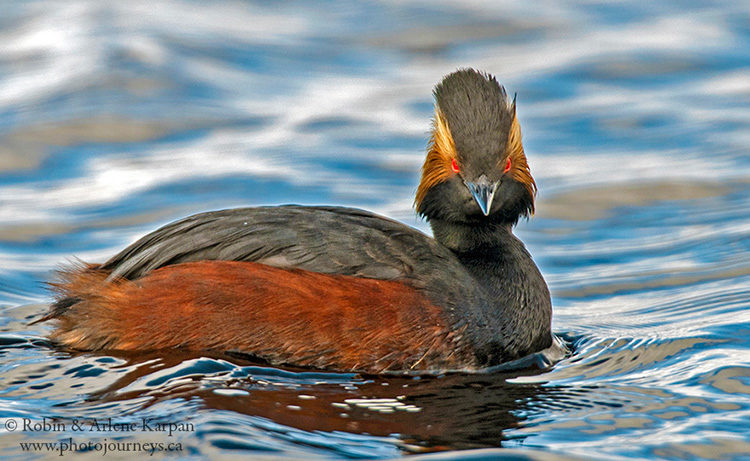 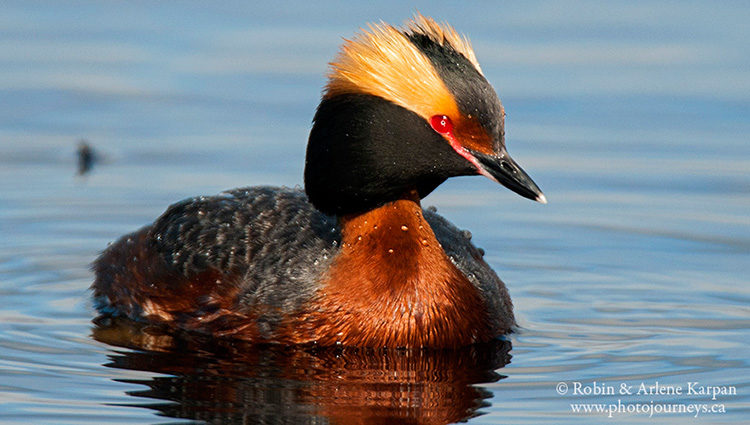 One of the most effective ways to photograph is from your car on backroads with little traffic. Or head to natural areas such as Last Mountain Lake National Wildlife Area (which, by the way, is North America’s oldest bird sanctuary) where the roads take you immediately beside bird-rich wetlands and lakeside. If you get out of your vehicle near a wetland, chances are that the birds will get spooked and fly off. But if you stay inside, many birds may continue going about their business and not be concerned. When photographing with a long telephoto lens from a vehicle, a beanbag is especially useful to keep the camera steady. That doesn’t mean that you should leave your tripod at home. Some birds, such as grebes, may be quite tolerant and let you stand by the edge of a pond. 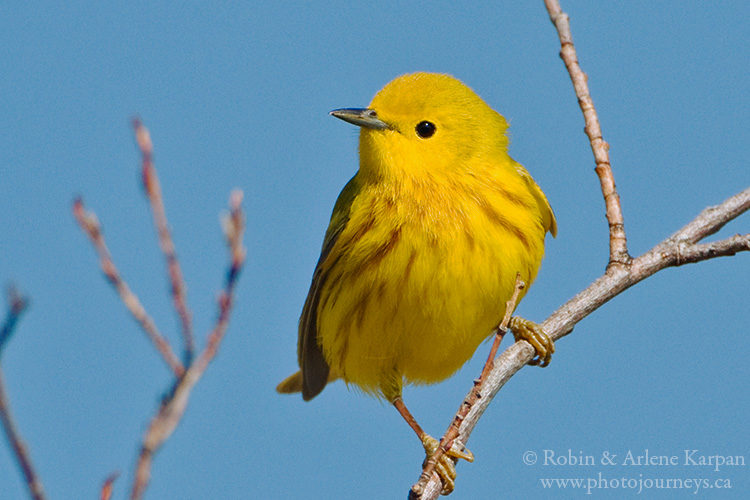 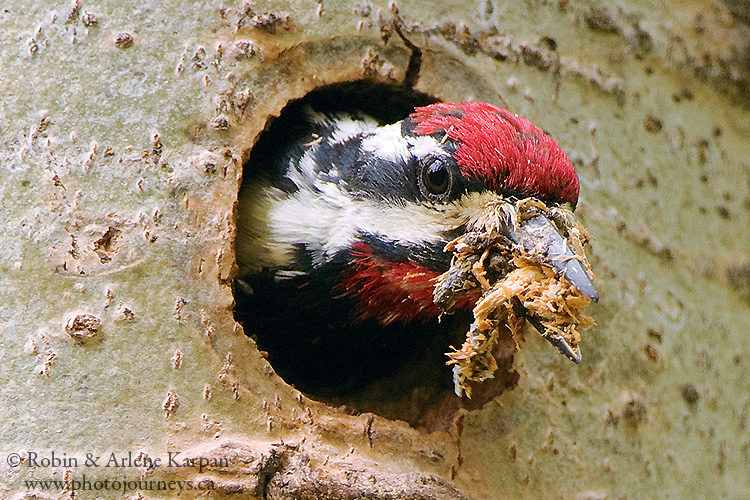 While portrait images of birds are fine, and sometimes great, the goal of most photographers is to capture some of the spring activity and rituals. One of the easier goings-on to find and photograph is the rather strange behaviour of the male ruddy duck who uses bubbles as part of his act. He inflates an air sac in his thick neck then pumps his brilliant, sky-blue bill up and down, whacking the underside of the bill against the inflated neck. This produces a drumming sound as well as an impressive array of bubbles. He finishes by opening his bill and belching. What female wouldn’t be impressed? 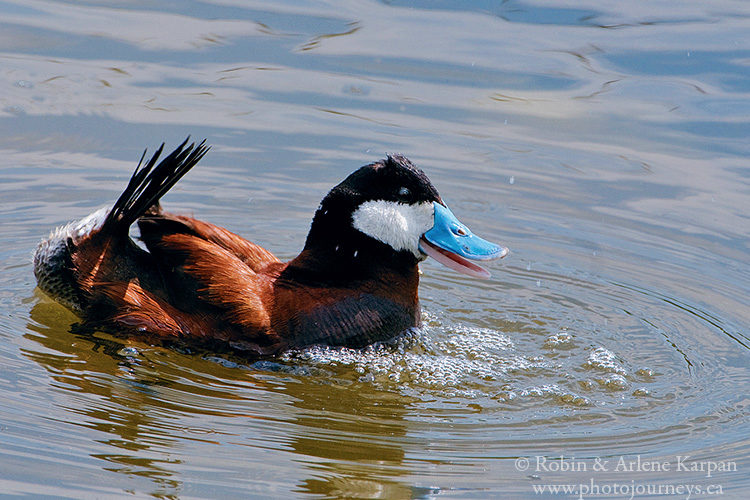 Male ruddy duck with his bubbles and belching routine. 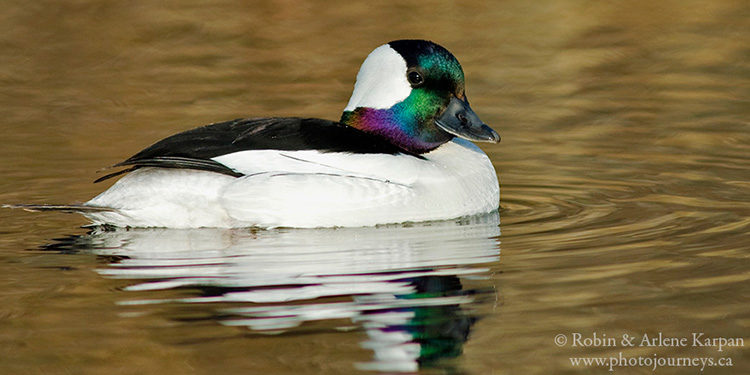 A more difficult ritual to capture is the fast and furious “running on water” display of buffleheads. These are our smallest diving ducks, and they nest in trees. The male isn’t especially flashy, except in the spring when he turns just the right way and the light catches the iridescent mix of purple, violet, and green on his neck. Part of the mating display is for couples or competing males to half-run and half-fly across the surface of the water, making a big fuss and creating the biggest possible splashes. This happens extremely quickly and with little warning, so it’s necessary to be ready and have a high shutter speed to stop the action. 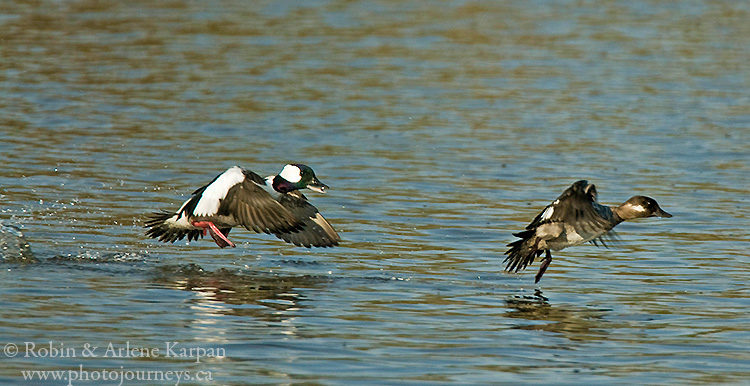 The most exciting part is that surprises are around every corner. So pick a backroad that passes ponds and wetlands and see what you can come up with. You might not find exactly what you were looking for, but at this time of year it’s almost impossible to be disappointed. For ideas on some specific places to go for wildlife, nature, and scenic landscapes, check out the Photographer’s Guide to Saskatchewan. 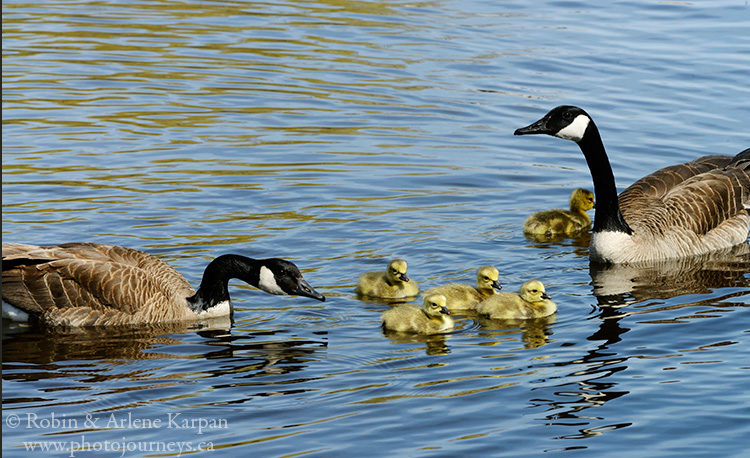 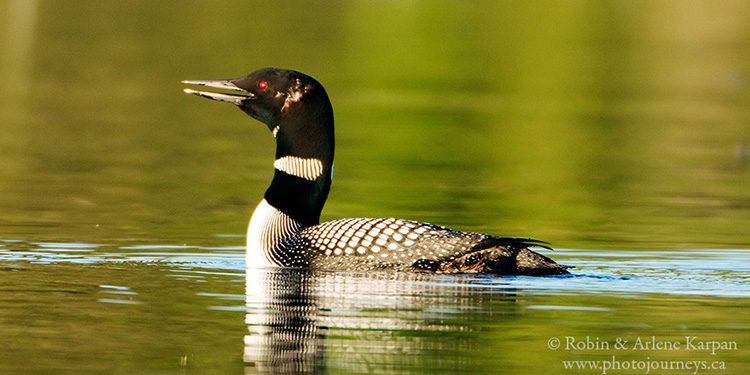 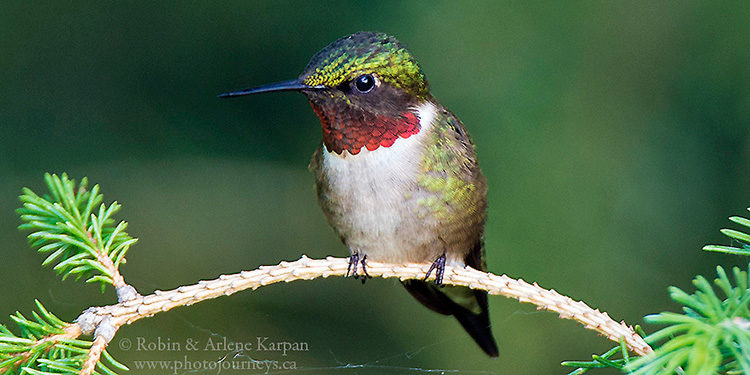 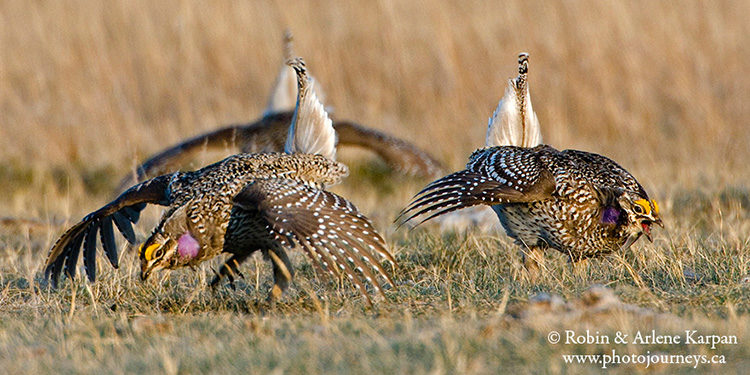 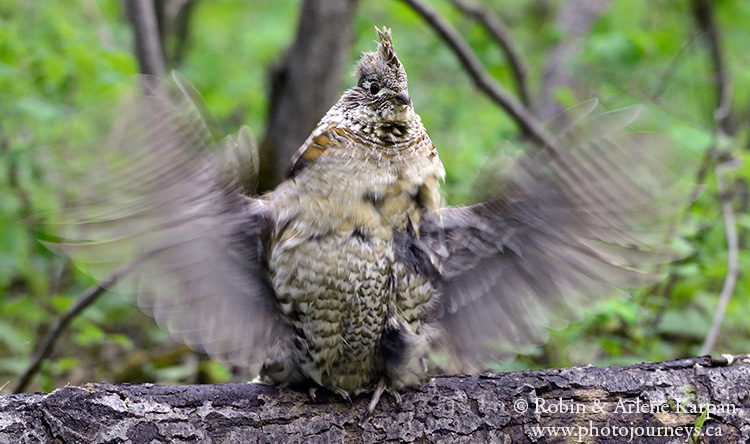 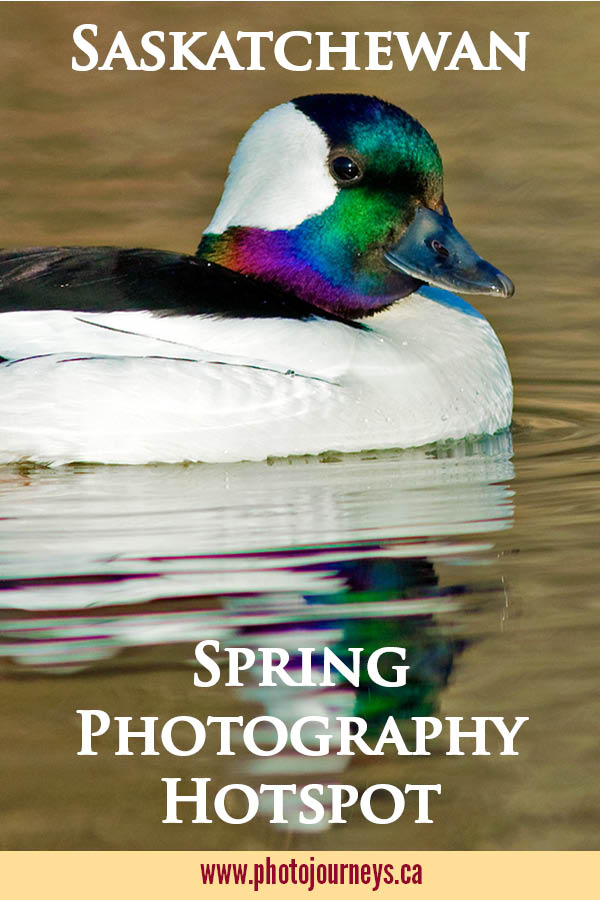