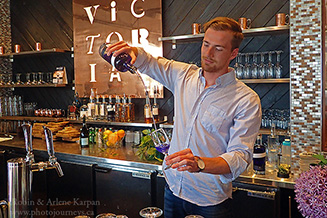 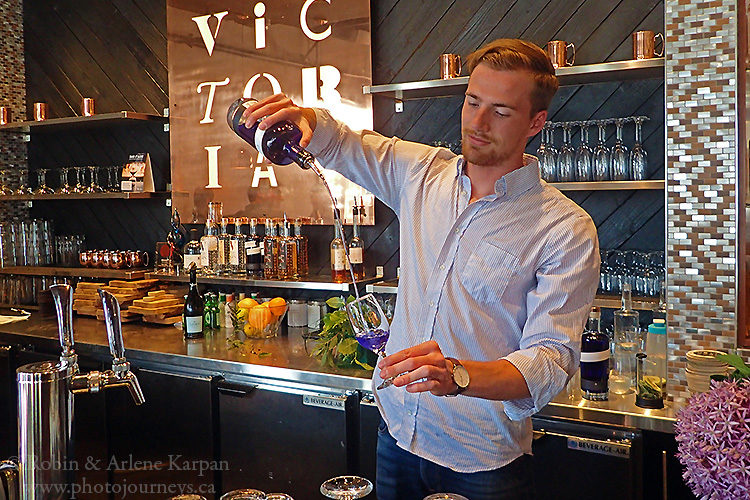 Tasting gin and cider in the Saanich Peninsula turned out to be one of the most pleasant afternoons we spent while visiting Victoria, BC. Our introduction to the region’s most famous gin came the day before with a knock on our door at the Fairmont Empress Hotel in Victoria. The hotel had sent a small sample of Empress 1908 gin (named for the year the iconic hotel was built), along with a fancy teacup emblazoned with the Empress crown logo, tonic water, and two pieces of grapefruit peel that curled around the base of the cup.

Along with it was a card explaining how best to enjoy Empress gin – add some tonic water to taste, plus a piece of grapefruit peel. And yes, it is meant to be drunk from the tea cup. The gin has an intriguing colour, a cross between royal purple and indigo blue. But as soon we added the tonic and grapefruit peel, it magically changed colour to a soft pink. The gin reacting with other ingredients including citrus and tonic causes the change, and you could expect almost any shade between pink and soft mauve depending on what you add to the gin. But there’s more to this drink than just a pretty face. The colour is the result of a combination of ingredients that makes this much more flavourful than your average gin.

To find out more, we headed to the source – Victoria Distillers in Sidney, an hour or so north of Victoria along the Saanich Peninsula. The distillery overlooks the waterfront, with an on-site lounge and patio, and tours where you can see how the award-winning gin is made. While the distillery might be synonymous with Empress 1908 gin, they also make a range of other spirits including hemp liqueur, chocolate liqueur, and rum, along with other gins.

Connor McCann, tour master and bartender with Victoria Distillers, showed us around. The cornerstone of their operation is a large hand-hammered copper still that they purchased from Germany. So what’s with the purple colour, we asked. Turns out it’s butterfly pea blossoms primarily, plus a host of other natural botanicals that contribute to the perfect mix – cinnamon bark, ginger root, Fairmont Empress Blend Tea, rose petals, grapefruit peel, coriander seed, and juniper berries.

In the tasting room, Connor prepared samples for us to try, along with suggestions on how to appreciate the nuances of the various drinks. One that stood out was the Oaken Gin, which has also done well in competitions. As the name suggests, it’s aged in oak, giving it a slight amber tinge with hints of vanilla and caramel. 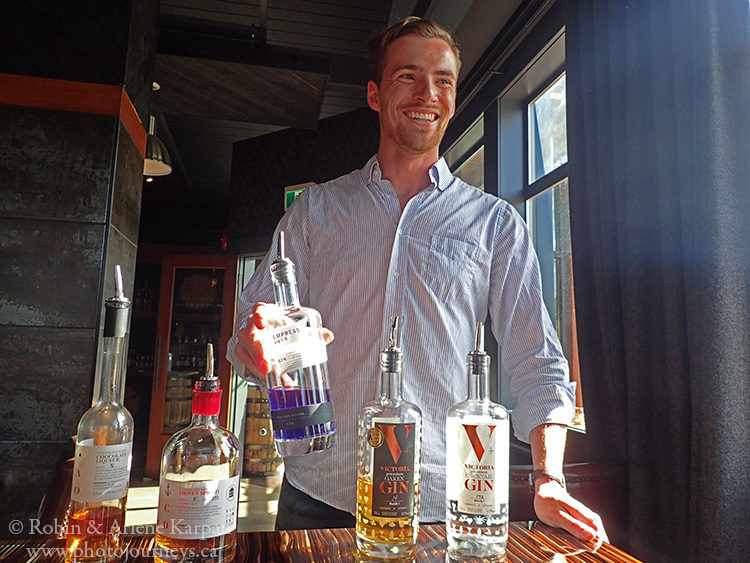 While there were some tasty tipples, almost everyone in our group agreed that it’s hard to beat the sophisticated look and unique taste of Empress 1908. The Fairmont Empress Hotel had long been famous for its elegant afternoon tea, which inspired the idea of developing a drink that would have the same pizazz. But as Conner put it, “This is even better than tea.”

It’s only a stone’s throw away to Sea Cider Farm & Ciderhouse in Saanichton. Our guide Brandi showed us the lay of the land on the 10-acre property – the orchard, forest on one side, and the east-facing slope that provides good air circulation from Haro Strait. More than 50 varieties of heritage apple trees are grown in the orchard including their prized bittersweet apples, along with sweets, sharps, and bittersharps. Each variety imparts different flavours and characters to the ciders. 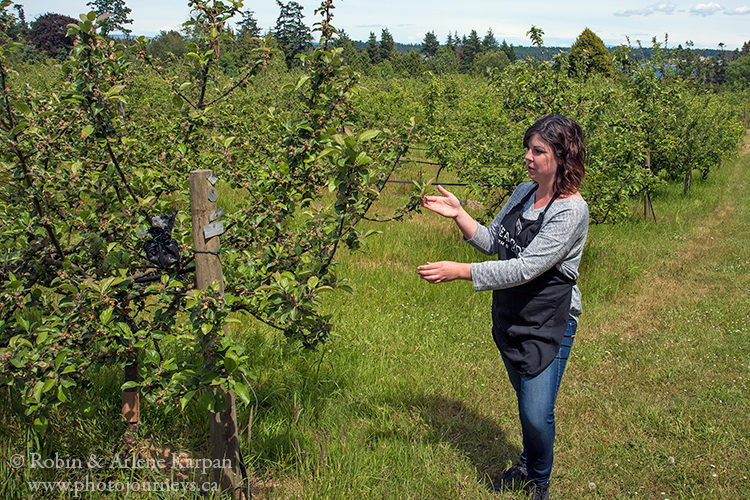 Sea Cider prides itself as being a certified organic farm every step of the way. They keep diseases at bay by careful maintenance, use drip irrigation, and compost for fertilizer. The trees are kept small so it’s easier to pick the apples. It looked tempting to sample the fruit, but raw cider apples have a very bitter taste.

In the fall, they harvest the crop and begin pressing the apples to extract the juices. In their on-site plant, they process and mix the juices, which remain in the tanks between 4-8 weeks. Cider doesn’t have a long shelf life, Brandi explained. It’s best consumed soon after you purchase it, but at most, it can last up to about a year. 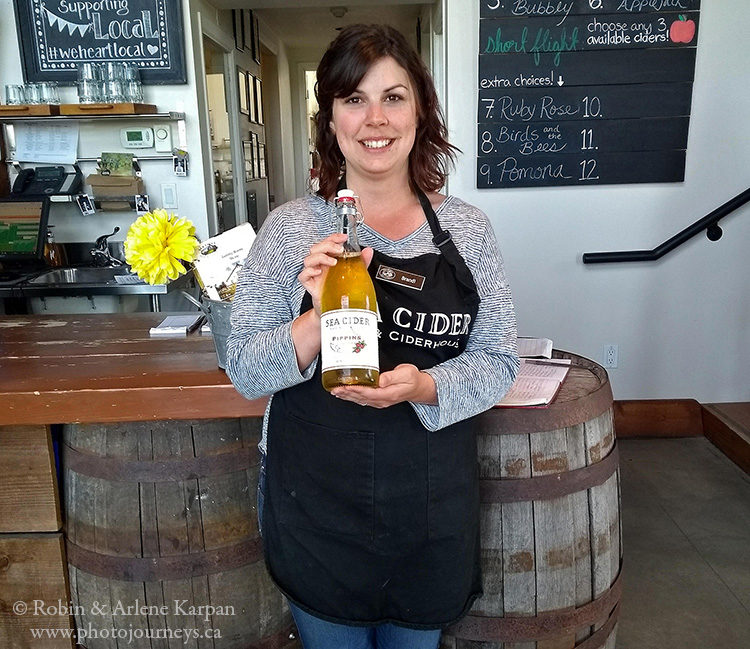 Back in the tasting room, the table was set with plates of local cheese and sausage, bread, and crackers. We sampled several ciders starting with the driest, and ending with the sweetest. Flagship Cider came first, so named because it was the first cider they made. Produced entirely without sulphites, it is crisp and super dry with slightly smokey overtones. More strong and robust was Pippins, followed by Bramble Bubbly with its lovely blushing colour that comes from blackberries. We ended with Rumrunner, aged for at least six months in rum-soaked bourbon barrels. It was quite an eye-opener, showing cider’s surprising variations, flavours. and complexities. As they say at Sea Cider, this is “Where Apples Live the Good Life”.

For further information on Victoria’s many attractions, visit Tourism Victoria. 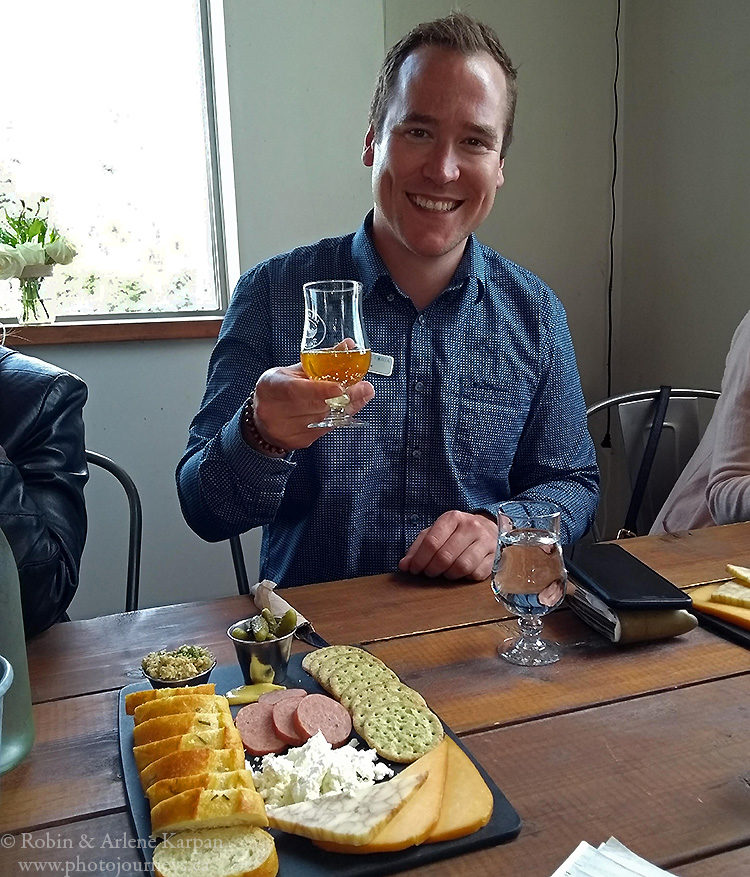 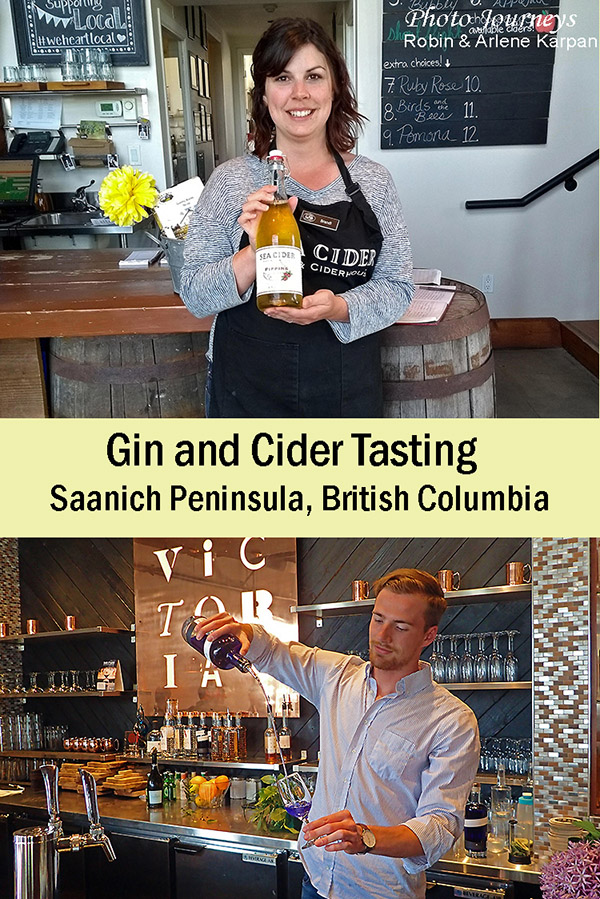