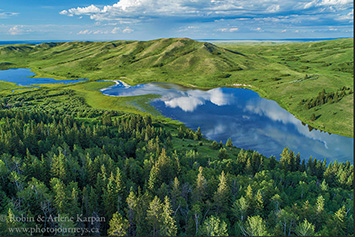 What’s so special about Saskatchewan for landscape photography? The possibilities are as boundless as the Saskatchewan sky, with everything from herds of primeval bison roaming open grasslands of the deep south, to jaw-dropping remote waterfalls of the far north. In between are some of Canada’s baddest badlands, drifting dunes, enchanting river valleys, whimsically sculpted sandstone formations, bird-rich wetlands, and massive hard rock cliffs of Precambrian Shield.

Then there are those extraordinary landscapes that don’t fit neatly into categories – the Cypress Hills with its delightful mix of highlands, grasslands, and forest, or the other-worldly Crooked Bush that seems straight from the pages of a fantasy novel.

This is “the” place to photograph wild prairie. Saskatchewan has some of the largest expanses of rare native grasslands left in North America, including the stunning and easily accessible landscapes of Grasslands National Park. Among the many other prairie possibilities are the Great Sand Hills, Saskatchewan Landing Provincial Park, or the Old Man on His Back Plateau managed by the Nature Conservancy of Canada.

Saskatchewan is, hands down, the sand dune capital of Canada – home to both the largest (Athabasca Sand Dunes) and second largest (Great Sand Hills) dune fields in the country, plus a few others thrown in for variety. But it’s not just size that matters. The Athabasca Sand Dunes are unique in the world. Most great sand dunes are in deserts or at least arid settings. But here a desert-like terrain is seemingly misplaced in the midst of boreal forest and lakelands, bordered by one of Canada’s largest lakes, and sliced by three rivers. Remarkably, the best way to explore deep into these dunes is by canoe! How cool is that?

While the Athabasca Sand Dunes are remote and take a bit of effort to reach, the Great Sand Hills are so easy to get to that you simply drive right up to them. Similarly, the sand dunes of Douglas Provincial Park near Lake Diefenbaker are easily accessible via a short hiking trail. You visit the dunes of Good Spirit Lake Provincial Park by taking a walk along a gorgeous beach. For more details, see our posting on Exploring Saskatchewan’s Athabasca Sand Dunes and Saskatchewan is the Sand Dune Capital of Canada. 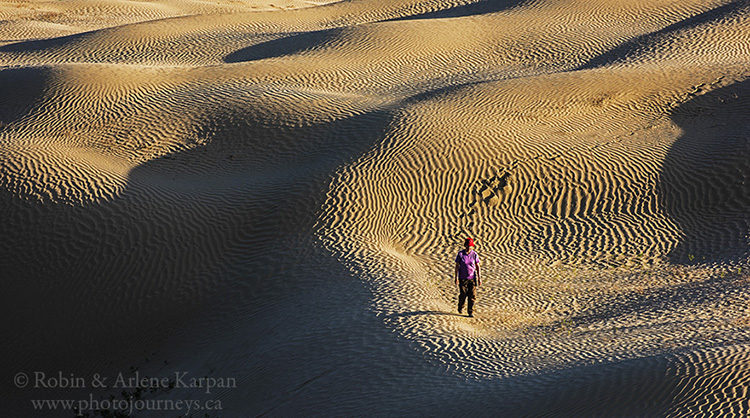 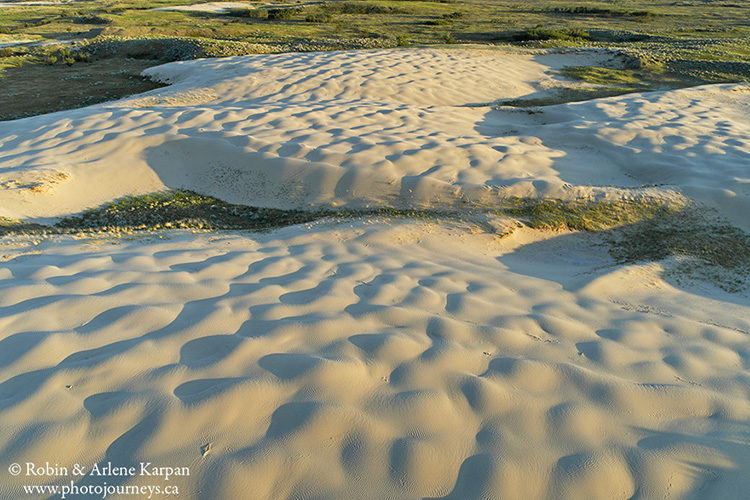 Badland formations occur throughout southern Saskatchewan, three of which shouldn’t be missed. The Big Muddy Badlands not only feature striking scenery, but have a colourful history where outlaws the likes of Butch Cassidy used to hide out. The highlight is massive Castle Butte which takes on a scarlet glow at sunrise and sunset. We used an image of Castle Butte at sunrise for the cover of The Great Saskatchewan Bucket List. Our image of Castle Butte at sunset is currently being used on a postage stamp, as part of Canada Post’s From Far and Wide series, featuring nine iconic Canadian landscapes. 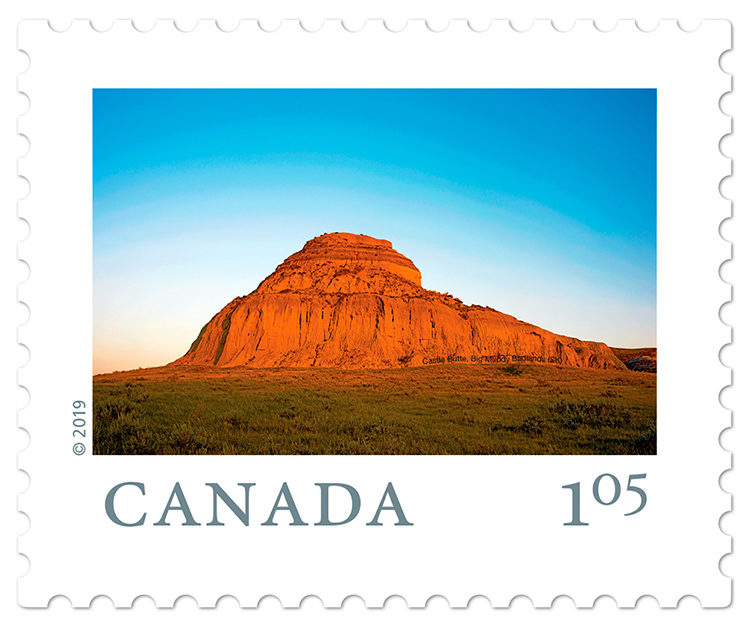 The Avonlea Badlands pack a lot of variety into a small area, where normal-looking pastureland suddenly drops away into an enchanted valley of weathered buttes, hoodoos, and strange pillar formations. 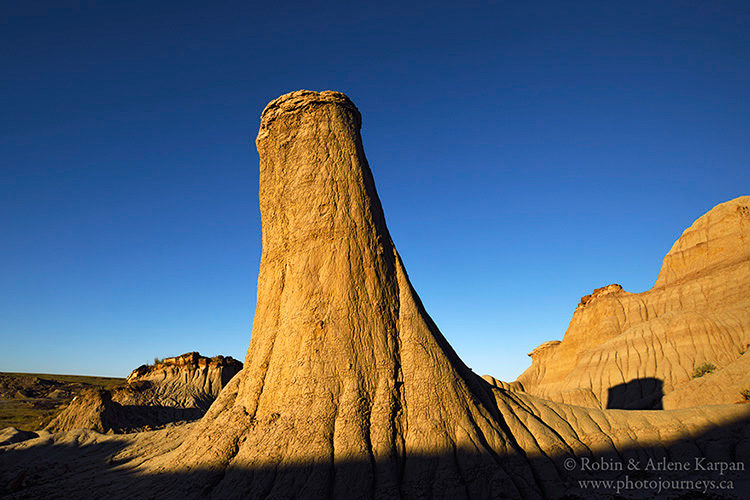 The big daddy of them all are the Killdeer Badlands in the east block of Grasslands National Park, where an easily accessible viewpoint looks over a vast landscape of jumbled buttes and deep gullies, one of which is known as the Valley of 1,000 Devils. The viewpoint, ideal for both sunrise and sunset photography, ranks among the top photogenic spots in Saskatchewan. For a more detailed discussion of these sites, see our posting Where to Find Saskatchewan’s Baddest Badlands.

Saskatchewan is well known as the farming heartland of Canada, with ample opportunities to incorporate rural scenes into your photography. To add a splash of colour to images, it’s hard to beat the rich yellow hues of canola fields, usually at its peak for flowering in July. With over 10 million acres planted in Saskatchewan (half of Canada’s production), you won’t have any trouble finding canola. We often look for contrasting elements, such as yellow fields against green hills (such as in the Qu’Appelle Valley), or interesting features such as old farm buildings, grain elevators, or country churches. Our favourite is finding canola next to brilliant blue flax crops, for an attractive juxtaposition of primary colours.

Much of Saskatchewan’s north remains pristine – a vast forested land of 100,000 lakes and a mind-boggling array of interconnected rivers made legendary during the fur trade, and chronicled by a who’s who of northern exploration from Mackenzie to Franklin and countless voyageurs. Today, it ranks among the great canoeing destinations, serving up adrenaline-pumping whitewater and soul-soothing tranquility lost to most of the world.

Northern possibilities are practically endless – the historic Churchill River, the magnificent valley and waterfalls of the Clearwater River, the whimsical sandstone formations on the Fond du Lac River, or the remote, mountain-like landscapes along the Porcupine River. The north shore of Lake Athabasca is different again, with a maze of islands, hidden bays, and colourful cliff faces – all of which see extremely few people.

It’s All About the Light

For photographers, the nature of the light is as important as the scenery. This is where Saskatchewan really shines. The Land of Living Skies slogan lives up to its hype, with clear air, skies of the bluest blue, more hours of sunshine than practically anywhere in the country, and the thrilling drama of sudden summer storms. Sunrises and sunsets are simply the most dazzling on the planet.

Dark sky preserves here are among the largest and darkest in the country, helping you to capture the full magnificence of the night sky. Venture to the north, or even to many remote rural areas in the south, and the lack of light pollution makes the skies dark by default – no official designations required.

We have photographed in many incredible places throughout the world, but when it comes to the quality of the light, we’ve found few places to match what we enjoy close to home.

Leave the Crowds Behind

The biggest bonus of all? We almost never have to contend with crowds. Many avid photographers have ventured to famous photogenic sites only to find throngs of people with cameras jostling for space to take exactly the same shot that has already been taken a gazillion times. You won’t have to worry about that here, at least not yet. While an increasing number of savvy photographers are exploring Saskatchewan, this still remains relatively undiscovered territory for shutterbugs. It’s not at all unusual to visit amazing spots and find that you’re the only photographer around, increasing the odds of bagging that killer one-of-a-kind shot. 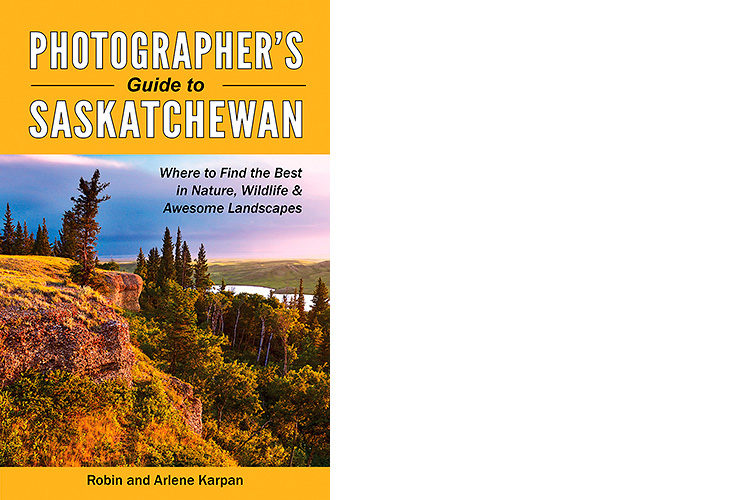 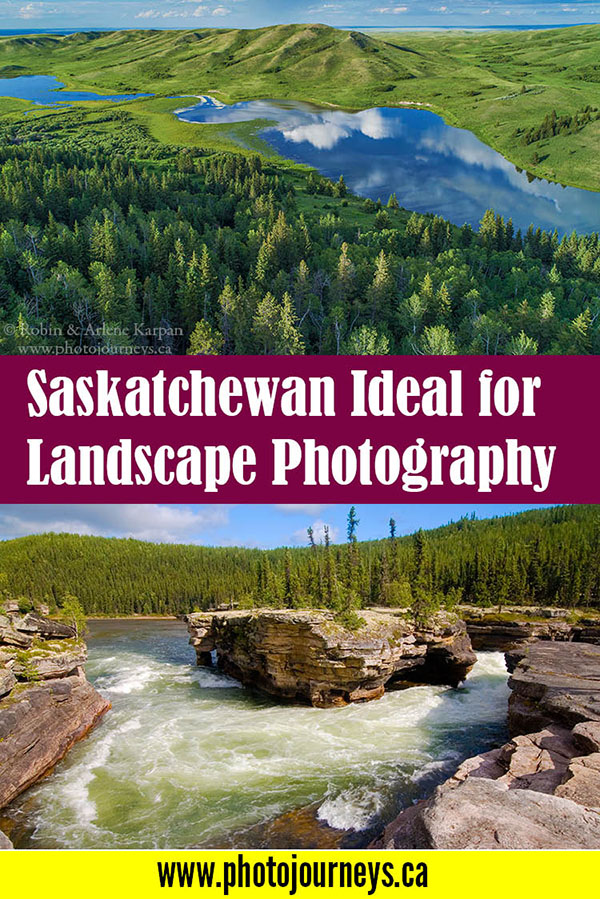