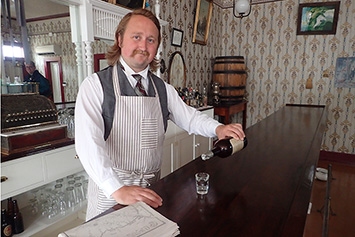 Dawson City is a fundamental part of the Canadian psyche. Just think of the North and this icon of the Klondike Gold Rush springs to mind. In the late 1800s, it seemed that the entire world was stampeding to the Yukon, where fortunes were both made and lost.

Almost overnight, Dawson City became the largest Canadian city west of Winnipeg, complete with larger-than-life characters, and where writers the likes of Robert Service and Jack London transformed Yukon into a land of mythic proportions.

Visiting today provides a taste of those heady times, with much of the town restored to the gold rush glory days. Don’t expect a staid museum piece; we found the Dawson City of today just as intriguing as its illustrious past.

Parks Canada’s Then and Now walking tour sets the stage. We wandered the wooden sidewalks accompanied by a guide, who talked about the present, and along the way kept meeting another guide in period costume who played different Klondike-era characters.

While some historic buildings are museums, most are still used as businesses. Impossible to miss is the gaudy pink Westminster Hotel. Built in 1898, it has long been the town’s most famous watering hole. Its bar is known as the Pit, though previously the two parts of the bar were called the Snake Pit and the Arm Pit.

If you prefer your drinks on the exotic side, stagger over to the Sourdough Saloon in the Downtown Hotel, home to the infamous Sourtoe Cocktail. The drink is garnished with a human toe, and to drink it properly, the pickled toe must touch your lips. As Robert Service observed, “There are strange things done in the midnight sun…”

The most popular night spot is undoubtedly Diamond Tooth Gerties, noteworthy as Canada’s first legal gambling hall. Nightly performances feature gold rush era entertainment including high-kicking can-can dancers, and songs by Gertie herself, a mythical character who was said to have a diamond wedged in her teeth, and who used her charms to relieve miners of their gold.

A few blocks away sits the simple cabin where Robert Service lived. Known as the “Bard of the Yukon,” his poems such as The Cremation of Sam McGee popularized the gold rush and the Canadian north.

Almost next door is Jack London’s cabin, moved here from where the young, yet to be famous writer, tried his hand at prospecting. London struck it rich, not by gold mining but through his books such as Call of the Wild and White Fang, inspired by his Yukon experience.

A short drive out of town along Bonanza Creek and the Klondike River takes you to where it all began. It was here in 1896 that George Carmack, Dawson Charlie, and Skookum Jim first found gold, setting off the rush. If you have ever dreamed about being a Yukon gold prospector, there’s even a short stretch of water where the public is allowed to pan for gold for free. Along the way you can visit Dredge No. 4, dating to 1912 and now an historic site, showing how mining later became mechanized. It’s not all about history, however. Look into the surrounding hills and you see modern-day machinery at work. There are still those who moil for gold and dream of striking it rich.

Paddlewheelers were once the lifeline of the Yukon River, although today the Klondike Spirit is the only one running. It takes tourists cruising from Dawson City to the paddlewheeler graveyard, where once magnificent riverboats were left to die, and to the confluence with the Klondike River. The young woman providing the cruise commentary covered Dawson City’s history, but even more interesting were her tales of life today. She lives in West Dawson, just across the river from Dawson City. Unlike the main town, this area is completely off-grid, with no power or other utilities and long winter hours spent cutting wood and melting snow for water.

Getting into town from West Dawson in summer is easy on the ferry, and in the dead of winter it’s possible to cross the frozen river. Things get tricky in spring and fall when there’s too much ice for the ferry and not enough to walk across. Residents must be well-stocked with supplies. A helicopter comes for medical emergencies, although there was one drawn-out spring when residents chartered a chopper when they were running perilously low on beer.

For the ultimate in off-grid living, our guide showed us a Canadian flag stuck into the ground and an upturned canoe on the shoreline. It marked the home of Caveman Bill who lives in a riverbank cave. It seems that Dawson City hasn’t lost its touch when it comes to colourful characters. 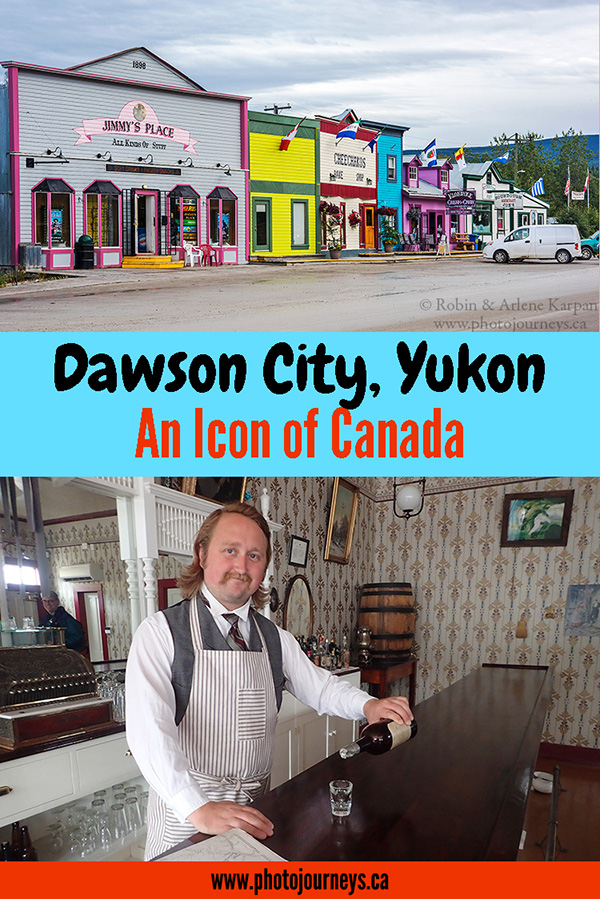