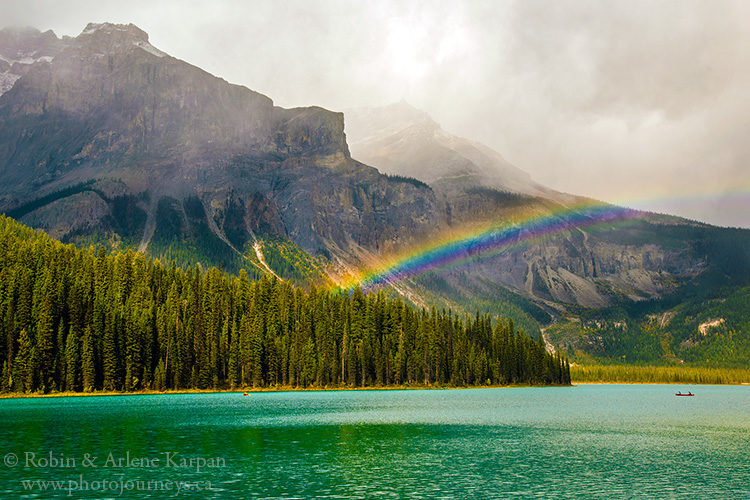 Rainbow over Emerald Lake. We had a lot of cloudy, rainy weather during our trip. However, on the bright side, we were treated to rainbows.

British Columbia’s Yoho National Park ranks among Canada’s most magnificent landscapes. The name says it all – Yoho is a Cree word expressing awe and wonder. While that may describe many places in the Rocky Mountains, things here seem cranked up another notch, with 36 peaks soaring over 3,000 metres, raging rivers and waterfalls galore, and postcard views at every turn. It had been three years since we last visited the park and wrote about it, so a return trip this fall was a welcome chance to update our photography and experiences. 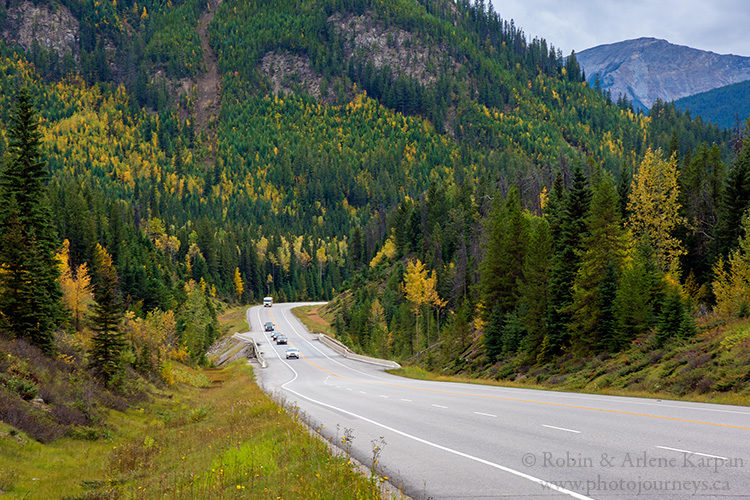 Yoho straddles the Trans Canada Highway, a short drive west of Lake Louise in Banff National Park. It may be the smallest of the cluster of four national parks in the Rockies (Banff, Jasper, Kootenay, and Yoho), but it delivers more than its fair share of stunning scenery. Over 400 kilometres of hiking trails lead into the rugged backcountry. The park is famous for the Burgess Shale fossils – over 500 million years old and a reason why this area is a UNESCO World Heritage Site. While some of the backcountry takes a fair amount of effort to reach, a surprising number of natural wonders are easy to access and enjoy. 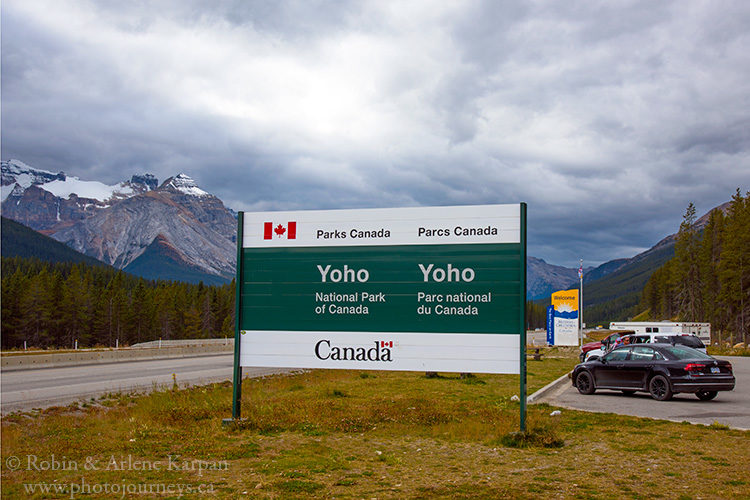 Chief among these is Yoho Valley Road to Takakkaw Falls. Open late June to early October, this 14-kilometre road packs a lot into a short distance. Near the beginning, we come to the Kicking Horse Campground, the park’s largest campground, and the only road-accessible one open during our late September visit. Both here and a bit farther along, roadside pull-offs offer views along the Kicking Horse River, designated a Canadian Heritage River for its stunning scenery, wealth of fossils, and its role in Canadian history when Kicking Horse Pass was chosen as the Canadian Pacific Railway’s route across the Rockies. 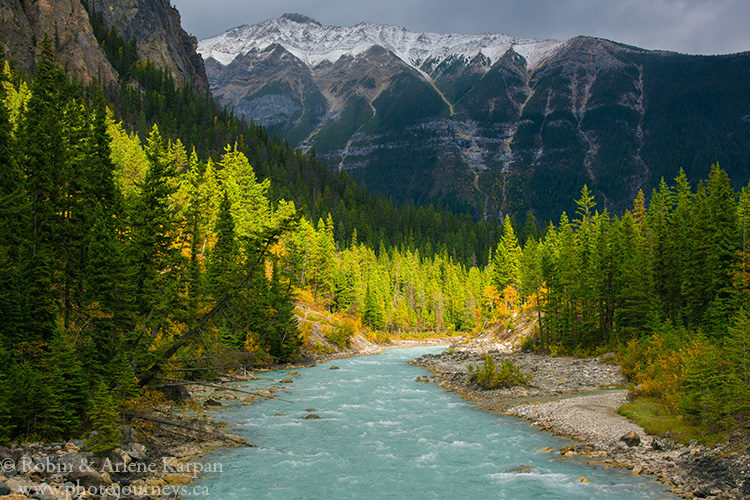 Partway up the road, a viewpoint looks over the famous spiral tunnels where, in the early 1900s, the railway was not only cut into the solid rock of the mountain, but formed into a spiral to solve the problem of building a gradual grade on the valley’s steep slopes. We were fortunate to see a long train negotiating the spiral, a rather disconcerting sight at first glance. It looked as if one train was heading east into the tunnel, while another was heading west out of another tunnel 15 metres higher. 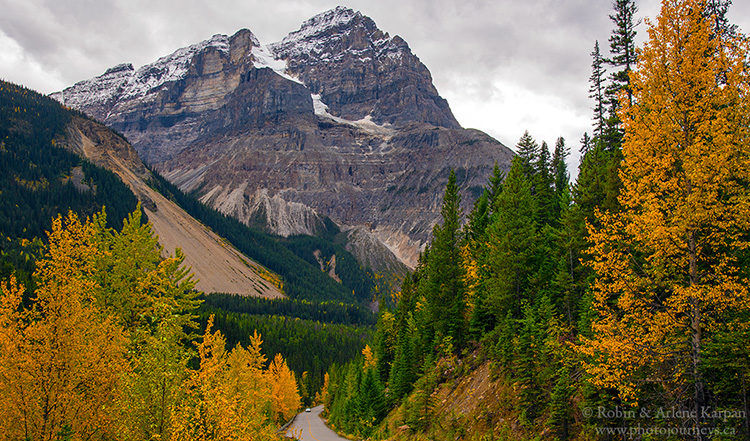 Another worthwhile stop is at the confluence of the Yoho and Kicking Horse Rivers. At the parking area, the rivers are obscured by trees. It’s not until you take the fairly steep path down to the water’s edge that you get unobstructed views. The jumble of massive boulders, with frothing whitewater coming from two directions makes this a wild spot with a lot of potential for photography. 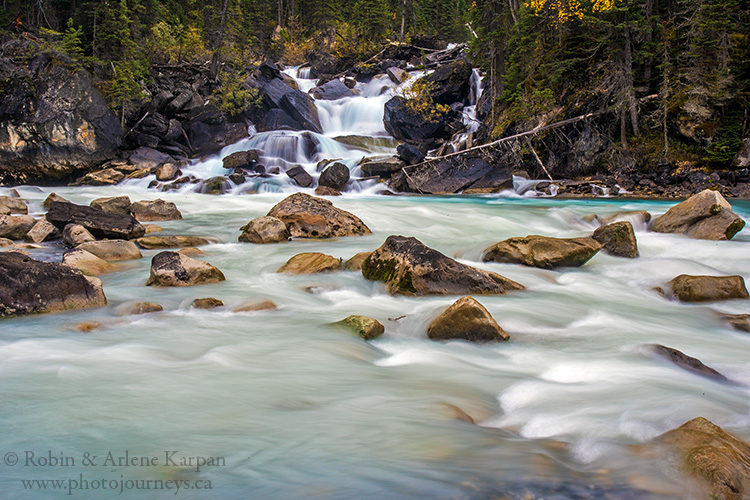 Confluence of the Yoho and Kicking Horse Rivers.

Everything seems to be steep in Yoho. The Yoho Valley Road has switchback turns that are so tight that large RVs and trailers aren’t allowed. We saw some longer vehicles backing up the hill just to negotiate the tight corners. 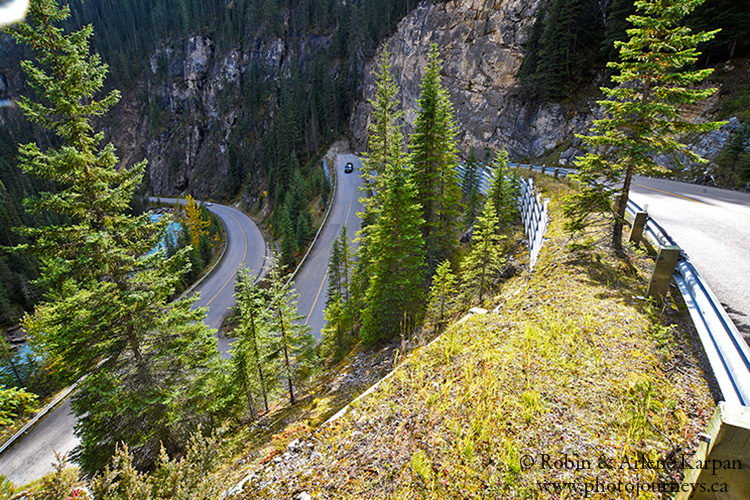 Switchbacks on the Yoho Valley Road. 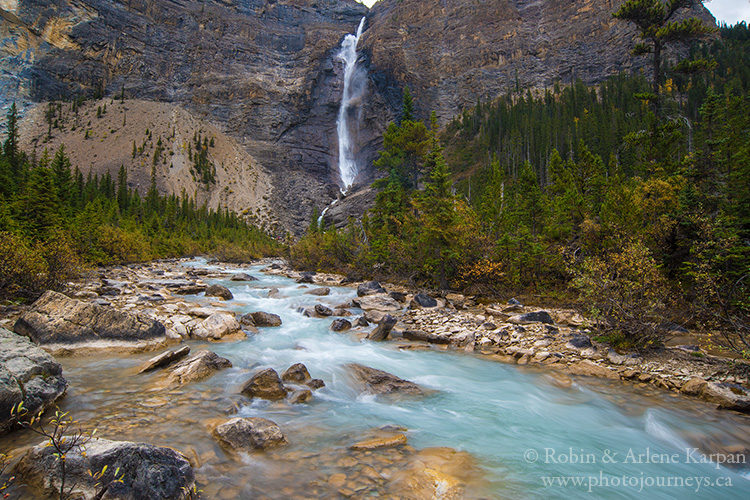 From the parking lot at the end of the paved road, it’s an easy 10-minute stroll to the falls. The most difficult part is choosing among the wealth of viewpoints to photograph them. Getting close to the base where you can stare up and feel the spray is one option, but we like it a bit farther back where it’s possible to include a short section of river in the shot as well. 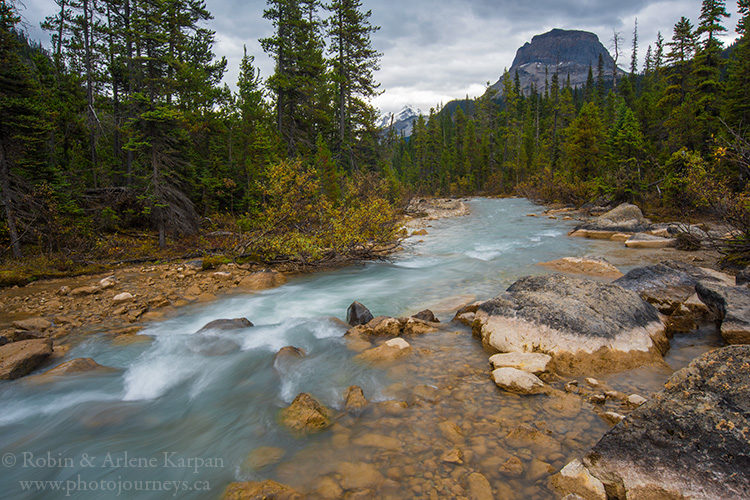 The views downstream from Takakkaw Falls aren’t so bad either.

Other great vantage points are even farther back before the pedestrian bridge that crosses the river on the way to the falls. Before crossing that bridge, take the short detour to the viewpoint with Parks Canada’s famous red chairs. This certainly ranks among the top red chair viewpoints anywhere in Canada. 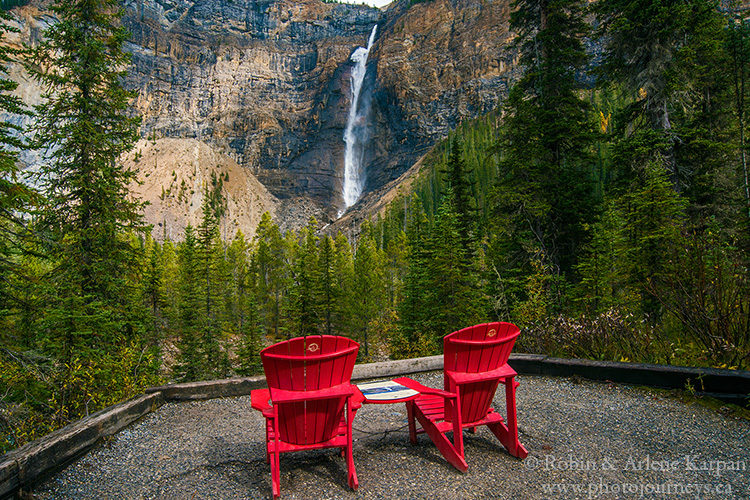 While Takakkaw Falls may be the end of the road, for avid hikers it’s just the beginning, with several breathtaking hikes to places such as Laughing Falls, Twin Falls, and points beyond.

The short drive to Emerald Lake is another must-do. At the first stop at Natural Bridge, the powerful swirling action of the Kicking Horse River has carved its way right through solid rock. This is an exceptionally scenic spot, not only for the rocky bridge itself, but the backdrop of snow-capped mountains, and the wild river both upstream and downstream. Since it’s also a popular tour bus stop, the short pedestrian bridge across the river – with the best views of bridge formation – is often chock-o-block with selfie-stick wielding crowds. For photography, try to hang around long enough to time your shots between the tour bus visits which tend to be fairly short. 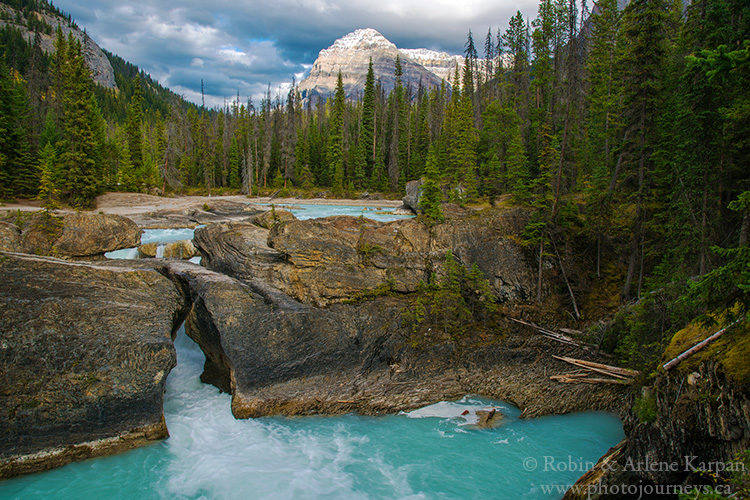 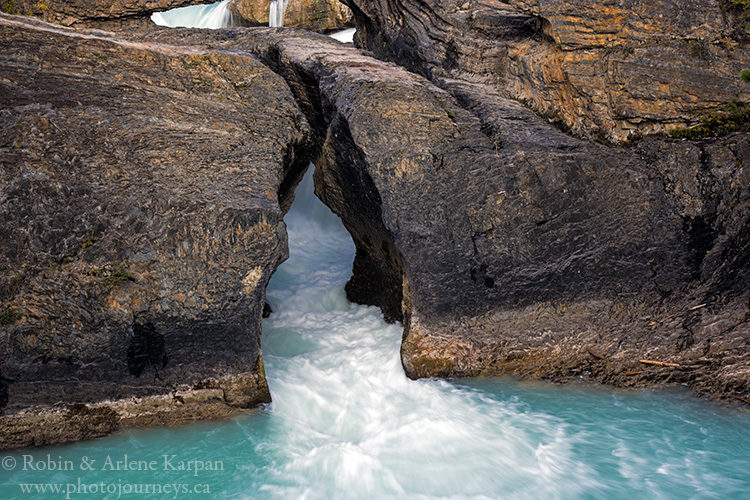 Outlet on the Natural Bridge formation.

We had a lot of cloudy weather during our most recent visit. While that makes it more challenging for photographing grand scenes, the even light with low contrast made it ideal for close-ups of moving water. A spot we especially like is the section of river just above the gorge at the Natural Bridge. We spent a lot of time playing around with long exposures here, sometimes using neutral density filters to get exposures of 15 sec. or more. 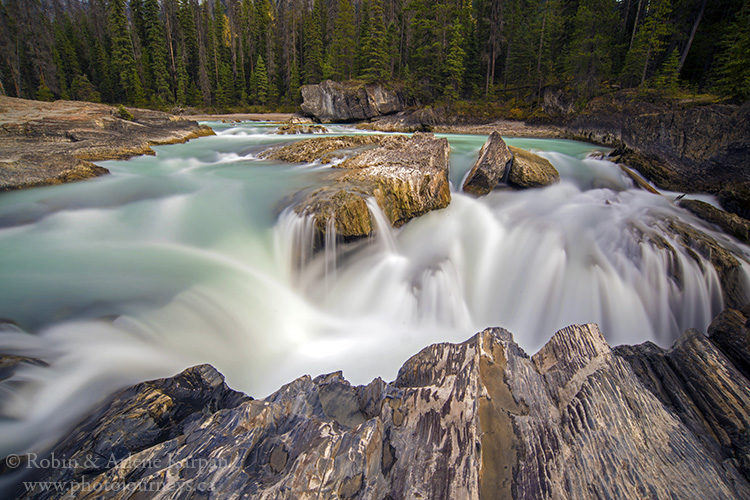 Kicking Horse River where it drops into the Natural Bridge gorge. 15 sec. exposure at f/22, ISO 64. 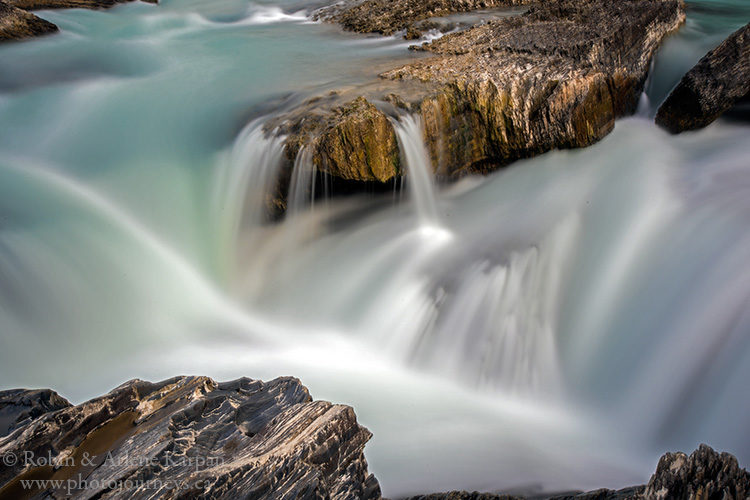 Closeup of the above scene.

The Natural Bridge parking area is also the trailhead for various hikes. If you want a short walk, the route to the Emerald River is not only scenic but also very easy. 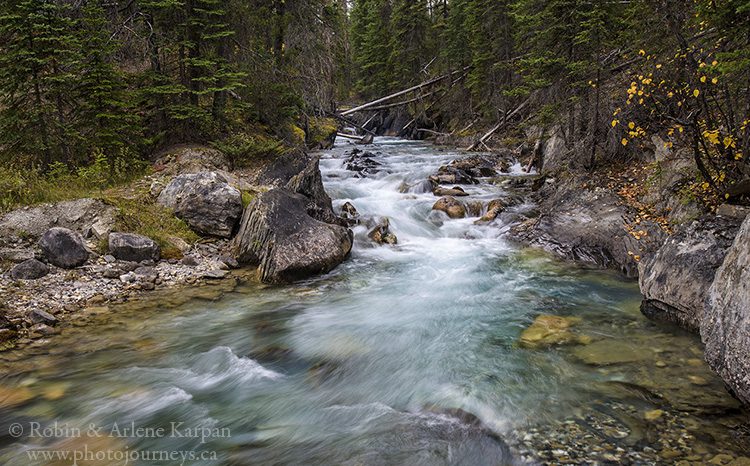 Hike along the Emerald River.

Picturesque Emerald Lake, surrounded by magnificent peaks, is one of the park’s most visited spots. What makes the setting really stand out is the almost unreal colour of the water, a vivid greenish-turquoise blue. The parking lot next to the historic Emerald Lake Lodge is the trailhead for several short and long hikes. One walk that shouldn’t be missed is the easy five-kilometre stroll around the edge of the lake. It’s amazing how the shades of colour in the water change depending on the time of day, the direction you face, and light conditions.

The dazzling waters of Emerald Lake. 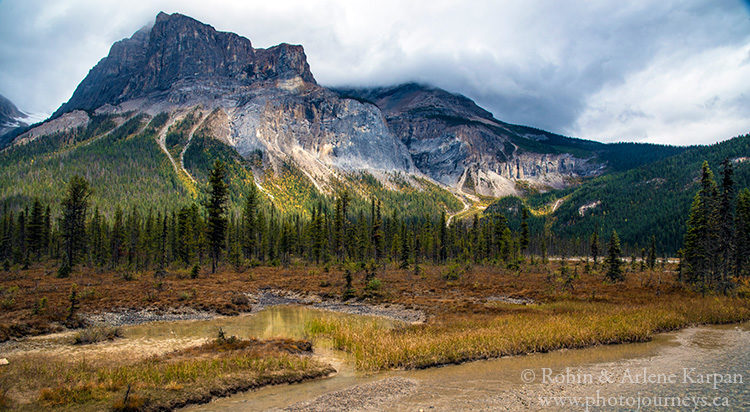 Mountains along the circle trail around Emerald Lake.

Colourful ground cover on the walk around Emerald Lake.

An excellent short hike (5 km return) is the trail to Wapta Falls near the western end of the park to see the largest falls on the Kicking Horse River. The walk through thick forest eventually comes to a vantage point on a high bank where you look over the massive wall of water 30 metres high and 150 metres wide. Optional paths lead down the slopes for a head-on view of the falls and the river. 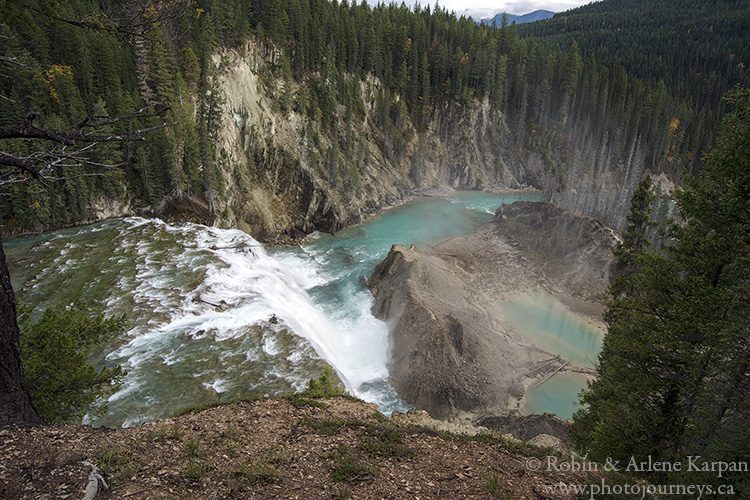 Wapta Falls, along the trail to the bottom of the falls.

Another bonus is that the drive along the Trans Canada Highway towards the Wapta Falls trailhead passes through even more awesome scenery, including pull-offs to trailheads for the Ottertail Trail and Hoodoo Creek Trail, and pleasant picnic sites at Finn Creek and Faeder Lake.

For details, see the Parks Canada website. For a more comprehensive look at the many other attractions of the region, see the Kootenay Rockies. 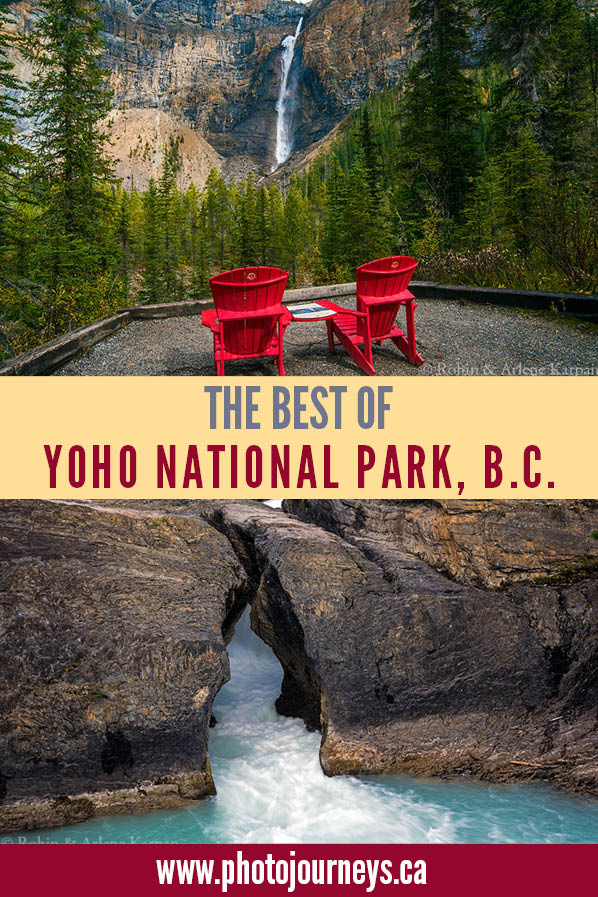