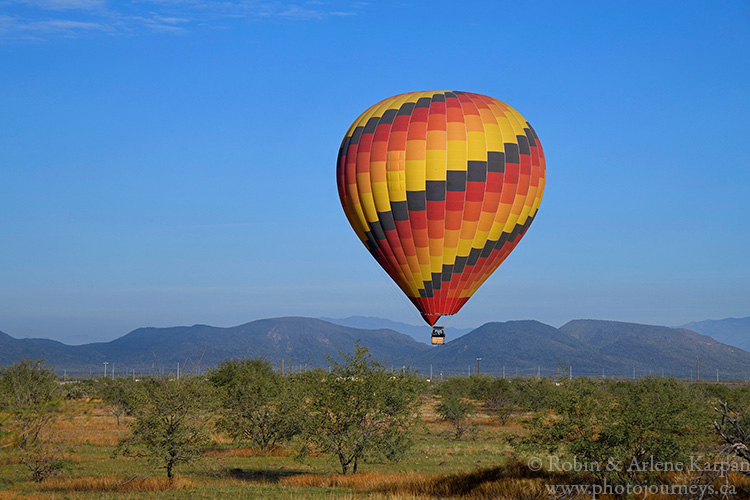 Phoenix, Arizona is a hot air ballooning hotspot for good reason. In many places, scheduling a hot air balloon ride can be tricky, since weather conditions have to be just right. But with over 300 days of sunshine per year and relatively stable air, Phoenix has more fly-able days per year than anywhere in the country. 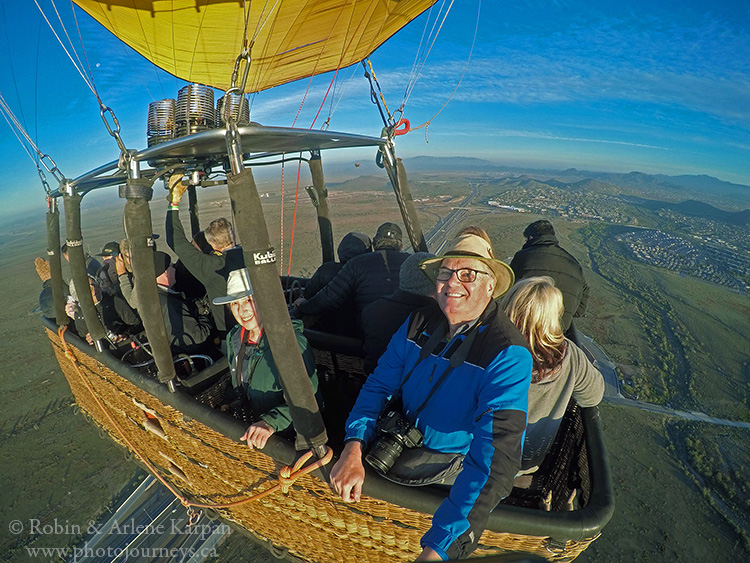 Floating high above the desert near Phoenix

On the morning of our flight, we’re picked up well before dawn at our hotel and driven to the lift-off site for Hot Air Expeditions on the outskirts of Phoenix. As we arrive in the pre-dawn light, they are already starting to unroll the massive balloon.

Arriving at the launch site. 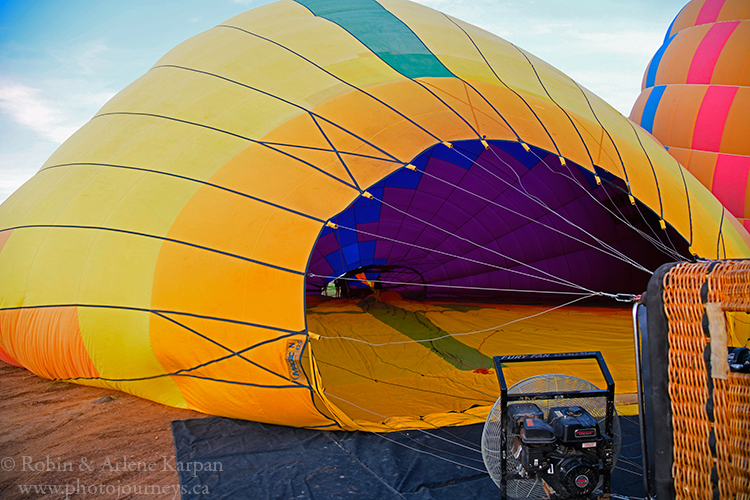 Starting to inflate the balloon with powerful fans.

The next step is to use huge fans to fill it with air. We walk around to the opposite side of the balloon (the top) and gaze inside as the gigantic bulb begins to inflate and ground crew go inside to sort out lines and other components. 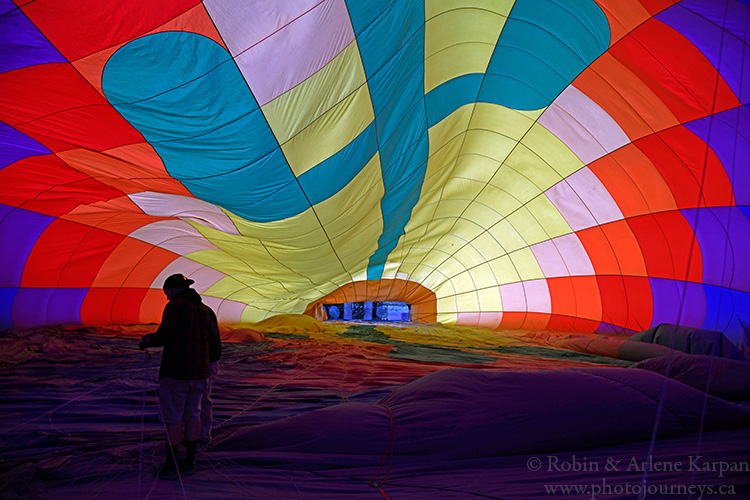 Looking inside the balloon during inflation.

Once it is partially inflated, the propane burners are turned on and the balloon soon takes on its familiar shape. Gradually, it starts to rise off the ground and become upright, as the pilot carefully adjusts the angle of the flame. 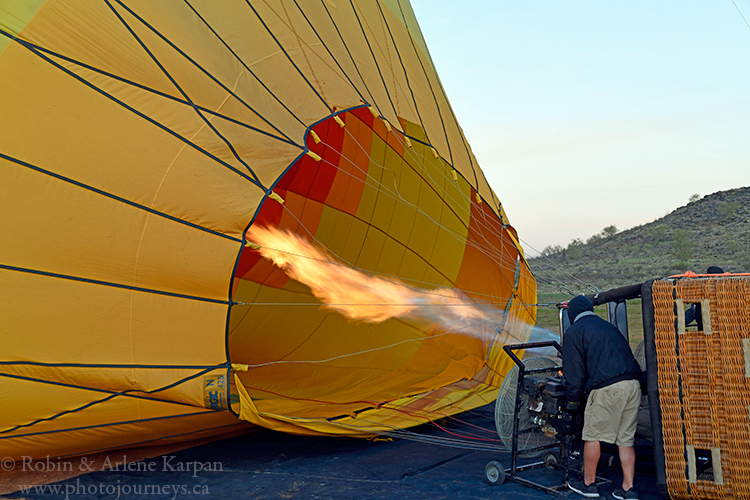 Turning on the burners.

Once the pilot checks that everything is ready, everyone jumps into the over-sized wicker basket. Balloons come in a variety of sizes, with ours being one of the bigger ones – the basket had room for 14 of us in 4 compartments, plus a central compartment for the pilot. Passengers pass cameras around to the ground crew for quick pre-flight shots. 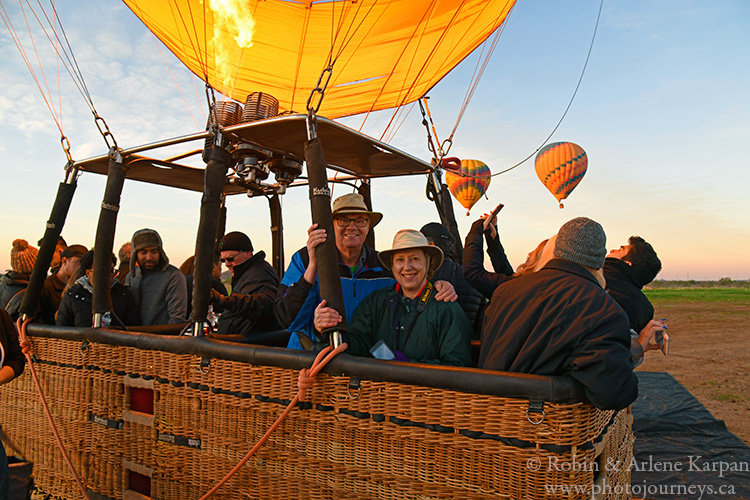 The ground crew unties the ropes, then it’s up, up and away as we rise almost straight up, just as the rising sun clears the nearby mountains. It feels as if we aren’t moving at all, yet we’re climbing higher and higher above the ground. 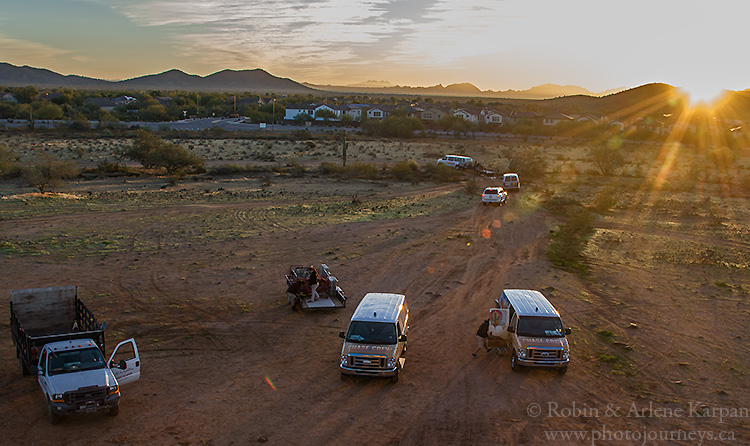 Up, up and away as we begin our flight.

Flying in a balloon is unlike any other type of flying – it’s a sensation of effortless floating. Since we travel at the same speed as the light wind, about 5-6 miles per hour on our flight, there is no feeling of movement. Other than the occasional blast from the burners, there is no sound either. 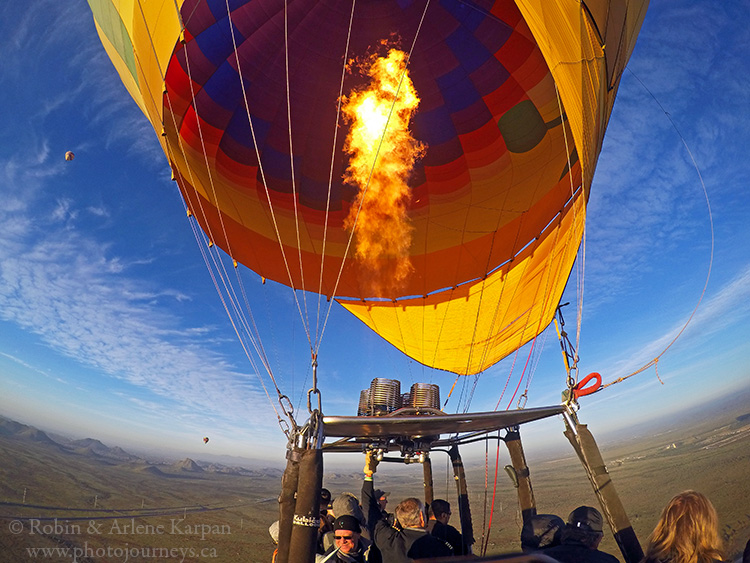 High above the desert.

We gradually glide away from the edge of the city, over the highway, and towards open desert. Our pilot Gary adjusts the altitude by turning on the burners to go higher or just letting the balloon gradually descend in silence. We’re treated to a 360-degree view that takes in the city suburbs, distant mountains, and balloons dotting the sky. 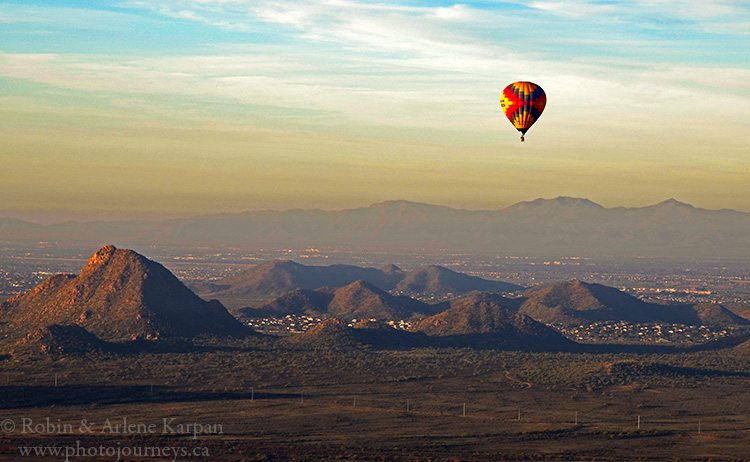 A balloon soon after take off. 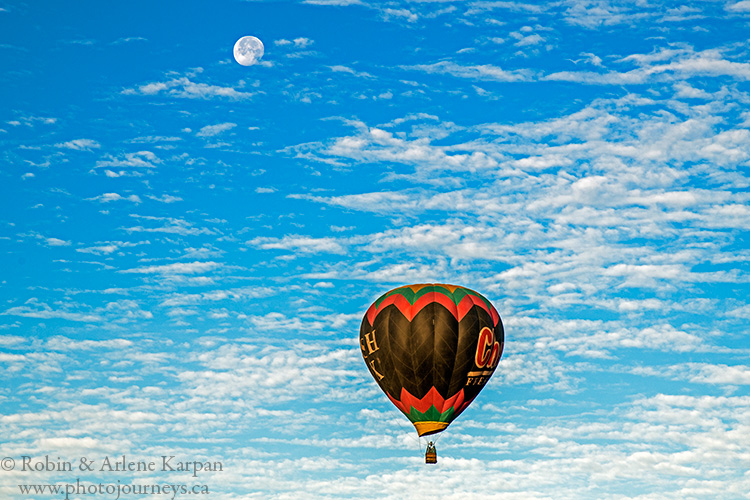 Balloon against the full moon in early morning.

Near the end of the one-hour or so flight, Gary has a good idea where we will end up, so he radios the location to the ground crew. He manipulates some of the support strings to let the hot air escape and descend more quickly. As we get lower, Gary eyes a clearing with few rocks and bushes and aims for it. We skim the tops of some low bushes then gently bounce down as the ground crew grabs onto the basket to slow it to a stop. 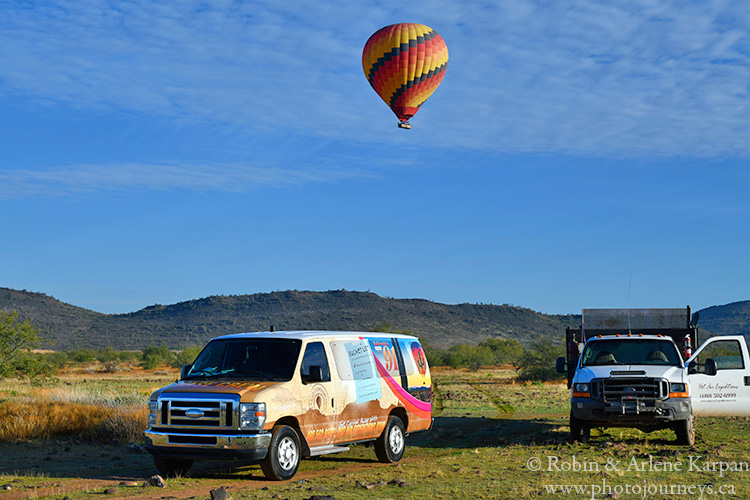 Ground crew vehicles and another balloon coming in for a landing nearby.

Then it’s time to celebrate. A long-held tradition is to have a champagne toast after a balloon ride. The practice had its origins with the first balloon flights in the 1780s in France. Farmers objected to these strange contraptions dropping from the sky and landing in their fields, and some even attacked the balloons with pitchforks. So balloonists would carry champagne as a peace offering to farmers, and this seemed to smooth things over. Here, however, we not only toast the trip with a glass or two of bubbly, but have a full breakfast served on tables set up in the midst of the Sonoran Desert. 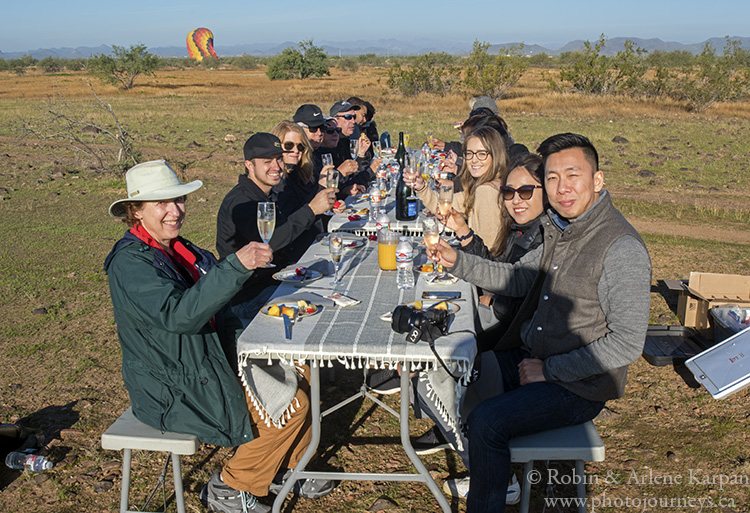 Champagne toast and breakfast in the desert at the landing site. 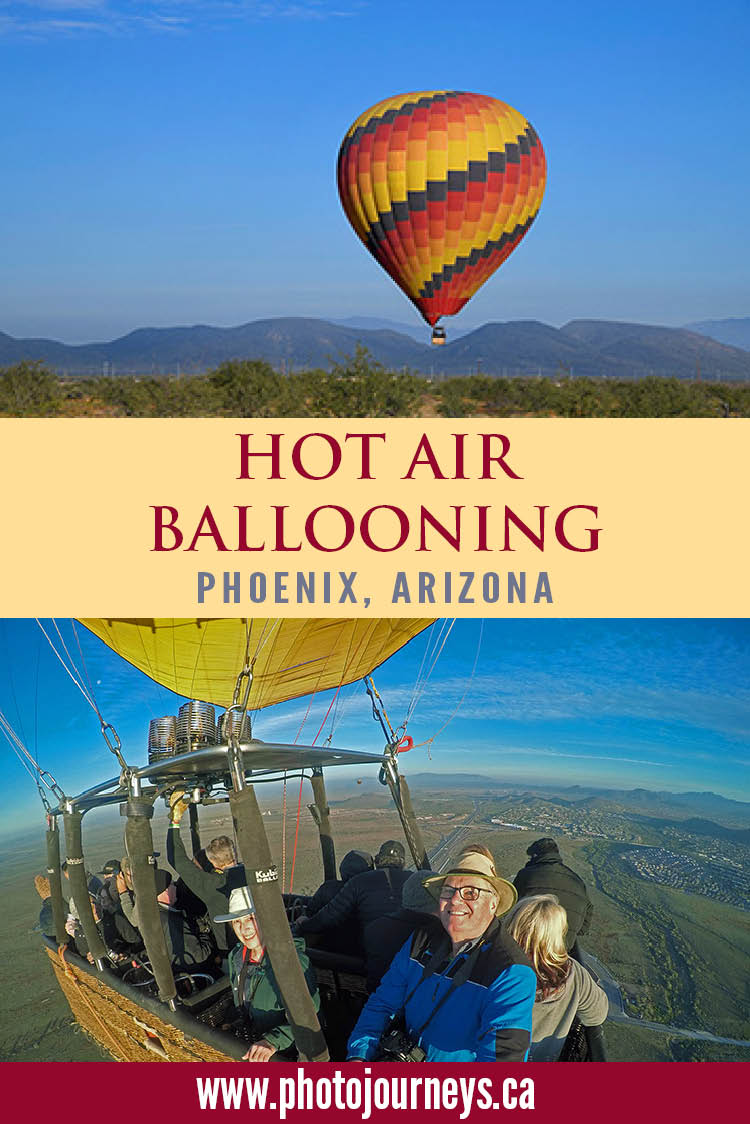