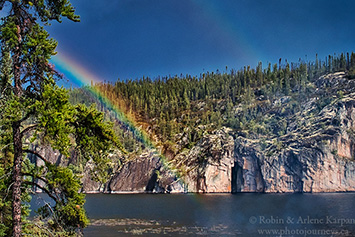 This posting is intended to help you plan your future travels. We don’t recommend travelling until Covid-19 travel restrictions are lifted.

In the last posting, we looked at 10 Easy to Reach Saskatchewan Scenic Viewpoints. This time we kick things up a notch by looking at 10 amazing places that aren’t so straightforward to get to. A couple of these are not difficult to reach, requiring only a relatively short walk. Most others take more effort, sometimes a lot of effort. What they have in common is that they are off the beaten path and many people are not aware that some of these places even exist.

Eye Cave of the Porcupine River

Starting near the Northwest Territories border and flowing south to the Fond du Lac River, the Porcupine is a wild and remote river boasting one stunning scene after another. It’s considered one of the more challenging canoe routes in the province. The most unusual feature is the Eye-Cave where a cliff face lining the water has a fissure in the rock, creating a cave large enough to paddle a couple of canoes inside. Looking up, you see a small opening in the cave ceiling – it’s as if a giant eye is peering down at you.

Almost directly south of Uranium City, Lodge Bay is home to Beaverlodge Mountain, the highest point on the Lake Athabasca’s rugged north shore, and Beaverlodge Island in the middle of the bay. Hidden away at the extreme western end of the bay, and only accessible by boat, the pinnacle was formed eons ago when most of a cliff face collapsed, leaving only a narrow, chimney-like formation standing. It’s possible to scramble up the rubble of massive boulders to the top for a spectacular view over the lake.

Massive vertical cliffs rise from the deep water of Lake Athabasca’s north shore. But what makes these cliffs special is the kaleidoscope of multi-coloured seams in the rocks and lichen growing on the surface. The cliffs face west, with the golden hour light just before sunset making them even more vibrant. The only way to see the cliffs is from a boat, so hope for calm conditions.

Stretching most of the way across Saskatchewan, the Churchill River is filled with amazing places. But Wapumon Gorge is in a class by itself. In eastern Saskatchewan, the Churchill really picks up steam from the many rivers running into it, one of the biggest being the Reindeer River. For much of its length, the Churchill spreads into a series of lakes connected by rapids and waterfalls, sometimes divided into multiple channels. Here, however, the entire powerful river constricts into a narrow gorge and surges through with a deep roar.

Relatively few people make it here, since there are no roads anywhere near. The only practical way to visit is on a canoe trip, though this wild section of the river requires solid whitewater paddling skills. On the trail around the gorge, you can hike up to the high point overlooking the water for some spectacular views.

The Clearwater River is another of those marvellous northern waterways with non-stop scenic views. Our favourite spot is Skull Canyon where the river plunges between vertical cliffs as it divides into two channels around a flower-pot island. It’s a great place to explore, with the best view being the outlet of the canyon that we can see from a perfectly situated campsite. Facing east, we can watch and photograph the orange cliffs becoming increasingly saturated with the low evening sun. Mornings bring an entirely different show as backlighting throws shadows into the eyes of the skull for which the canyon is named.

The Athabasca Sand Dunes are the largest set of dunes in Canada and the largest this far north anywhere in the world. The highlight is the series of 40 or so giant dunes, a bit south of Lake Athabasca and about a two-hour hike west of the William River over pure sand. Some of these monsters are 30 metres high and a kilometre long, topped by knife-edge crests flowing in sinuous curves. For more details see our post Exploring Saskatchewan’s Athabasca Sand Dunes.

Patches of exhumed forest dot the Athabasca Sand Dunes along the south shore of Lake Athabasca. These are trees that were once buried by sand, perhaps hundreds of years ago. As the dunes advance east with the prevailing westerly winds, they become uncovered, or exhumed, leaving desiccated tree remnants that almost look as if they are petrified.

The Fond du Lac River flows west between Wollaston Lake and Black Lake, for most of its length flowing through sandstone country. Unlike the hard rock of Precambrian Shield that dominates much of northern Saskatchewan, sandstone is easily eroded. Here Mother Nature has carved caves, flower-pot islands, twisting and turning waterfalls, and formations that seem like whimsical works of art.

Saskatchewan has some of Canada’s baddest badlands, including well-known spots such as the Big Muddy Badlands and the Killdeer Badlands of Grasslands National Park. The Avonlea Badlands are much less known since they are on private land. The only way to see them is by taking guided tours operated by the Avonlea Heritage Museum.

These badlands take you by surprise. You begin by walking across a perfectly ordinary-looking pasture. Then all of a sudden the land drops away and you gaze below at an enchanting land of stone-capped hoodoos, buttes, strange pillar formations, and eroded cliffs looking like dripping chocolate. For more details, see our post Where to Find Saskatchewan’s Baddest Badlands.

Head to the West Block of Cypress Hills Interprovincial Park and signs direct you to the Conglomerate Cliffs, where small rocks have been cemented together through a natural process. While this is a gorgeous spot, there is another set of conglomerate cliffs that are just as impressive, possibly more so, but these aren’t well-signed and don’t have road access. The Hidden Conglomerate Cliffs are so named because as you drive along the main park road through Battle Creek Valley, they are hidden from view by trees on the valley slopes. You have to walk to get there, either along the Trans Canada Trail from the trailhead along Battle Creek Road, or from on top of the plateau. There is also access from the Historic Reesor Ranch. 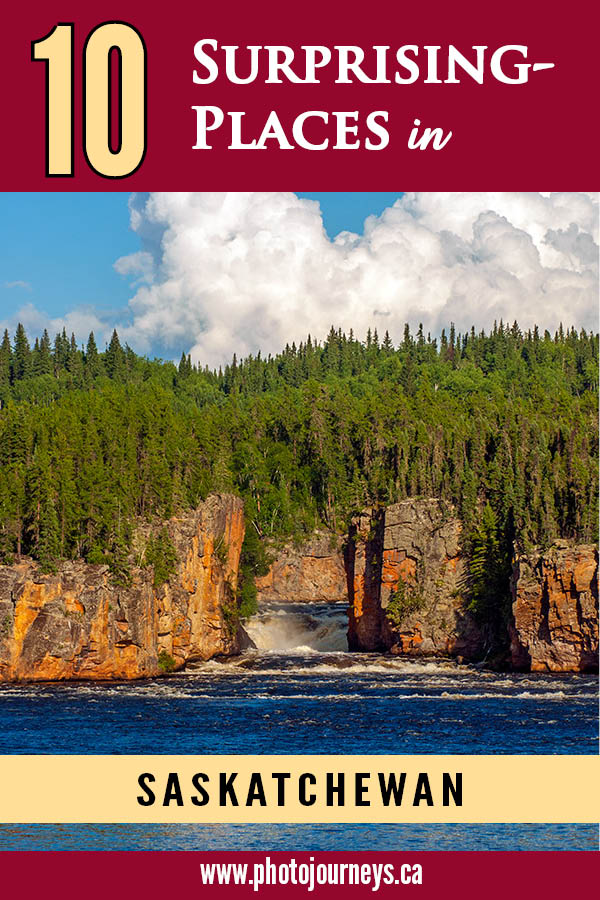 4 thoughts on “10 Amazing Saskatchewan Places that Might Surprise You”