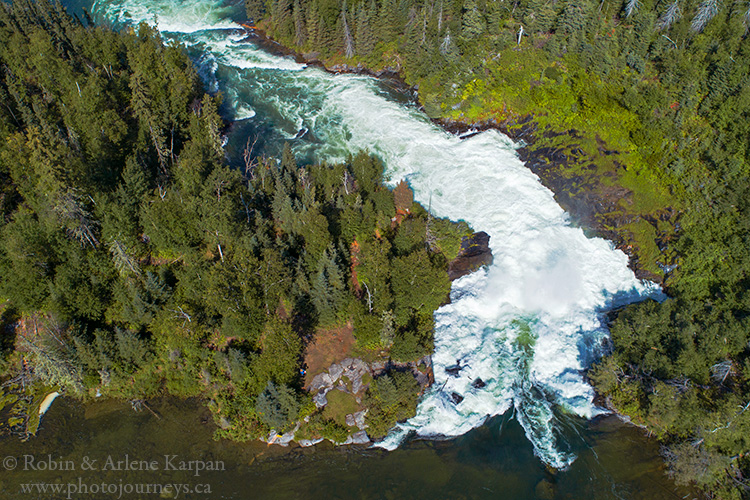 Nistowiak Falls is the most famous waterfall in Saskatchewan, both because of its beauty and its accessibility. Several wonderful waterfalls dot northern Saskatchewan (see our post Saskatchewan’s Most Magnificent Waterfalls), though many take a bit of effort to reach. Nistowiak, on the other hand, is less than 20 km from the end of the road at Stanley Mission, making it enjoyable and fairly easy to reach by canoe down the legendary Churchill River. Most of the route, as well as the falls, is part of massive Lac La Ronge Provincial Park. If you’re not prepared to travel on your own, another option is to arrange a trip with a local outfitter or tour operator (contact Tourism Saskatchewan for options).

The community of Stanley Mission sits on the banks of the Churchill River about 80 km north of La Ronge. If you’re planning an overnight or longer trip, stop at the Northern Store in town to arrange for safekeeping of your vehicle. 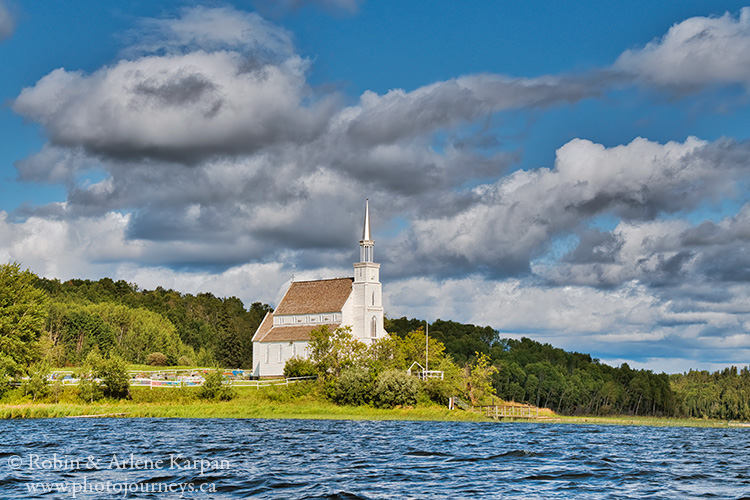 A nice part of this trip is that there are a couple of other great places to see before you even get to the falls, along with superb scenery along the way. The first is immediately across the river from the boat dock in Stanley Mission. The beautiful Holy Trinity Anglican Church stands impressively on a point jutting into the Churchill River. The Victorian era Gothic Revival church was built between 1854 and 1860 during the fur trade, and is the oldest building still standing anywhere in Saskatchewan. It’s a reminder that in Saskatchewan’s early years, the focus was on the north rather than the south. 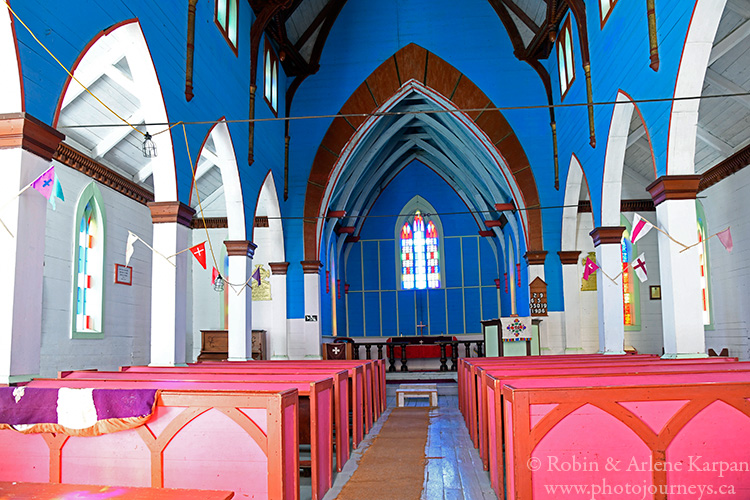 A little less than halfway along the route lies Stanley Rapids and Little Stanley Rapids, with a short portage trail around the latter. As the river narrows approaching the rapids, watch for a cliff face on the north side. Just above the water is an impressive set of ancient pictographs – one of the most easily accessible major rock painting sites in the north. The paintings depict a thunderbird, bison, a caribou-like figure, human figures, and various other designs. 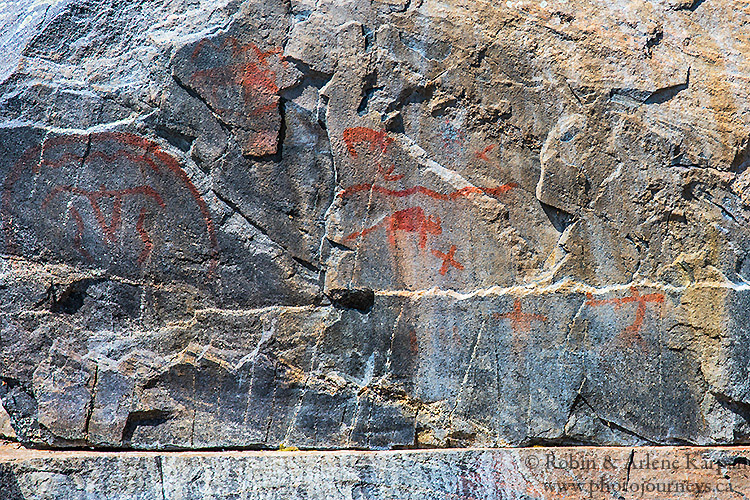 Some of the pictographs at Stanley Rapids. 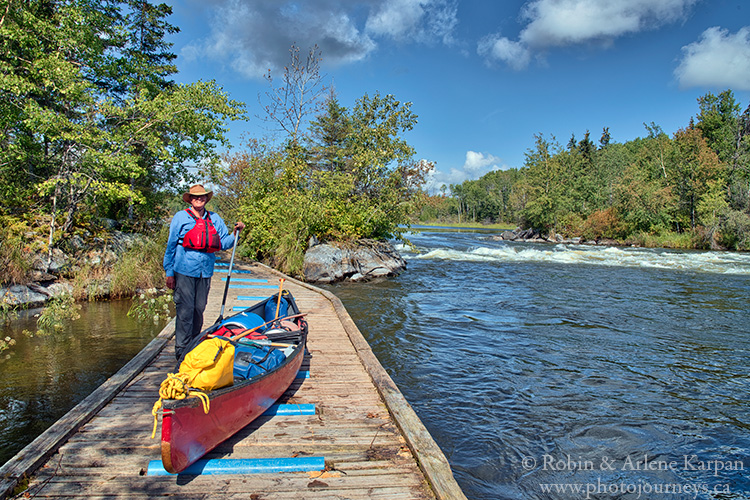 There’s a great place to camp on the downstream side of the portage, and another on the island in Drope Lake just south of the portage. While Drope Lake isn’t large, it’s big enough that winds could be an issue if coming from the wrong direction. 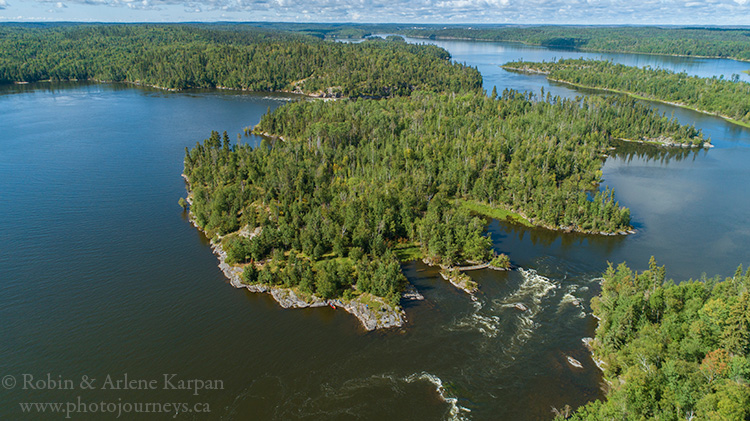 Shortly after leaving Drope Lake, the river narrows and makes a fairly sharp C-turn through Frog Narrows. The water is faster here, and when water levels are high, the flow could be powerful enough to make it a bit of a struggle to paddle upstream on the return trip. Immediately after Frog Narrows is a tiny island that has been used for camping for many years. It’s a nice little spot, but if you stay here you’ll have to get firewood from the mainland. 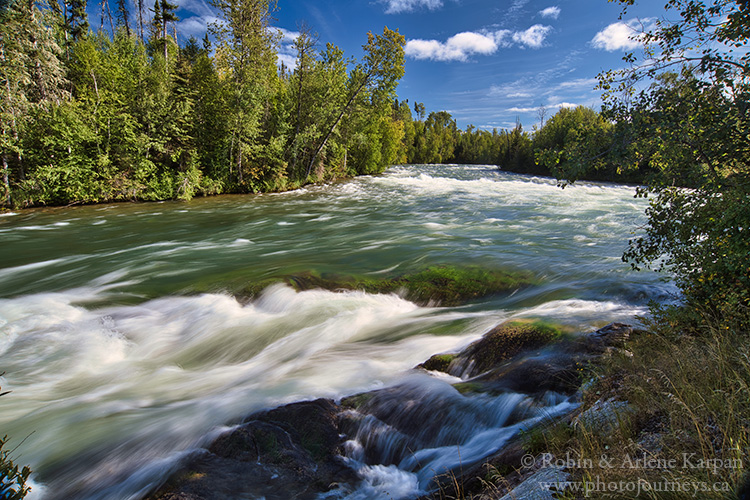 Outlet of the Rapid River near the beginning of the portage route. 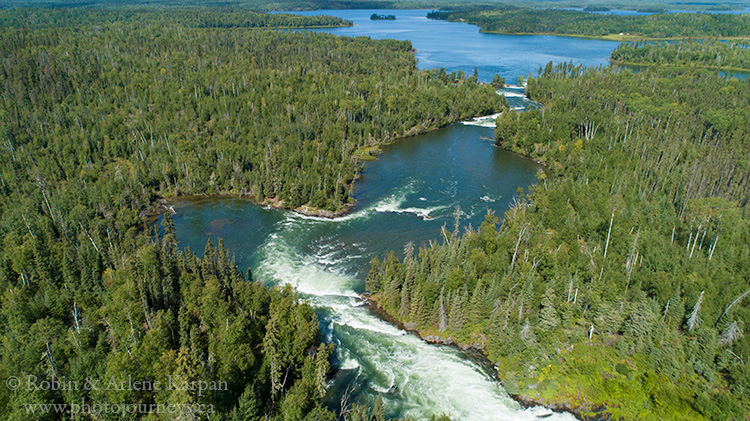 It’s an easy walk of about 1 km or so along the trail to the falls. A great vantage point is on the brink of the falls, and if water levels are not too high you can get out on the rocky outcroppings partway down to see the falls up close. Wide angle lenses are especially useful for photography. If light conditions are right, you can photograph the rainbow effect on the mist. As in most rainbow photography, a polarizing filter accentuates the colours. 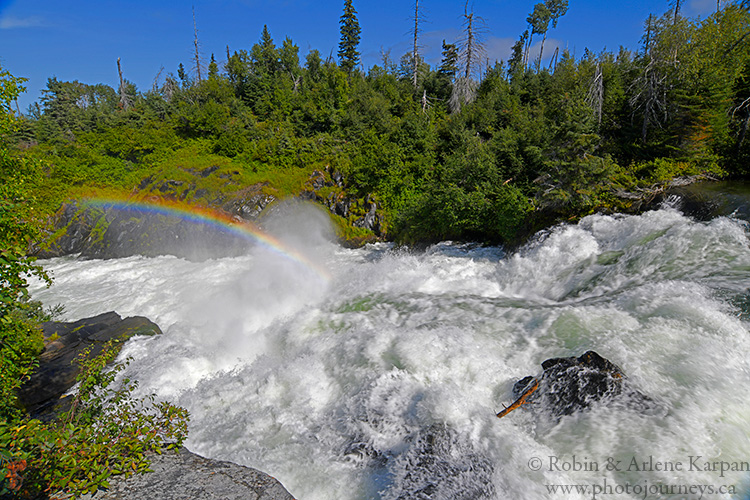 Near the brink of the falls during unusually high water flow. 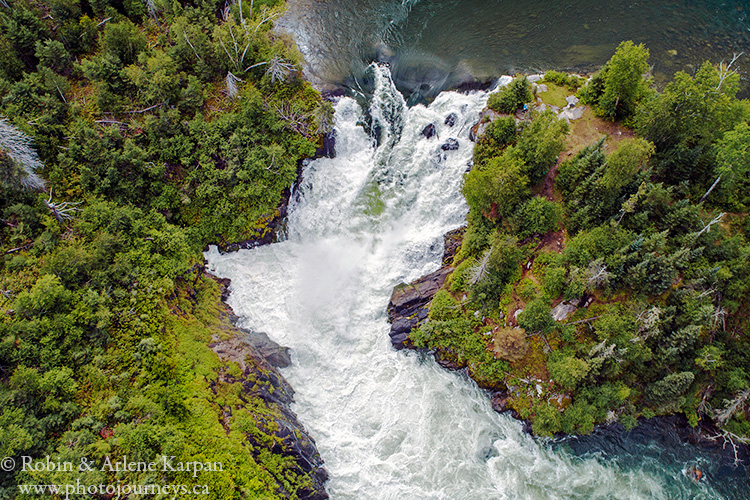 It’s not just the waterfall that is photogenic, but the entire canyon with its non-stop whitewater. When water levels are high, a great wall of mist rises from the base of the falls. The Rapid River is so powerful because it is draining massive Lac La Ronge into the Churchill River. 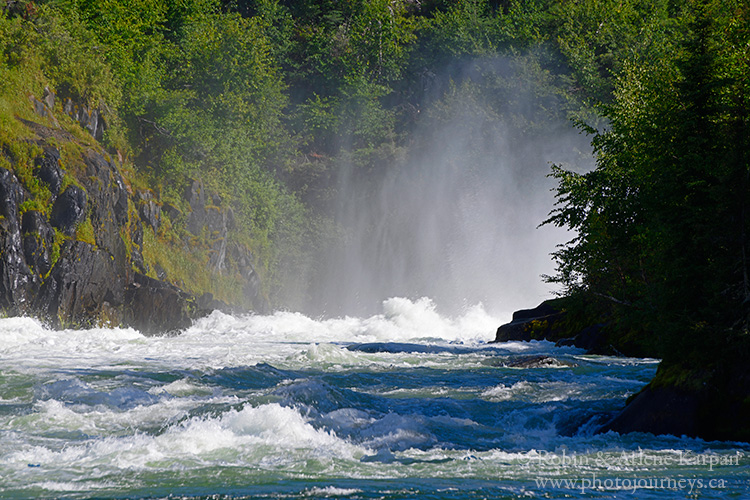 Mist rising from below Nistowiak Falls.

It’s also worthwhile walking upstream to the end of the portage to a set of rapids above the main falls. These have been dubbed Airplane Falls because of an incident in the 1960s when a float plane landed here to pick up forest firefighters. Before the pilot could start the engine, the current pulled the plane over the rapids. Fortunately, the plane became grounded on the shore just before going over the brink of the main falls.

If you decide to canoe this route, be sure to take detailed topo maps and be prepared for wilderness camping. The most useful map is the Churchill River – Otter Lake to Nistowiak Map available from Churchill River Canoe Outfitters in Missinipe. It’s not only a topographic map, but also has portage routes and suggested places to camp. 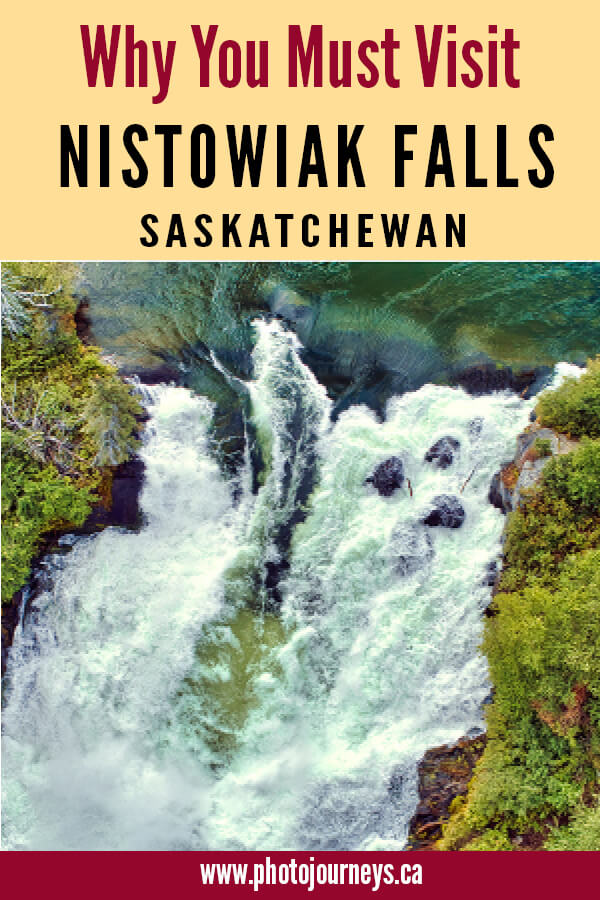