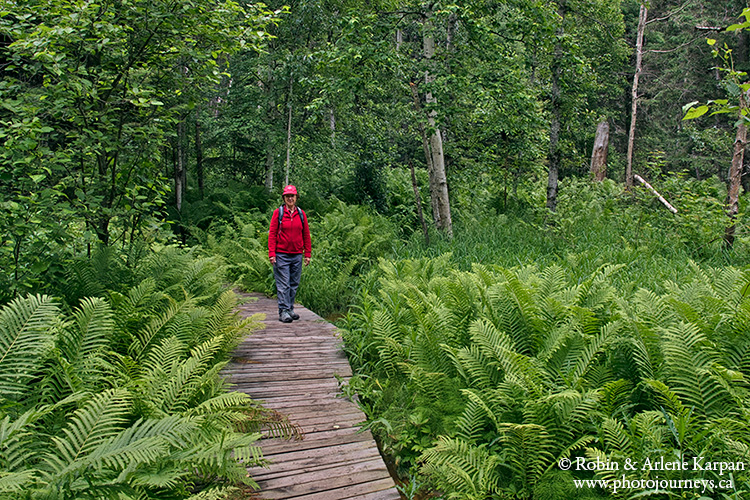 Prince Albert National Park is one of the top places to go hiking in Saskatchewan. Almost smack in the middle of the province, the park preserves the transition zone from the aspen parklands in the south to the northern boreal forest. Add the rich array of lakes, rivers, and wetlands, and we have an incredibly diverse wilderness to explore.

The trail system includes everything from remote and challenging backcountry treks to short nature trails. If you’re in the mood for some easy walks that still take you into some great scenery, check out these five options.

Among our favourite short hikes is the Mud Creek Trail. It’s especially attractive this summer with the high water levels making the creek look more like a river. Western Red Lilies, Saskatchewan’s provincial flower, are fairly common along roadsides throughout the park, but along this trail we saw many blooming in mid-July, making the most of the perfect growing conditions. 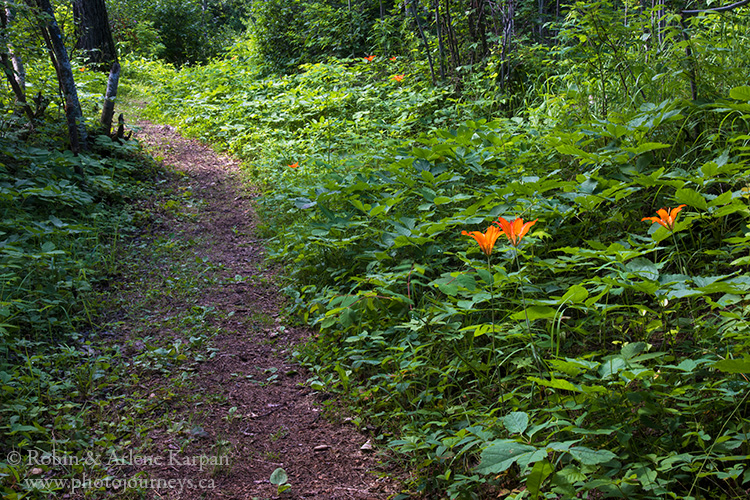 The 2 km walk starts at the South Bay Beach, a popular picnic spot along the Narrows Road. The first section follows the shoreline of Waskesiu Lake, part of it on a boardwalk next to a sphagnum spruce bog. 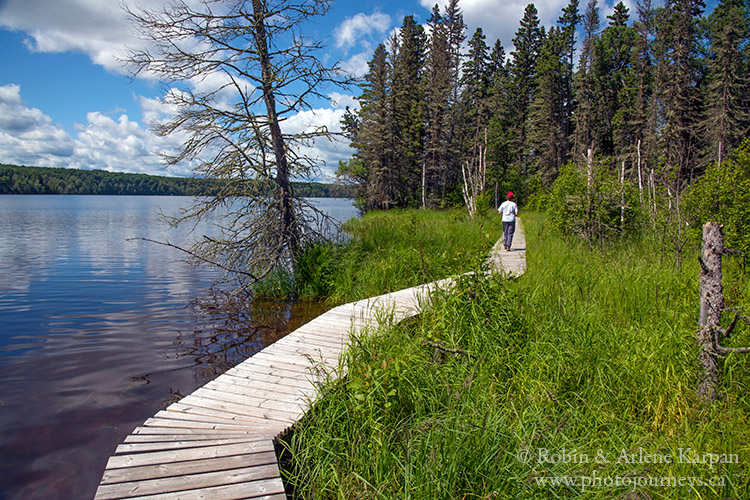 At the mouth of Mud Creek the trail turns inland and winds through spruce and aspen forest as it follows the meandering creek. You will see many trees typical of the park’s unique position as a transition zone, with species common to both the aspen parkland and the boreal forest.

Take a breather towards the end of the trail where a bench overlooks the peaceful and meandering creek. 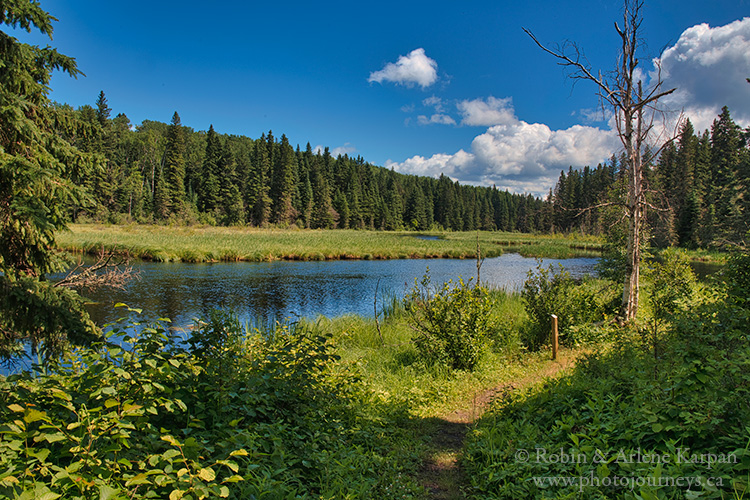 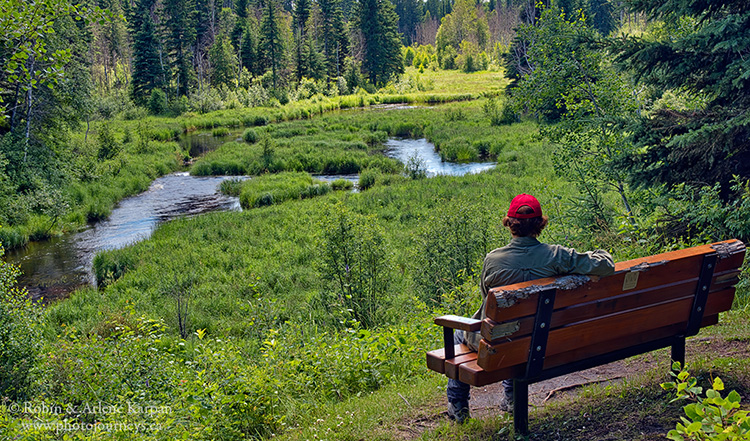 The Narrows Peninsula Trail is a 3 km loop around the small piece of land that juts out from the north shore of Waskesiu Lake. The varied terrain includes old-growth forest, prolific stands of ostrich ferns, scenic views along the lakeshore, and a stretch of beach. While quiet and peaceful today, back in the 1880s the peninsula was the site of a bustling trading post. 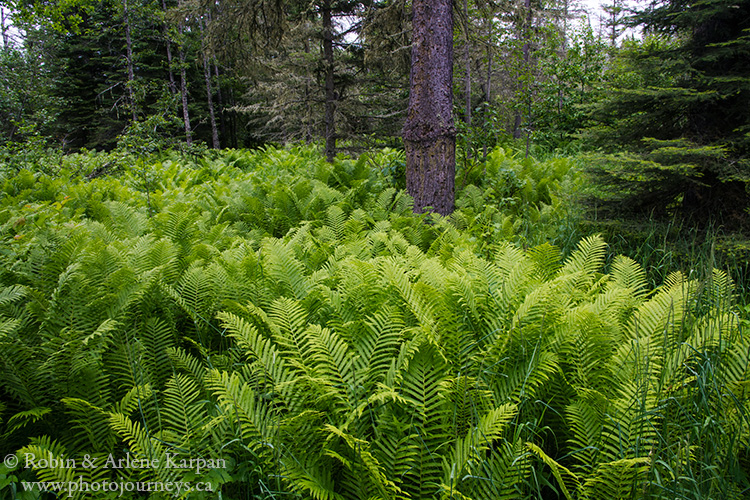 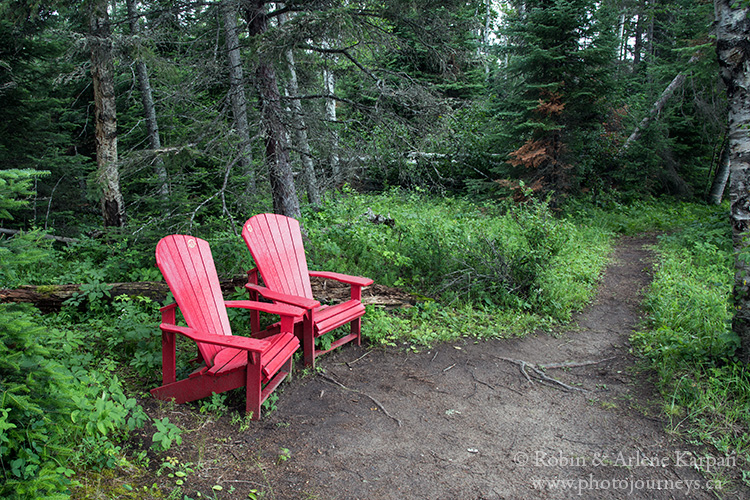 There’s a moderately steep section as the path winds down a slope near the trailhead on the Kingsmere Road but after that it’s mostly level with ups and downs over small ridges. Benches along the way, as well as a set of Parks Canada’s iconic red chairs, provide a chance to rest and look over the lake.

The day we did the trail we noticed a marked difference in the winds on each side of the peninsula. Cool north winds whipped up whitecaps on one side, while on the other side calm and peaceful waters along sections of beach tempted you to linger and maybe go for a swim.

The 1.2 km loop Treebeard Trail takes us past the oldest trees in the park along the gradual slope of an ancient beach ridge of Waskesiu Lake. The trailhead is near the end of the Narrows road. Trees have grown so large because the forest of balsam fir and older white spruce hasn’t seen a burn since 1823. Some spruce trees here are the largest trees in the park, although most of these giants have toppled over in recent years as their roots weakened with age. 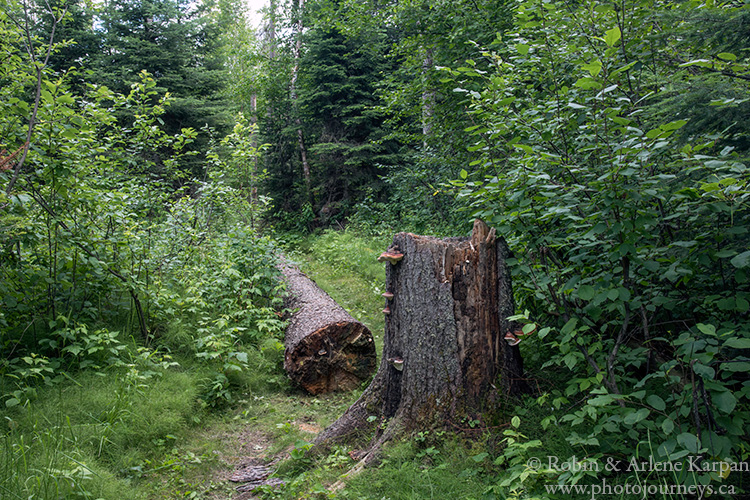 Another toppled giant along the Treebeard Trail. 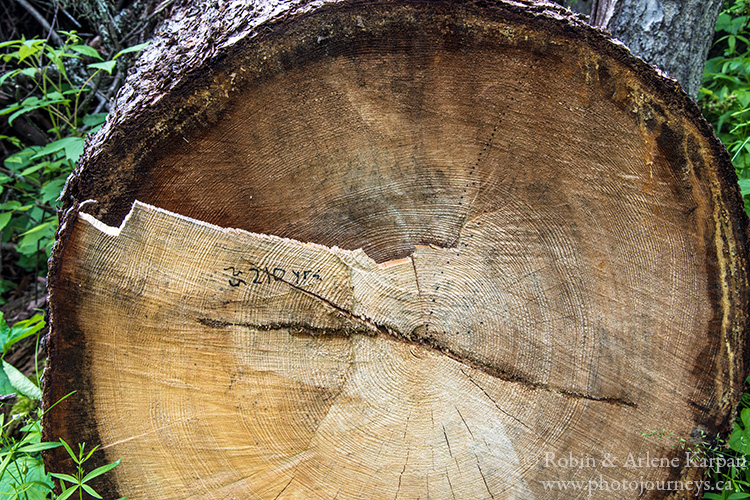 210 years is how long this tree survived before it toppled, according to the rings that someone counted. Treebeard Trail, Prince Albert National Park.

A theme of the trail is the cycle of life, as old trees fall and decay they provide nutrients to the forest floor and give life to other plants. This richness is evident in mosses, lichens, mushrooms and other plants, and gives photographers plenty of possibilities to capture close-ups of the abundant life on the forest floor. Because this is an old-growth forest, it attracts a lot of birdlife as well – watch for pileated woodpeckers, yellow-bellied sapsuckers, or brown creepers. 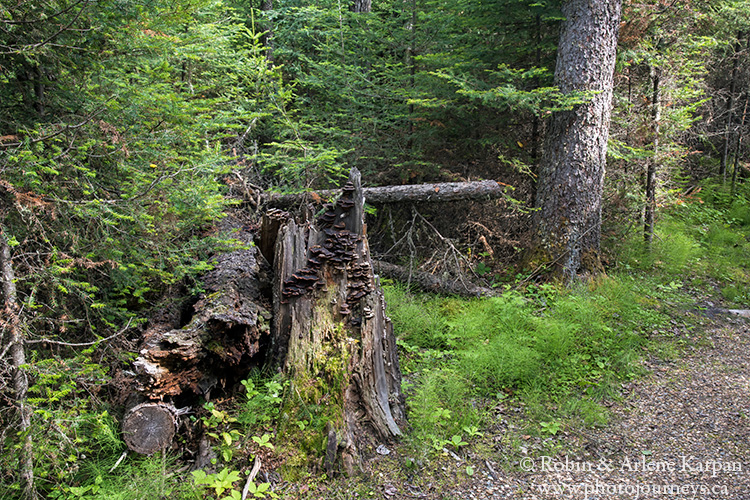 The Waskesiu River Trail is another that tops our hiking list. It certainly has the most attractive trailhead, next to a small set of rapids on the river practically beside the parking lot on Kingsmere Road. If you like photography, this is a great spot to spend some time before starting the walk. There’s good views downstream from the pedestrian bridge, and right next to the rapids.

The 2.5 km loop trail consists of two parts. The first .5 km is entirely on level boardwalk beside the river, then near the end it crosses the river. Several stops along the way feature interpretive panels describing the river and its ecosystem. Those with mobility issues or families with strollers who just want a short, leisurely walk sometimes turn around here and backtrack to the trailhead.

The remaining 2 km is slightly more rugged, though by no means difficult, as it winds up and down through the mixed woods forest. 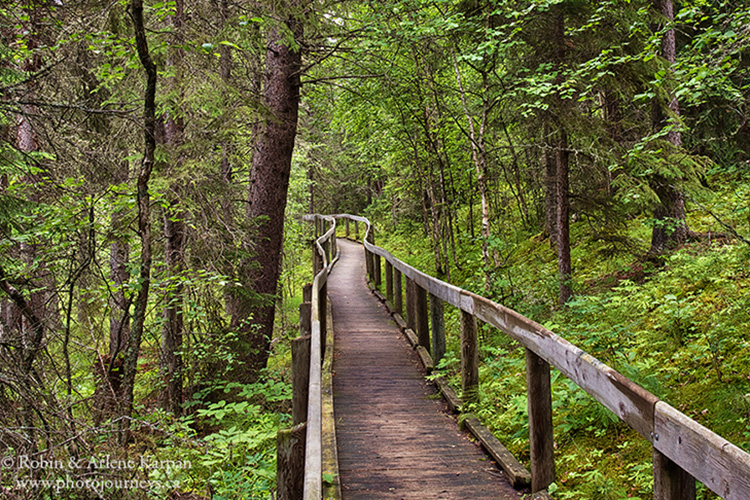 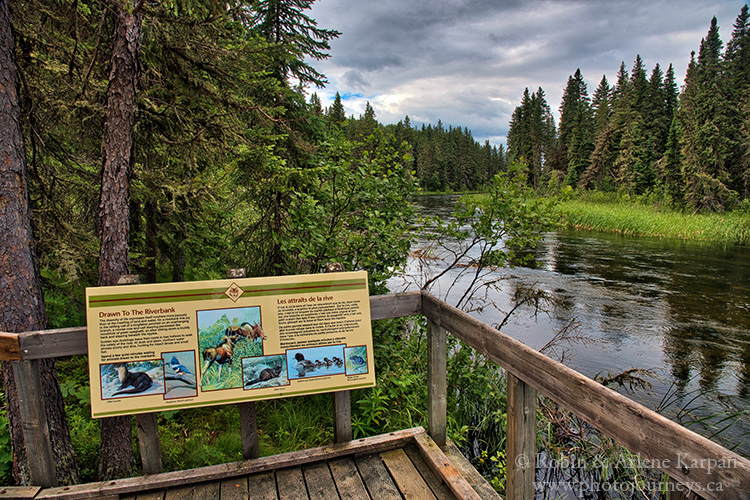 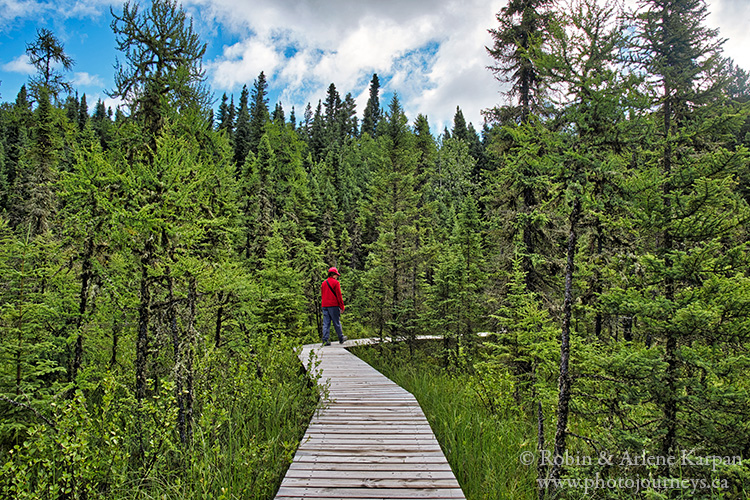 Boundary Bog Trail is in a class by itself. The trailhead is just inside the park gate at the north entrance. The 2 km loop starts through mixed woods of black spruce, white spruce, and stands of aspen. Soon the environment becomes wetter as you walk along the non-stop boardwalk that leads into the bog. 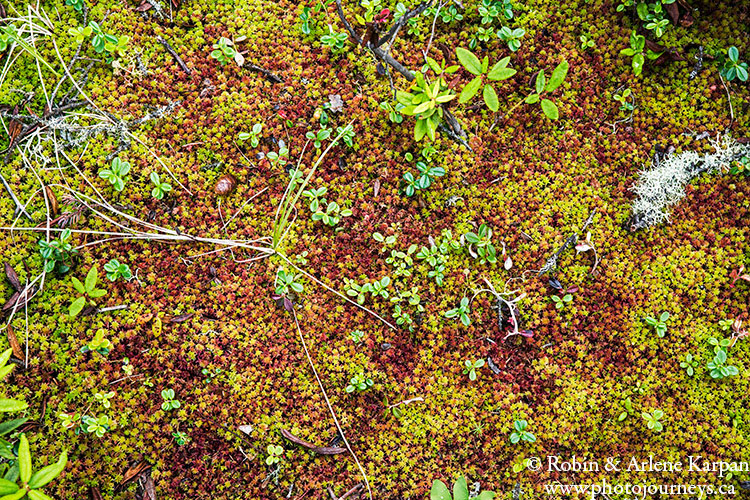 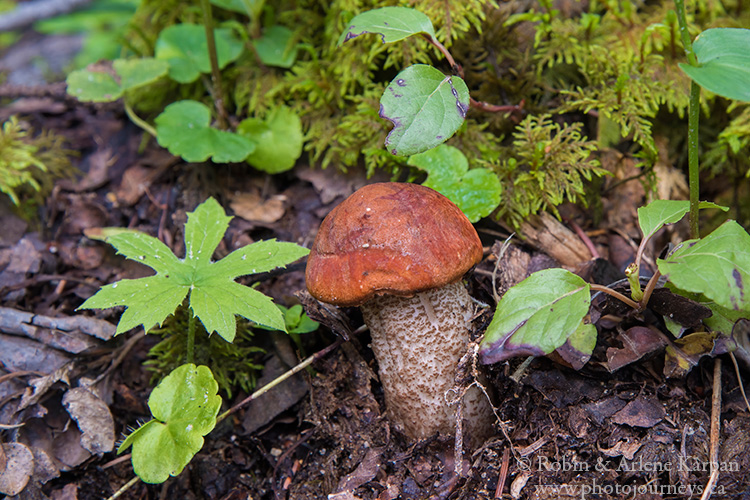 The boardwalk makes it possible to explore a special landscape that we could not otherwise appreciate without getting extremely wet or harming the vegetation. The black spruce fen is a world of carnivorous plants, dwarf birch, and tamarack. In mid-summer, we can usually find pitcher plants beside the trail, with a tall red flower that attracts insects, and cup-shaped basal leaves that capture unsuspecting prey which the plant then devours.

The variety of unique plant life including sundews, mosses, and feathery horsetail grasses makes this another top spot for photographing the life on the forest floor, both in the bog and on drier ground. The turn-around part of the loop is the “eye of the bog”, a small open water lake in the midst of the boggy environment.

Summer and fall in the bog look completely different. Summer can be intensely green while fall brings more shades of gold than practically anywhere else in the park. Much of this is due to the tamarack trees that dominate this wet terrain, their needles changing to a deep golden colour in the fall. 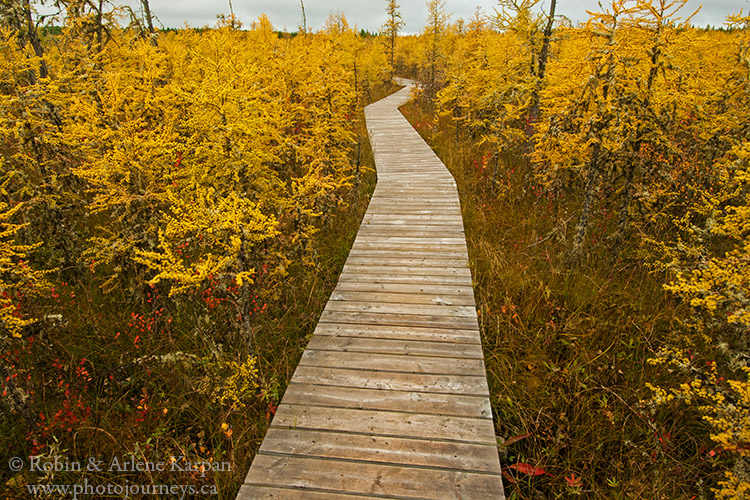 Note: The Boundary Bog Trail is set to close from August, 2020 until the following spring to allow for reconstruction of the boardwalk. 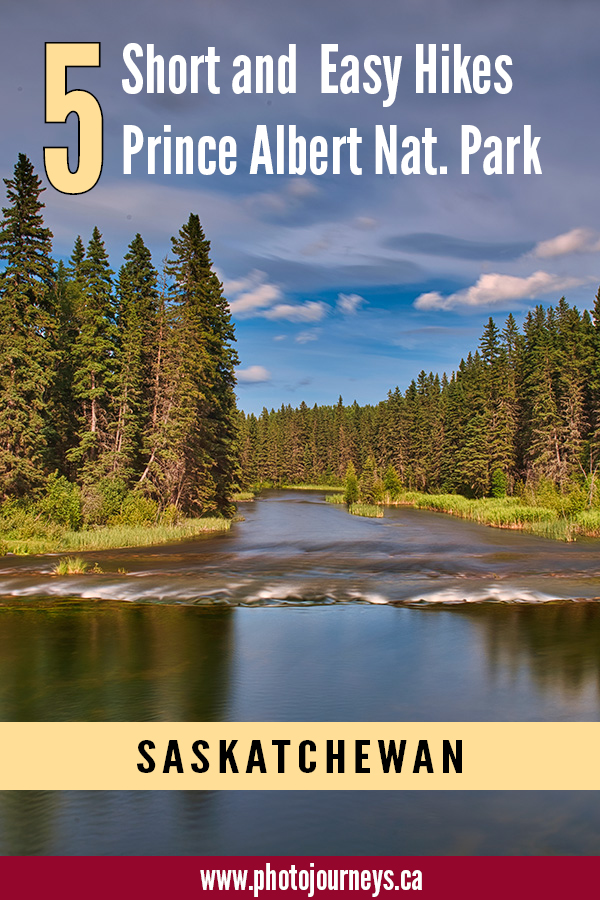