Right about now is generally the height of wildflower season in Saskatchewan, although every year is different and conditions vary considerably throughout the province. We’ve had higher than normal rainfall in early summer which has brought a profusion of colour in some areas. In our neck of the woods in the Thickwood Hills, we’ve never seen so many flowering scarlet paintbrush, for example. So where are some hotspots to look for a bounty of blossoms?

If we to pick one place in Saskatchewan for wildflowers, it would certainly be the Cypress Hills. Because the terrain is a mix of forest, grasslands, and highlands, we see plants common to all of those landscapes. The hills have their specialties such as sticky geranium and shooting star. This is the best place in Saskatchewan that we know of to find showy stalks of blue, pink, and mauve lupins.

Cypress Hills has two main wildflower seasons. The biggest bloom with the most variety is usually around late July and early August. But if you’re really into flowers, also consider mid- to late-June for wild orchids. There are more here than anywhere else on the prairies. The showiest is the Venus slipper, also called the Calypso orchid.

Uncultivated natural grasslands are prime wildflower habitat. The biggest publicly accessible tract is Grasslands National Park which can be ablaze with colour in favourable conditions. Rainfall determines how widespread and prolific the blooms will be, and in a wet summer the flowers seem to pop out everywhere, making the most of the moist conditions.

A smaller hidden gem is the Yost Wildlife Hike near Rockglen – a sign marks the trailhead just southwest of town along the highway. We were once there in a high rainfall year and couldn’t believe the amount of colour. As a bonus, there are wonderful views from some of the higher points.

Saskatchewan Landing Provincial Park is another good bet. The combination of open grasslands on the valley slopes, wooded coulees, and proximity to Lake Diefenbaker make for a variety of species. This area is especially great for prickly pear and pincushion cactus which bloom in early summer.

Practically anywhere along the Qu’Appelle Valley is great for wildflowers. Some easily accessible spots include Buffalo Pound Provincial Park, especially along the slopes, marshland and riverbanks in the Nicolle Flats Nature Area, and Echo Valley Provincial Park west of Fort Qu’Appelle. Other worthwhile areas include Hidden Valley east of Craven, or Fairy Hill, a Nature Conservancy property straight north of Regina along Hwy 6. However, almost anywhere along the valley is excellent wildflower country due to the combination of mostly natural grasslands on the valley slopes and the fertile river valley. For more ideas, see our posting on The Ultimate Qu’Appelle Valley Road Trip

Here too, the mix of habitats is what makes the area excellent for wildflowers. The highlands, dominated by Duck Mountain Provincial Park, have the most southerly boreal forest in Saskatchewan, combined with aspen parklands, numerous lakes, and wetlands. Our favourite part is Little Boggy Creek valley in the southern part of the park. Follow Ski Hill Road to its end in the valley near the Fen Trail, where you can take a boardwalk to see several rare plants in this perpetually wet landscape.

In mid-summer, it’s also worthwhile to take the minor road that continues past the trailhead for the Fen Trail to the meadows just beyond in the valley (only if road conditions are dry). This is usually prime wildflower territory, highlighted by displays of golden hoary puccoons.

Groves of aspen trees combined with grasslands, croplands, and plenty of wetlands make for a diverse habitat. Our favourite part of the parklands is the Thickwood Hills, northeast of the Battlefords. Much of what you see here is along the roadways. For ideas on drives check out our postings Thickwood Hills Saskatchewan Scenic Drive – Highway 378 and Saskatchewan Road Trip to the Crooked Bush. This summer has been especially colourful because of high rainfall early in the season.

The park preserves the transition zone from the aspen parklands to the boreal forest, with some fescue grasslands thrown in for good measure. Here too, we find a mix of southern and northern species, with the wealth of walking trails providing easy access to different habitats. Often you don’t have to look far; this summer’s high rainfall has produced some wonderful flower displays right beside the road.

Of course, this is only a small sample of places to look for wildflowers. It’s usually a simple matter of just going for a drive to see what’s around. A good field guide to wildflowers is certainly useful. But if you want something simple as a starting point, check out the Nature Companion – Western Canada, a free app that has a variety of plants and animals to guide you along the way. The app, which also has a desktop version, was developed by Andrew and Penny McKinlay of EcoFriendly Sask 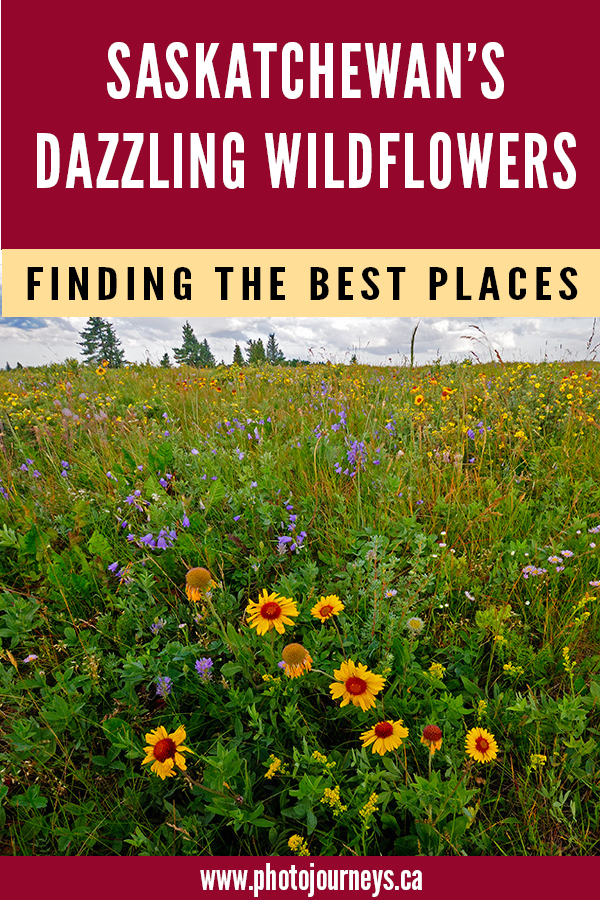