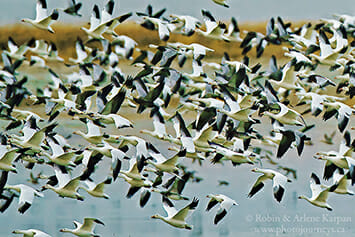 Just after dawn, the constant chatter that carried on all night suddenly gets louder, a sure sign that something is about to happen. Seconds later it reaches a crescendo of raucous “whouk, whouk” calls as countless wings flap and thousands of snow geese lift off en masse. The flying frenzy covers such an immense area that it almost obscures the sky. This thrilling spectacle is a highlight of one of Canada’s greatest wildlife migrations.

We’re on the shore of Luck Lake Heritage Marsh, a wetland in south-central Saskatchewan near Lake Diefenbaker. Smack on the Central North America Flyway, this region hosts hundreds of thousands of migrating waterfowl, the most plentiful being snow geese, often accompanied by greater white-fronted geese plus other species.

Snows are Canada’s most plentiful goose, with estimates ranging from over 5 million to closer to 12 million. After nesting in the Arctic, they head south in the fall to their wintering grounds in the southern United States and Mexico. Their numbers have increased rapidly over the past 50 years, so much so that scientists have expressed concern that they are becoming victims of their success, and are running out of prime nesting areas.

Their favourite staging area along this southward journey is southern Saskatchewan grain country which serves up a tasty buffet free for the taking. Some years they take a toll on unharvested crops, however, this year’s crop was already in the bins before the main waves of waterfowl arrived in early October. But plenty of spilled or missed grain remains in the fields to keep them around and well-fed.

Sandhill cranes stop here in huge numbers around the same time and for much the same reason. This is the most numerous crane species in the world, with the largest number living in Canada. Like geese, their favourite fall staging area is southern Saskatchewan.

Waterfowl prefer wetlands such as Luck Lake because it is close to feeding spots, and the shallow water is ideal for roosting at night. We arrive during the day and only see a smattering of birds here and there. Things change dramatically near sunset as wave after wave of geese and cranes return from feeding in the fields. Watching snow geese arrive is like standing in a gigantic snow globe as swirling masses of white birds slowly drift to the water.

Designated an Important Bird Area, Luck Lake is not only globally significant for geese and cranes, but also for tundra swans, Franklin’s gulls, various shorebirds, and a wide array of ducks. Swans are among our favourites. These long-necked beauties tend to be more relaxed than many other birds, practically posing for photographs.

Luck Lake is only one of many hotspots to see the great migration. Roughly halfway between Saskatoon and Regina, Last Mountain Lake National Wildlife Area is North America’s oldest bird sanctuary, established in 1887. It’s also the easiest hotspot to visit with a scenic 14-kilometre driving route through different habitats. We follow the route beside the lake and adjoining wetlands, through native prairie uplands, and across dykes used to manage water levels. While significant for a variety of bird species, come fall it’s the waterfowl migration that takes centre stage. Some years, geese numbers have topped 450,000.

An hour or so drive farther northeast brings us to the Quill Lakes International Bird Area, consisting of the three Quill Lakes (Big, Middle, and Little Quill Lakes) plus nearby Foam Lake Heritage Marsh. The area was designated a Ramsar Wetland of International Importance due to its importance for nesting and migrating waterfowl and shorebirds. Over a million birds use the area every year, and one-day counts alone have topped 300,000. Here we find huge concentrations of geese and cranes practically everywhere – near the lakes and adjoining wetlands, in crop fields, and even along the highway.

While the biggest waterfowl concentrations are usually close to a few key wetlands, during late September and most of October, large flocks congregate throughout south-central Saskatchewan. Driving along almost any road, we can often look up and see snow geese flying in their familiar loose U-shaped formation, or find them covering a stubble field like a blanket of snow.

The Quest for Whoopers

Finding our most plentiful waterfowl during migration is easy, but this fall we’re hoping to see and photograph one of the rarest and most famous birds in North America. While we have seen whooping cranes before, sightings have been fleeting or we haven’t been able to get close enough for photography. We only want to photograph these iconic birds when we can do so without disturbing them.

Whooping cranes have come back from the brink of extinction but are still rare and endangered. The population dropped to only 14 adult birds in the early 20th century. Thanks to ongoing conservation efforts in Canada and the United States, their numbers gradually recovered. Recent population estimates are over 500 birds.

Adults, with their pure white plumage and black wing tips visible in flight, can reach 1.5 metres in height — North America’s tallest bird. Their wing span can top an amazing two metres. Their unmistakable call sounds like a single-note bugle that is short but loud.

Whooping cranes nest in secluded and protected parts of Wood Buffalo National Park, straddling the Alberta/Northwest Territories border. Then each fall they head 4,000 kilometres south to their winter home on the Texas Gulf Coast. Their favourite place to stop and feed on this epic journey is central Saskatchewan, usually around mid-October.

The only glitch is that they are not always easy to find. Whooping cranes don’t always stop in the same place from one year to the next. They usually pick somewhere within 100 kilometres or so of Saskatoon, but only they know where that will be. Occasionally some get mixed in with sandhill cranes, but mostly whoopers travel separately in small flocks. When you’re that famous, why travel with the commoners?

We’re excited to hear reports of sightings about an hour’s drive north of Saskatoon and decide to check it out. Cruising slowing along several backroads, we scan the numerous marshes and small lakes, but no luck. Then as we’re travelling along the main highway in the area we spot white dots in a nearby field. A quick glance through binoculars confirms that we’ve found them, and there seem to be quite a few.

They are still a long way off but are constantly moving around, feeding on left-over grain in one spot then walking or flying a short distance to another. Whoopers spook easily so we want to be extremely careful not to disturb them. We pull off the highway then find a bush between the roadway and the fence lining the field. We set up the camera on the edge of the bush to remain partially hidden. Then it’s time to wait, and wait some more, all the while contending with the cold west wind.

Gradually the cranes move slightly closer and finally come within camera range, but just barely. We’re glad we brought our 600mm lens. While most cranes are feeding, some seem to be just hanging out. Every so often one makes a fuss by flapping its wings at the other birds. Most are adults, though there are also immature birds in their distinctive reddish-cinnamon colour.

We count 43 whooping cranes that we can see at the same time, plus we know that others are scattered around the field. Just a few years ago, seeing this many was unheard of. Finding a couple was noteworthy, and a half dozen amazing. But now we’re astonished to be looking at close to ten per cent of the world’s population. A fitting finale to a fall migration season packed with some of nature’s most breathtaking displays. 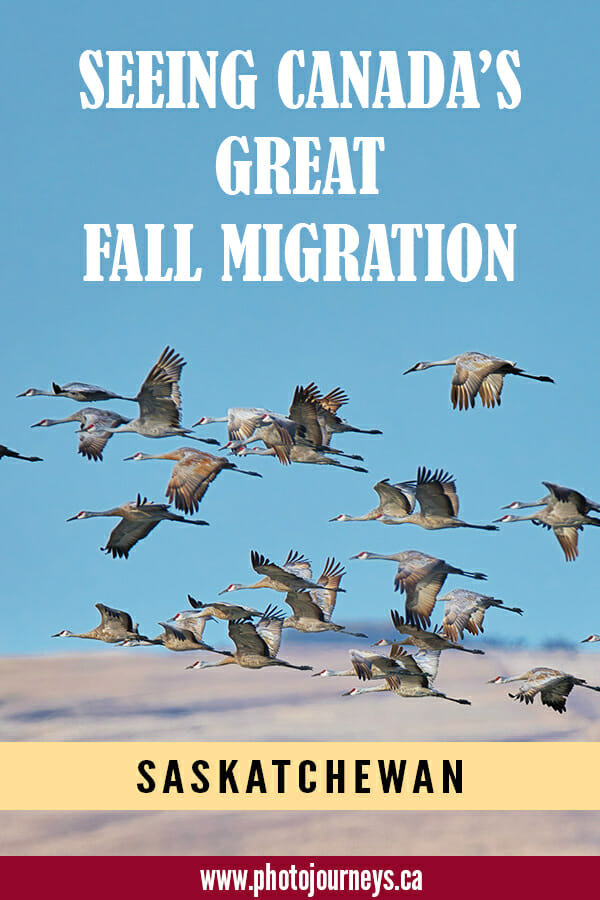