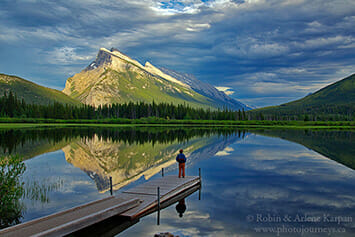 The scenery of Banff National Park is legendary, with 6,000 square kilometers of outstanding mountain wilderness. Before you wander too far afield in the park, it’s worth exploring incredible places that shouldn’t be missed in and near the bustling townsite. The Bow River Valley and powerful Bow Falls, hoodoos, Cascade Gardens, the gondola up Sulphur Mountain, the Banff Centre, Whyte Museum, Fairmont Banff Springs Hotel, and the Cave and Basin National Historic Site (birthplace of Canada’s national parks) are only a few of the many highlights.

Hiking and biking trails are everywhere, plus nearby scenic drives take you along the pleasant Golf Course Road, to the Norquay Mountain Lookout, Lake Minnewanka and Two Jack Lake, and our personal favourite – the Vermilion Lakes. When you’re ready to relax, check out the town centre for tempting eateries and watering holes.

Although you can visit all the attractions on your own, parking is sometimes tight at popular spots during busy periods. There has been an increased effort to encourage visitors to park their cars and get around using the Roam Transit system; their hybrid electric buses serve many attractions and even pick up passengers in the campgrounds. The buses have bike racks, and are wheelchair and stroller-friendly, and also carry skis and snowboards in winter.

More recently, a new option has emerged to introduce visitors to the Banff townsite and surrounding area while seeing some prime sights in comfort. Open Top Touring uses new custom-built buses, though the design harkens back to the 1930s era vehicle that the Brewster family used to take tourists around the Rockies nearly a century ago. Even the driver/guide is dressed in 1930s garb, and the background music features swing-era greats such as Benny Goodman. As the name suggests, the bus roof opens so passengers can stand up at the stops for better views or photos. The roof can also be closed in rainy or cold weather.

Starting at the historic Mount Royal Hotel in the heart of Banff’s downtown, the tour winds through the townsite, past several historic buildings, along the Bow River, and to Surprise Corner. Named for the surprising views that suddenly open up, here we look over a turbulent stretch of the Bow River just above Bow Falls, backed by the iconic Banff Springs Hotel.

Stories of the Early Years

A highlight of the tour is the wealth of fascinating stories from Banff’s early years. Today wildlife is protected to the extent that Banff residents aren’t even allowed to shoo away wild critters wandering into their yards. But it used to be quite different. As we drove by the Whyte Museum, our guide Pam pointed out the cabin that once belonging to Bill Peyto, one of Banff’s larger than life characters. Bill heard that the zoo in Banff was looking for a lynx for their collection. So he trapped one of the wild cats and put it to sleep with chloroform. But on the way to the zoo, Bill stopped by a Banff bar for a drink. As the chloroform started to wear off, the awakening lynx sent bar patrons running for the exits.

Another enterprising shop owner had a pet bear cub that he taught to wave at the kids and take treats that he conveniently had for sale in the store. One day someone laced one of the treats with chili pepper as a prank. The bear made such a fuss that authorities were called, and the incident is credited with leading to new regulations that wild animals no longer be allowed to be kept as pets in national parks.

Our bus continued along Tunnel Mountain Road and stopped at a viewpoint high above the Bow River, not far from the unusual hoodoos on the riverbank. The Tunnel Mountain name is everywhere – a major roadway, the name of the massive Tunnel Mountain Campground, as well as the mountain itself. But where’s the tunnel?

There is none; that’s right – Tunnel Mountain has no tunnel. During the building of the CPR, a surveyor proposed digging a tunnel through the mountain so the tracks could run right up to the Banff Springs Hotel. But when CPR big shot William Cornelius Van Horne got wind of the plan and especially the extravagant cost involved, he nixed the idea. Yet the Tunnel Mountain name stuck.

As we headed to Mount Norquay, we passed by the small airstrip that is still maintained in case of emergencies. Its origins in the 1930s rank as one of Banff’s most unusual stories. The Banff Springs Hotel was anxious to bring in renowned musician Benny Goodman. But when the “King of Swing” heard that the closest airport was in far-off Calgary, he wasn’t interested in coming. However, if there was somewhere closer to land his plane, he might consider it. So they built him an airstrip. By comparison, some of the outrageous demands by today’s spoiled rock stars seem almost reasonable.

Our bus then wound up the switchback curves of Mount Norquay. Famous as a winter ski resort, it provides some of the best views around in summer. Partway up, a natural open meadow stands out from the otherwise forested mountain slope. It’s fairly common to see wildlife such as bighorn sheep hanging out in this area. From here we look down over the entire townsite, the Bow River Valley, and the mountains beyond. 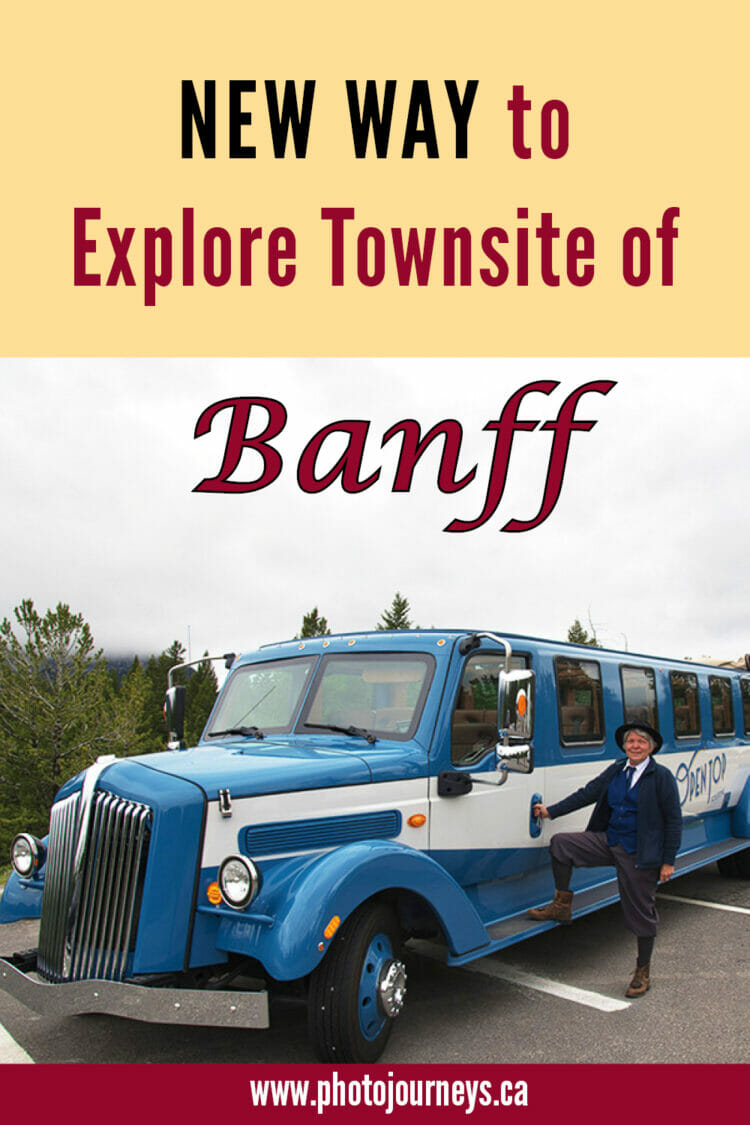