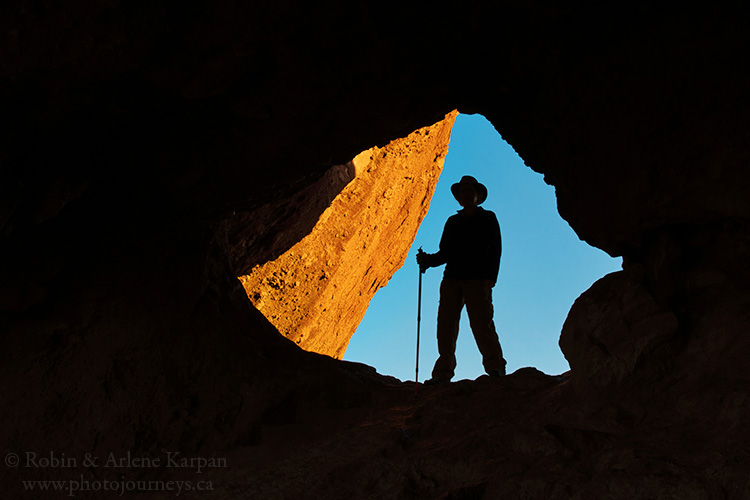 We first did a posting on visiting the Hole-in-the-Rock (that’s its official name) last year. Since then, we were fortunate that the image won First Place in the Best People Photo category in the SATW (Society of American Travel Writers) Canadian Chapter Awards.

Here are the judges’ comments: This iconic picture speaks volumes about the sense of adventure and exploration, which is part of the allure of the travel experience. The generic “traveller” is framed dramatically, backlit, in an irregular opening with a hint of rock that nicely contrasts against the blue sky.

We were especially pleased that the judges thought that the photo portrayed a sense of adventure, since that was the mood that we were striving for in the image. The look or mood of an image can change dramatically depending upon choices in camera angle, framing, lighting, exposure settings, and other factors. Looking at this scene without knowing where it is, we might imagine the entrance to a deep cave or perhaps some hidden away locale high in the mountains, accessible only by an arduous hike. But in reality the setting was a park close to a large urban area, and accessible by less than a 10-minute walk from the parking lot.

We were in Phoenix, Arizona and planned to come to nearby Papago Park for sunrise. The park is dotted with sandstone buttes, one of which has the Hole-in-the-Rock, which turns a brilliant golden colour when the sun is low in the sky. Since Phoenix is in the desert, a blue sky is almost guaranteed. The Hole-in-the-Rock is a popular spot which is normally bustling with visitors. But by coming first thing in the morning, we were fortunate to have it all to ourselves for the first 20 minutes or so.

The “generic traveler” in the photo is Arlene, posing at the entrance with a walking stick. Just after the sun came up, the background rock face in the sun turned gold, while there was extremely little light in the cave-like formation. I metered on the golden rock, so it and the sky would be properly exposed while everything inside, including Arlene, would be mostly in silhouette, with only a hint of light. I chose a very narrow aperture setting of f/18 in order to get the maximum depth of field in the scene. At the time I hadn’t decided whether the final image would end up being mostly a silhouette or if I would open up the shadows during processing to show more detail.

The RAW image out of the camera needed very little processing. RAW files, by their nature, look quite flat since they preserve more of the dynamic range between light and dark. About all it needed was to bring back the colour in the background rock and sky to what it actually looked like, plus cropping in slightly. I decided against opening up the shadows in the cave to show detail. The main subject of the image is the opening in the rock, contrasting against the golden rock and blue sky – not what’s inside the cave. Leaving it dark helps to portray a sense of mystery as to what is inside and to draw your eye to the main subject of the photo. 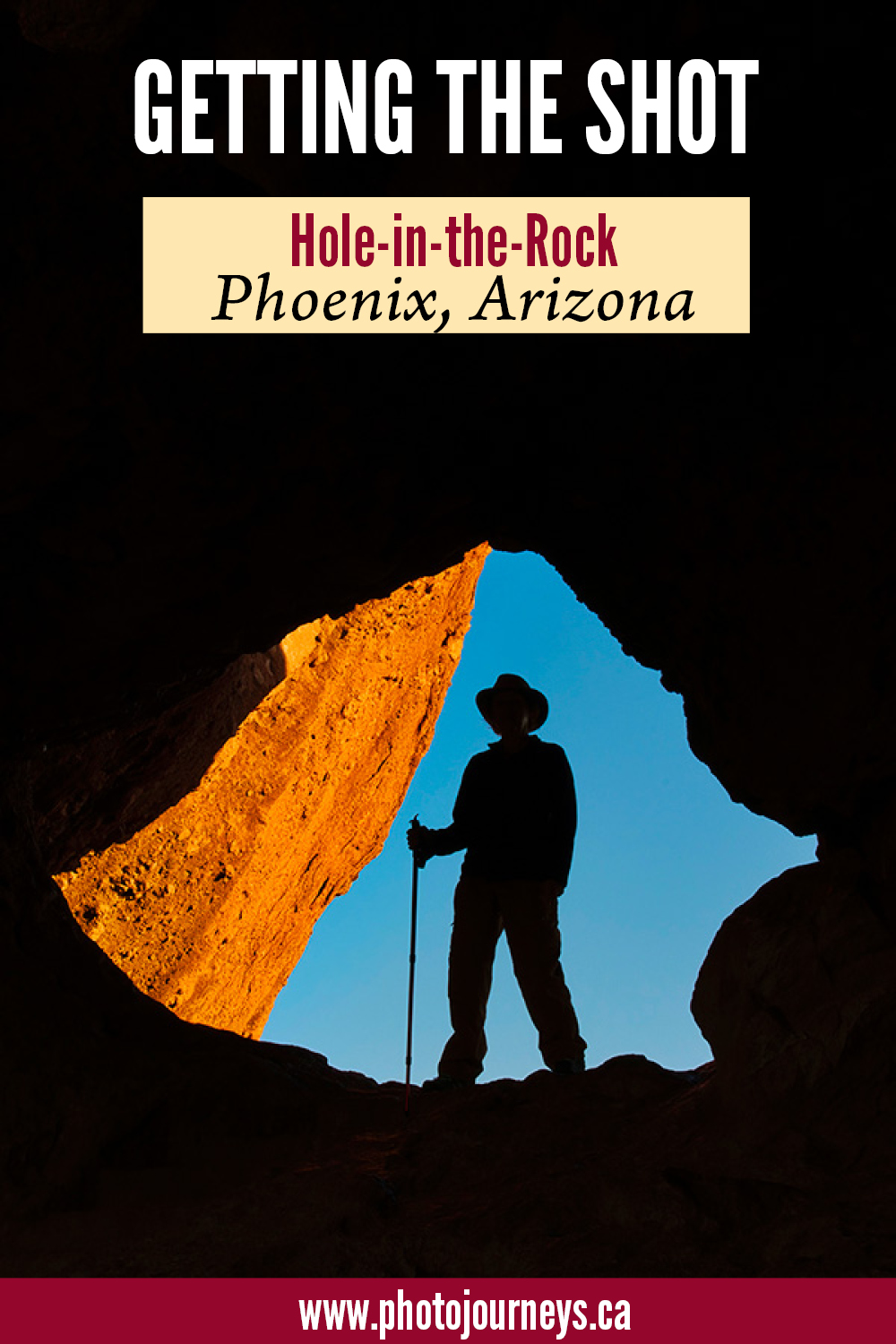