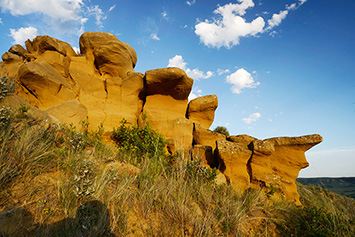 The Cypress Hills abounds in scenic driving routes, especially around the town of Eastend, so named for being at the east end of the Cypress Hills. The one that tops our list for photography is a 50-km or so loop trip from Eastend, combining Ravenscrag and Middle Bench Roads. We have more details in our new book, Photographer’s Guide to Saskatchewan, but here’s a brief overview.

Head west of Eastend on Grid Road #614, then after 2 km, turn left onto Ravenscrag Road which winds along the Frenchman River the entire way with one spectacular view after another. The north slope of the valley is heavily eroded in places, revealing several seams of bright white mud containing kaolin, which is highly prized in making ceramics because it retains its white colour after firing. Near the start of the road is a pyramid-shaped hill known as Chocolate Peak, where kaolin mining didn’t go as hoped. Many years ago, some miners had a smart idea–burn off the seam of coal in the hill to make it easy to get at the kaolin. Not so smart after all. The coal burned slowly for years, baking the valuable clay and turning everything brown. About halfway along you can see Jones Peak, the highest point along the north rim, marked by a communications tower.

For photography, Ravenscrag Road has inviting light from early to mid-morning, then again from late afternoon to early evening. In midsummer, if you wait until too late in the evening, the sun will be too far to the north to illuminate the north slope, which is the most impressive part of the valley. When we stay in Eastend, which has a nice campground near the river, we like to drive Ravenscrag Road in late afternoon, then return along Middle Bench Road in the evening, a nice loop trip that makes best use of the light.

Ravenscrag Road ends at a T-intersection with a grid road near Ravenscrag. Turn north, cross the river, then take the first road to the east, which is Middle Bench Road. This route takes you higher into the hills, across open rolling pastureland of native prairie. The main feature of this scenic route is Jones Peak. The approach road to the peak is easy to find; watch for the communications tower on the valley rim. It’s named for Corky Jones, a local resident and amateur palaeontologist who unearthed many fossils, which in turn led to the area’s famous dinosaur discoveries.

The peak offers wide views over the Frenchman River Valley. This is a wonderful spot to come for sunset when the low sun illuminates much of the valley. We like to arrive well before sunset so that the sun still lights up some of the north slope, especially the impressive sandstone formations near the top. 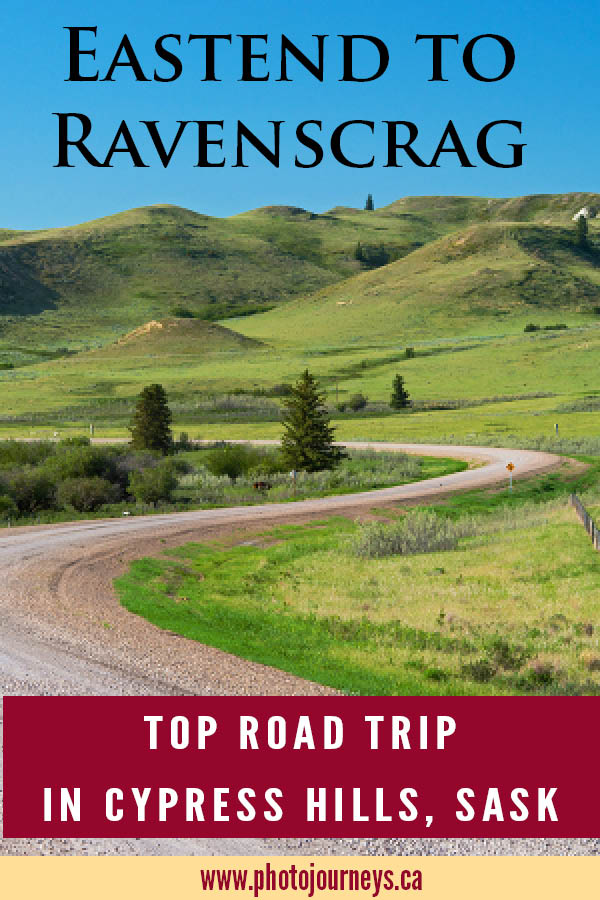 13 thoughts on “Eastend to Ravenscrag top drive in Cypress Hills”