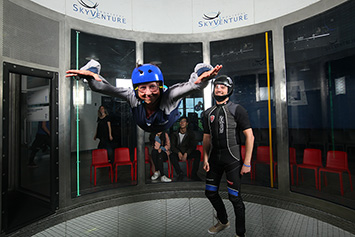 Laval is both a city and an island, separated from the mainland by the Riviere-des-Mille-Iles, and from the island of Montreal by the Riviere-des-Prairies. With the slogan Urban by Nature, Quebec’s third largest city combines urban life and natural spaces, along with some of the coolest activities to satisfy everyone from adrenaline junkies to science geeks. If you have a car, there’s free parking everywhere, which is quite unusual for a city this size. And it you don’t have a car, you can use the handy 360 Bus Line, a free service that connects many attractions, hotels and metro station.

Aerosim Experience bills itself as Canada’s first professional-level flight simulator open to the public. The centrepiece is a fully functional, full-scale replica of a 737 cockpit. This is combined with several high resolution destinations from around the world, so when you look through the window, you have a 200-degree computer-generated view of the airport where you takeoff and land, complete with terrain, buildings, and landmarks. An instructor (all instructors here are licensed pilots) guides you through the process of flying the plane (throttle, airspeed, brakes, etc). There are different levels of difficulty, from a straightforward fair-weather flight, or with added hazards such as fog, snow or turbulence to up the challenge. You choose your destination – Arlene chose Vancouver Airport, and Robin Hong Kong Airport (why start with an easy one?). We’re pleased to report that the plane landed safely in both cases, though passengers were likely terrified.

Aerosim also has two F16 fighter jet simulators where various perilous missions are programmed in, complete with exciting aerial battles with the enemy. This had more of a video game feel to it, but was fun nonetheless. We regret to report that neither of us survived the battle.

In addition to catering to aeronautical enthusiasts and those who are just curious about flying a big plane, Aerosim runs a cognitive-behavioural therapy program to help people overcome the fear of flying. www.aerosimexperience.com

What? Surfing this far inland? Yep, and because it’s indoors, you can surf year-round. Maeva Surf has a powerful wave meant for “flowboarding”, which is a mix of surf, skateboard, and snowboard techniques. Don’t be fooled into assuming this is simply a wave pool. Loose your balance and you quickly get swept away to the back of the pool. Fortunately, it’s a safe environment and unlike ocean surfing, you don’t have to worry about getting dashed on rocks or attacked by sharks. 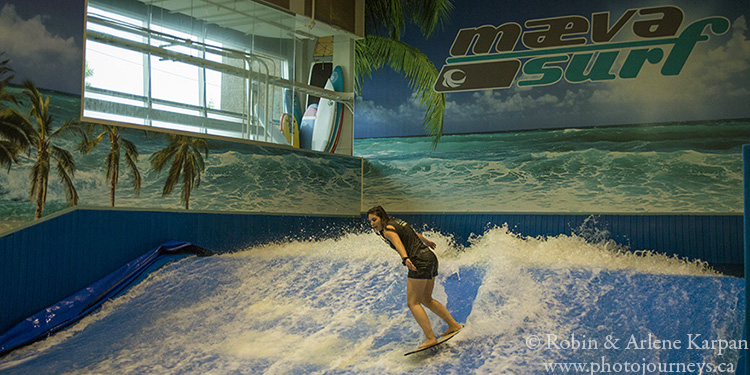 You can take lessons on how to surf the wave. One of the instructors, Isabelle, demonstrated what can be accomplished with practice, showing an impressive array of perfectly controlled manoeuvres from flips to casually sitting in one spot while the water roars by. With lessons, they say that almost 95% of visitors manage to surf on their first visit. www.maevasurf.com 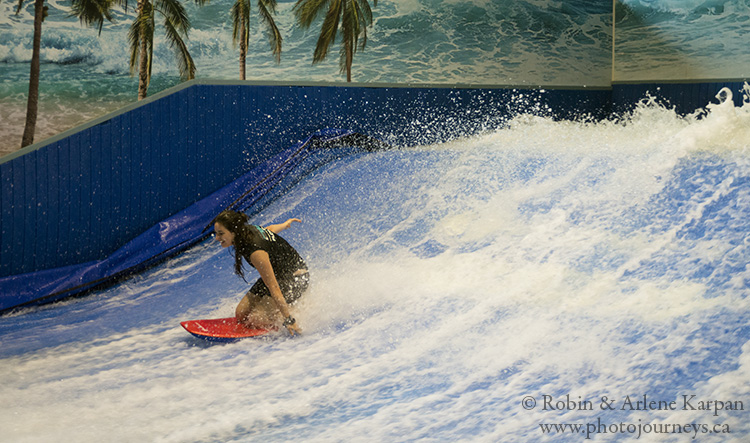 The Riviere-des-Mille-Iles separates the island of Laval from the mainland. Near the park it widens out with a maze of small islands – hence the name Mille-Iles or Thousand Islands. This is the most important protected wildlife sanctuary in the Laval-Montreal region, an oasis of lush greenery with islands, forest, and marshes close to the city. We went for a short kayak trip, circling one of the large islands. Our route took us beside a spacious house that used to be the home of famous singer Celine Dion. www.parc-mille-iles.qc.ca

Escalade Clip ‘n Climb has 34 vertical walls, enough to satisfy the most diehard adrenaline junkies. Each varies as to style and difficulty, with some especially challenging. Each wall has an automated belay device. You clip it onto your harness and the cable winds into the device as you get higher. If you slip and fall (almost inevitable for beginners), the cable lets you down in a slow and controlled manner. If you make it to the top, you are supposed to simply lean back and let go, letting the cable bring you slowly down. This was the first time either of us have tried climbing walls (except when our office work gets overwhelming), so the idea that you can merely lean back and let a machine take you safely down seemed like a leap of faith, but fortunately it works.

For the ultimate rush, one of their devices is actually called the Leap of Faith. From an eight-metre high platform you jump off and try to grab onto a handle or some other contraption. You really need to trust your harness here. Then there’s the Vertical Drop Slide. Wearing a special super slippery suit, you hang onto a handle as you are hoisted over 10 metres high. When you let go, you fall vertically at first then onto a gradually inclining slide to slow you down. www.clipnclimblaval.ca

Walk on the Moon (well…sort of)

The Cosmodome is billed as Canada’s only museum entirely dedicated to the space sciences. There’s everything you can think of relating to space travel, from scaled reproductions of the solar system to the technology of space ships, or the challenges of a Mars mission. Kids’ programs are especially popular; at space camps they live on site and really get immersed in living the life of astronauts. Several types of simulators give you a taste of space travel. Robin tried out the reduced gravity machine that mimics the same amount of gravity you would feel while walking on the moon. Step too hard and you practically go bouncing to the roof.

That’s right, skydiving indoors! This tops our list as the best of the best in Laval. In fact, we rank it among the coolest things we’ve done, period. We did an earlier, more detailed blog posting specifically on our experience at SkyVenture Montreal here.

This is an experience that will blow you away – literally. Indoor skydiving, also known as body flight, is possible with a powerful wind tunnel that blows air close to 200 km/hour, sometimes more, about the same speed that you would experience in a skydiving free-fall. That’s enough to keep you suspended in mid air. Since they can adjust the wind speed, it can be cranked up so you can fly upwards, something you can’t do in traditional skydiving.

The wind tunnel at SkyVenture Montreal was the first of its kind built in Canada, and is still one of very few places in the country that offer this experience. The floor of the flight chamber is a trampoline-like mesh of steel cables that the wind flows through. An instructor is always with you, guiding your movements and helping you manoeuvre around to get the sensation of free-falling.

We each did two, one-minute flights, which is the approximate time for a freefall portion of a skydive. The third flight was two minutes, the grand finale being a flight up – way up and fast. Your instructor holds onto you, they quickly crank up the wind velocity, and together you go shooting up to the top of the 45-foot wind tunnel. They cut the wind and you come falling down, only to be shot up to the top again with another blast of wind. This happened three times in quick succession – the ultimate adrenaline rush of being a human yo-yo.

As luck would have it, our instructor, Guillaume, is a champion in this sport and will be representing Canada in the 2017 Indoor Skydiving World Championship, to be held in Laval, October 18-23. The freestyle acrobatics they do at the professional level almost defy belief. The event will be live-streamed, so we’ll definitely be watching to see how Guillaume does. www.skyventuremontreal.com

Eat, Drink, and be Merry

All of that flying, climbing, and surfing can work up quite a thirst and appetite. If you fancy a sip of wine, Laval has one of Quebec’s top wineries – Château Taillefer Lafon. It’s the first vineyard in Quebec authorized to use the appellation “Château”, normally reserved for European vineyards. Even the striking building meets expectations of what a Chateau should look like. But when it come to wine, it’s what’s in the bottle that really matters. Their white, red, rose, and ice wines have all done well in international competitions. www.chateautailleferlafon.ca

Laval has so many places to eat, from casual to fine dining, that it would be almost impossible to come up with a complete list. For the ultimate in fine dining, Le Mitoyen often tops the list. Specializing in French cuisine, the well-established restaurant has been around for over 35 years, so they’re obviously doing something right. It’s situated in a former farm house, built in 1870, and decorated in traditional country style. The key to its success is chef Richard Bastien. Le Mitoyen is particularly famous for its multi-course dinner, with each course paired with a different wine. 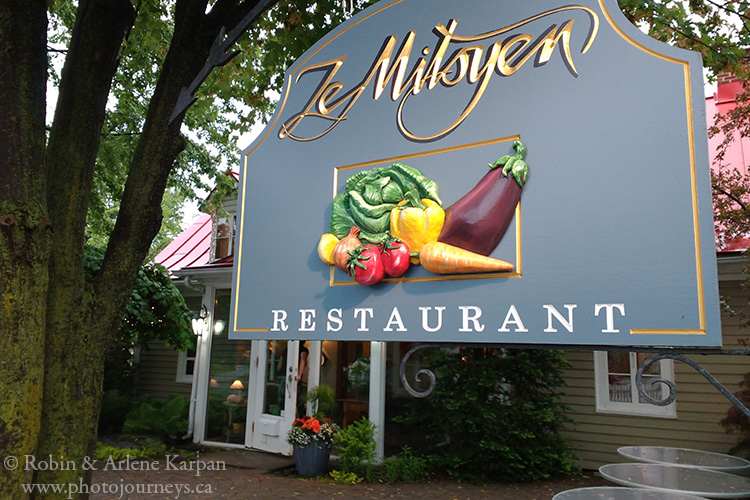 Take a Side Trip to Montreal

Montreal is just across the river from Laval, and is easy to reach on Montreal’s Metro train. In fact, many visitors find it more convenient to make Laval their base when visiting Montreal. Hotel prices are considerably lower here (check out the Hilton’s packages and suites), and if you have a car, there’s free parking everywhere, or you can take the free 360 bus to the metro station. 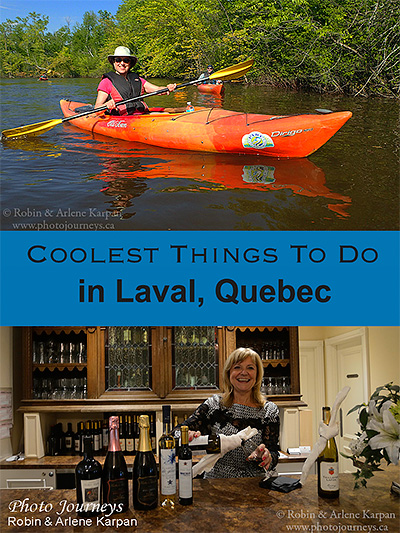