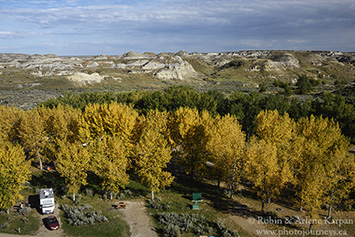 
Alberta’s Dinosaur Provincial Park is worth a visit anytime, but we think that fall is special for several reasons. The mostly open prairie of southeast Alberta can get a tad hot in summer, but September brings welcome relief from the heat while usually still remaining pleasantly warm. The park is so popular in summer that you normally have to book the campground in advance. When we visited last September, there was plenty of space available, although weekends were noticeably busier than mid-week.

For photographers, fall serves up some additional treats to the already compelling landscape of badlands and grasslands. The Red Deer River that runs through the park is lined by some impressive stands of huge cottonwood trees. Come mid to late September, they turn a glorious golden colour. The campground also has some attractive cottonwood stands.

Photographing the hoodoos and other badland formations is best done around sunrise and sunset. In early July, the sun rises around 5:20 am and sets around 9:40 pm, whereas in mid-September, sunrise is around 7:00 am and sunset about 7:30 pm, allowing the poor photographer more needed beauty sleep. 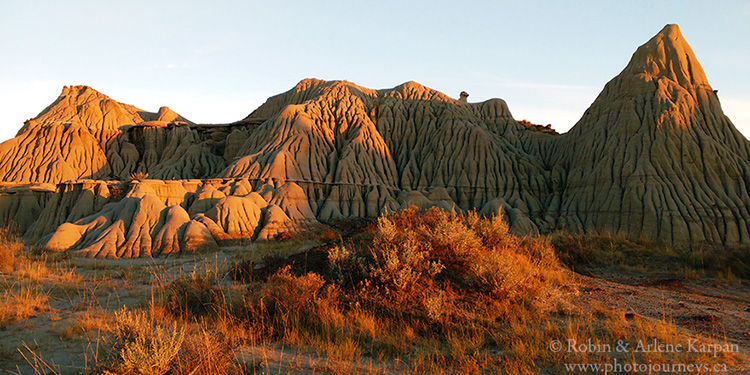 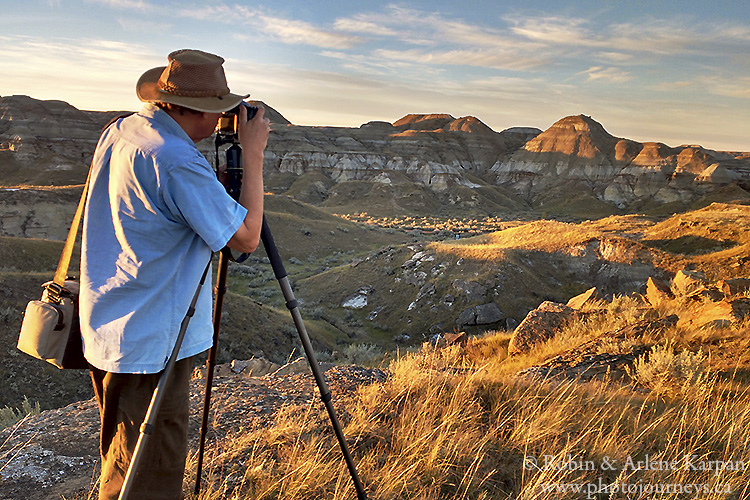 Dinosaur Provincial Park was designated a UNESCO World Heritage Site in part because of its incredible scenery, but also for having the world’s largest deposits of dinosaur fossils from the Late Cretaceous period about 75 million years ago. Some 50 dinosaur species have been identified. One major find was a bone bed of more than 200 Centrosaurs (horned dinosaurs) believed to have perished in a flash flood. Scientists have found fossilized remains of a wide array of ancient creatures, yet it always seems that the dinosaurs dominate centre stage. We were impressed by the near metre-long fossilized turtle shell displayed in the visitor centre. 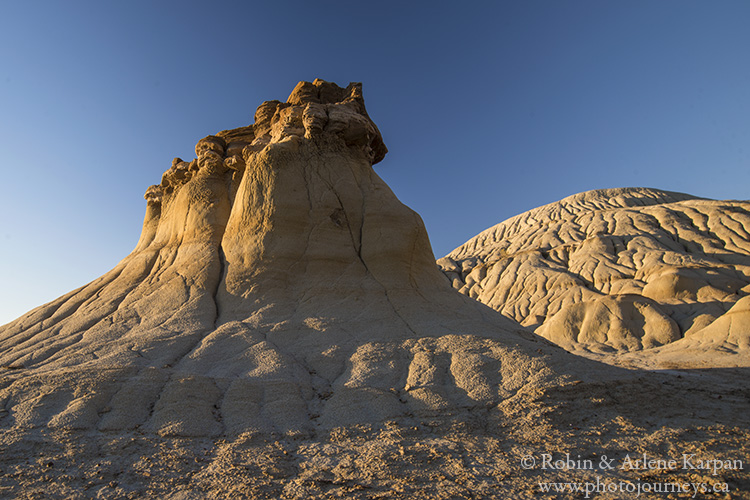 The park has two parts – a public area with a visitor centre, campground, scenic driving route and walking trails, plus a nature preserve where access is allowed only on guided excursions.

The park runs several interpretive programs, including a bus tour into the preserve, close-up looks at ancient bones, and guided hikes. If you were ever itching to see what kinds of things palaeontologists find, there’s even guided excavations to participate in a dinosaur dig. 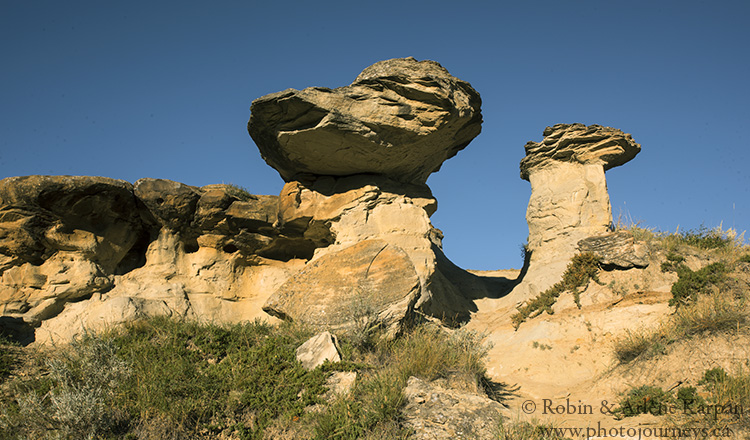 We took part in a fossil safari where a park guide took us to a bone bed, a large area where ancient bone fragments from many different species lay scattered. We saw jaw pieces of a Hadrosaur (duck-billed dinosaur), soft-shelled turtle skin (now rock hard), teeth from smaller creatures, petrified wood, and much more. Some large bone fragments were fairly obvious, but many smaller pieces were tougher to identify. The purpose of the tour was to learn to identify fossils, since it’s not always easy to differentiate between chunks of rocks and bone. “When you’re not sure, lick the tip of your finger and touch the piece,” explained our guide, Courtnee. “If it sticks when you pull your finger away, it’s bone.”

As important as the fossils may be, for the photographer, it’s the breathtaking scenery that stands out – the largest expanse of badlands anywhere in Canada. For sunrise, it’s hard to beat the view right from the campground, backed on the west by a high ridge of badland formations and hoodoos. Simply sip your morning coffee in your campsite and wait for the right light. A staircase up the ridge leads to the Coulee Viewpoint Trail, one of five short interpretive walking trails.

Our favourite walk for sunset was the Badlands Trails, a 1.3-km loop within walking distance of the campground and with evening light on some intriguing badland formations.

The Cottonwoods Flats Trail differs from the rest because it follows the flood plain next to the Red Deer River, home to large 200-year-old cottonwood trees.

The highlight of our visit was undoubtedly the Sunset Tour. Also billed as a trip for photographers, it hits the most scenic spots in the Natural Preserve at the prime time for photos. Hoodoos, wildly sculpted hillsides and other fascinating features came to life with deep tinges of gold and crimson. A popular feature is known as “Phred the Camel.” Look at it at just the right angle and it resembles a camel, complete with a pyramid behind it. 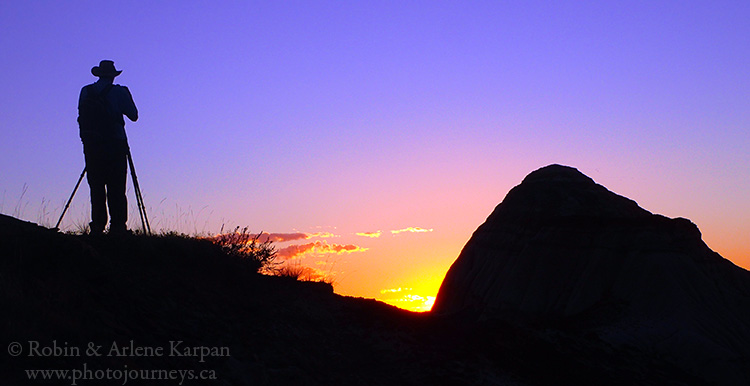 Just before sunset, we arrived at the Valley of the Moon, an other-worldly, boulder-strewn terrain that you can easily imagine as a moonscape. Our visit coincided with a full moon, so we watched the sun disappear to the west and the moon rise in the east, making for a magical combination.

Dinosaur Provincial Park is in southeast Alberta, about 48 km northwest of the town of Brooks on the Trans Canada Highway. Park programs operate from mid-May to mid-October. Bookings for tours and the campground are advisable anytime and generally essential for mid-summer. For more information, visit www.dinosaurpark.ca, or www.canadianbadlands.com 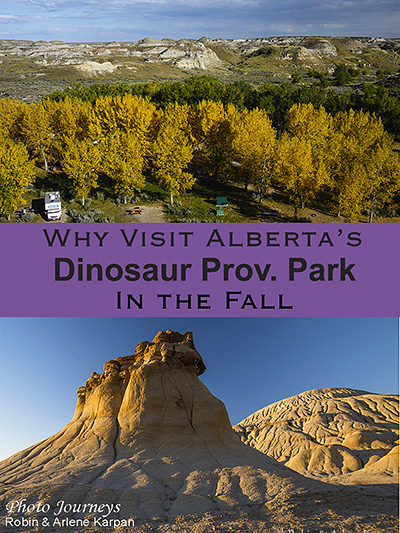