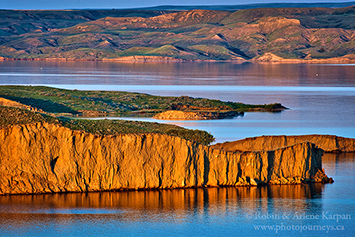 Massive Lake Diefenbaker dominates summer recreation in southern Saskatchewan. Its 800 kilometres of shoreline boasts three provincial parks, three regional parks, plus various recreation sites. Most visitors have favourite spots, but when we looked at including Lake Diefenbaker in our new book, Saskatchewan’s Best Scenic Drives, we decided to look at the big picture by circling the entire lake. What impressed us most was the tremendous variety of photogenic landscapes, including one-of-a-kind and little-known gems. If you like scenic drives, this is one not to miss.

The lake was formed when Gardiner Dam was built on the South Saskatchewan River. Most of the land surrounding it on the north end is part of Danielson Provincial Park. Fishing is the big draw, along with water sports and hiking, including parts of the Trans-Canada Trail through wooded coulees and lakeshore.

A bit south, a lesser-known attraction is Jack Hitchcock’s cabin, constructed in 1904 by the larger-than-life character who wore buckskins and carried a six-shooter. The simple log cabin remains exactly as the early pioneer left it, including home-made clothes, basic tools, and a hole in the door so his many cats could come and go as they pleased. To get there, head to Hitchcock’s Hideaway resort east of Birsay.

Beechy is the jumping-off point for Prairie Lake Regional Park right on the shore of the lake. The prettiest part of the road is near the end as it winds more steeply around curves framed with grassy slopes. At the regional park you can walk around the shoreline to see formations such as in the first photo of this post.


Saskatchewan Landing Provincial Park, at the lake’s western end, is famous for its iconic landmark, the restored Goodwin House, a 1905 stone building that now serves as the park information centre. Hiking trails lead into the hills with outstanding views over the lake. The park even has an equestrian campground for those exploring the park by horseback.

To travel the south shore, head south of Saskatchewan Landing on Highway 4 to Stewart Valley, then take the grid road heading east. Before long, you’re taken by surprise as the road drops into a beautiful broad valley carved by Swift Current Creek.

At remote Herbert Ferry Regional Park, they have decided to keep things simple, with no electricity and only basic facilities. It appeals to those wanting a quiet getaway, with lakeside camping at bargain prices. The drive in alone is worth the trip, as the road winds through rolling hills with dramatic vistas.

Continuing east, the main road runs through the scenic Vermillion Hills as it curves north to Riverhurst, site of the lake’s only ferry crossing. Nearby Palliser Regional Park is the exact opposite of Herbert Ferry, bigger and busier, with all the bells and whistles of a popular lakeside park and resort.

For another must-see highlight head to the sand dunes of Douglas Provincial Park on the eastern arm of the lake. After a short hike, you enter another world of vast active dunes with rippled ridges, bowl-shaped blowouts, and trees undermined by blowing sand.

Just to the north, Elbow Harbor Recreation Site is home to a golf club and marina for sail boats. You don’t have to be a golfer or sailor to enjoy the postcard setting of the protected cove filled with yachts. In town, a museum features a restored sod house, and near the grain elevator, an impressive Peace Tower built by renowned sculptor Joe Fafard dominates a park.

To do the entire drive, count on more than 500 kilometres, including many of the sidetrips. The Lake Diefenbaker chapter in Saskatchewan’s Best Scenic Drives has detailed descriptions of these and many more attractions, plus maps and precise directions on travel routes. The book is available at major bookstores and gift shops throughout Saskatchewan, or directly from Parkland Publishing.

For more information on the area visit Lake Diefenbaker Tourism, and Tourism Saskatchewan 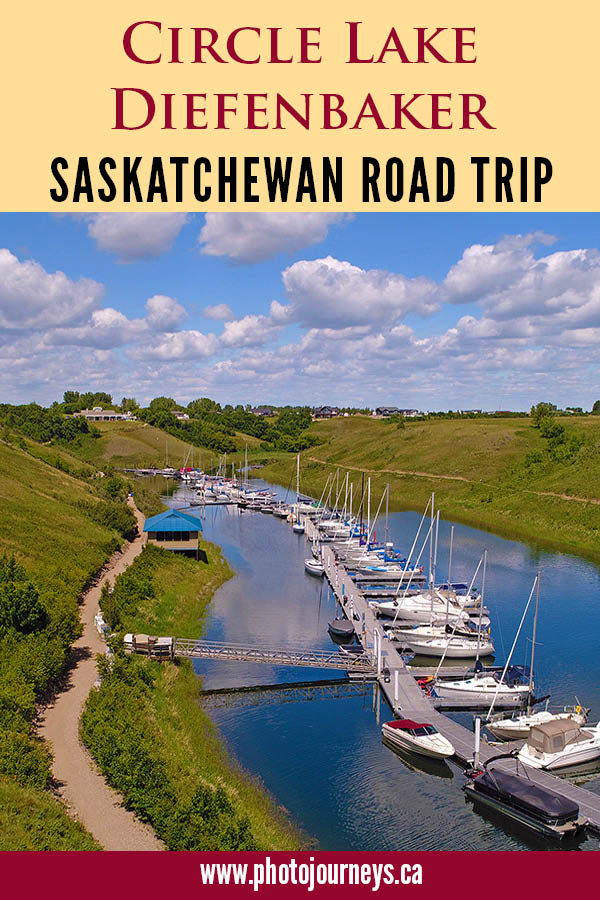