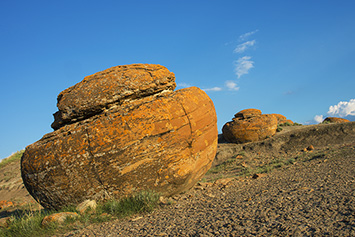 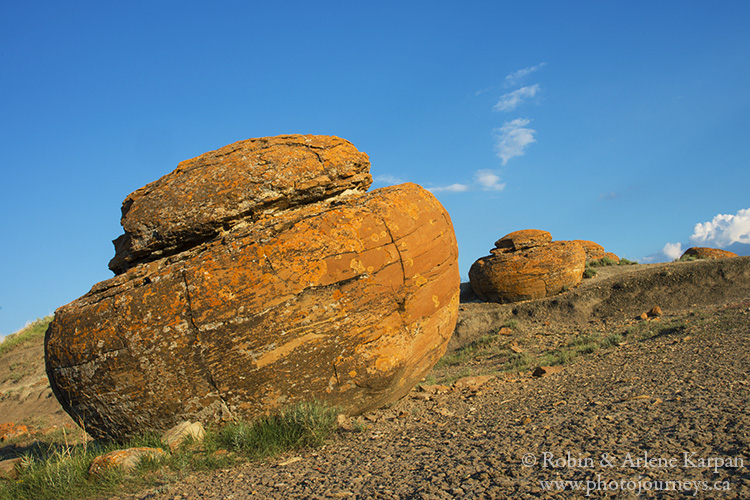 Alberta’s Red Rock Coulee is one of the most unusual and photogenic spots on the Canadian prairies. We were extremely impressed by our first visit, our only regret being that clouds moved in and we weren’t able to get golden-hour light to photograph the strange orange-red rock formations. Not that the even light of a cloudy day is bad, mind you. Indeed, light filtered by clouds is ideal for photographing details such as wildflowers, lichen formations, and close-ups.

This time around, however, we had it all. As we left Medicine Hat for the half-hour or so drive, storm clouds filled the sky, but by the time we arrived, Medicine Hat lived up to its reputation as one of the sunniest places in Canada. Clouds cleared and the light just got better and better as the evening progressed, transforming the already orange-tinged rocks into super-saturated spheres that seemed to glow. The grand finale came around 9:30 pm as the sun set over the magical landscape. 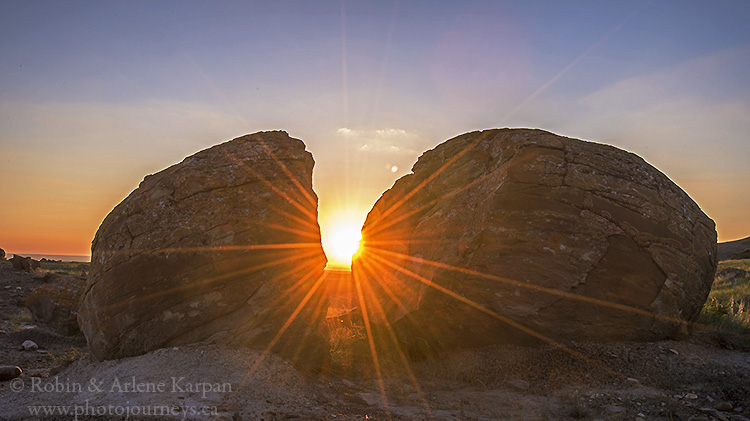 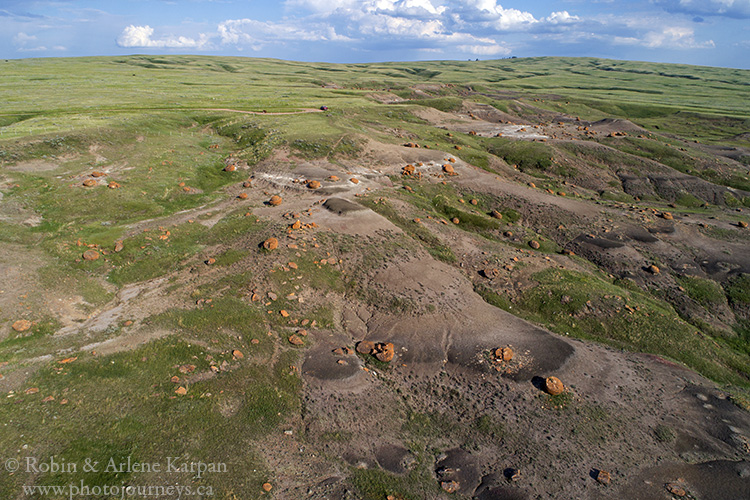 Arriving on the valley rim, we peer into a rugged coulee of badland formations. Between the eroded slopes, native prairie covers the undulating treeless landscape where wildflower blossoms vie for space among the needle-and-thread grass, sagebrush and junipers. 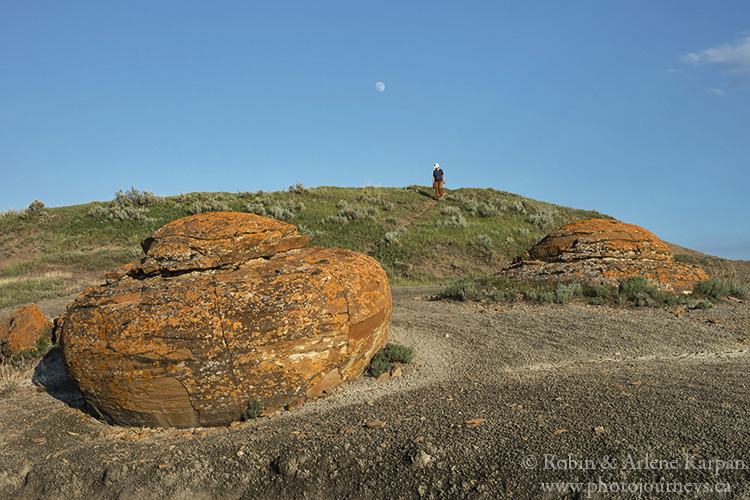 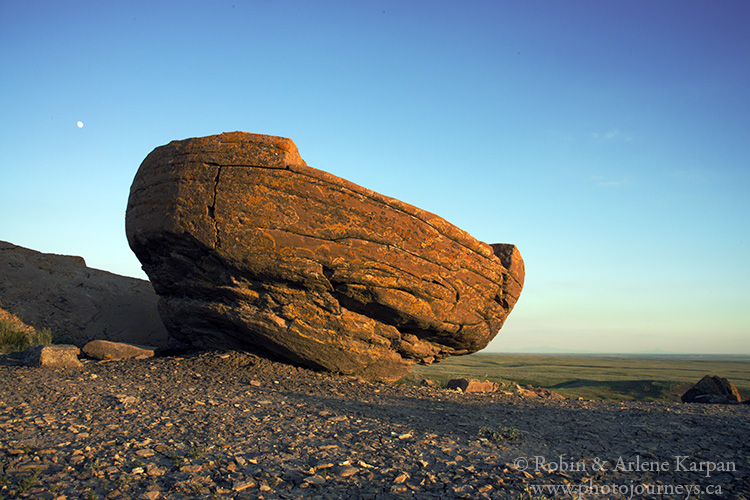 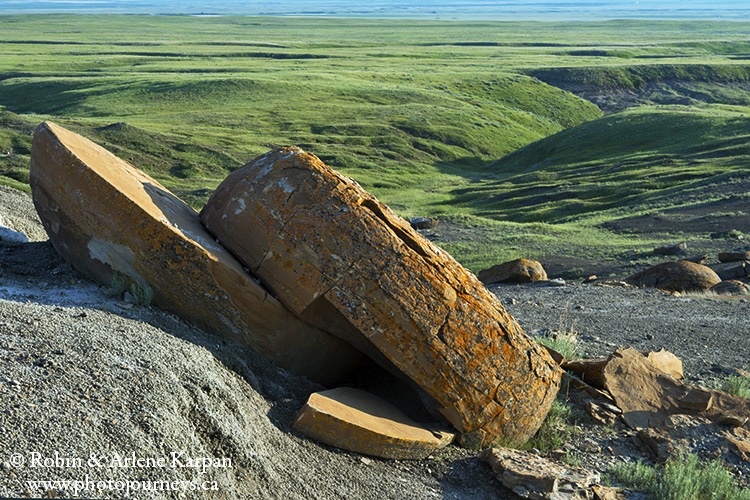 Red Rock Coulee Natural Area lies hidden in southeastern Alberta, about 50 kilometres from Medicine Hat. Covering 800 acres, the crown land is designated as a natural area by Alberta Parks. This is a low key park, with a parking area, some basic signage, and one picnic table. Though a geological wonder and a scenic gem, Red Rock Coulee isn’t widely known and doesn’t get a lot of visitors. Don’t be surprised if you have the whole place to yourself. 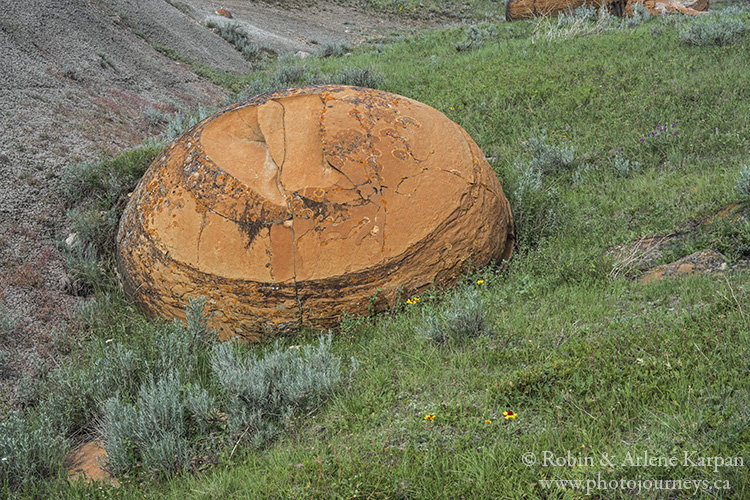 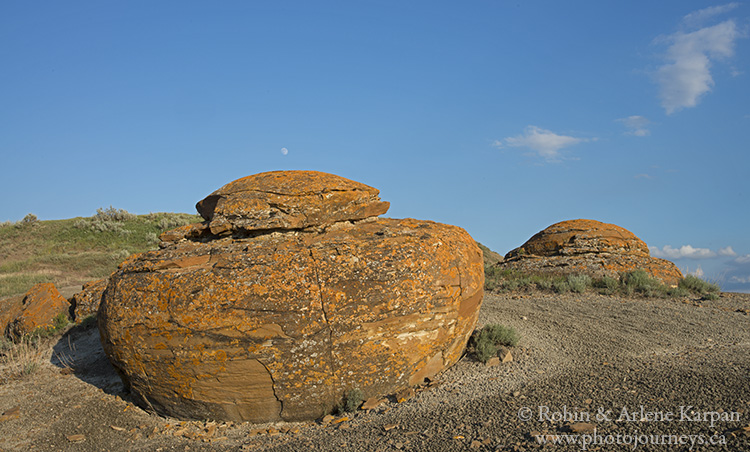 Walking into the valley is like entering another world or stepping onto the surface of the moon or Mars. While rock-strewn coulees are not uncommon, this one is eerily different because of the consistent shape of many boulders, their sizes and brilliant colour. Several are almost perfectly round, but flattened on the top and bottom, like curling rocks or hamburger buns. Concretions have formed in many parts of the world, but these are considered some of the biggest anywhere and among the most flashy. 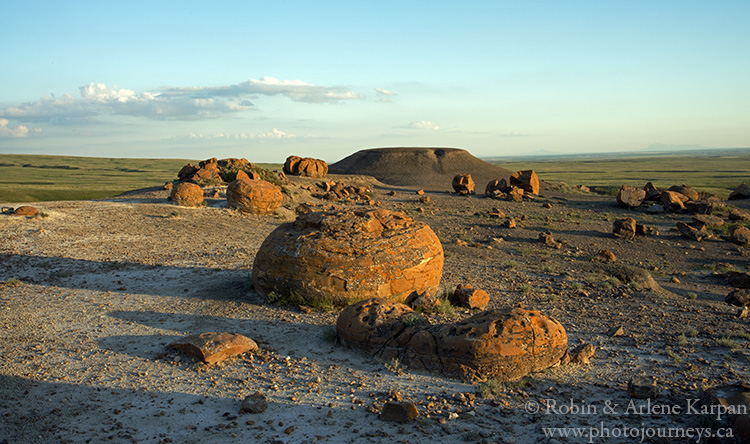 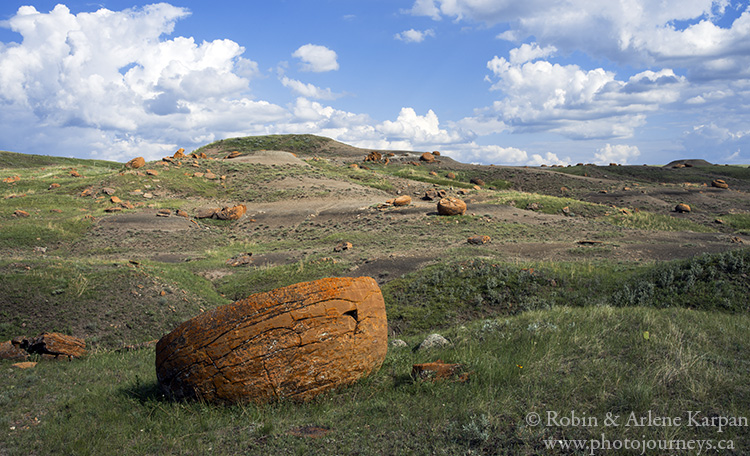 Many rocks have cracked open, some of the breaks so straight that they seem to have been cut by a precision instrument. Inside, we can sometimes see concentric circles, somewhat like the growth rings on a tree trunk. The colour goes right through the rock, caused by iron oxide that was part of the rock formation. Wildly colourful lichens enhance the surface of many boulders. 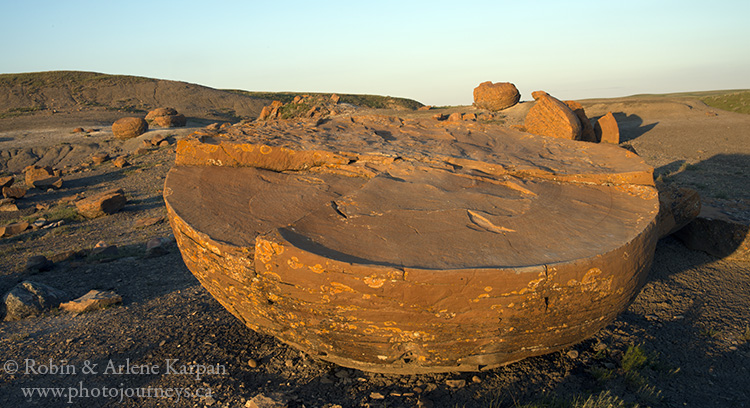 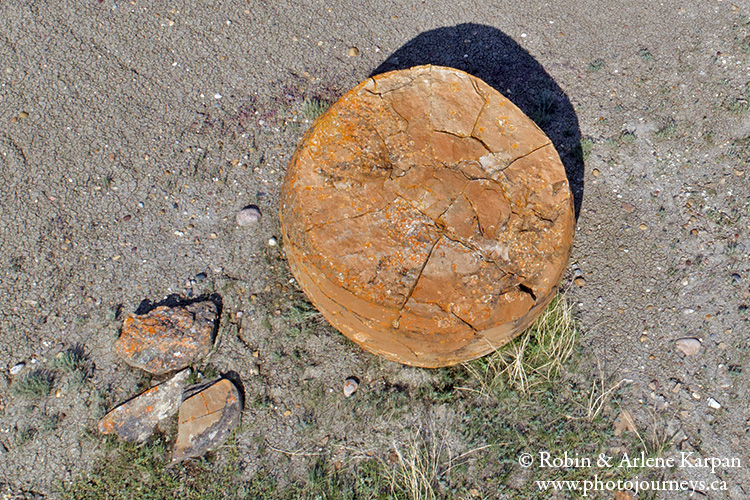 While the unique rocks are the coulee’s main feature, this is also an oasis of relatively undisturbed natural prairie. It’s a great spot for wildflowers such as crocus in the spring and a variety of blooms through the summer like prickly pear and pincushion cactus. A specialty is gumbo evening primrose, which likes to grow on almost bare patches of clay. Grassland birds such as meadowlark, horned lark, and prairie falcon are often around, and common nighthawks deliver their sharp “peent” call as they fly on the lookout for insects. This is also rattlesnake country so be careful stepping over rocks or walking through tall grass.

To get to Red Rock Coulee, head southwest of Medicine Hat on Highway 3 to Seven Persons, then travel south on Highway 887 for about 26 kilometres to where the highway turns east. A sign near the curve directs you to a short access road to the site. Since it is only a little over a half-hour drive away, Medicine Hat is the ideal spot to stay while visiting the coulee. Take it easy driving back to the city at dusk, since deer are often out in full force along the roadways.

See the Tourism Medicine Hat website. For suggestions of other attraction in southeast Alberta, see the Canadian Badlands website. 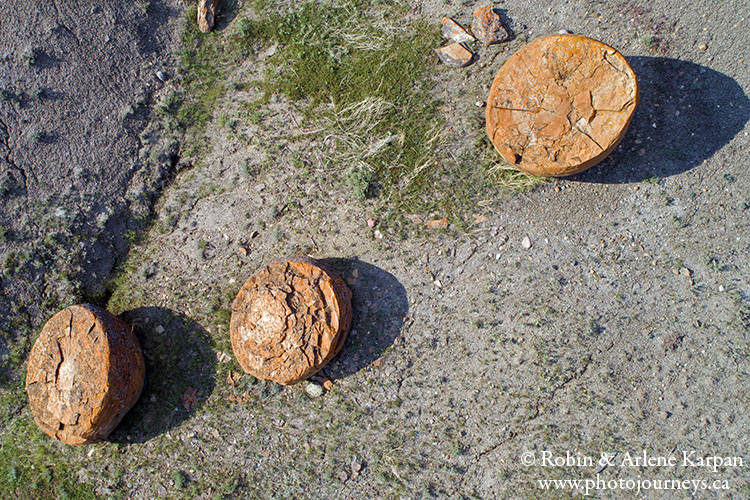 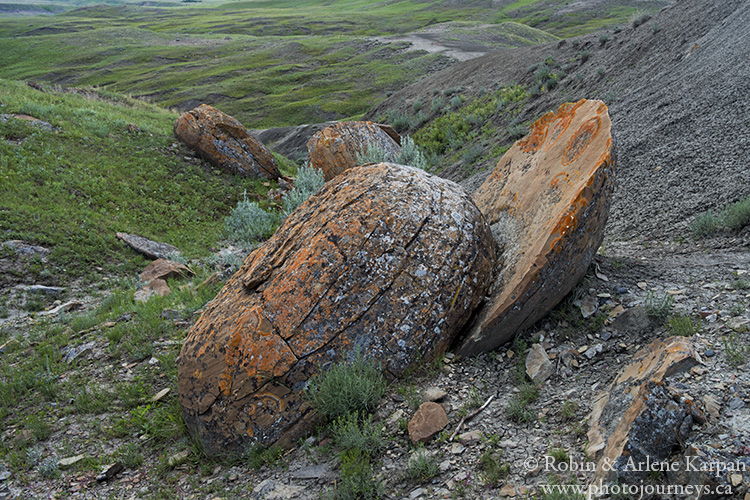 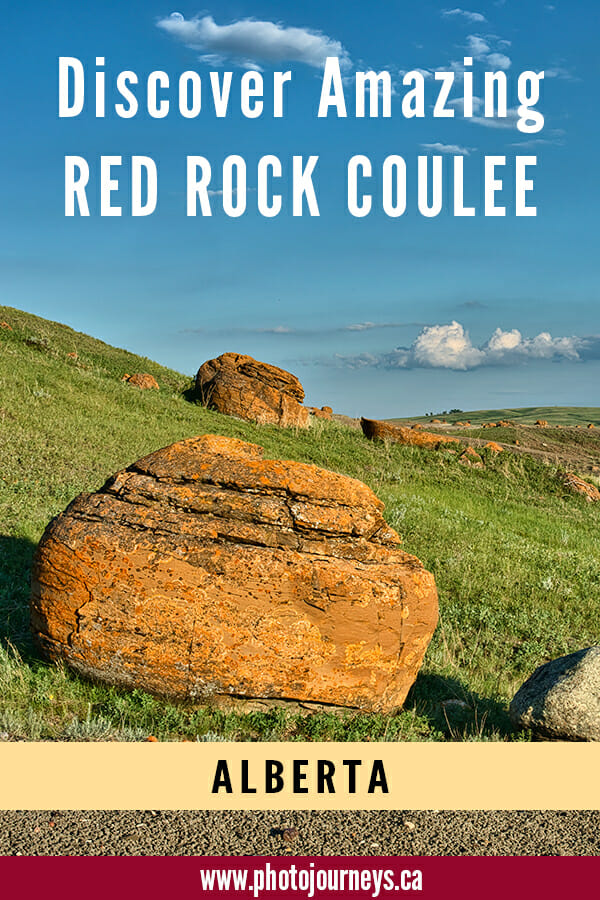