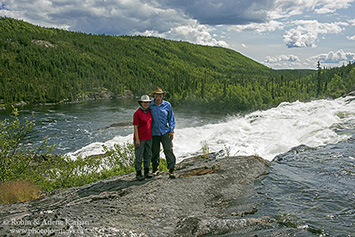 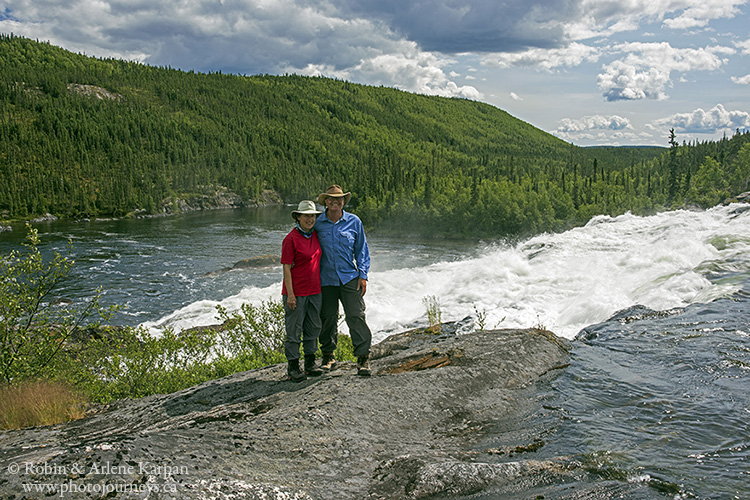 If we had to pick our favourite places in Canada, Saskatchewan’s Hunt Falls would definitely be high on the list. We just got back from a return trip to this special place, and were pleased to see that little had changed since we last visited a few years ago. Despite being an incredibly gorgeous spot, it remains a rare piece of unspoiled wilderness that sees very few visitors because it’s so remote. Yet, surprisingly, it’s not a difficult place to get to. 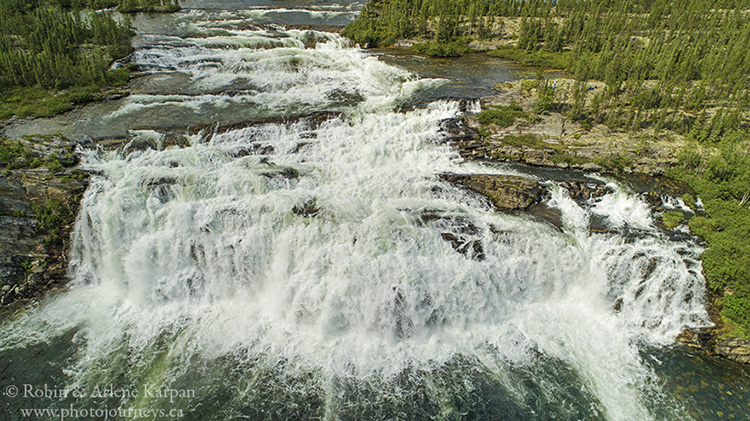 Sitting above the 59th Parallel, between Lake Athabasca and the border with the Northwest Territories, the falls plunge over a fault line along the Grease River. Starting just north of the NWT border, the Grease flows south into Lake Athabasca. Riddled with falls, raging rapids, and canyons, the river drops over 200 metres during the last 60 km. Around Hunt Falls it descends 35 metres in a 3-km stretch, the highlight being the 60-metre wide falls, with a single drop of 15 metres.

The wildest part of the wild river is the long, narrow, frothing canyon just before Lake Athabasca. The Grease is considered one of the more difficult rivers to canoe in northern Saskatchewan, due in large part to this treacherous canyon. Consequently, it sees extremely little canoe traffic. Roads don’t come anywhere near, so the most practical way for most people to visit is by float plane, usually from Stony Rapids, just 40 km or so to the southeast. Float planes can land on Eagle Rock Lake just above the falls, then taxi into a small, protected cove. From there, informal paths lead to the brink of the falls. With a bit of rock scrambling, it’s fairly easy to climb down to the pool below where you look up at the great wall of water.

The Flight to the Falls

We flew in from Athabasca Fishing Lodges, on the south shore of Lake Athabasca across from Grease Bay, where the mighty river empties into the lake. We’re planning to camp at the falls for a few days’ exploring, and are taking a canoe, now securely lashed to the Otter float plane. During the short flight, we see a dramatic transformation in the landscape. Athabasca’s south shore is mostly low-lying to gently rolling, but when we fly across the lake and hit the north shore, it’s like entering another world of massive granite outcroppings, huge hills lining deep canyons, and seemingly endless small lakes. 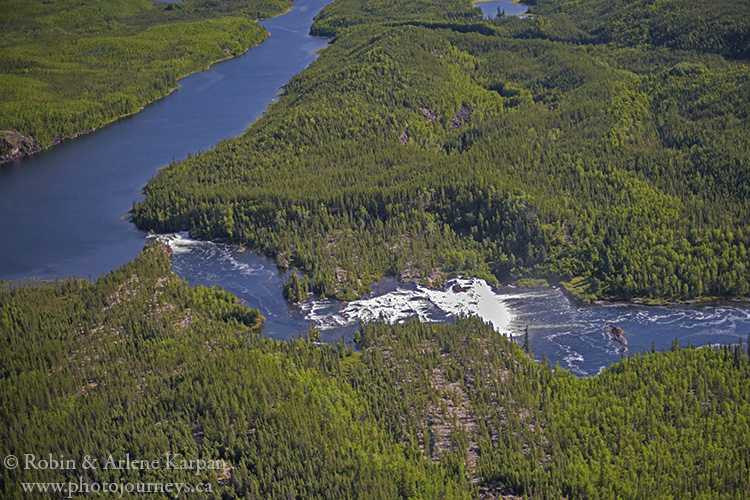 Soon the long stretch of whitewater appears – not only the main falls themselves, but the series of cataracts and rapids above and below. Our pilot, Cliff, swoops over the falls then lines up for a landing on long, narrow Eagle Rock Lake, named for high cliffs where eagles often nest on the ledges.

We camp on an open knoll on the northwest side of the lake, a beautiful spot beneath a rugged cliff. Since we have a canoe, it’s easy to paddle across the narrow lake to explore the falls. Water levels on the lake are very high this summer, so we can’t wait to see what the falls are like. We arrive at the brink after a 15-minute or so walk and, as we were expecting, the falls are not merely plunging but thundering over the drop with a deafening roar. Making our way to the bottom, we look up at the massive wall of water. The last time we were here, it was possible to walk along the shore at the bottom to almost touch the falling cataracts, but not this time. The water is so high that the tiny lake at the bottom rises partway up the cliffs lining the sides of the falls. 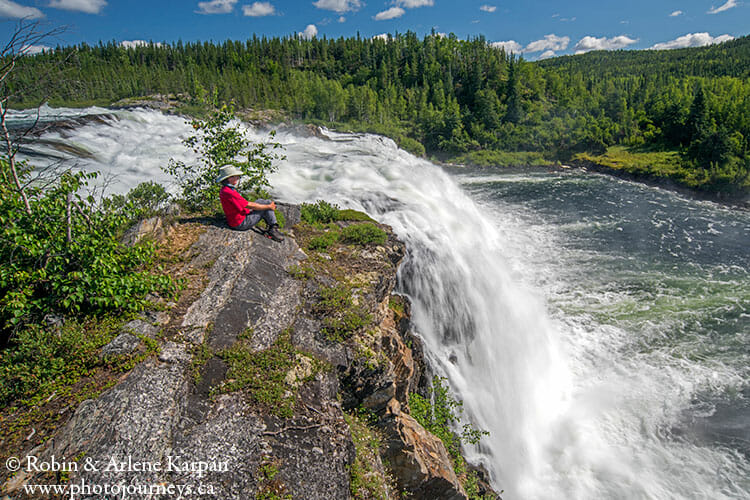 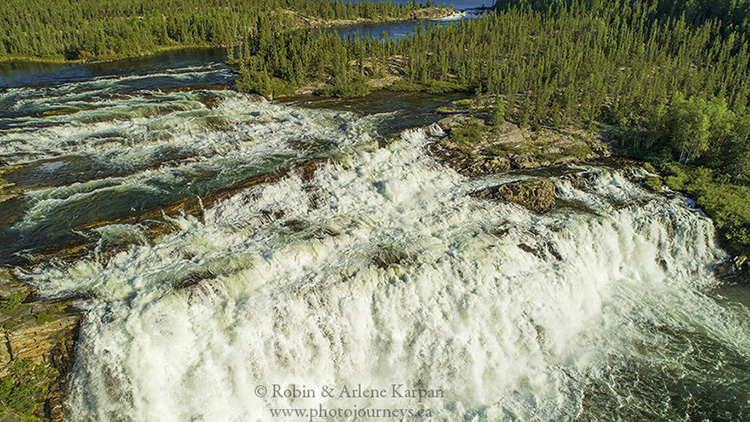 Exploring the Little Visited East Side

One of the benefits of having a canoe is that we can access the east side of the canyon, where even fewer people visit. We’re careful to hug the opposite shore of Eagle Rock Lake, staying well away from the south shore outlet which looks quite innocuous from upstream. The first drop is a fairly small waterfall called McLeod Falls, then a series of tiered drops lead to the edge of Hunt Falls itself. Unlike the west side which has somewhat of a trail, the east side of the falls has absolutely nothing.

We land on the shore just upstream from the first falls and start bushwhacking through the thick forest. Once we climb the ridge overlooking the canyon, the forest opens up, but it’s still a matter of picking our way through. Openings in the tangled forest allow us to get glimpses of the falls – incredible views that few people ever see. A steep scramble down the side of the ridge takes us onto the rocky outcroppings on the east side of the falls. Just below here is a unique mist meadow where the constant mist from the falls has created an almost tropical-looking piece of greenery. 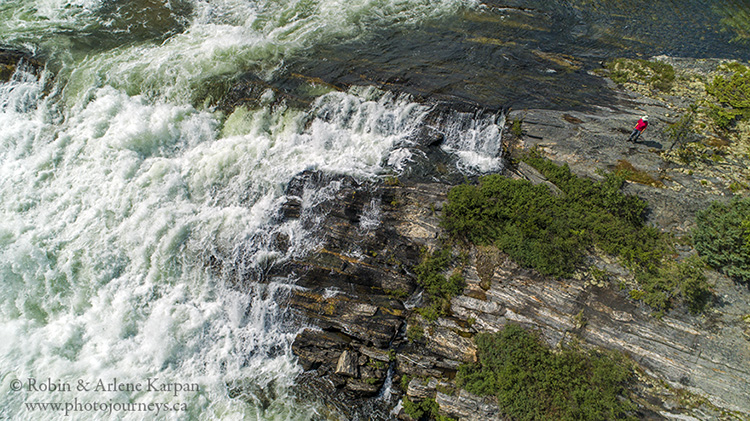 Hunt Falls may be the largest waterfall in Saskatchewan, but it’s not just size that makes this place special. It’s the pristine setting, the isolation, the breathtaking views wherever you turn. Even the fishing was so good that we could be picky – keeping only a fish that was just the right size for supper.

Above all, this place is a photographer’s dream. For more details on photographing Hunt Falls as well as other photogenic spots, see our book Photographer’s Guide to Saskatchewan. 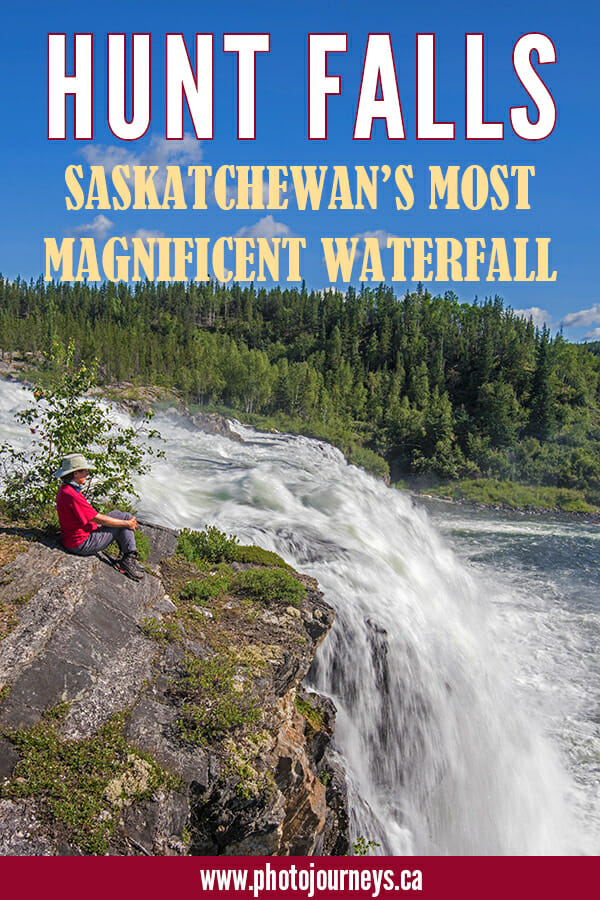 4 thoughts on “Return to Hunt Falls”