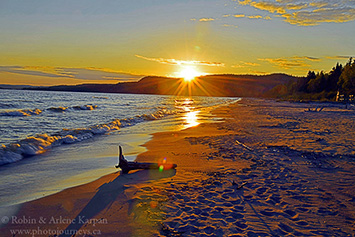 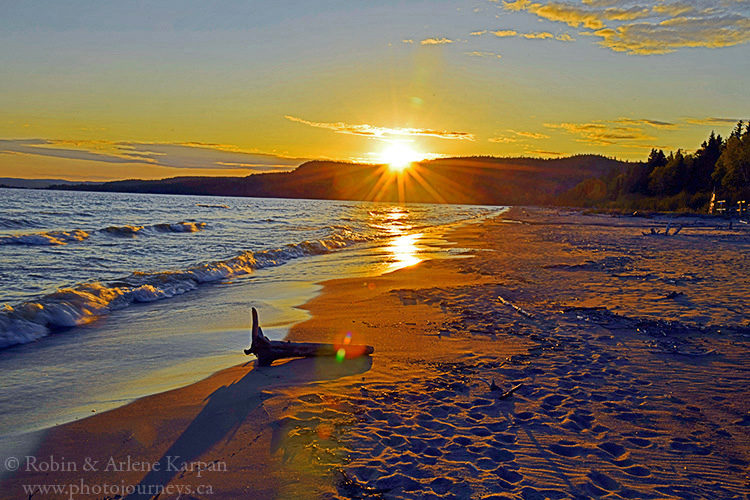 The north shore of Lake Superior abounds in photogenic places, with Neys Provincial Park being among the best spots to spend a night or two, especially if you’re a photographer. The location couldn’t be more convenient – just off the Trans Canada Highway on the rugged Coldwell Peninsula, and right on one of the finest Lake Superior beaches. This is very much a natural, away-from-it-all park. The nearest major communities are Marathon, 17 km east, and Terrace Bay, 45 km west. 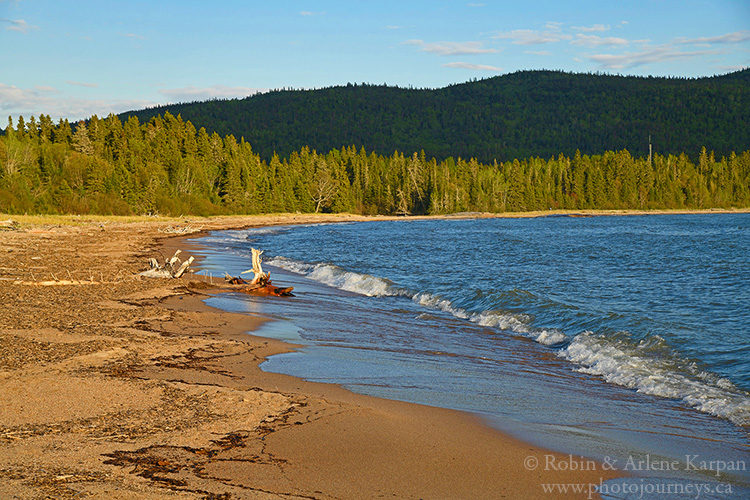 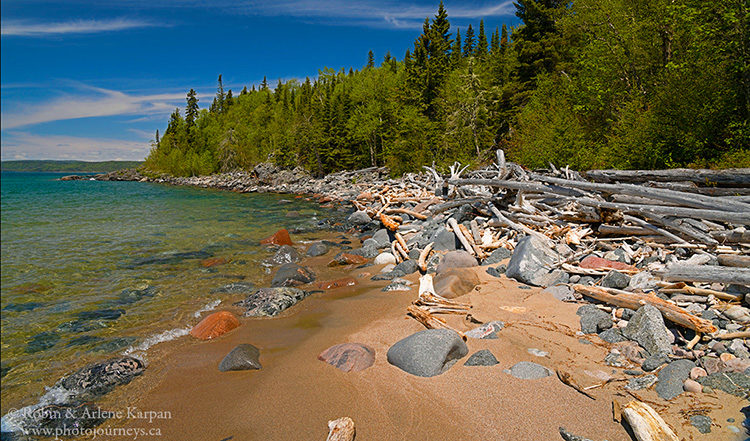 The park’s campground has 144 sites, plus a cabin to rent. Try to snag a site right next to the beach, although most sites are fairly close to the lakeshore. Evenings were the highlight; we could relax in our campsite and watch the sky, then walk a few steps to the beach to catch just the right light for photography. 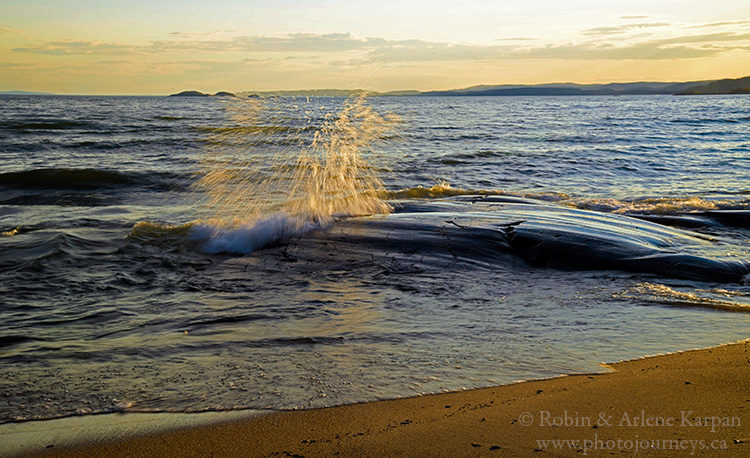 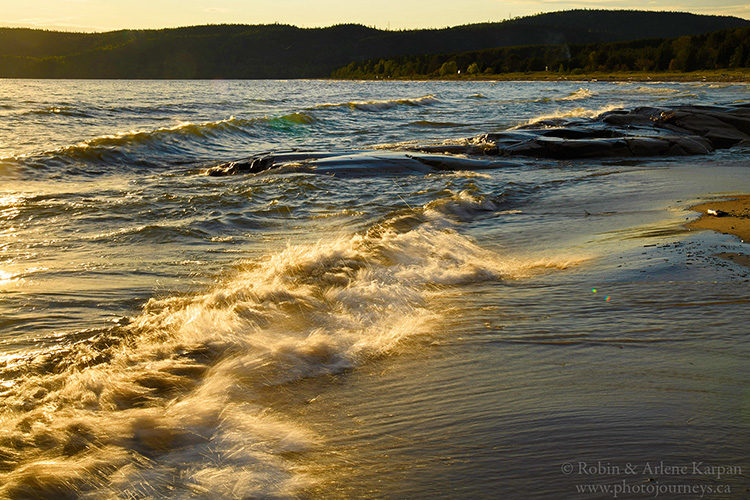 While the 2-km long sandy beach, strewn with driftwood, was the most obvious and attractive part of the shore, massive rocky outcroppings with crashing waves, pebbly beaches with multi-hued stones, or the outlet of the Little Pic River were all only a short walk away. The artistic potential of the area was recognized almost 100 years ago. Group of Seven artist, Lawren Harris, came here to paint in the 1920s and created one of his most famous works – Pic Island. 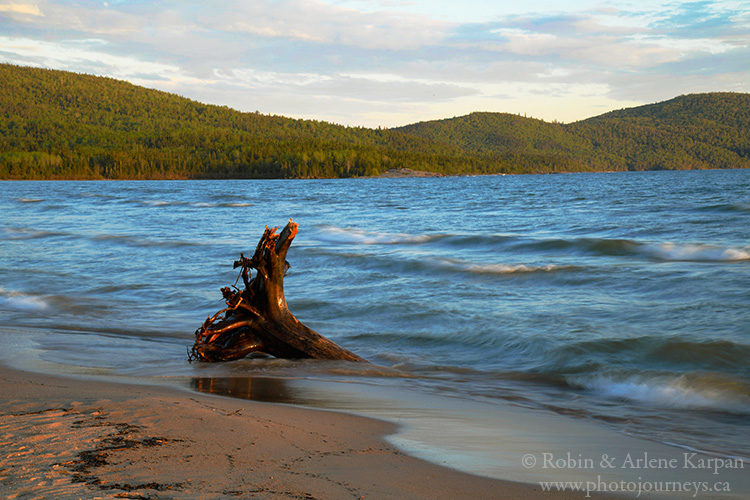 The short hiking trails are excellent for experiencing different aspects of the terrain. The 1.3-km Dune Trail is an easy interpretive trail that focuses on the delicate vegetation of the sand dune ecosystem. The 1.6-km Lookout Trail heads up into the rocky highlands with views over the lake. If you prefer something a bit more challenging, there are different options to hike to the Pic Island Overlook to see the spot that inspired Lawren Harris. 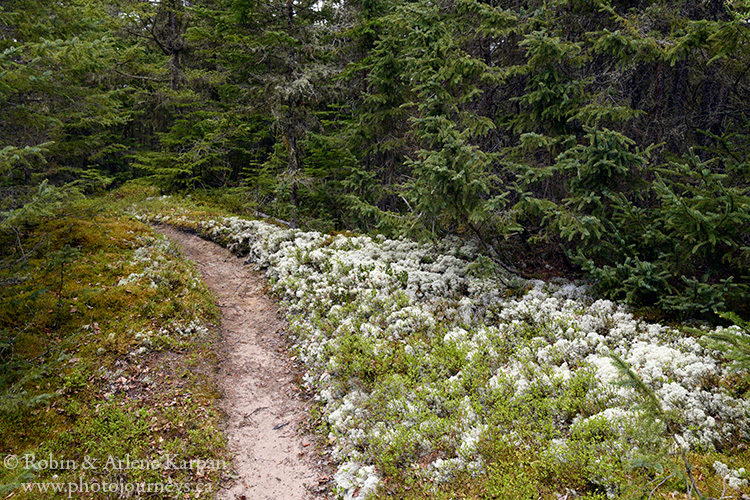 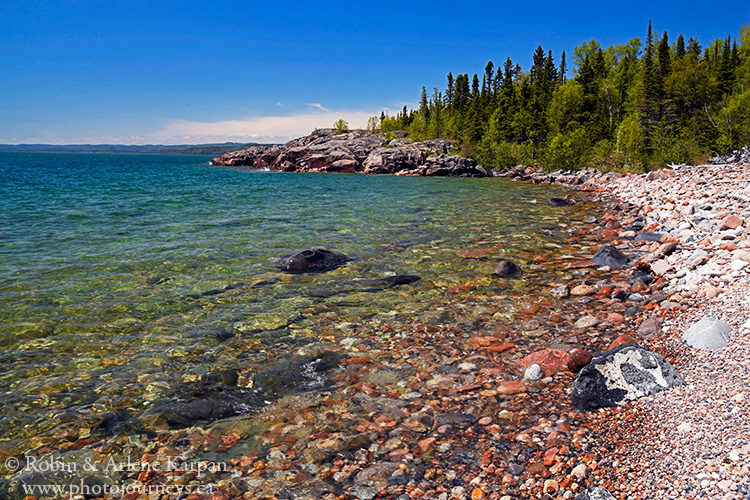 A popular walk is the Point Trail, an easy 1-km route (2-km return) starting at Prisoner’s Cove, fairly close to the campground. It follows the shore, goes through a short section of forest, then ends at the huge rocky outcropping at Prisoner Point. 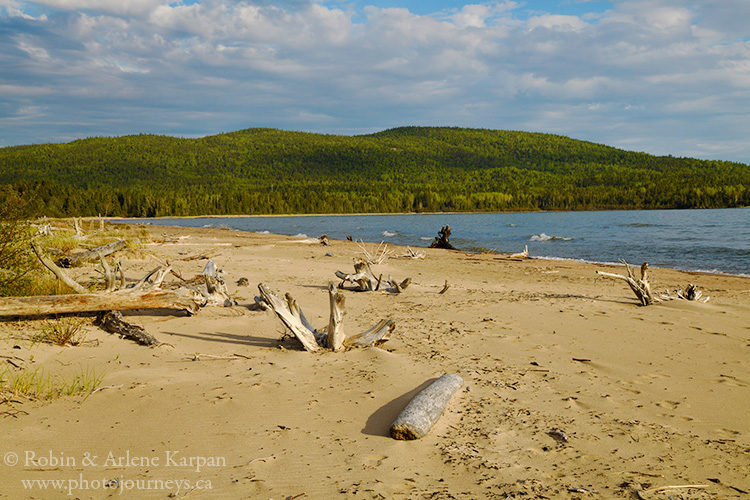 So what’s with all the prisoner stuff? During World War II, this was site of a Prisoner-of-War camp, where mostly high-ranking German soldiers were held. Britain was running out of space to house captured German prisoners, and there was a concern that if they escaped, they could compromise British defences. So sending them to a remote part of Canada eliminated worries of escapes. 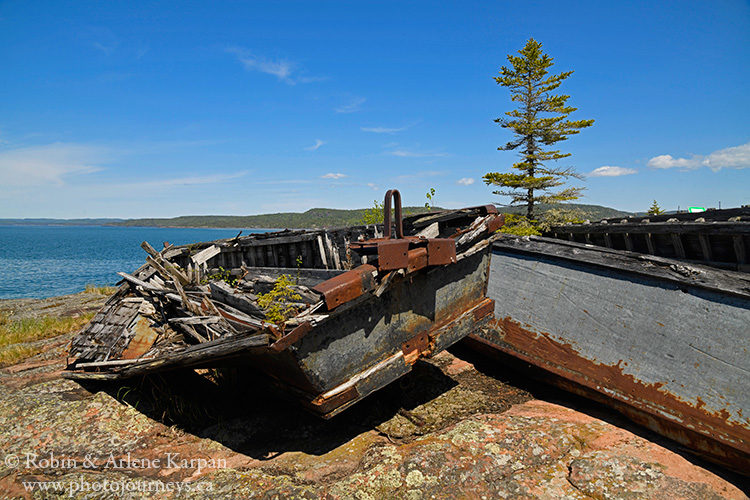 The prisoners were put to work in a logging camp, and at Prisoners Point we can see remains of some of the boats used for transport in those days. The prisoners were sent back to Germany at the end of the war, but apparently some were so impressed by how well they were treated during their internment that they decided to immigrate back to Canada. 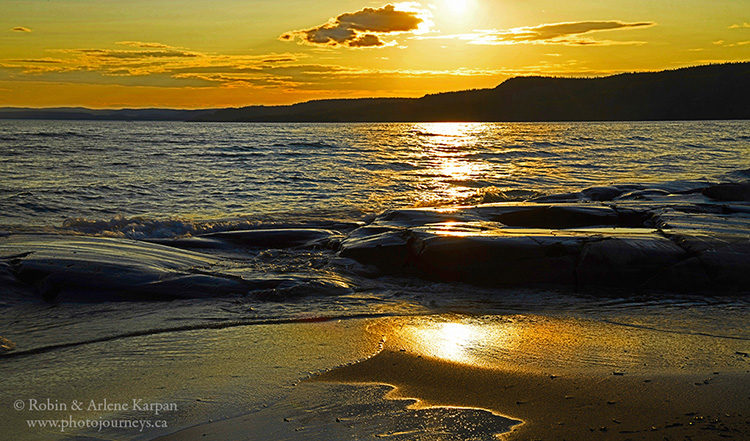 Prisoners Point is also the start of the 2.5 km (5 km return) Under the Volcano Trail along the Lake Superior shore. The intriguing name comes from the area’s impressive geological history, with 2.6 billion-year-old rocks, volcanic eruptions in the Neys neighbourhood a billion or so years ago, and the gradual cooling of the magma from under the volcano into the coarse-grained igneous rock that dominates the landscape today. We can also see remnants from more recent geological history, a mere 10,000 years ago, when glaciers moved across the rock surface, leaving striations, or long, well-defined parallel gouges. 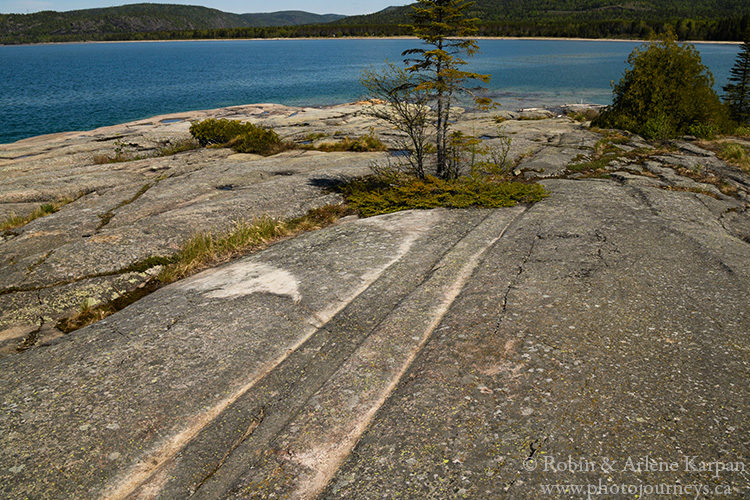 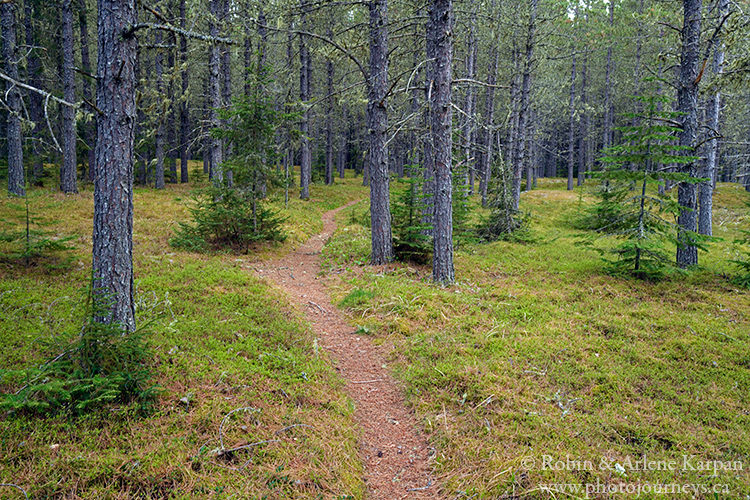 Most impressive is the stunning beauty of the landscape. The trail runs through the forest much of the way, with access points to the rocky shore, and small, picture-perfect bays with sandy beaches, driftwood, and reddish pebbles. It’s also in these shallow bays where we see the turquoise-tinged water that’s famous in many parts of Lake Superior. At first you might think that the crystal clear water seems like something from the Caribbean – that is, until you dip your toe in.

Check out the Neys Provincial Park website for more information. 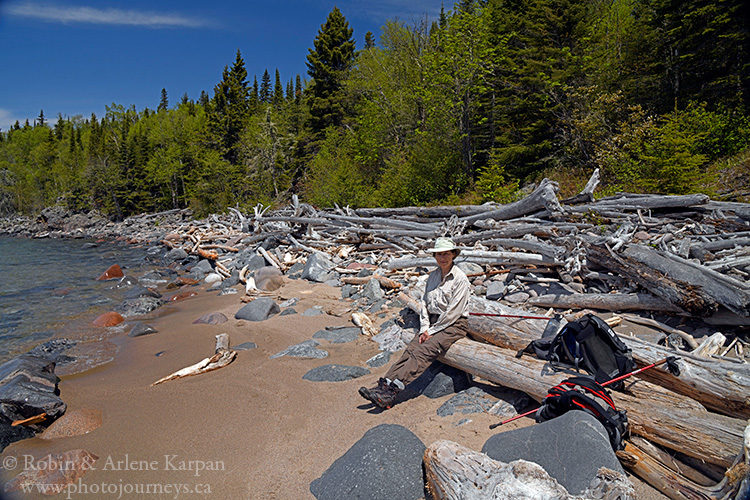 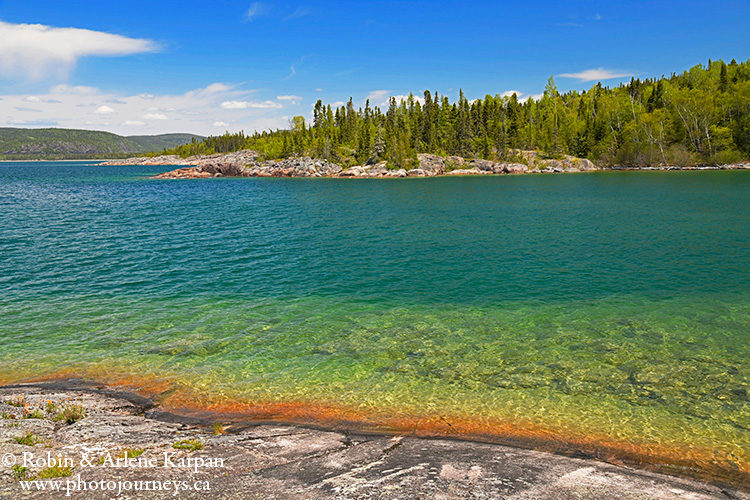 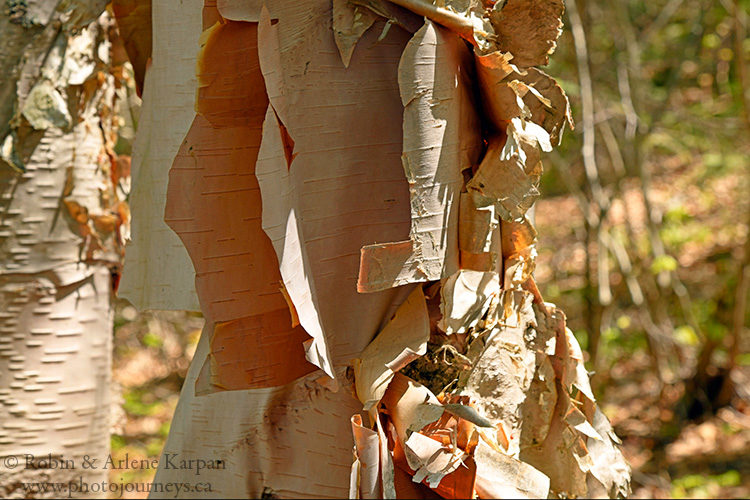 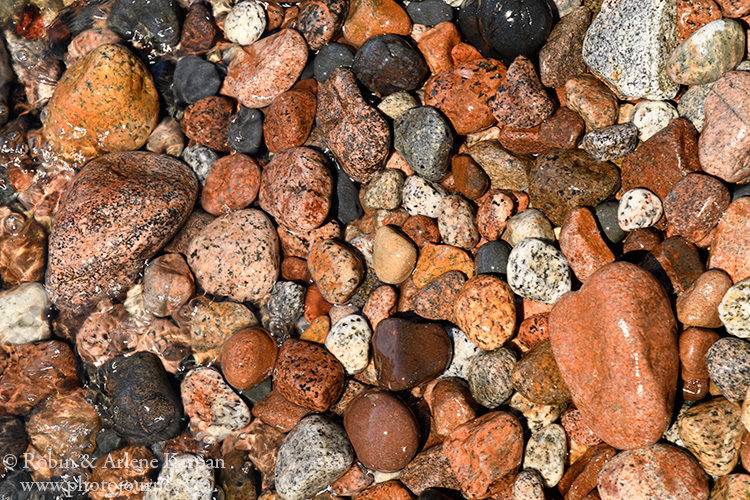 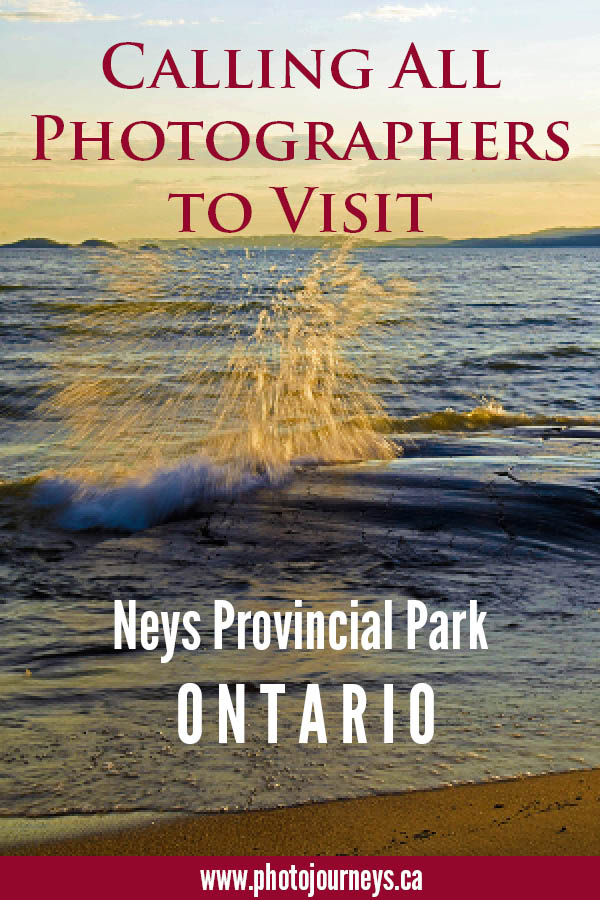