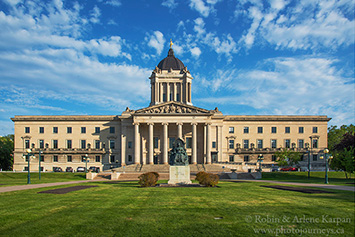 It was an adventure the likes of the Da Vinci Code, complete with ancient symbols, hidden clues, and secret society rituals. But with one big difference. This code-busting escapade was for real.

The unlikely setting was the Manitoba Legislative Assembly building in Winnipeg, its dome topped by the brilliant statue of the Greek god Hermes, commonly called the Golden Boy. It was on the front steps of the stately building that we met Don Finkbeiner of Heartland International Travel and Tours. Right from the start it was apparent that this wasn’t going to be your run-of-the-mill historical tour.

“This masquerades as a house of government,” said Don. “It’s actually a temple in disguise. Not just any temple; it’s modelled after King Solomon’s Temple.”

Our heads never stopped spinning for the next hour and a half, as he ushered us through a beguiling world of ancient Greek, Roman and Egyptian gods, cosmology, numerology, alchemy, and the occult, liberally sprinkled with pagan, Christian, and Masonic imagery.

On the surface, this is simply a fine government building with elaborate decorations. It was architectural historian Dr. Frank Albo who unlocked its secrets after ten years of painstaking research. It began when Frank, then a student at the University of Winnipeg, wondered why the legislature had statues of Egyptian sphinx on the roof. Looking further, he found the building packed with mysterious symbols that aren’t at first obvious.

The building was the brainchild of Liverpool architect Frank Worthington Simon. He was awarded the commission in 1912 by a committee that included Manitoba’s premier Rodmond Roblin and some senior members of government who were Freemasons, a benevolent society big on symbolism and secret rituals. Simon not only incorporated Masonic designs but added complex layers of ancient, pagan, and religious symbols, all intended for the betterment of society. His modus operandi was that if you want to hide something, hide it in plain view.

When Don learned of Frank Albo’s findings, he was immediately hooked. They teamed up to bring this intriguing story to the public through specialized Hermetic Code tours.

As we entered the main hall of the building, we came face to face with two large bronze bison statues, symbolic of Manitoba. Or are they? Don explained that ancient temples always had a room of protection guarded by two large horned bulls to ward off evil. Use bison and most people don’t give it a second thought, but the guardians still fulfill their protective role.

Other symbols to battle evil adorn the room, including the face of Medusa with her hair made of snakes; just one glance at her would send evil packing. Eight cattle skulls form part of the decorations. Cattle skulls in a prairie setting might seem perfectly normal, but to Simon, this wasn’t a western motif. Back in the day when cattle sacrifices were in vogue, their skulls were hung as protective symbols.

The extensive use of numbers as symbols of power is mind-boggling. The main hall is square, measuring 66 feet, six inches on each side. While 666 is associated with the Devil in the Bible, it also has a wider and more positive significance. To the Egyptians and Babylonians, 666 was the number of the sun-god, who ruled the 36 constellations in the sky. Add up the numbers from 1 to 36 and we get 666. Wearing an amulet with 666 on it was a way of covering your bases and currying favour from all the gods.

Number 13 is everywhere, from 13-foot-long bison to the grand staircase with three sets of 13 steps, 13 stones on the entrance archway, or 13 lights in every hallway. On one level, 13 represents Christ and the 12 Apostles, but it is also part of the powerful Fibonacci sequence – 3,5,8,13, etc., where any number is the sum of the previous two numbers. Divide any number by the number before it and we get an average of 1.618, known as the golden ratio, the most aesthetically pleasing proportion found in nature and used extensively in architecture. Groupings of fives and eights loom large throughout the building as well.

The Altar and Sanctuary

Don led us up the grand staircase, across the mosaic floor patterned after the ground floor of Solomon’s Temple, to the Rotunda (13 feet across, by the way). Here we looked down to the lower level to see the Pool of the Black Star, representing the second essential part of a temple — the sanctuary and altar.

Don referred us to an old guidebook to the building from 1925 that talked about sacrifices in a setting such as this in the ancient world, complete with an altar, white-robed worshippers, a victim, a curved knife, and blood trickling through the veins of marble. Heady stuff for a guide to a building where elected lawmakers work.

“Who came along 2,000 years ago and put an end to sacrifices in temples?” asked Don rhetorically. “It was Christ, so maybe we should see if there are any representations of Christ hidden in plain view.” Nothing was obvious, but by now we were beyond being surprised.

At the back of the rotunda, a huge mural portrays the First World War, which was raging during construction. It ostensibly shows the aftermath of a battle, with a badly wounded soldier being helped along by his comrades.

Simon hired muralist Frank Brangwyn from Brussels, who studied in the same Paris art school as Simon and was known for embedding Christian imagery in his paintings.

Once Don pointed out the details, it became obvious that the painting also depicts the Passion of Christ. The “wounded soldier” even has a nail hole in one hand. What looks like the long barrel of an artillery piece is also the pole of the cross. Hidden near the top of the painting is a representation of the Madonna and Child.

The Holy of Holies

The most important room in Solomon’s Temple was the Holy of Holies, built to house the Ark of the Covenant containing tablets with the Ten Commandments. Only the high priest could enter and only on special occasions. Don led us to the door of a little-used room off to the side, its entrance framed by two pillars using a design from Solomon’s Temple. A security guard unlocked the door and we peered into the reception room of the Manitoba government’s most important figure, its “high priest” if you will— the lieutenant-governor.

The fairly small though ornate square room measures 24 by 24 feet. The Holy of Holies was 20 by 20 cubits according to the Bible. Conversions are difficult because a cubit refers to the distance from a person’s elbow to the fingertips, so measurements can vary widely. However, the Masons used 14.4 inches as one of their conversions, so 20 cubits is 24 feet.

So far so good. The room matches the size of the Holy of Holies, but surely this improbable story will fall apart after this. We can clearly see the entire room. It would be quite a stretch to suggest that the Ark of the Covenant could be represented here. The Ark was said to be hidden behind a veil of blue, purple, and scarlet. This room does have blue curtains, which seemed promising at first, yet behind them we see only a window.

“That’s still where we have to look,” explained Don with a grin, “but outside where it’s hidden in plain view.”

Quest for the Lost Ark

We headed outside where Don described the many intricate designs and statues covering the building. The four elements of earth, air, fire, and water are represented. The front columns were built in exact proportion to the size of Hermes, using the golden ratio.

One statue is of General James Wolfe who whooped the French on the Plains of Abraham. A significant historical character, yet what is the connection with Manitoba? It turns out that his place of prominence has more to do with him being a notable Freemason – one of the earliest in Canada.

Then there are those curious Egyptian sphinxes that first set Frank Albo on his ten-year quest. It would be easy to dismiss them as mere decoration, since Egyptian motifs were all the rage a century ago. But when Frank went on the roof for a closer view, he saw the hieroglyphics on the lower part of the sphinx, translated as “The everlasting manifestation of the sun god Re, the good god who gives life”. The hieroglyphics aren’t visible from the ground, so they would have no purpose as decoration.

Finally we came to the east side of the building, where Don pointed to the sculpture just above the lieutenant-governor’s window. It portrays a box, usually described as a war chest, guarded by two warriors. Frank once crawled on the roof to measure the box, almost falling off in the process. He found that its proportions exactly match the Ark of the Covenant.

So why Winnipeg of all places for such an extraordinary building? In the early 20th century, this was the fastest growing city in North America, a boom town on steroids where everything was possible and only the best would do.

Winnipeg had more millionaires per capita than New York City and the commodities market was outselling the more famous exchange in Chicago. Winnipeg was poised to take its place among the world’s great cities, so a new legislative building would have to be a showpiece.

Leaving Nothing to Chance

Simon’s meticulousness in leaving nothing to chance in construction extended to public ceremonies as well. While the god on the legislature’s dome was called Hermes by the Greeks, the Romans knew him as Mercury and even named a planet after him. Lined up directly below the centre of the dome where Hermes, or Mercury, stands is the eight-pointed black star on the lower level. To the Babylonians, this was the Star of Ishtar, a fertility symbol associated with the planet Venus.

The ceremony to lay the northeast cornerstone, considered the birth of a building to Masons, took place at 5:30 on June 3, 1914, precisely when the planets of Venus and Mercury aligned over Winnipeg. The building’s official opening on July 15, 1920 was no accident either, planned for when the two planets again aligned over the booming city, this time with its brand spanking new legislative building, and of course, its ancient temple.

We’ll never look at a building the same way again. 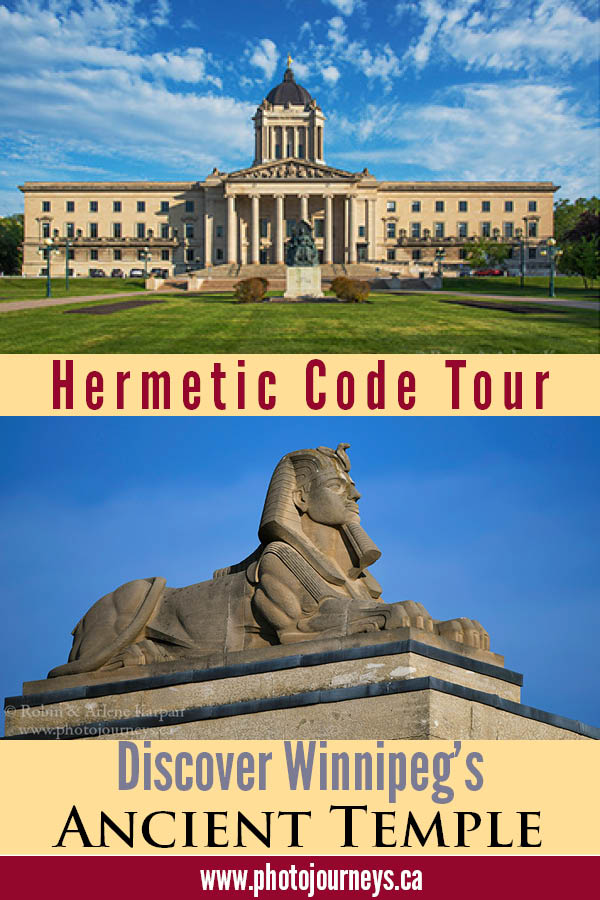