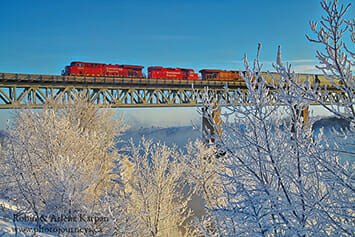 The riverbank in Saskatoon, Saskatchewan is among our favourite places for winter photography. But when we get bone-chilling temperatures in the minus 30s and 40s, as we had recently, it gets even better! Even in the coldest stretch of winter, the South Saskatchewan River has open water as it flows through downtown Saskatoon. The cold air mixing with the relatively warm water produces great clouds of steam rising from the river, offering us some wonderful photo possibilities.

Sometimes the fog is so thick that even on a clear day the sun has a hard time shining through. When the sun is low in the sky, such as just after sunrise or just before sunset, we often get a warm golden glow. The moisture from the steam also means that the trees and other vegetation close to the river are often coated in thick frost.

West Side of the River

Almost anywhere along the river is worth exploring, which is fortunately easy to do with the Meewasin Valley Trails running along both sides of the valley. But if we had to pick our favourite spot, it would be the next to the weir along Spadina Crescent, which conveniently has a parking lot. As water flows over the 3.4 metre drop on the weir, there tends to be more mist in the air than along other stretches of the river, and consequently more frost forming on the trees.

Walking along the Meewasin Trail in both directions from the weir parking lot, and especially towards downtown, can be magical when we get super cold weather. The best time to come is early morning just after sunrise, when we get backlighting through the fog and trees. Although every day is different, there also tends to be less wind early in the morning. As the wind picks up later in the day, it often blows much of the frost off the trees.

Another feature at the weir parking lot is the CP Rail Bridge, which also has a pedestrian walkway. This is an excellent place to go if you want a vantage point for photos with a bit of altitude. But the bridge itself makes for an interesting photo subject. On an extremely cold day the steam on the river could be so thick that you can’t see the other bank. The bridge sometimes has a spooky look, as if it disappears into the Twilight Zone.

Another prime spot along Spadina Crescent is the area around the Nutrien Wonderhub Children’s Museum, which Saskatonians also know as site of the former Mendel Art Gallery. There’s a convenient parking lot here as well, plus it’s a short walk from the weir. Part of the Meewasin Trail goes right beside the river, with a nice pedestrian overlook on the water’s edge.

From this spot, you can not only photograph along the river, but you might discover frost-coated vegetation, and perhaps even goldeneye ducks. These hardy ducks somehow didn’t get the migration message, but instead decided that Saskatoon is a great place to spend the entire winter. Also watch for woodpeckers and other familiar winter birds as you walk along the trails.

You can’t miss the Prairie Lily tour boat that is moored for the winter beside the riverbank in open water. The boat can make an intriguing photo subject as its sits in the water engulfed in thick fog and frost.

From here it’s a short walk to the University Bridge. The pedestrian walkway on the south side of the bridge provides vantage points to photograph the river with parts of downtown as a backdrop. It’s a prime spot to photograph the sun setting over Saskatoon’s most recognizable landmark, the Delta Bessborough Hotel.

East Side of the River

Our favourite area is along Saskatchewan Crescent and Cosmopolitan Park, between the University and Broadway Bridges. Since the east bank is quite a bit higher than the west bank, there are sweeping views over the river and downtown, and from the sidewalk along Saskatchewan Crescent, especially where there are breaks in the trees. Another option is to frame part of the photo with frosty branches in lower parts of the park.

Prime times are early morning when the low sun shines on the Bessborough and other buildings on the river’s edge, or sunset when backlighting often gives steam on the river a golden glow. This vantage point is also a great spot to see the full moon set over downtown.

These are only a few of the many possibilities to photograph along the riverbank. The light conditions could vary widely from one day to the next, so it’s best to explore different parts of the valley and find other vantage points that might be just as rewarding. 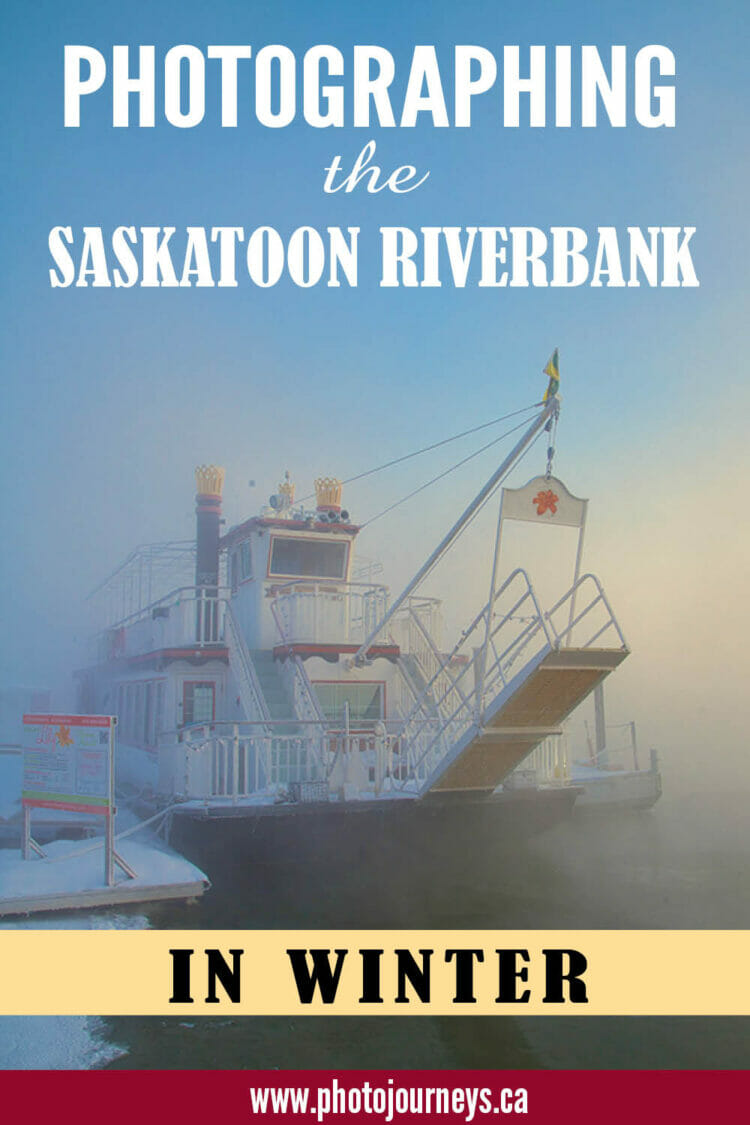 2 thoughts on “Photographing the Saskatoon Riverbank in Winter”