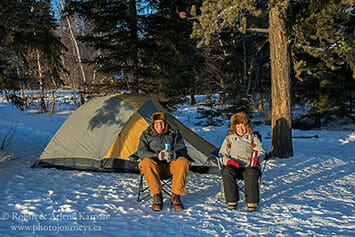 What if we told you that you could get a beautiful lakeside campsite at a bargain-basement price and that there wouldn’t be a mosquito anywhere in sight? That’s exactly what we found when we went winter camping in Saskatchewan’s Prince Albert National Park. Camping in winter is a completely different experience from other times of year, with a lot of advantages in addition to no bugs. You also don’t have to bother with ice for your cooler. And because there are fewer people around, observing pandemic protocols such as social distancing is much easier.

The regular campgrounds in Prince Albert National Park are closed for the winter. Instead, the park has designated two picnic sites on the shore of Waskesiu Lake as drive-in campsites. One is Paignton Beach along the Narrows Road. The other, where we stayed, is on the opposite side of the lake at Birch Bay along the Kingsmere Road. Register for camping at the park Visitor Centre in Waskesiu.

Camping fees are a bargain at $5.01 per person. That’s right – not five bucks, but an additional one cent on top of that. It seems that every penny counts these days, even when we no longer have pennies.

What really made our stay comfortable was the closed-in picnic shelter at Birch Bay (Paignton Beach has one as well), complete with a large wood-burning stove and plenty of firewood. Because of Covid-19, the park recommends that different camping groups do not use the shelter at the same time. As it turned out, this wasn’t an issue during our mid-week visit since we were the only ones camping there. If you go on the weekend, and especially if the weather is mild, expect to find a lot more people around.

Exploring and Photographing the Park

Some of the top winter activities in the park include snowshoeing and cross-country skiing on the many trails. Depending on the depth of snow, it’s also possible to walk some of the trails.

The photography possibilities are excellent, especially with the park’s decent snow cover this winter. We spent much of our time simply wandering around to see what we could find to photograph. At Birch Bay we could watch both sunrise and sunset over the lake, and both decided to put on a show. This time of year has definite advantages for photographers. We can sleep in, have breakfast, and be sipping our second cup of coffee while preparing to photograph the sunrise.

The park is known for its wildlife, and winter doesn’t disappoint. Common critters such as white-tailed deer and Canada jays, also known as whiskey jacks, abound. The latter are so gregarious that you have to keep a close eye on your grub at picnic sites. Foxes are especially photogenic with their thick, lustrous coats against the white snow. They might be anywhere, but along the Narrows Road is often a good bet.

We found bull elk with magnificent antlers browsing on bushes and relaxing in the sun. They too could be anywhere, but a favourite hangout is often just south of the golf course or in the clearing along the road south of the Waskesiu townsite. Wolves are definitely around but are more elusive, plus we heard reports of people seeing lynx close to where we camped. Sometimes it’s possible to find otters near the Narrows on Waskesiu Lake.

A wildlife highlight for us this trip was finally photographing a pileated woodpecker. Sporting an elaborate flaming red hairdo, this is North America’s largest woodpecker – almost the size of a crow. We have seen them before – just a quick fleeting glimpse, or when hidden behind branches. But this time we found one that not only cooperated for a photo but was considerate enough to pose in nice light.

Of course, winter camping has a few challenges. For starters, getting tent pegs in the ground isn’t easy. The main concern that people worry about, however, is getting cold at night, especially if temperatures plummet and a strong wind howls across the frozen lake. But because these are drive-in campsites, we can bring all the extra sleeping bags and blankets we want. So the best is to always err on the side of having too many warm clothes and sleeping gear rather than not enough.

Keeping food from freezing is another concern. We kept food susceptible to freezing in an insulated cooler in our car and wrapped extra coats and blankets around it. Another option is to choose foods that won’t be affected by freezing, such as frozen or dried vegetables rather than fresh. On the positive side, keeping those T-bone steaks cool until tomorrow evening’s barbecue is no problem at all. 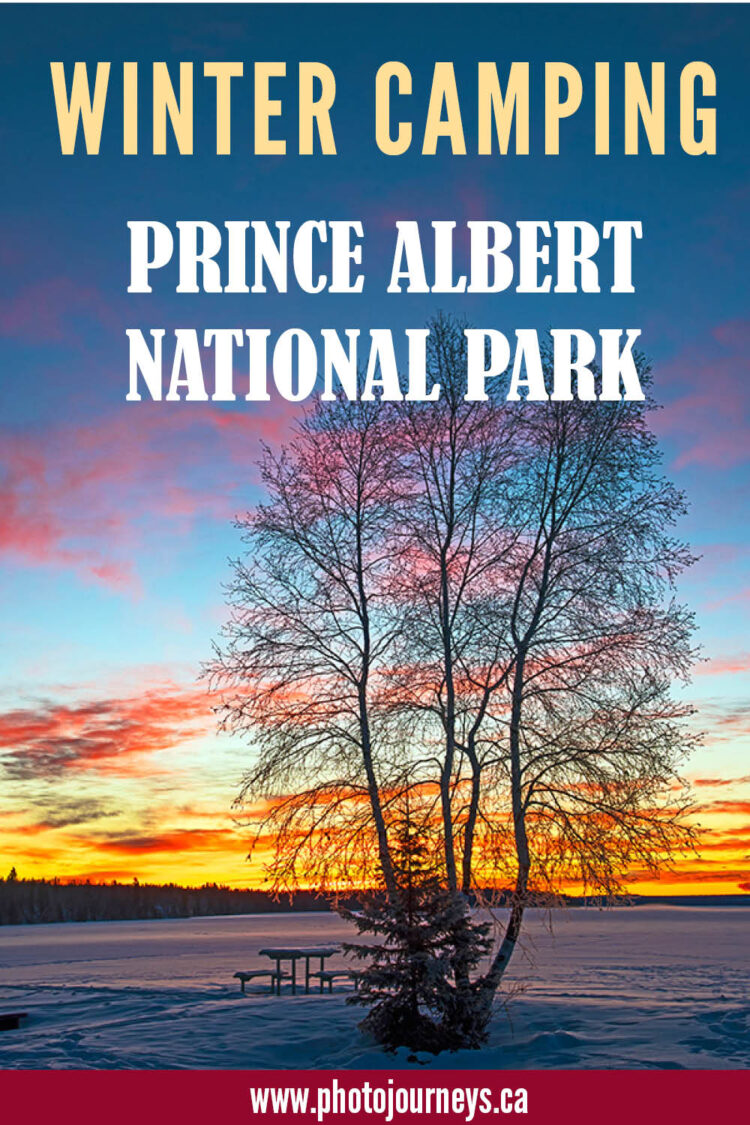