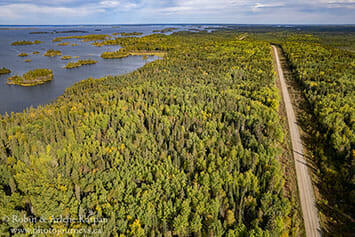 The drive along the east and south shore of Amisk Lake in northeastern Saskatchewan is only about 50 km long, but it packs in a lot of scenery and history in that short distance. Adding to the diversity is that the north end of the lake is hard rock Canadian Shield, while the south end is characterized by limestone. A wonderful drive anytime, our favourite time is fall when autumn colours add some extra pizzazz to the landscape, plus few people are around.

Hwy 167 starts at Creighton, the terminus for the Hanson Lake Road (Hwy 106), and right next to Flin Flon, Manitoba, immediately across the border. The first 18 km of road, as far as Denare Beach, is paved as it winds through forest and rocky outcroppings, and beside streams, wetlands, and muskeg pools.

The first entrance to the resort village of Denare Beach heads to the provincial campground, situated near a protected bay on Amisk Lake, and a boat launch. Almost next to the campground, Rocky View Lodge sits on a hill overlooking the bay. A stop we usually make along this road is at Precambrian Wild Rice, where northern Saskatchewan’s most famous agricultural crop is processed. The small attached shop has wild rice for sale at prices that are lot better than in stores farther south.

Another road leads to the heart of Denare Beach with its sandy beach, picnic grounds, fishing lodges, cottages, boat docks, and shops. A must-see is the Northern Gateway Museum, featuring the extensive collection of artifacts that amateur archaeologist Harry Moody collected over many years, with displays on local history, geology, mining, and trapping. Leather wear including embroidery and beadwork done by First Nations artisans also features prominently in the exhibits.

Of particular note is the collection of birchbark bitings by famous local artist, Angelique Merasty. In this highly specialized art form, birchbark is folded and bitten to form intricate designs. During one of our earliest trips to Denare Beach many years ago, we canoed out to the island where Angelique and her husband Bill lived, and bought a birchbark biting directly from the artist.

The pavement ends just outside Denare Beach, but the good all-weather gravel road continues winding south for another 30 km through hilly forest country to the south end of Amisk Lake and the Sturgeon-Weir River. Used mainly for recreation today, this road originated with much grander plans. In the days before the Hanson Lake Road was built, Creighton and Flin Flon lobbied the Saskatchewan government for a road to the south. During the 1930s and 1940s, construction proceeded slowly as far south as the Sturgeon-Weir River. The plan was that it would meet up with Hwy 35 being built north of Nipawin. However, the challenges of road building in this rugged country caused the government to rethink the project. Then the completion of Manitoba’s Hwy 10 to Flin Flon in 1951 effectively killed the idea. An all-Saskatchewan route would have to wait for the completion of the Hanson Lake Road in 1965.

After travelling about 15 km from the end of pavement outside Denare Beach, watch for a minor road to the east. There are no signs. A few metres down this trail you come to a dead end near the remains of a cement structure that was once site of a fire tower. From here, follow the informal trail into the forest where you almost immediately come across the remarkable limestone crevices.

The walls of some of the crevices are so straight and so precise that it’s easy to imagine that they were cut by some gigantic machine. But these uncommon formations are natural; they’re actually remnants of an ancient sea. Some 450 million years ago, coral reefs on the floor of a warm sea were gradually transformed into layers of limestone. Repeated freezing and thawing over the centuries has widened the cracks in the limestone, creating a labyrinth of crevices and caverns. Some of the chasms are up to 12 metres deep, and even in mid-summer you might see snow or ice at the bottom.

The crevices cover an extensive area so it’s a great place to wander around. Be especially careful of your footing. This isn’t an “official” tourist attraction, so there are no safety features or signs.

Just south of the crevices we come to Meridian Creek picnic site, a pleasant creek-side spot just back from the lake shore. Shortly after that, the road curves west along the south shore of the lake. Here we come to the small but beautifully situated Sandy Beach campground along the lake shore. When we visited last week, we were the only ones staying there. Nearby is the turn-off to T&D Amisk Camp fishing lodge.

A few metres farther, the road ends where the Sturgeon-Weir River continues its course south of Amisk Lake. In the early 1900s this area was site of Saskatchewan’s first gold rush when a discovery was made by Tom Creighton. A community known as Beaver City (by the way, “Amisk” is the Cree word for “Beaver”) sprang up but was short-lived as most mining activity moved to Flin Flon. Look carefully along the shoreline and you can see remains of cement block and cables. In 1949, when the Saskatchewan government was dragging its feet on the promised road, a local committee built a one-lane wooden bridge in hopes of shaming the government into action. The bridge never lasted long and most it has long been washed away.

The history of the Sturgeon-Weir River goes back even further. During the fur trade, this waterway was a crucial connector between the Saskatchewan and Churchill River system. It was part of the voyageur highway, and every prominent explorer from Peter Pond to Alexander Mackenzie and John Franklin passed through here.

There’s a nice picnic spot at road’s end, but a spot we like even better is just to the north. Across from the picnic site follow the minor road heading north (there’s no sign) a few metres to another picnic spot at Limestone Point. The parking area and picnic table are on a pancake-flat area of limestone that resembles a paved patio. Just beyond on the shoreline, a jumble of flat limestone rocks juts into the lake. Some are pock-marked with holes that turn brilliant red when wet.

If you have a boat or canoe, this is a great place to explore some of the lake’s south shore, not to mention fabulous fishing. Not too far away is Warehouse Bay, site of an ancient rock painting site. For a short excursion, head across the bay to see some of the rocky shores with lichen-covered rocks appearing an unreal golden-orange colour. 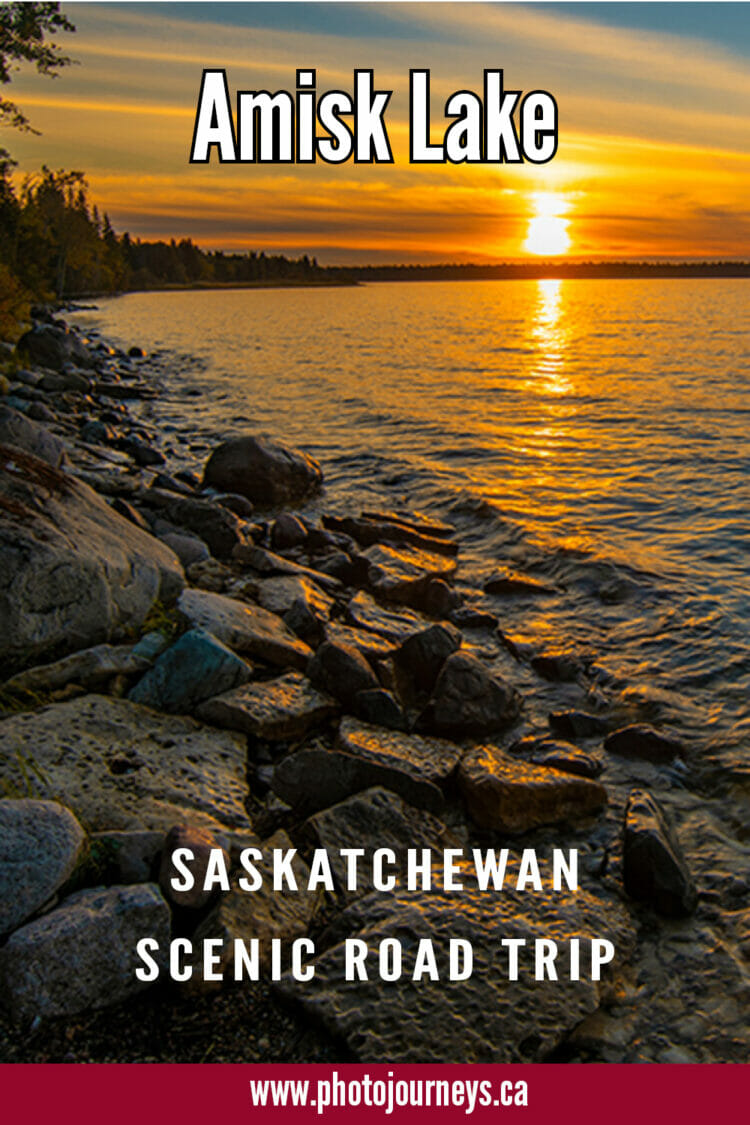