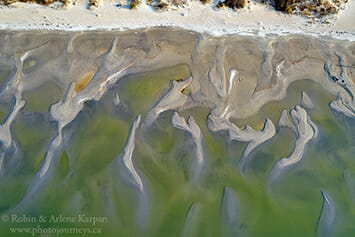 Drones can open up a whole new world of photography, giving us perspectives that are difficult to perceive in other ways. They can rise high above the treetops or other obstructions, let us see an entire waterfall instead of just an isolated section, follow a road winding far into the distance, and so much more. They are also useful tools to capture grand landscapes when we don’t have a high enough vantage point from the ground.

But when we use a drone to shoot at an oblique angle, such as to include both the landscape and part of the sky, it is essentially photographing in much the same way as if we are on the ground. Sometimes it’s hard to tell if the image was taken by a drone or if the photographer was standing on a mountain top or even on a high hill.

One of the most innovative ways to get creative with drone photography is the top down shot, where we point the camera straight down at the subject. Also referred to as the bird’s eye view, this is an angle that we can’t get while on the ground, other than in some rare circumstances such as standing on the edge of a sheer cliff. This allows us to see the landscape in ways that we wouldn’t notice from ground level.

Seeing the forest for the trees

Top down photos of trees and forest are especially fun to do. Since most drone lenses are fairly wide angle, the distortion caused by the view just above the tree tops makes for interesting effects. The trees right in the centre of the image seem to go straight down while all others appear to be leaning away from the centre.

A prime time for these types of shots is during fall colour season. With a top down approach, we concentrate on seeing the leaves rather than the tree trunks and branches, often making for a more colourful scene. It’s also the best way to see the colour variations among trees. We especially like photographing aspen trees this way. Trembling aspens reproduce primarily by root suckering, so a group of trees often comes from a single source. From above, we can see this mix of tree groupings where one group may be well on its way to changing colour while another might still be quite green.

Get creative with shadows

When we photograph straight down, and the sun is low on the horizon, the photograph may be more about the shadow thrown by your subject rather than about the subject itself. A classic example of this is photos of trees. The best is when you can find a single tree standing in the open, or else a row of trees. Looking at a tree from straight above, it might even be difficult to tell what we’re looking at. It’s the long shadow that gives an artistic interpretation of the tree. Ideally, it’s best to shoot where the shadow falls on a simple, uncomplicated background. A prime time is winter when the shadow falls on undisturbed snow.

See through the water

At ground or water level it might to difficult to fully appreciate, and photograph, interesting colours and textures below the water surface. But by shooting from straight above, we can often cut through the glare. The results can be revealing.

A great way to do abstracts and patterns

Photographing abstract scenes at ground level often means getting quite close to isolate a small piece of the landscape. With a drone we can do the same thing, although we can use a much larger part of the landscape. The following photo is an oblique view of a canola crop in bloom (yellow) next to a flax crop in bloom (blue), and is a realistic interpretation of the scene. The next photo also shows a canola crop and flax crop next to each other. But by photographing straight down we can isolate part of the scene, giving it an abstract interpretation. If you looked at this photo in isolation, without any context, would you even identify this as two crops?

Also check out our posting Drones Take Your Photography to New Heights where we give an introduction to drone photography and discuss regulations and requirement for drone use. 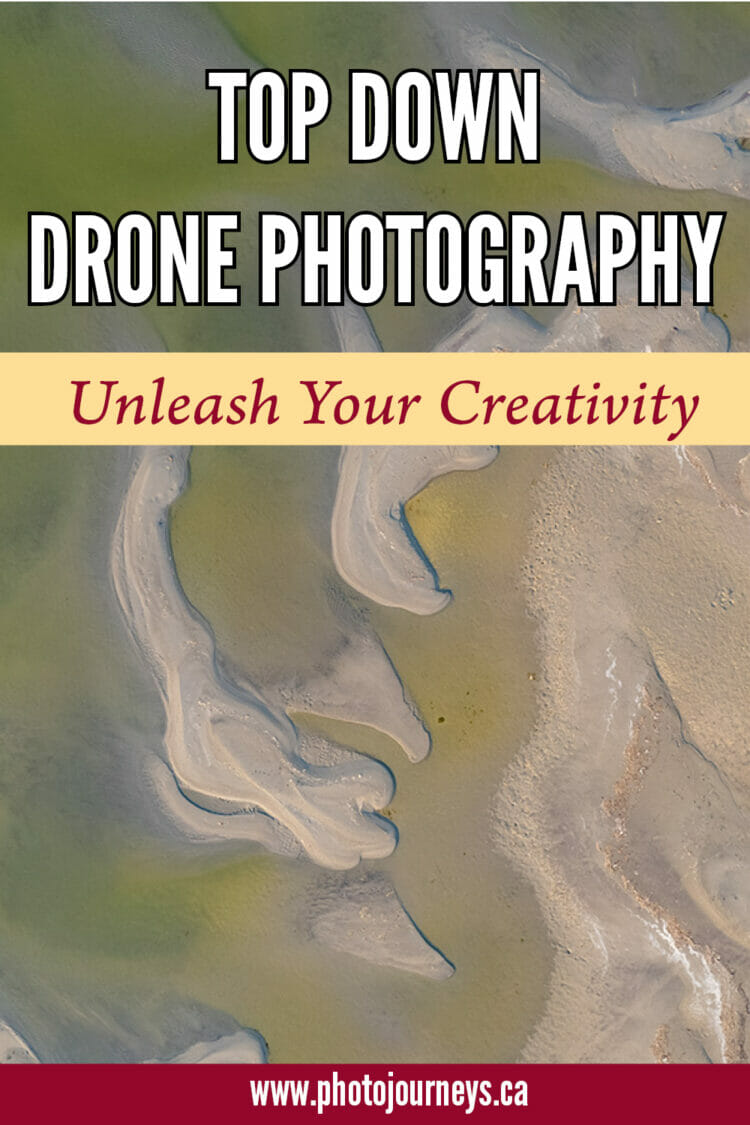