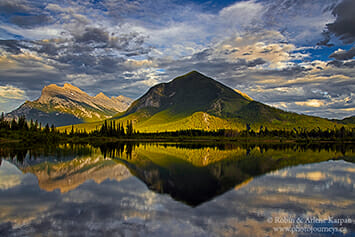 Full-frame, cropped sensor, mirrorless, DSLR, micro four thirds, action cameras — the choices seem mind-boggling. If you’re thinking of buying a new camera or are just getting into photography, be prepared to be overwhelmed. Rapidly changing technology and recent trends may influence your decision. Here are some of things to consider and a few of the pros and cons of each choice.

The gold standard for years has been the DSLR (Digital Single Lens Reflex) camera, which works similar to 35mm SLR film cameras. Through the viewfinder, you see the scene reflected in a mirror. Press the shutter and the mirror pops up, and the image is recorded on a sensor or film.

Because these cameras have been around for a long time, there is a huge selection of lenses. You can often find good quality used lenses at reasonable prices. We have some older lenses that we originally bought for film cameras but that also work equally well on DSLRs.

DSLRs come with either a full-frame or cropped sensor. With full-frame, the sensor is the same size as a frame of 35mm film. Advantages include the ability to capture a higher range of dark and light tones, better low-light performance and a file size capable of making large prints. However, they are heavier, bulkier, and more expensive.

Cropped sensor cameras work the same but have a smaller sensor. They are slightly smaller, weigh less and cost less. Choosing lenses takes more thought, however. If you use a lens intended for a full-frame or film camera, its focal length will appear higher. Known as a crop factor, it varies slightly among camera brands.

For Nikons, the crop factor is 1.5, so a 200 mm lens intended for a full frame or film camera will effectively have a focal length of 300 mm. While that might be an advantage for telephoto lenses, it’s a problem for wide-angle lenses that no longer have as wide a field of view. To compensate, some lenses have been made specifically for cropped sensor cameras, especially at the wide angle end.

Until recently, the DSLR has been the camera of choice for professional photographers and serious enthusiasts. That is changing. The biggest recent development has been the growing popularity of mirrorless cameras. Most manufacturers have concentrated on them lately, so it seems to be the wave of the future. As the name suggests, these cameras don’t have a mirror, which means fewer moving parts, lighter weight, quieter operation, and a lot of other high-tech gadgetry.

Mirrorless also come in full-frame and cropped sensors. Full-frame models tend to be pricey. The recently released Nikon Z9, for example, is a whopping $7000 without any lenses. So far at least, there are fewer lens choices for mirrorless cameras, though that is changing. Depending on the brand, you may be able to use old lenses by buying an adapter. However, in some cases you may lose functions such as auto focus on certain older lenses. If you are thinking of buying a mirrorless camera with the intention of continuing to use your existing lenses from your DSLR, it is important to research which lenses will continue to work properly.

Not everyone wants, needs, or can afford a state-of-the-art DSLR or mirrorless camera. We can also choose from a huge range of compact options, everything from point-and-shoot to so-called “bridge cameras” that bridge the gap between low and high end.

Some may have many features similar to big cameras but in a more compact package. Micro Four Thirds cameras are quite popular, especially for travel. The sensor size is around a quarter that of full-frame but they still provide sufficient resolution for most uses at a lower price. To really get compact and lightweight, there are “action cameras”, the most popular being the GoPro. While they don’t have the capabilities of the big cameras, they can still provide excellent results, especially in favourable light conditions.

Another major trend is that basic point-and-shoot cameras are being replaced by smartphone cameras, many of which have better quality and features.

Decide based on your style of photography

There is no one best camera. It depends on the kind of photography you like and your budget. For sharing vacation photos online, or making smaller prints, practically any camera today will do, even fairly inexpensive ones.

Certain features are worth considering for more specialized photography. A fast frame rate and highly responsive autofocus are great for wildlife. If you’re mainly into landscape photography, a fast frame rate isn’t necessary. Full-frame cameras have a huge advantage for low light and night-time shots.

Cameras with larger sensors and more megapixels allow you to make large prints without losing resolution, or to crop. For example, if you get a super shot of a bird flying and it only fills a small part of the frame, you might be able to crop the image significantly and still have enough resolution for a usable photo.

While you may not “need” a lot of features, having cool toys to play with is an important part of any hobby.

We purposely haven’t addressed the question of which brand of camera to buy because we consider that to be less important than the type of camera. Any of the main brands such as Nikon, Sony, and Canon, among others, make cameras that will do the job. While each brand certainly has its strengths and weaknesses, they all do much the same thing – help you take pictures. The internet and YouTube are full of comparisons and reviews that will help to narrow down the choices based on the features that you consider most important. 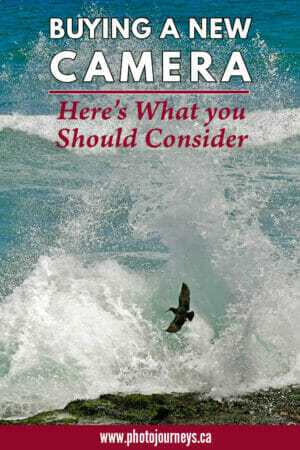