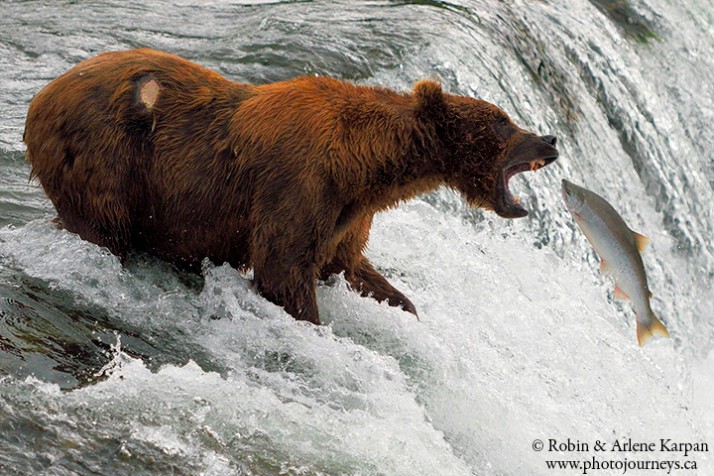 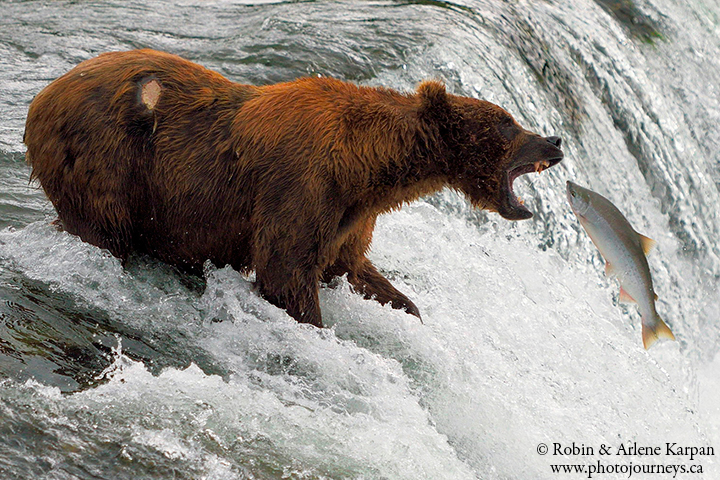 Our wildlife photography highlight this past summer was undoubtedly our close encounters with brown bears (larger cousins of the grizzly) in Alaska’s Katmai National Park. We’ve been fortunate to have visited many of the world’s wildlife hotspots, and we would rank Katmai as among the best of the best for photography. Despite being fairly remote (there’s no road access to Katmai, for example), it is reasonably easy to visit. Most amazing, a visit can be remarkably inexpensive if you play your cards right and do some advance planning. More about that later. 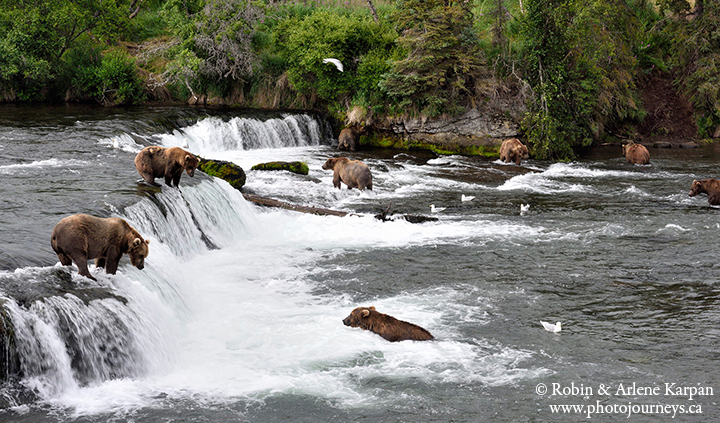 The prime time to come here is July (usually around mid-month) – when massive numbers of sockeye salmon swim up the Brooks River to spawn. Their progress slows when they struggle up Brooks Falls, where bears wait in ambush and gorge themselves on the bountiful buffet.

We stayed in the park campground, surrounded by an electric fence, and twice a day took 2-km or so hike (one-way) to the falls – over the bridge at the river mouth, then along a narrow path through thick bush. Bears could be anywhere, but the most frequent “bear jams” were at the bridge. Park rangers stationed on either side frequently closed the bridge when bears were nearby, forcing visitors to wait on either side until the bears wandered off. 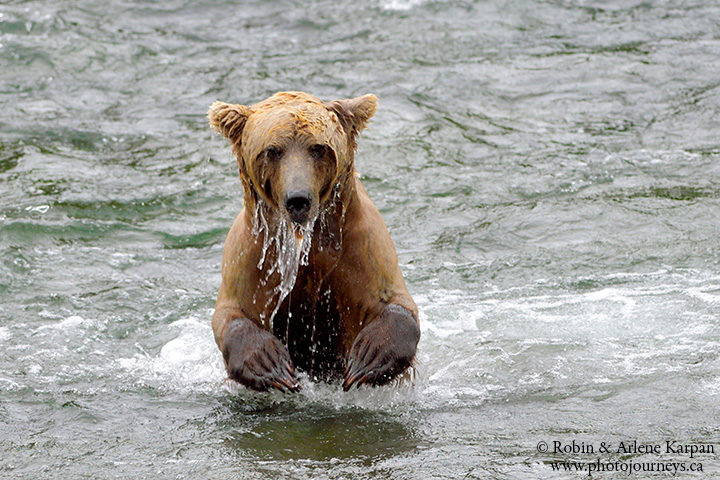 A raised viewing platform looks over the falls, where it felt like we were in the midst of a wildlife documentary. One evening, we counted 21 bears from one spot. Each has different fishing strategies. Some stood motionless and stared into the water, then suddenly pounced on a fish. Some stood high on their hind legs for a better view over the water, while others “snorkelled” with their heads just below the water. The stars of the show perched on the brink of the falls and waited for the fish to jump. With the right timing, a bear could simply open its mouth while the salmon unknowingly leaped right in. 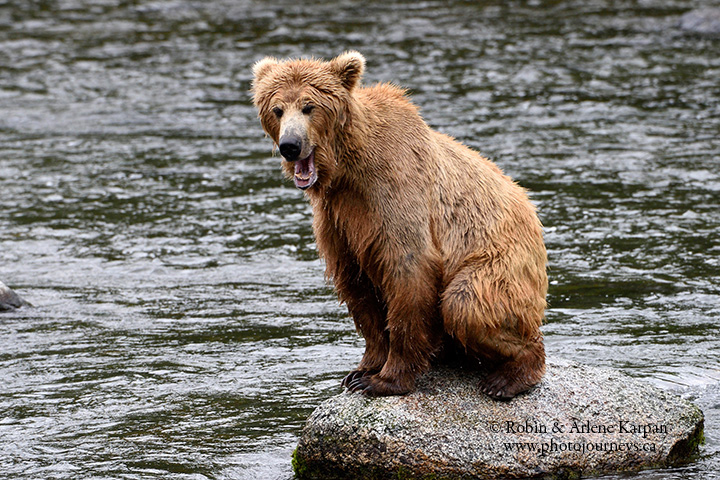 Bears generally don’t like being so close to each other, but here the pickings are so good that they tolerated the crowded conditions. Or at least they tried. Though there’s plenty of food to go around, squabbles over prime fishing spots were frequent. Often a heated growling match resulted in one bear backing down, but sometimes it got serious. A mother who felt threatened by a large male getting too close to her two cubs, attacked with such ferocity that the male almost twice her size retreated. 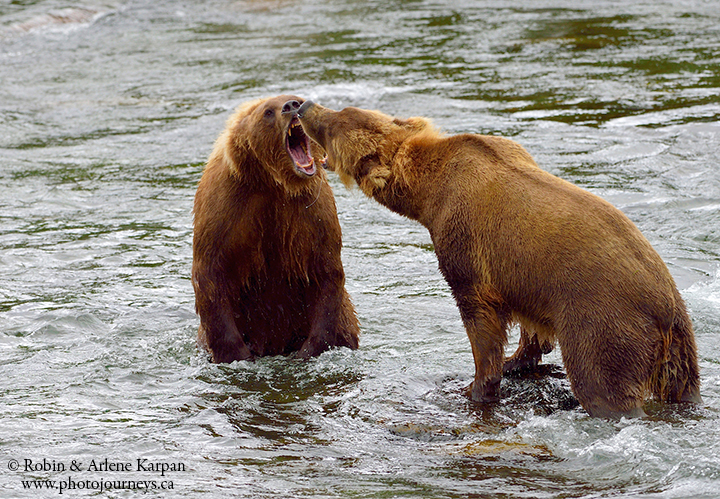 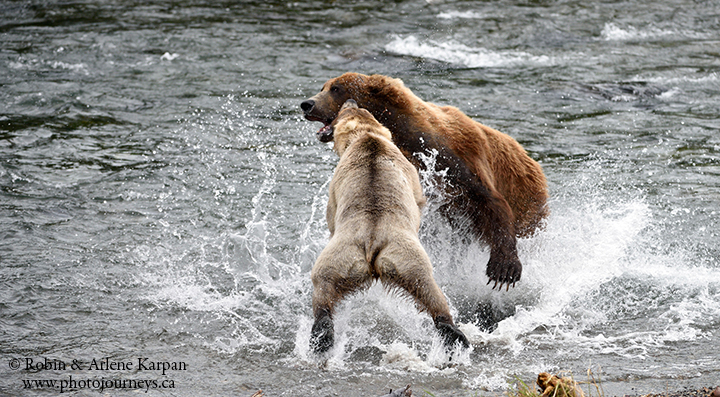 We used two lenses for the vast majority of shots – a Nikon 200-400 f4, and a Nikon 70-200 f2.8. We took teleconverters to increase the reach of the 200-400, but never used them – 400mm was usually sufficient. We used full frame cameras – a Nikon D800 and D810, and occasionally we used the DX crop mode when we wanted a distant subject to fill the frame. This had the added advantage of allowing for a faster burst rate for action shots. The faster the lens (with a large aperture opening, such as f2.8), the better. Katmai has a reputation of being a cloudy, rainy place. During our four days there, we never saw the sun for more than a couple hours in total. However, we heard that the previous week had been bright and sunny, so you never know. 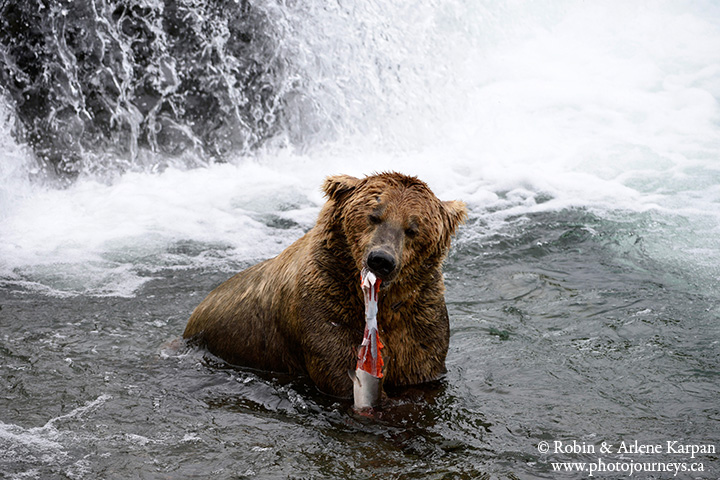 Zoom lenses are ideal. A wider setting allows you to capture more of the scene, but you can quickly zoom in if some unexpected action erupts, such as a bear fight. In some cases, a wide angle lens is best. A few times, bears wandered right in front of the viewing area, including a mother with four cubs. We consider a tripod essential, although you could get by with a monopod, or even handholding if the lens is fast enough and has a stabilizer. We often spent hours at a time at the falls, so handholding would have been extremely tiring. 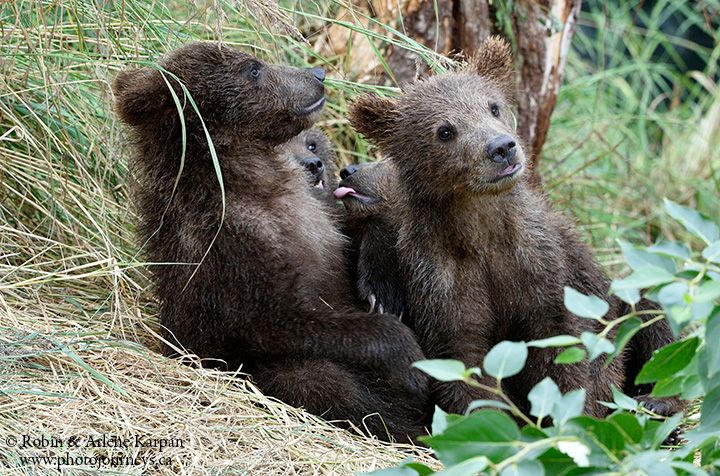 With the popularity of Brooks River, and such a short season, the viewing platforms can get crowded. Park rangers use a rotation system most of the day, allowing people to stay an hour at a time at the main viewing area. After your hour is up, you can put your name back on the list to get another hour after others have had their turns. Controlling the number of people is only an issue when day-trippers are there – roughly between 9:00 and 5:00. We found that the action at the falls was almost always best during the long evenings – times when it was never crowded with people. 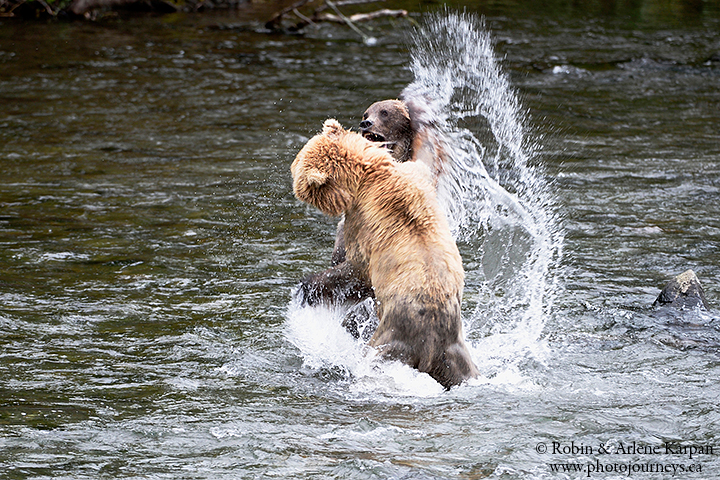 So when is the prime time to go? Mid-July is usually regarded as the best time for hitting both the peak of the salmon run and bear activity. Consequently, flights, accommodation, and campground space are also in high demand at this time. We caught plenty of bear activity during our visit from July 21-25, but we also heard that the salmon run was a bit later than normal. The peak of the run could vary from year to year, so all you can do is plan ahead and make your arrangements, hoping that everything will come together on the dates you’ve booked.

Logistics of travelling to and staying at Katmai, and how to do it economically. 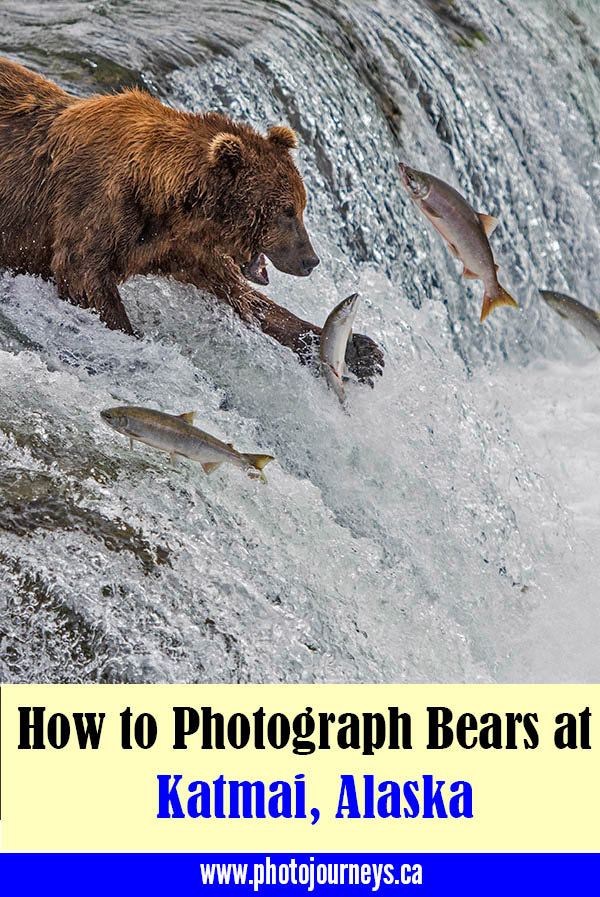