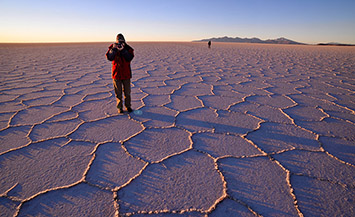 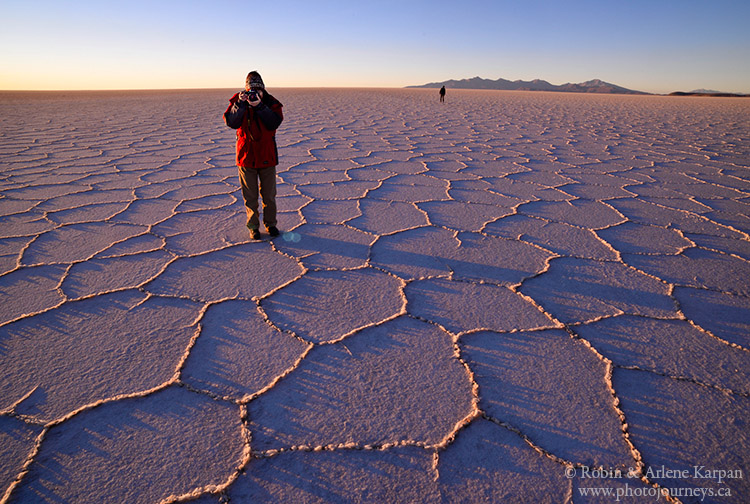 We arrived before dawn in the middle of Bolivia’s Salar de Uyuni, the world’s largest salt lake – bone dry during the southern hemisphere spring. The full moon cast a soft light over the immense salt flats, then as it dipped below the horizon, the rising sun suddenly washed a warm glow over the brilliant white salt, crystallized into strange polygon patterns that stretched to the horizon.


It was the last major stop on our 4-day trip through Bolivia’s spectacular southwest circuit (the subject of our last post). The previous night we stayed on the edge of the salt flats in a “salt hotel”, where salt blocks are used for some of the walls, as well as for tables and chairs in the dining room. The floors are covered in crushed salt, resulting in odd crunching sounds whenever anyone walked around. At mealtime, you never have to ask anyone to pass the salt.

After sunrise, we went to the middle of the lake to the Island of Incahuasi, a strange rocky piece of land on the remains of a volcano, and consisting of fossilized algae and coral from an ancient inland sea. While it’s a tough place for plants to grow, almost the entire island is covered in giant cacti, some up to 10 metres high and hundreds of years old. Years ago, the island was a rest stop for Incas who travelled with llamas across the salt flats with trade goods destined for Chile. Today, it is preserved as a national park. From the top of the island, we have a 360 degree view of the seemingly endless sea of white in this immense lake covering over 10,000 square kilometres in the high plains in the Andes. 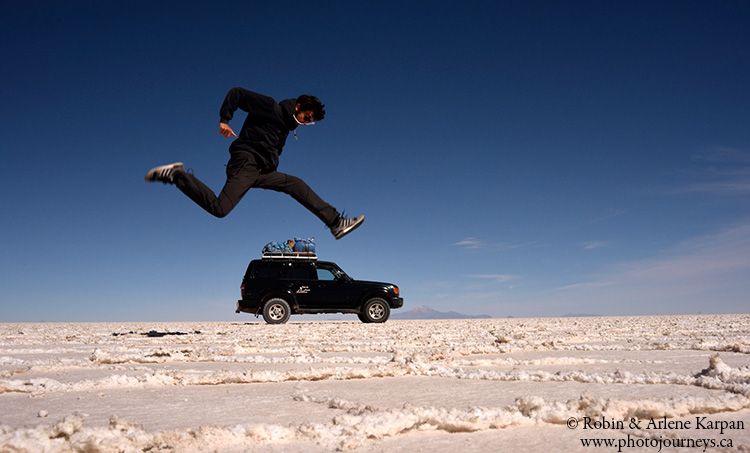 We made another stop in the middle of the great expanse to take some obligatory silly pictures, such as jumping over the car. The flat, featureless landscape plays tricks with perspective, so it’s a great place to let your imagination go wild and try some really weird stuff.

While Uyuni still has a back-of-beyond feel to it, there may be changes coming over the next few years. The salt lake is thought have over half of the world’s reserves of lithium, important for use in such things as batteries and cell phones. So far at least, the mining is taking place on the edges of the salt lake.

To photograph the salt flats, bring the widest lens you have to help capture the full immensity of the landscape. A tripod is essential if you want to get sharp images with lots of depth of field in low light, such as around sunrise. As the sun gets a little higher, a polarizing filter is helpful in the unbelievably glaring white of the salt flats. Several companies offer trips through the Uyuni salt lake and farther afield into the southwest circuit. If you want to take photos at either sunrise or sunset, by far the most photogenic times on the salt flats, be sure to check which companies allow for this. Some trips starting in Uyuni visit the salt lake during the day, then move onto the next destination without giving you this opportunity.