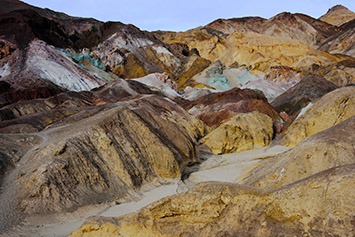 
While our last two postings dealt with two of Death Valley’s most famous photo ops – Zabriskie Point and the wildflower bloom – that’s only the beginning of the possibilities. The largest national park in the USA outside Alaska, Death Valley is a series of mountain ranges, valleys, canyons, badlands, and sand dunes. Most impressive are the vibrant multi-coloured rock formations, such as the aptly named Artist’s Palette, where it looks like gigantic splotches of paint. Much of the park is reached by paved road, with numerous minor gravel roads (some requiring four-wheel drive) to explore farther afield. Hiking trails abound, from easy walks offering close-up views of spectacular canyons, to major backcountry treks. 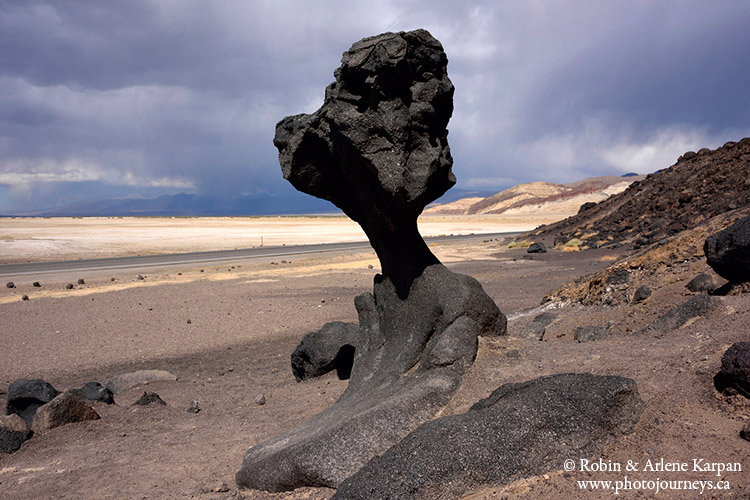 Calling Death Valley a land of extremes is an understatement. Badwater Basin, with its large expanse of salt flats, is the lowest point in North America at 86 metres below sea level. Yet overlooking it are snow-capped mountain peaks. High temperatures were around 30 degrees C during our early March visit, and this was still early spring. We wouldn’t want to be here in mid-summer when 30 is the average low, and highs are in the mid-40s. Death Valley holds the record of the hottest temperature ever recorded on Earth: 56.7C, or 134F.

The morbid name dates to 1849 when a group of California-bound pioneers decided to shortcut through the desert and became lost. One man perished, and things got so desperate that they killed and ate their oxen. When they were finally rescued, one of the group said “Goodbye death valley,” and the name stuck. 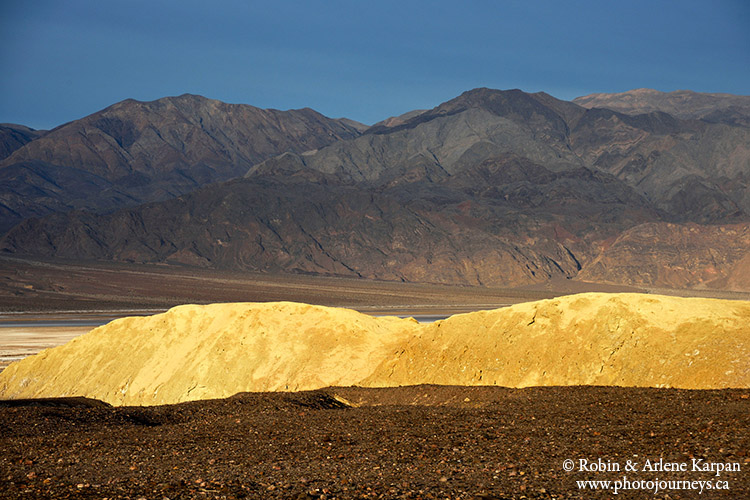 While Death Valley is in California, it is right next to the Nevada border, so the closest airport is Las Vegas, less than three hours away. That was our route – flying into Las Vegas and renting a car. The park has limited and fairly pricey accommodation, making camping the main option for most visitors. We stayed at the main campground, Furnace Creek, which takes reservations ($18 per night). All other park campgrounds are first-come, first served (most charging $12). Visiting Death Valley had been on our wish list for many years, so when we read reports promising an exceptional spring for flowers (see our March 6 posting), we decided to go on fairly short notice. Planning just over two weeks ahead, we got one of the last campsites still available for booking. March is a busy season to begin with, plus the prospect of a “super bloom” brought even more visitors than normal.


If you’re planning to camp, here are a few things to keep in mind. For tenting at Furnace Creek, we would recommend the walk-in, tenting-only sites. Some of the sites have shade (handy in the hot weather). You can see what each site looks like at this site http://www.campsitephotos.com/campground/Furnace-Creek. Sites have a table and fire pit, and there are central washrooms with toilets, cold water sink, and dish washing sinks. If you want a shower, you can a get a day pass for the swimming pool at the nearby Furnace Creek Ranch resort for $5. For food, bring absolutely everything with you. We stocked up at a supermarket in Pahrump, about half way between Las Vegas and the park, and we were so glad that we brought enough for our entire stay. There is a store at the resort which has very slim pickings at very high prices. They sell ice, so you can keep your groceries cool. There’s a restaurant at the resort but be prepared for sticker shock. Also top up the fuel in your car before arriving at the park, where gas prices are almost double. By planning ahead, a visit can be fairly economical. Park admission fees are only $20 for a car for a week. 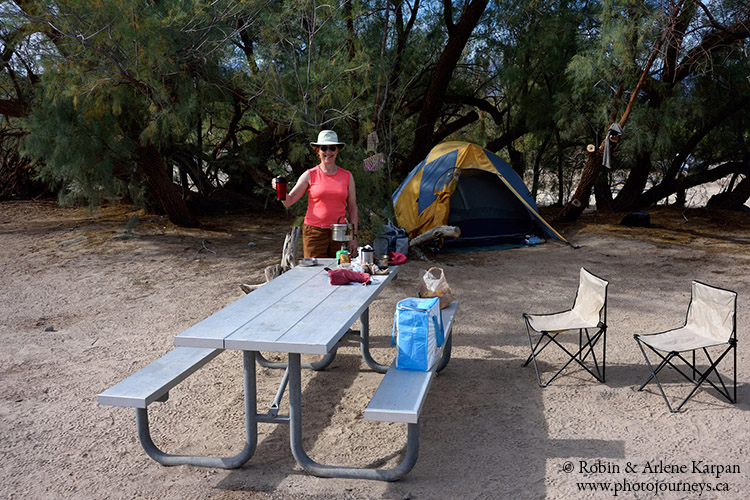 Other smaller campgrounds are scattered throughout the park. If you want to be close to the sand dunes, especially for early morning photography, a good option is the campground at Stovepipe Wells. Some of the sites for tents back right up to the dunes. However, the campground is wide open with no shade, and we can only imagine what it would be like during one of Death Valley’s frequent wind storms.

We spent six days, and there were huge parts of the park we never saw. We were impressed enough that this will likely be a place we return to some day.

For more information, see the park website at www.nps.gov/deva 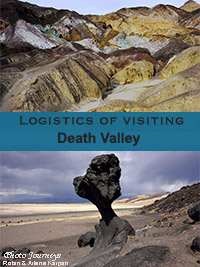