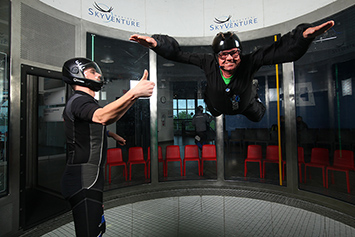 If you’re intrigued by the thrill of skydiving, but don’t fancy the prospect of jumping out of airplanes, then indoor skydiving (that’s right – indoors!) is the perfect choice. It not only simulates the experience of free-falling, but allows you to seemingly defy the law of gravity by flying suspended in mid air. We recently gave the sport a try at SkyVenture in Laval, Quebec, just outside Montreal. It definitely ranks among the coolest things we’ve done anywhere.

Indoor skydiving, also known as body flight, is possible with a powerful wind tunnel that blows air close to 200 km/hour, sometimes more, about the same speed that you would experience in a skydiving free-fall. That’s enough to keep you suspended in mid air. Since they can adjust the wind speed, it can be cranked up to where you can fly upwards, something you can’t do in traditional skydiving.


The wind tunnel at SkyVenture Montreal was the first of its kind built in Canada, and is still one of very few places in the country that offer this experience. The floor of the flight chamber is a trampoline-like mesh of steel cables that the wind flows through. An instructor is always with you, guiding your movements and helping you manoeuvre around to get the sensation of free-falling. It’s a very safe environment, and practically anyone can do it, unless you have certain health issues such as a dislocated shoulder or major back problems. Children as young as four are allowed.

Before flying, our instructor Guillaume took us through a training session, explaining how things work, how to hold your arms and legs out, and hand signals he would be using in the wind tunnel; forget trying to speak – it’s incredibly noisy and we’re wearing earplugs and helmets. Depending on how stable you are in the wind, he might signal to bend or straighten your legs, keep your chin up, relax your body, or smile. He cautioned about smiling with your mouth open, however. The powerful wind can make your lips flap around and can even blow the saliva out of your mouth.

Approaching the open door of the tunnel is a bit disconcerting at first. The proper entry is to stand on the edge of the doorway, put your hands in front on your chest, and simply fall forward. The wind immediately catches the upper part of your body, while the instructor lifts your legs. Suddenly you’re flying. What an incredible rush to be floating in mid air, held up by the hurricane-force wind. It’s possible to simply hover in one spot, but part of the thrill is to manoeuvre around by slightly tilting your arms and body. Guillaume was there to correct any mishaps we had, such as tilting too much and losing the lift of the wind. It seemed rather strange to be floating in mid air while Guillaume remained standing, his feet on the mesh floor. While he was subject to the same wind force, he didn’t float away as long as he remained vertical.


We each did two one-minute flights, which is the approximate time for a freefall portion of a skydive. The third flight was two minutes, the grand finale being a flight up – way up and fast. Guillaume first confirms that you want to go ahead with this with the pre-arranged hand signal, and when you give him the thumbs up, he holds onto you, they quickly crank up the wind velocity, and together you go shooting up to the top of the 45-foot wind tunnel. They cut the wind and you come falling down, only to be shot up to the top again with another blast of wind. This happened three times in quick succession – the ultimate adrenaline rush of being a human yo-yo.

Indoor skydiving as a competitive sport

The manoeuvres we can do as first-timers are fairly basic. With repeated flights, it’s possible to fly higher on your own, and even do tricks like flying upside down and various acrobatics. We can see how easy it would be to get hooked on this sport. The next level is competitive body flight. We were fortunate to have Guillaume as an instructor since he is a champion in this sport and will be representing Canada in the 2017 Indoor Skydiving World Championship, to be held in Laval, October 18-23. While little-known in most parts of Canada, this is a major international sport that is growing. The stuff they do at that level is almost beyond belief – seemingly running up the walls, whirling around in circles, doing somersaults, sitting in mid-air, you name it. Guillaume put on a short demonstration of freestyle acrobatics for us, and it was difficult even following him with our eyes. The competition will be live-streamed so we can see how he does. 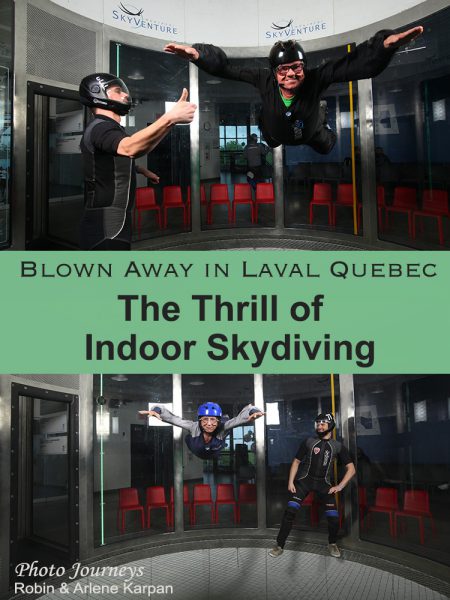