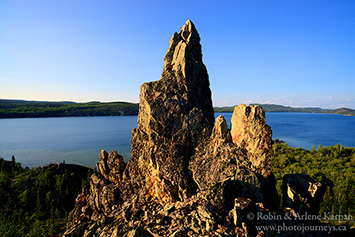 Lake Athabasca is the largest lake in Saskatchewan, the ninth largest in North America, and the fourth largest completely within the borders of Canada. Everything about it is big, including having some of Canada’s largest lake trout and northern pike. With a body of water this size, we would expect the landscape to vary, but Athabasca’s north and south shores are like two completely different worlds. The south shore is low-lying, with shallow, sandbar-riddled shores, and sandy terrain home to the famous Athabasca Sand Dunes (more about that in future postings).

The north shore is classic Canadian Shield country, with vast rocky outcroppings, granite cliffs, forested hills, myriad islands, and deep bays that seem like separate lakes. While we would be hard pressed to decide which is our favourite river in Saskatchewan, there’s no contest coming up with our favourite lake—big, bold, beautiful, and sometimes foreboding, Lake Athabasca. No roads link the north and south shores, so the options for travel are plane, boat, or canoe. There is such a superabundance of photo possibilities here that any list does little more than scratch the surface. The north shore is about slowly wandering by boat or canoe, exploring the endless coves and islands, and discovering hidden gems. In this two part series, we’ll look at a few of our top picks.

Islands of the Crackingstone Peninsula

The Crackingstone Peninsula juts far down into the lake south of Uranium City, its southeast shore lined with several islands tailor-made for exploring. At the south end, large, narrow Johnston Island has a deep protected bay that, in addition to being photogenic, is known as a great fishing spot. At the bottom of the bay, cross the narrow ridge to the island’s south shore to rockhound heaven (N 59.33531 W 108.91658). Among the numerous rock formations are smooth, flat expanses that look like colourful inlaid table tops. Talk about being old! They are two-billion-year-old basal conglomerates, where light-coloured boulders were mixed in a red iron-rich matrix, then glaciated and wave-washed over the years.

A bit farther northeast lies Anderson Island, almost entirely covered in stones and boulders, sculpted by Mother Nature into a work of art. The higher areas, partially encrusted in lichen, are ancient beach ridges, while the shoreline has been formed into ridges by ice push and wave action. Some areas look like purposely arranged Japanese rock gardens (N 59.41698 W 108.56880).

Lodge Bay is at the northeast corner of the peninsula, not far from Uranium City. Looming over the bay is Beaverlodge Mountain, the highest point of land in the area and source of an ancient Dene legend (N 59.46770 W 108.53855). The story goes that this was once the lodge for a giant beaver. A hunter, also a giant, tried to kill the beaver with a spear. Thinking that the beaver was dead, he threw it onto the south shore of the lake. But the beaver wasn’t quite dead, and it thrashed around to such an extent that the soil was ground into sand. And that, according to legend, is how the Athabasca Sand Dunes came to be.


The best view of Beaverlodge Mountain isn’t from Lodge Bay itself, but rather from the east shore of Neiman Bay ( N 59.45765 W 108.49773 ), the next bay to the east. Along the way you pass the ghost town of Goldfields, site of an early gold mine.

The other highlight at Lodge Bay is a pinnacle formation near the southwest end (N 59.43373 W 108.59884). Eons ago a cliff face collapsed, leaving a chimney-shaped rock still standing. It’s a reasonably easy scramble over enormous boulders to the base of the pinnacle with exceptional views over the bay of myths. Take your widest lens for photography at the top if you want to include the pinnacle as part of the overall scene. Looking towards the bay with the pinnacle in the foreground, you face mostly northeast. Evening brings some nice sidelighting to the scene. 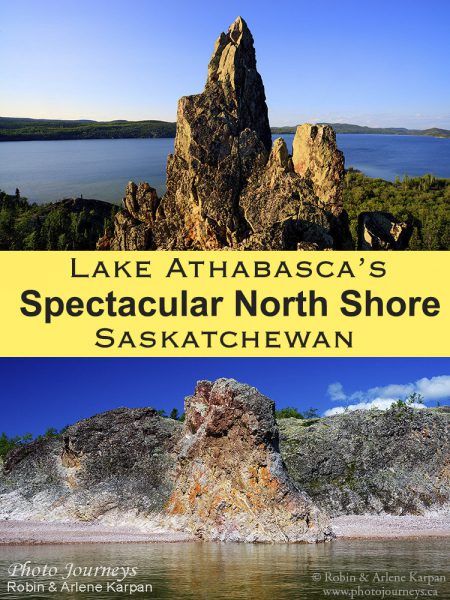