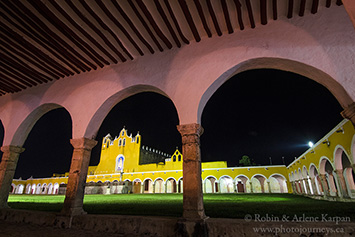 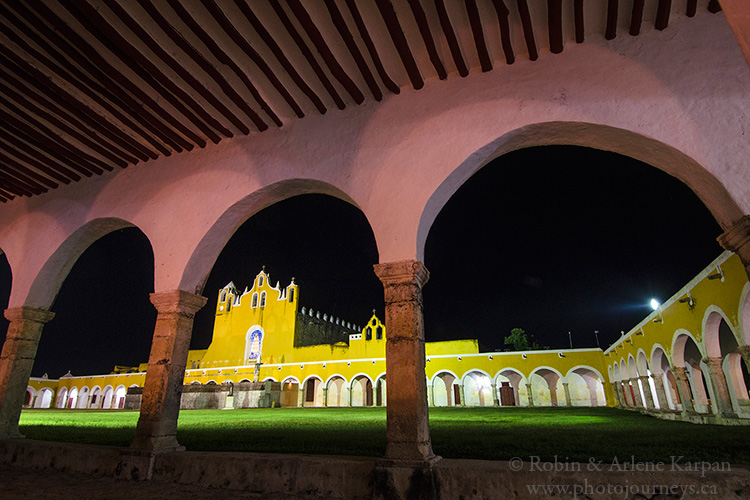 Izamal is an officially designated “Magical Town”, one of 35 in Mexico, and one of only two in the State of Yucatan (the other being Valladolid). An official Magical Town has to be small (at least small by Mexican standards), rich in historic tradition, and be well preserved. Izamal certainly fits the bill, with restored colonial buildings along narrow cobblestone streets, a rich Mayan heritage, plus a UNESCO World Heritage Site designation thrown in for good measure.

Located 70 kilometres east of Merida on the northern part of the Yucatan Peninsula, Izamal is very easy to travel to and a delight to visit, yet it’s far enough off the beaten track so as not to get inundated with tourists. 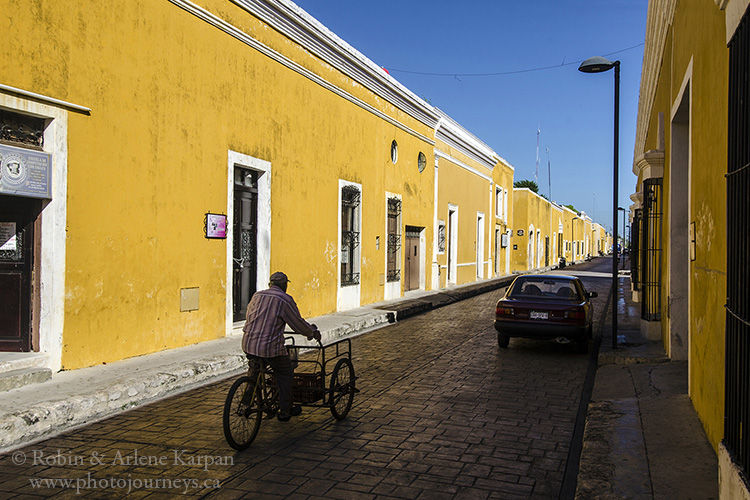 What immediately stands out when you enter this town is that almost every building in the historic centre is painted a brilliant egg-yolk yellow, giving it the nickname of La Cuidad Amarilla, or the Yellow City. There are various stories as to why they chose to paint everything yellow. One version has to do with sprucing up the town in time for the Pope’s visit in 1993, and the fact that yellow is the dominant colour on the Vatican flag. Or maybe they just got a heck of a deal on paint by buying in bulk. 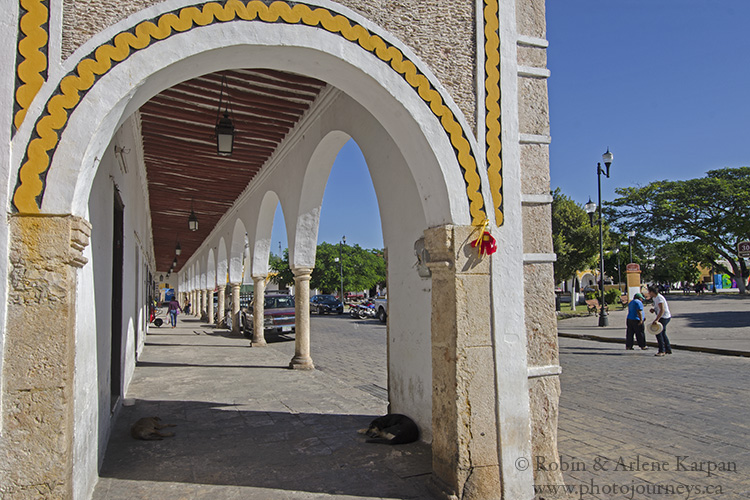 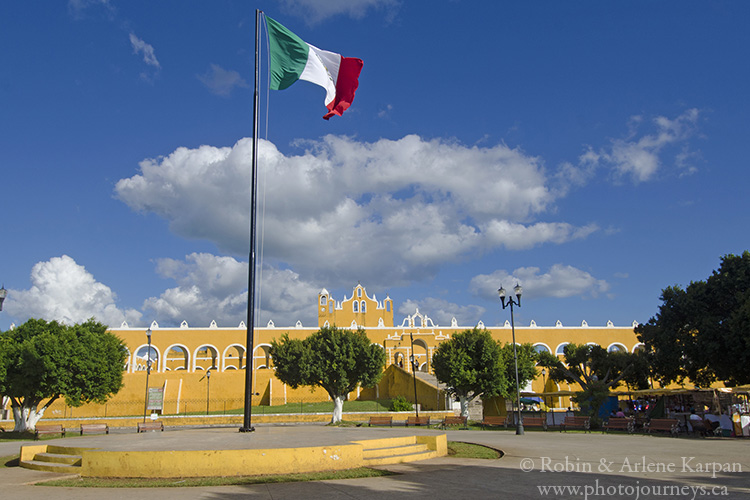 Izamal seems covered with hills, unusual in pancake-flat northern Yucatan. But these “hills” are actually the remains of Mayan pyramids and other structures. For centuries, this was an important centre for the ancient Maya. When the Spanish colonials conquered Mayan cities, they often built their own cities over the Mayan buildings. The massive colonial Franciscan monastery, which dominates the town, appears to be on a hill, but rather it is built on top of an ancient Mayan structure.

The Monastery of San Antonio de Padua was completed in 1561. The expansive atrium, surrounded by 75 archways, is considered the second largest of its kind in the world, after the Vatican. During its heyday, Izamal was among the largest towns in the Yucatan Peninsula. It has long been a place of pilgrimage, and miracles have been attributed to the statue of the Virgin Mary in the church. Even before the Spanish conquest, this location had religious significance to the Maya who considered it to be the home of the sun god, Kinichkakmo, and the god Itzam Na (from which the name Izamal was derived). 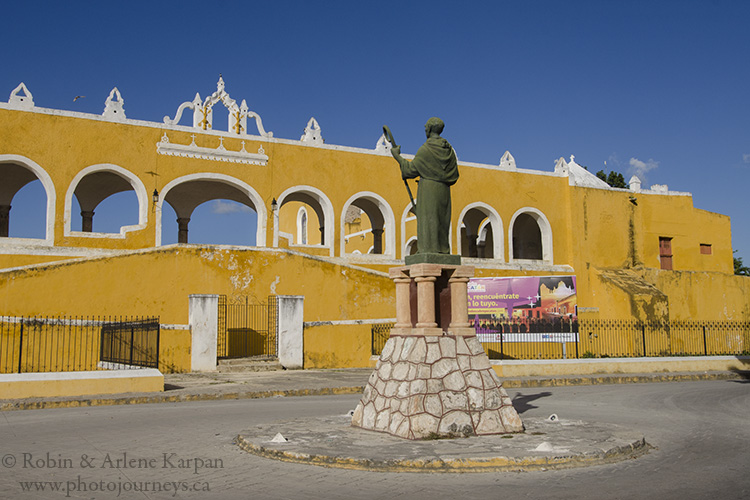 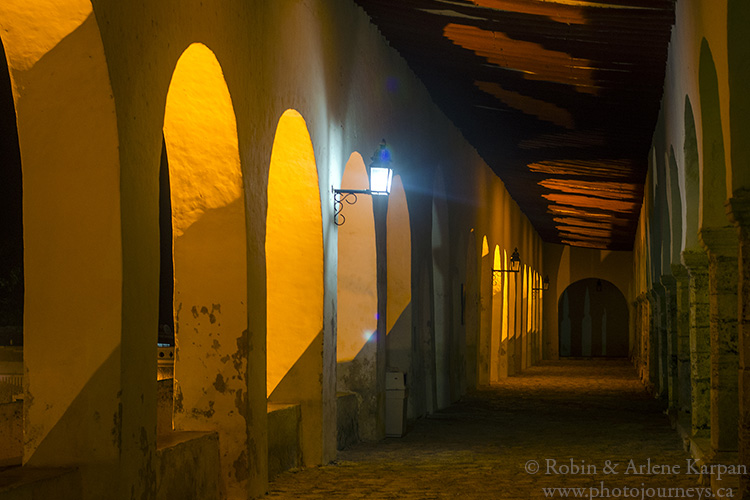 This is a pleasant town to simply wander along the cobblestone streets, or perhaps take one of the colourful horse-drawn carriages, or calesas, for a tour around town. The market complex, right next to the monastery, is worth a visit, and has several places to eat. 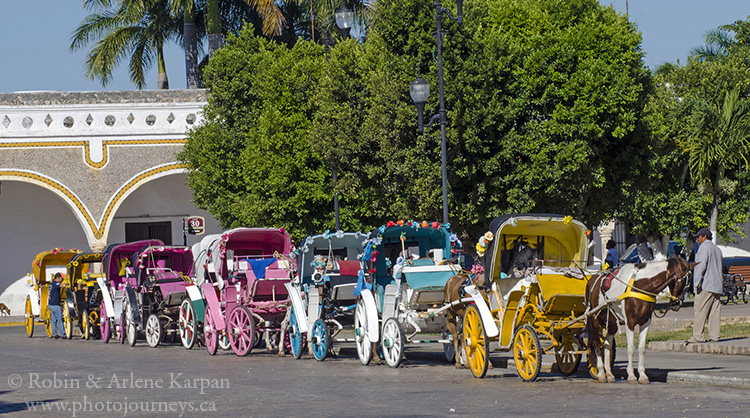 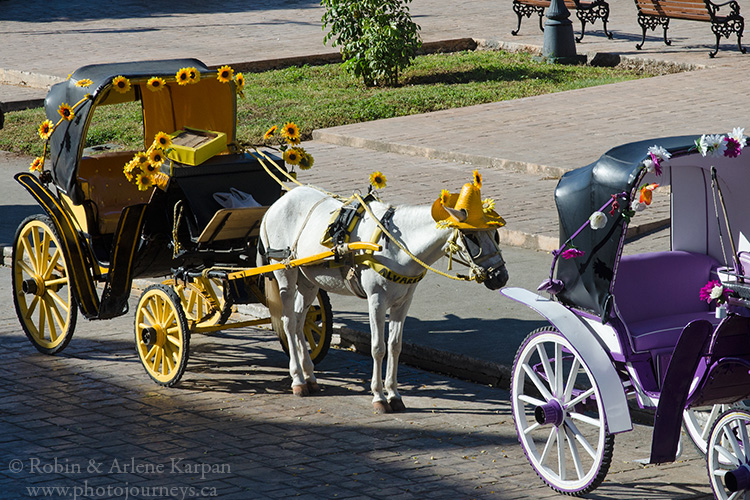 Izamal also has one of Yucatan’s best known restaurants – Kinich Izamal, three blocks north of the monastery. It specializes in traditional Yucatan dishes such as Poc Chuc (grilled pork) and Pollo Pibil, chicken baked in banana leaf. The food was delicious and prices are still reasonable, despite its notoriety.

Just around the corner from the restaurant is the Pyramid of Kinich Kakmo. Measured by the size of its base, it is the largest pyramid in the Yucatan Peninsula and among the largest in Mexico. If you have visited other prominent Mayan sites, such as Uxmal or Chichen Itza, this will seem rather anticlimactic. Despite its size and importance, the pyramid is mostly unexcavated and not restored. However, it’s still worth seeing and admission is free.

While you can get to Izamal from various places around the Yucatan Peninsula, the easiest transport is from Merida, with several buses per day. The bus takes an hour and a half or so, depending on traffic and the number of people getting off and on. We took the bus (28 Pesos or about $2 CDN) from the Noreste Terminal in Merida on Calle 67, between Calles 50 and 52. Collectivo vans also operate, which are much quicker but cramped if you’re much more than five feet tall. We’re quite willing to put up with a bit longer trip for the extra legroom. To return, Izamal has two bus stations run by different companies – The Noreste Terminal is a block west of the market, with another station immediately south of the market.

It’s easy to visit Izamal on a day trip from Merida. However, we decided to spend the night and were glad we did. We stayed at the Posada Ya’ax Ich (525 Pesos, about $36 CDN), a nice small hotel a short walk from the centre. There aren’t a huge number of tourists in Izamal at any time, but in the evening the tour buses are long gone. Evenings are fairly quiet, with mostly locals and the odd visitor wandering around. The convent and archways around the atrium are lit up, giving the place a warm, magical feel, and a great place to play around with night photography. 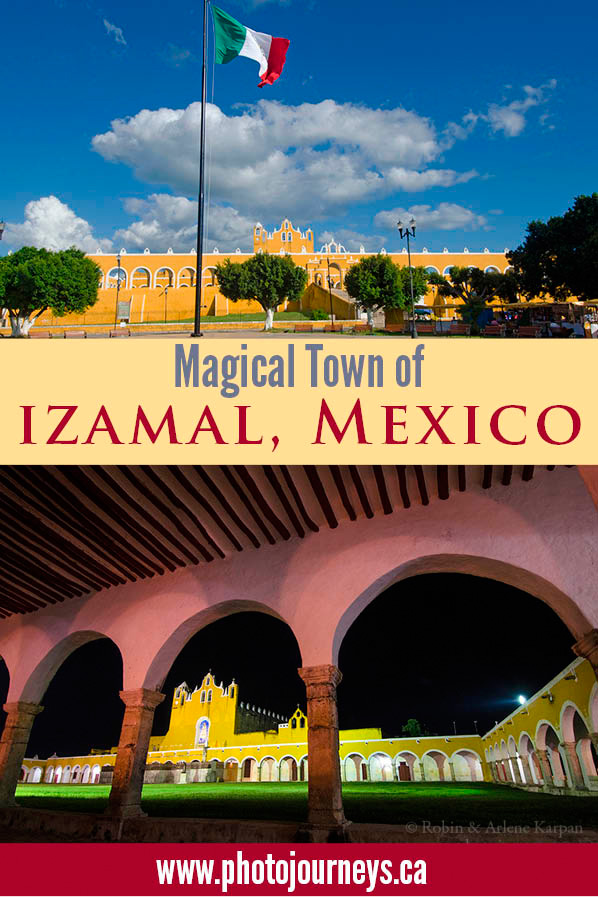