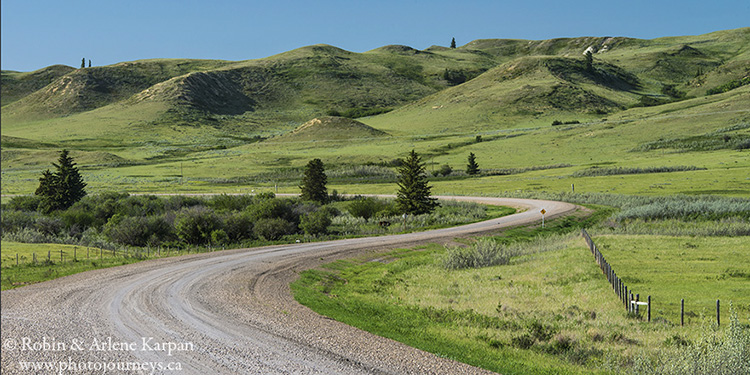 Brady Coulee Road in the Cypress Hills north of Eastend

Saskatchewan is tailor-made for backroad exploring. We have more roads than any province in Canada—enough to circle the equator four times. Possibilities are mind-boggling, from drives through spectacular river valleys to sweeping natural grasslands, lake-studded boreal forest, wild badlands, some of Canada’s largest sand dunes, breathtaking viewpoints, little-known hideaways, and historic treasures. 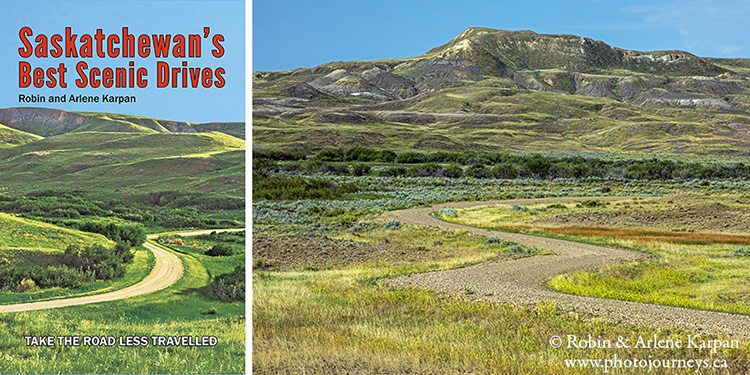 A spectacular backroads route through Grasslands National Park is one of many road trips in our new travel guide.

That’s the theme of our popular book, Saskatchewan’s Best Scenic Drives, a guide to some of the most spectacular road trips throughout the province. The book is filled with precise directions, detailed maps, GPS coordinates where needed, and plenty of eye-catching colour photos to show you what’s in store. Here is a summary of three road trips in southern Saskatchewan that you shouldn’t miss.

When it comes to scenic drives in Saskatchewan, it’s hard to top the Cypress Hills. Rising from the surrounding plains, the upper reaches of the Cypress Hills remained untouched by glaciers during the last Ice Age, leaving some of the highest land in Canada between the Rockies and Labrador. 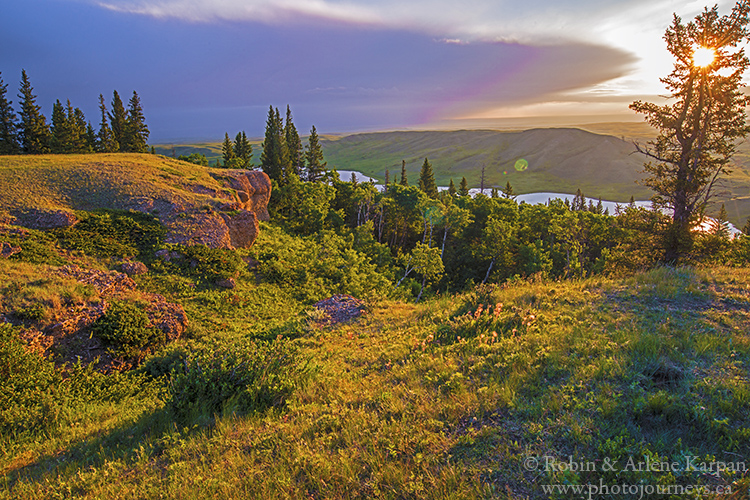 Sunrise at the Conglomerate Cliffs

While situated in the prairies, the Cypress Hills have a lot in common with the northern forest and with the foothills of the Rockies. The cool climate, thick stands of white spruce and lodgepole pines, along with wildlife such as moose and elk, impart a northern feel to the hills. The unique combination of prairie and alpine habitat makes for incredible wildflower displays, with species representative of what you might find in the foothills of the Rockies, growing beside grassland species.

Cypress Hills has some of the most dazzling wildflowers on the prairies.

In Saskatchewan, the Cypress Hills consist of three major areas. The Centre Block of Cypress Hills Interprovincial Park, straight south of Maple Creek, is the most visited part because most visitor services are here, from full-service campgrounds to resort accommodation, pool, restaurants, and golf. A loop driving route circles the Centre Block, with access to highlights such as the Lookout Point (that’s its official name) where you can see forever, Bald Butte which is exceptional for sunset, plus hiking trails and hotspots for wildflowers. 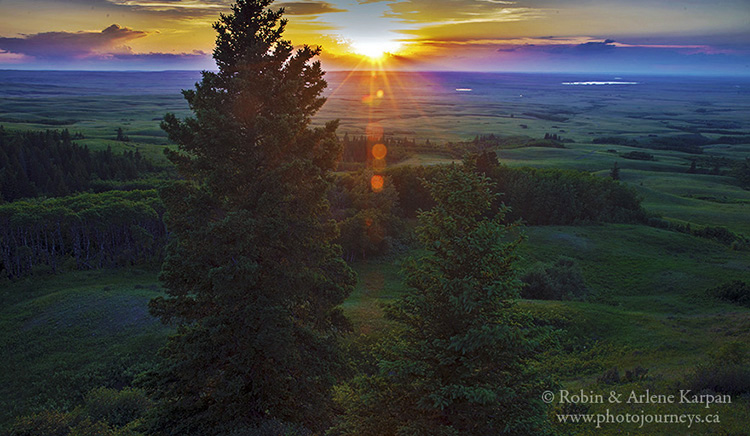 Sunset from atop Bald Butte in the park’s Centre Block. 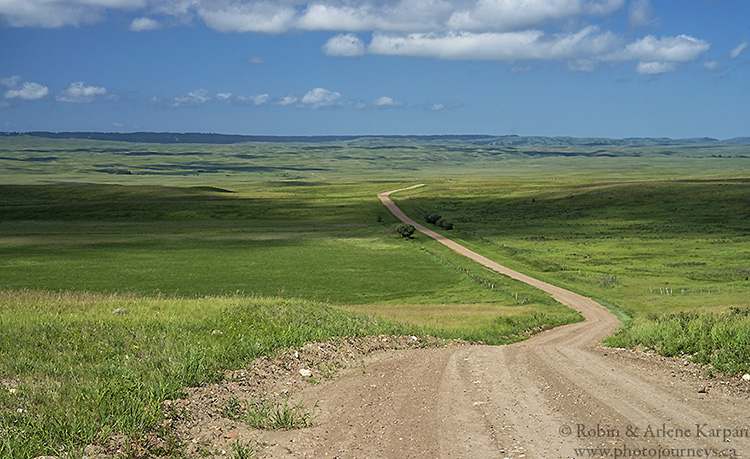 The Gap Road across pastureland links the Centre and West Blocks of Cypress Hills Interprovincial Park.

The West Block of the park, next to the Alberta border, is perfect for those wanting to get off the beaten path. The only accommodation options are basic campgrounds, so traffic is light. It’s here, however, that you will find the most impressive landscapes – the Conglomerate Cliffs, the Hidden Conglomerate Cliffs, a beautiful drive along Battle Creek, and fabulous viewpoints galore. Fort Walsh National Historic Site rounds out the offerings with one of the most important early Mountie posts, and site of the Cypress Hills Massacre which helped to change the course of Canadian history. 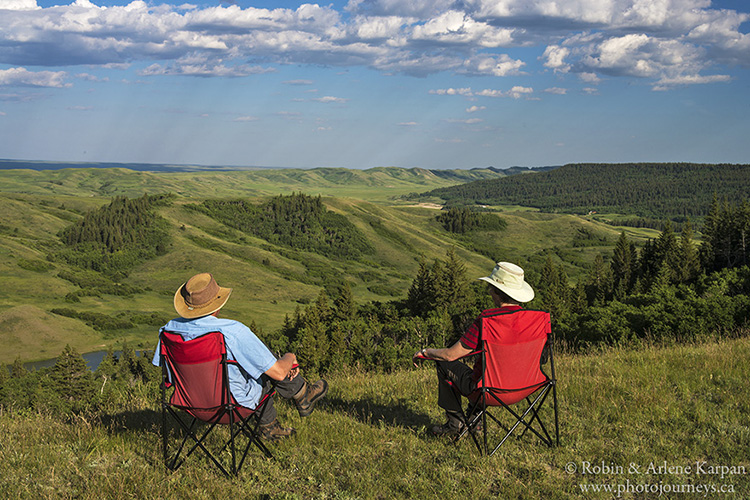 Enjoying the view. Looking over Adams Lake and adjoining valley near the Conglomerate Cliffs lookout. 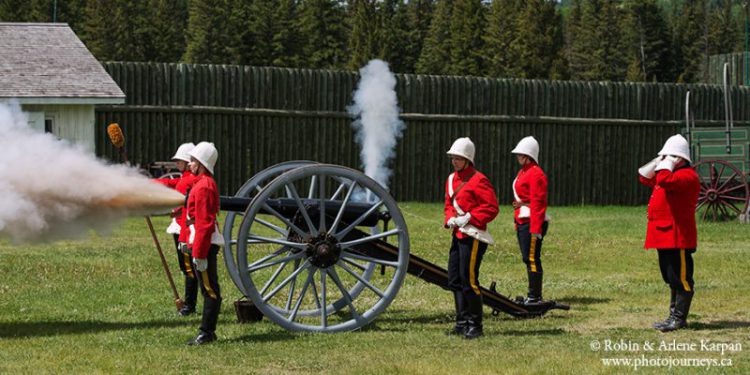 Having a blast at Fort Walsh. Fort Walsh National Historic Site portrays the history of one of the earliest and most significant Mountie posts in Canada, plus the Cypress Hills Massacre, which led to the formation of the Mounted Police.

The area around aptly-named Eastend, at the east end of the Cypress Hills, is the most surprising. Since it is not part of the park, it is less known to visitors, yet the terrain is equally impressive. A highlight is the drive along the Frenchman River between Eastend and Ravenscrag, where badland-like hills line the valley. Other scenic route include Middle Bench Road higher into the hills, Brady Coulee Road which winds through gorgeous valleys and hills, and backroad routes to picture-perfect Pine Cree Regional Park. In the book, we give all the directions to links all these parts of the Cypress Hills into a fabulous grand tour that can keep you exploring for days. 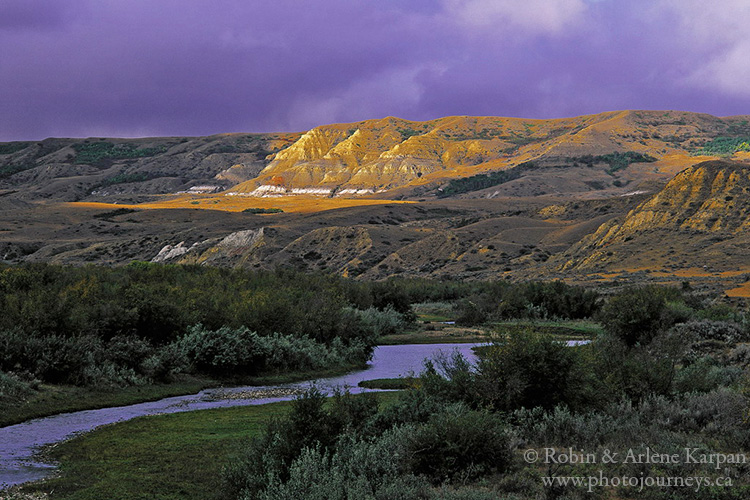 The Frenchman River Valley between Eastend and Ravenscrag.

Grasslands National Park and the surrounding area offers some of the most spectacular scenic drives in the province. Stretched along Saskatchewan’s southern border, the park consists of two separate blocks – The West Block near Val Marie and the Frenchman River Valley, and the more remote East Block, famous for its magnificent badlands. With large tracts of undisturbed grassland, bountiful wildlife, and non-stop panoramic views, it’s an area that begs to be explored. 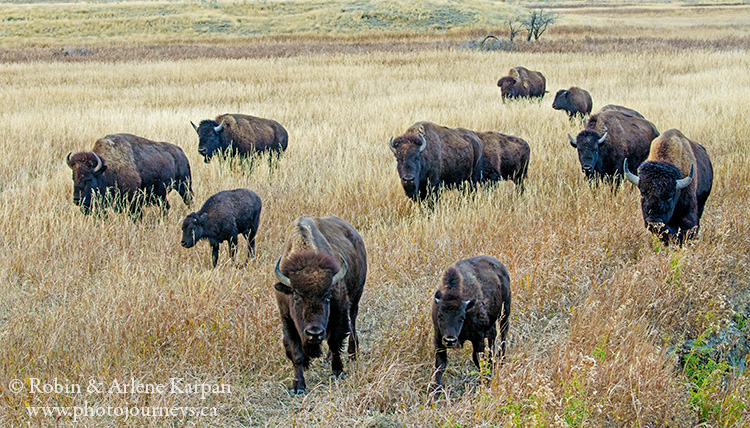 A home where the buffalo roam.

This is the wild prairie at its finest – a home where the buffalo roam and the deer and the antelope play – plus a host of other critters from coyotes to ferruginous hawks, burrowing owls, long-billed curlews, sage grouse, rare eastern short-horned lizards, and the only black-tailed prairie dogs in Canada. 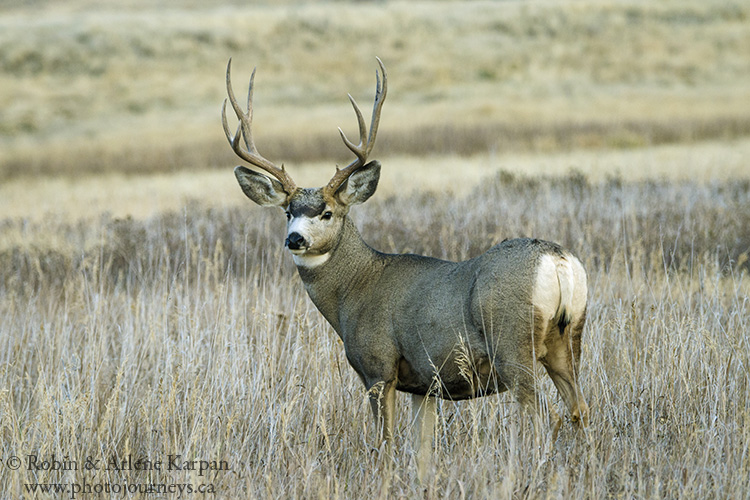 The West Block, southeast of Val Marie, encompasses rugged, deeply incised coulees, wildly beautiful buttes, and the wide Frenchman River Valley. Driving routes include a relatively short trip south of Val Marie to the 70 Mile Butte area, and longer trips into the Frenchman River Valley that can be can be combined into wonderful loop trips. From the eastern end, you can access backroads that make a great short-cut route to the park’s East Block.

The East Block is mostly about badlands – some of the baddest you’ll find anywhere. The drive along the valley rim to the badland lookout is among the top drives in Saskatchewan. We look down over weathered buttes, eroded gullies, steep hillsides, hoodoos, and wooded coulees. Depending on the light, you might see colours ranging from chocolate browns and sandy beiges to shades of gold, rust, and creamy white. In a high rainfall summer, the normally arid slopes turn green and are covered in wildflowers. Since it is a short drive from the park’s Rock Creek Campground, it’s easy to come here for sunrise or sunset. 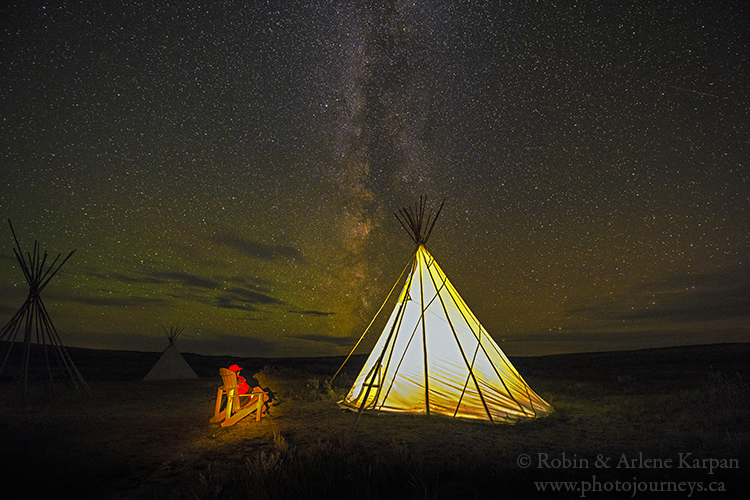 A nice part of visiting the East Block is that it’s not just the park itself that’s worth visiting, but the surrounding countryside as well. The area roughly bordered by Grasslands National Park East Block, Wood Mountain, and Rockglen is a marvelous place for backroad exploring. In the book, we have mapped out various routes in this area that will take you through some surprising scenery with extremely little traffic.

Did you know that you can drive over a third of the way across Saskatchewan and never leave the beautiful Qu’Appelle Valley? In our book, we’ve mapped out how to do it, using a combination of major paved and gravel roads, plus a few sections of lonely “dry weather only roads” with next to no traffic. The scenery is suburb throughout,with mostly grassland hills and wooded coulees on the north side and forested slopes on the south, and the usually quiet Qu’Appelle River meandering across the valley floor. The eastern stretches are marked by stands of Bur Oak, some of North America’s most northerly oak trees. 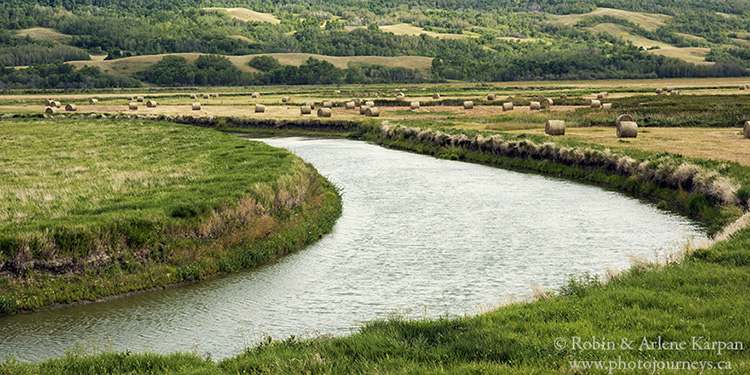 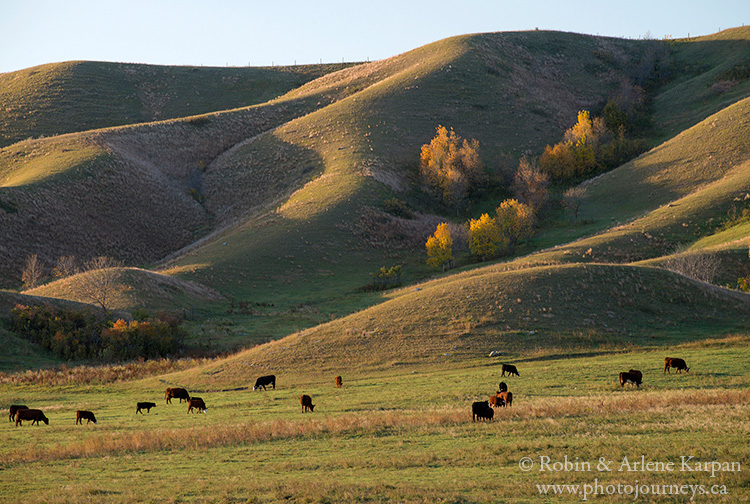 Along the way, you pass through picture-perfect small communities such as Tantallon, historic Lebret, and tiny Ellisboro, plus provincial parks and recreation sites where the river widens into lakes. History abounds. The Qu’Appelle River was important to the early fur trade, with places such as Fort Esperance, Fort John, and of course, Fort Qu’Appelle, now the valley’s largest community. A lonely spot marks the site of Hamona – Saskatchewan’s first co-operative, established in the late 1890s. 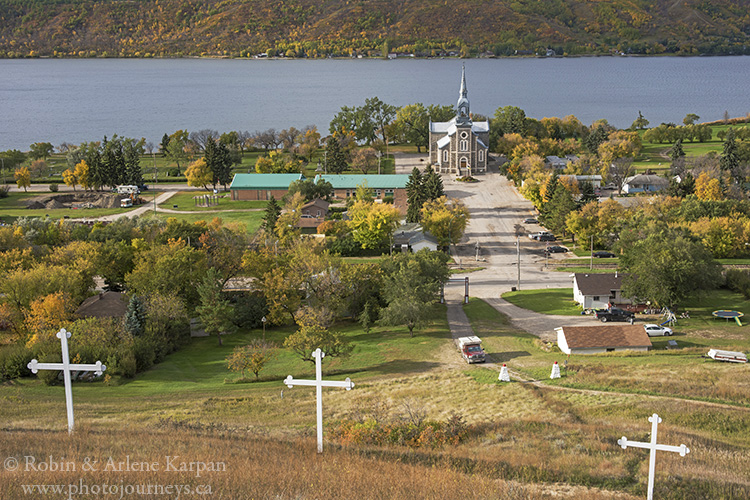 Historic Lebret is one of the older communities in the Qu’Appelle Valley. 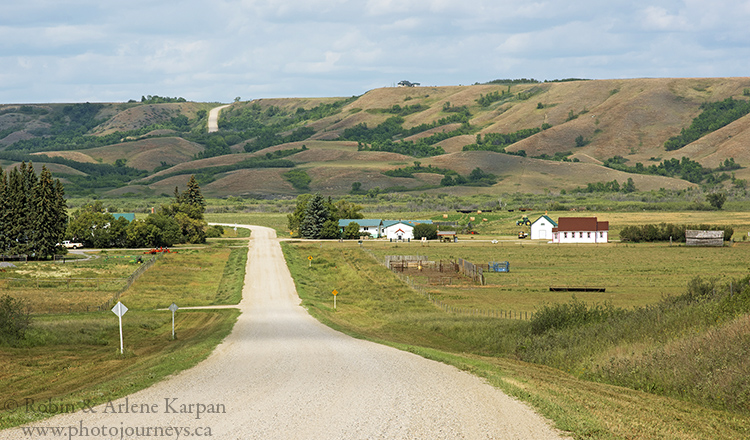 The tiny community of Ellisboro

While you can stay in the valley the entire way from the Fishing Lakes near Fort Qu’Appelle to just short of the Manitoba border, there’s also numerous worthwhile sidetrips along the way. In many cases, it’s simply a matter of taking roads into the hills for different views over the landscape. Then there are historic churches, such as the New Stockholm Lutheran Church, famous for its dazzling stained glass windows, or the imposing stone Kaposvar Historic Site, built to serve Hungarian immigrants. A definite highlight is Motherwell Homestead National Historic Site, just north of the valley, paying tribute to W.R. Motherwell who had a major impact on the development of agriculture in the dryland prairie. 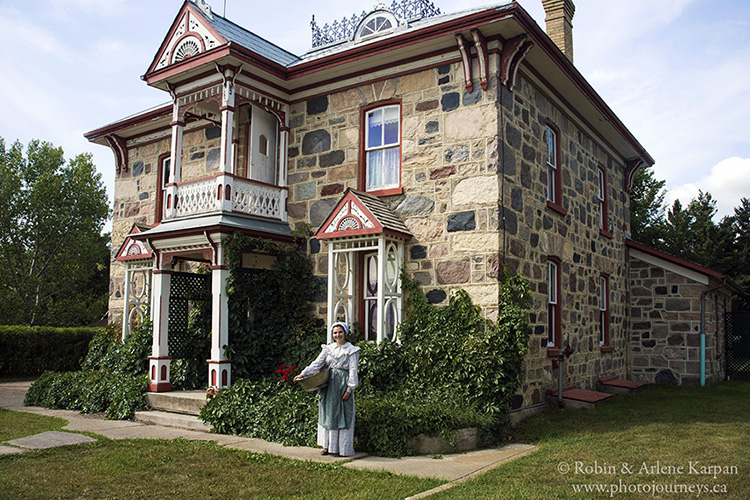 Saskatchewan’s Best Scenic Drives is available in bookstores and select gift shops throughout Saskatchewan. Or contact Parkland Publishing to place your order. 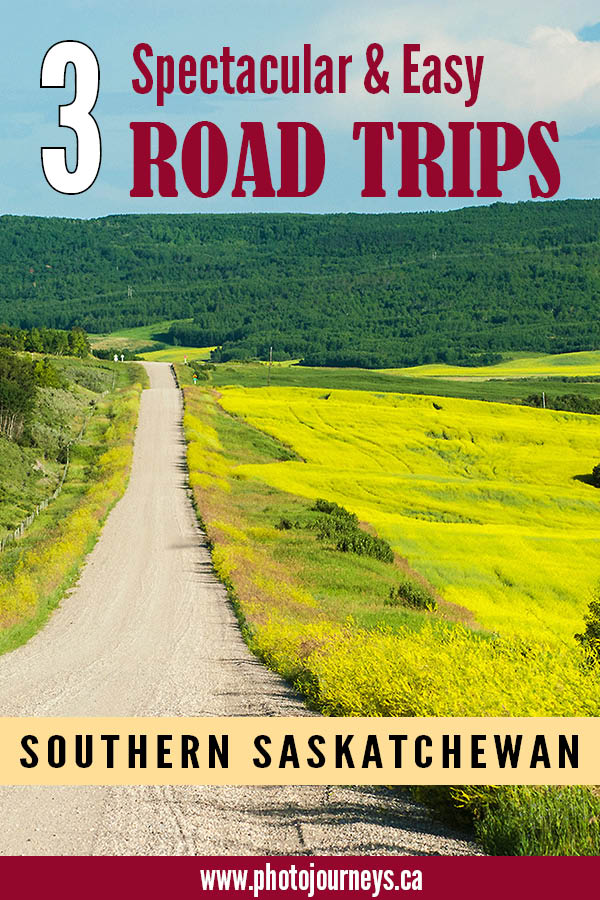