Waterton is a great place to hike, with some 200 km of trails covering everything from challenging backcountry treks to more leisurely day trips. If you haven’t been to this park in southwestern Alberta in a while, expect a few changes. The massive Kenow Fire in 2017 swept through over one-third of the park, damaging much of the infrastructure including several trails. Many trails have since been rebuilt, though some have only recently reopened. The best news is that you don’t have to go far afield to enjoy some of Waterton’s top hiking destinations. Here are 3 of our favourite hikes that are short and easy but big on awesome landscapes.

If you do only one hike in Waterton, this should be it. Named for the mountain shaped like the hump on the back of a grizzly bear, this is not only the most famous hike in Waterton, it is among the top short hikes anywhere in the Rockies. It’s only 2.8 kilometres return and not difficult, though it’s a steady, steep climb with a 225-metre elevation gain. Expect a bit of huffing and puffing on the way up.

This trail was especially hard hit in the fire, and it only reopened this summer. When we walked it a few years ago, we were in forest much of the way, but now it is fairly open though the understory is greening up quickly. Partway up we look down over the iconic Prince of Wales Hotel which is just across the road from the trailhead.

The top provides a breathtaking view over the townsite, the Waterton Lakes, and the mountainous wilderness beyond. To the south, we can look into Glacier National Park in Montana. Turn around to look the other way and we can see prairie grasslands. It’s a great place to get a feel for a unique aspect of Waterton’s landscape. Unlike farther north in the Rockies where foothills provide a transition between the prairies and mountains, here the change is more abrupt. This is an important factor contributing to the park’s tremendous biodiversity.

The trailhead is at a parking lot along the main highway just outside the townsite, across from the access road to the Prince of Wales Hotel. Prime time for photography is late afternoon or early evening, depending on the time of year, when the lower sun casts a flattering light over the landscape.

The walk is 5.2 km return with an elevation gain of 175 metres. The trailhead is along the road past Cameron Falls, near the campground in the townsite. It starts with a gradual climb as we head south along the lakeshore with views over the beach area on the south end of the townsite. As we gain altitude, there are some excellent sweeping views over Lower Waterton Lake.

Eventually the trail turns inland through picturesque valleys. Most of the forest has been burned here, however it is greening up nicely with lots of wildflowers along the way. For photographs, don’t overlook burned areas which can be quite striking.

The burned area ends just before Lower Bertha Falls, with lots of lush vegetation framing the falls. These so-called “bridal-veil falls” are especially beautiful, with wispy strands of water cascading over the colourful rocks. We arrived at the falls around midday. While this is not usually the best time of day for photography, at least there was reasonably even light on the falls. Much later in the afternoon on a sunny day, the falls would be in part sun and part shade, making it even more challenging for photography.

If you want a longer excursion, the trail continues farther towards Upper Bertha Falls and Bertha Lake. However, the bridge was out during our visit, so hikers would have to take a detour along the horse trail to reach the lake.

While these are technically two different trails, they are next to each other and convenient to do in the same visit. The Red Rock Canyon is only a 0.7 km loop, while Blakiston Falls is 2 km return. Both are very easy.

When you drive to the end of the Red Rock Parkway, there are two parking lots – the upper one and the lower one which you reach first. We would suggest stopping at the lower lot, walking along the east side of Red Rock Canyon, crossing the bridge, then coming back along the west side of the canyon which brings us to the trailhead for Blakiston Falls.

Red Rock Canyon is Waterton’s star attraction. Made of iron-rich red argillite, the rocks are an almost unreal pinkish-red. It’s also one of the most popular parts of the park, usually with a lot of people around. To avoid the crowds, go either late or early in the day. However, this creates a bit of a dilemma for photography. If you go too early or too late, the canyon will be in shade. The wild red colours are at their most brilliant when the sun shines through the shallow creek, and this means visiting closer to the middle of the day.

The trail to Blakiston Falls is an especially pleasant walk. Though the forest has been burned here, this was one of the best areas in the park we found for spectacular stands of fireweed. The contrast between the flowers and greenery against the blackened tree trunks can make for some striking scenes.

The impressive waterfall has several viewpoints thanks to some recently constructed stairways and viewing platforms. It’s also worthwhile exploring a bit upstream from the falls where you can get close to some smaller drops in the river where the rocks are quite colourful.

For other things to do in the park, check out our posting The Best of Waterton Lakes National Park and our posting on enjoying and photographing Waterton’s night sky 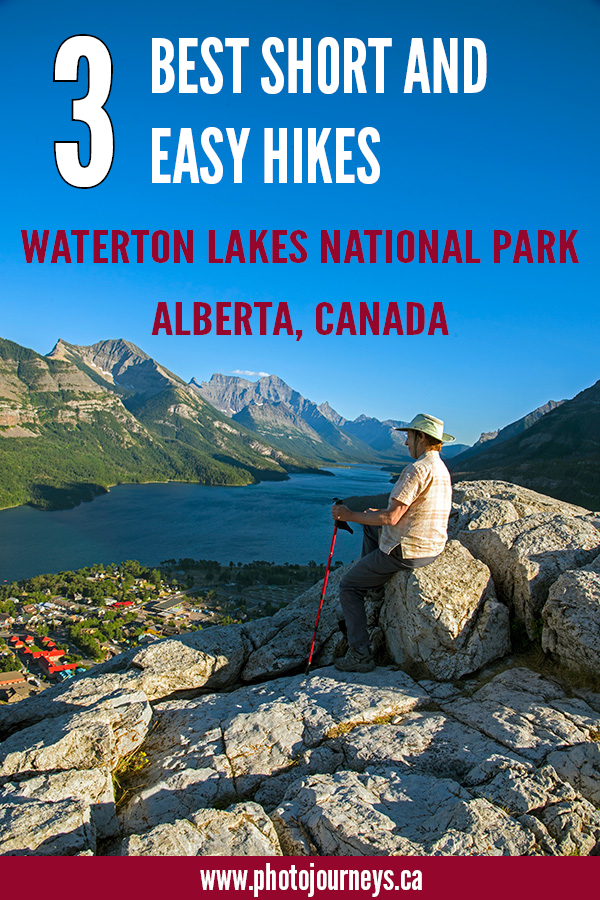