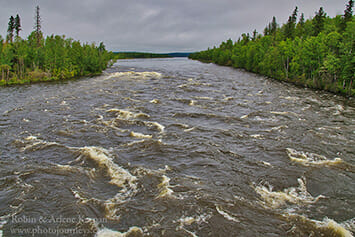 Saskatchewan has seen its share of history. But here are seven places you can visit that were sites of prominent historic events that are not well known, and some are a bit on the unusual side. They involve Sir John Franklin, Peter Pond, combatants, Mounties, politicians, birds, dinosaurs, and a controversial headstone.

This was site of the first fatal mishap on Franklin’s Arctic expeditions. Franklin is best known for his ill-fated Arctic expedition beginning in 1845, where his ships and all crew were eventually lost while searching for the Northwest Passage. But his two earlier Arctic expeditions took place mostly inland, following well-established river routes of the fur trade leading to the Arctic. On Franklin’s first expedition in 1820, they were travelling upstream on the Churchill River. When they tracked the canoes through Otter Rapids, they lost control of one boat which capsized. One of the two men in the boat managed to make it to shore, but the other disappeared and was never seen again.

Getting there – Otter Rapids is about 85 km north of La Ronge along Hwy 102. A bridge crosses the rapids, and has a pedestrian walkway where you can have a close view of the frothing rapids.

It was the dying days of the 1885 Northwest Rebellion/Resistance. The Canadian militia was pursuing members of Cree Chief Big Bear’s band, led by their war chief Wandering Spirit. The Cree had earlier killed civilians at Frog Lake, taken hostages, and forced the Mounted Police to withdraw from Fort Pitt. When the militia arrived, an indecisive battle occurred at nearby Frenchman Butte. Then on June 3, a skirmish took place at the narrows of Makwa Lake between some of the Cree and Steele’s Scouts, led by Major Sam Steele of the North West Mounted Police. This was to be the last battle of 1885 and the last military engagement to take place on Canadian soil.

Getting there – Head west from the town of Loon Lake. The road crosses Steele Narrows, named after Sam Steele. Now an historic site, there are interpretive panels and a lookout over the narrows.

A headstone in the Bienfait Cemetery claims that the three men buried here were “murdered by RCMP”. On Sept. 29, 1931, a violent confrontation broke out in nearby Estevan between striking coal miners and the RCMP, leaving three miners dead and several miners and police injured. Miners were seeking better working conditions and higher wages but were parading illegally. The miners took the view that the RCMP was acting on behalf of the mining companies. Sentiment over the event and controversial headstone remained high for many years, with the word “murdered” having been both obliterated and painted over again. Today, the three men are regarded as heroes of the labour movement.

Now known as the Last Mountain Lake National Wildlife Area, the north end of the lake was first protected in 1887, making it the first federal bird sanctuary in North America. It is considered one of the most productive lakes in southern Saskatchewan for resident wildlife, plus its prime location along the Central North America Flyway attracts huge numbers of waterfowl and shorebirds during migration. During peak migration, up to 50,000 sandhill cranes and 450,000 geese stop here.

Getting there – Starting from Simpson on Hwy 2, head straight east on the grid road and follow the signs to the NWA. A 14-km driving route winds through the area, plus there are walking trails, a viewing tower, and other visitor facilities.

The discovery was made in 1874 by George Mercer Dawson while working on a survey to mark the border between Canada and the United States. The site of the discovery was the badlands that are now part of Grasslands National Park. Over the years these badlands have yielded several other significant fossil finds.

Getting there – The badlands are in the park’s East Block, where a road called Badlands Parkway provides several views over the impressive valley.

The Methye Portage is a 20-km overland route linking Lac la Loche to the Clearwater River. When Peter Pond crossed it in 1778 he realized the potential for the fur trade. Lac la Loche is at the headwaters of the Churchill River which flows to Hudson Bay, while the Clearwater River is part of the Mackenize River watershed flowing to the Arctic Ocean. Here was a land bridge linking two oceans, opening vast areas of the north to the fur trade, and providing a route for a who’s who of northern exploration, the likes of Sir John Franklin and Alexander Mackenzie.

Fort Livingstone operated as the first capital of the Northwest Territories in 1876-1877 while the permanent capital was being built at Battleford. The Fort was founded in 1874, shortly after the March West of the newly formed North West Mounted Police and became the first headquarters of the NWMP. Fort Livingstone’s heyday was short-lived as Mountie headquarters were moved to Fort McLeod in 1876 and the capital moved to Battleford in 1878. Today, Fort Livingstone National Historic Site is best known for its huge garter snake hibernaculum which comes alive with thousands of mating snakes every spring. For more on the snakes, see the article Snake Orgy at Fort Livingstone.

Getting there – Head straight north of the village of Pelly and follow the signs to the historic site, next to the Swan River. 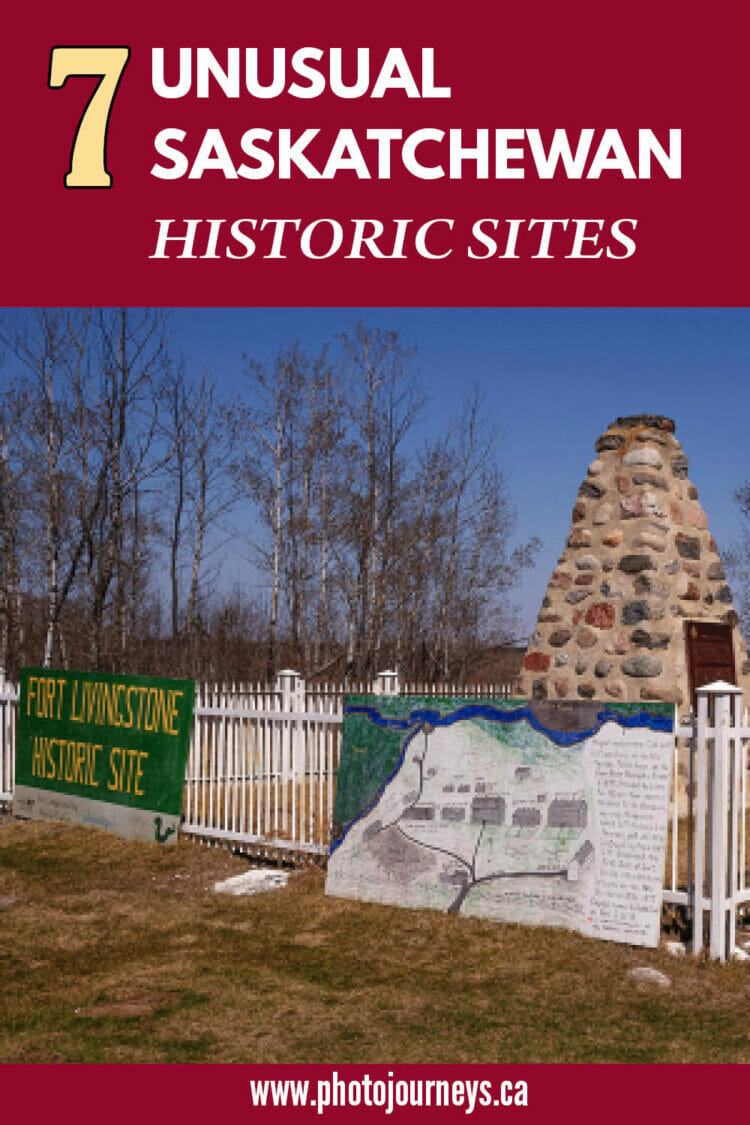